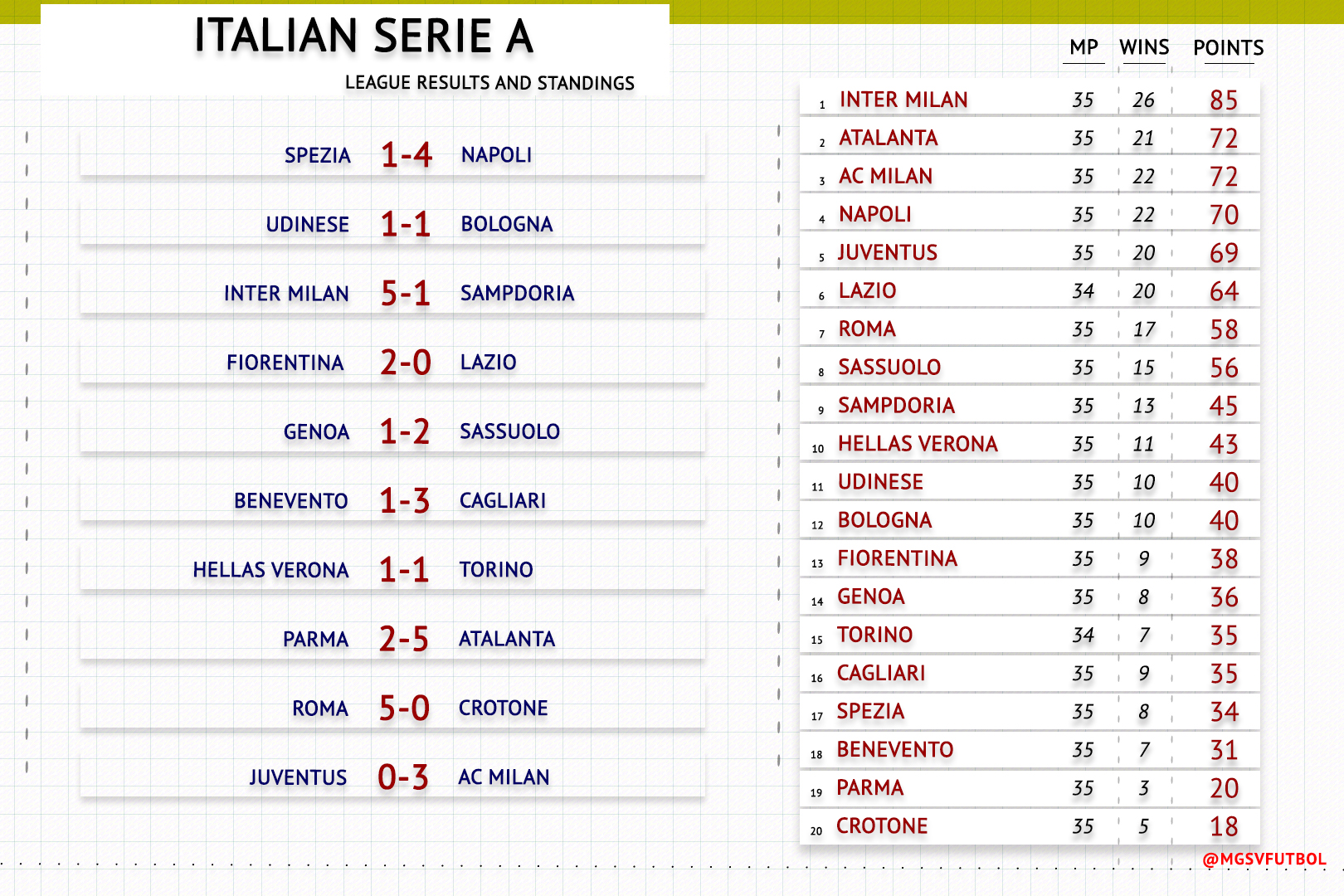 Three more rounds of the season to be played.
One more spot left on the relegation list. Three points left on the Champions League qualification list.

The three teams in the relegation zone stayed unmoved after all (three) were on the wrong end of the score in this round.
Benevento was the only side in the relegation zone that needed the points to make a difference to the outcome of their season.
Cagliari helped their survival odds with a win against Benevento.

Inter Milan do not need any more points but added some extra points to their tally for sporting records.
The battle for Champions League football remains tight between the four teams in position for qualification.
AC Milan gave themselves a boost with a 3-o win in Turin against Juventus. The result moved them up to third in the standings while also dragging Juventus to 5th.
Napoli used a win against Spezia in the opening game of the round to book a place in the ‘top 4’.
Atalanta kept up with Inter Milan by also getting 5 goals and a win to keep hold of second place. Luis Muriel moved up to 21 goals.

Goals from Piore Zielinski and Hirving Lozano sandwiched the two goals from Victor Osimhen in Napoli’s 4-1 win against Spezia. With Champions League football on the line, these are wins Napoli must get.
Riccardo Orsolini scored from the penalty spot in the 82nd minute to get Bologna a point against Udinese. Both teams stay on equal points (40) with three more rounds of the season to be played.
Inter Milan celebrated their title win with a 5- thrashing of Sampdoria. Alexis Sanchez scored two; with both of his goals getting Inter Milan a 2-goal lead.
Lazio’s advantage of having a game in hand was wasted in a 2-0 defeat against Fiorentina. Dusan Vhlahovic scored both goals for Fiorentina.

Sassuolo opened a 20-point gap on Genoa with a 2-1 victory.
Benevento suffered a 3-1 home defeat to Cagliari.
The goal came in the final 10 minutes; one for Torino and the other for Hellas Verona.
Atalanta tightened their grip on second place through a 5-2 win against Parma.
Rome ended a run of 4 league matches without a win by thrashing a relegated Crotone 5-0. Borja Mayoral and Lorenzo Pellegrini were on the score sheet twice.
AC Milan had their first away win in the league against Juventus in 10 years.