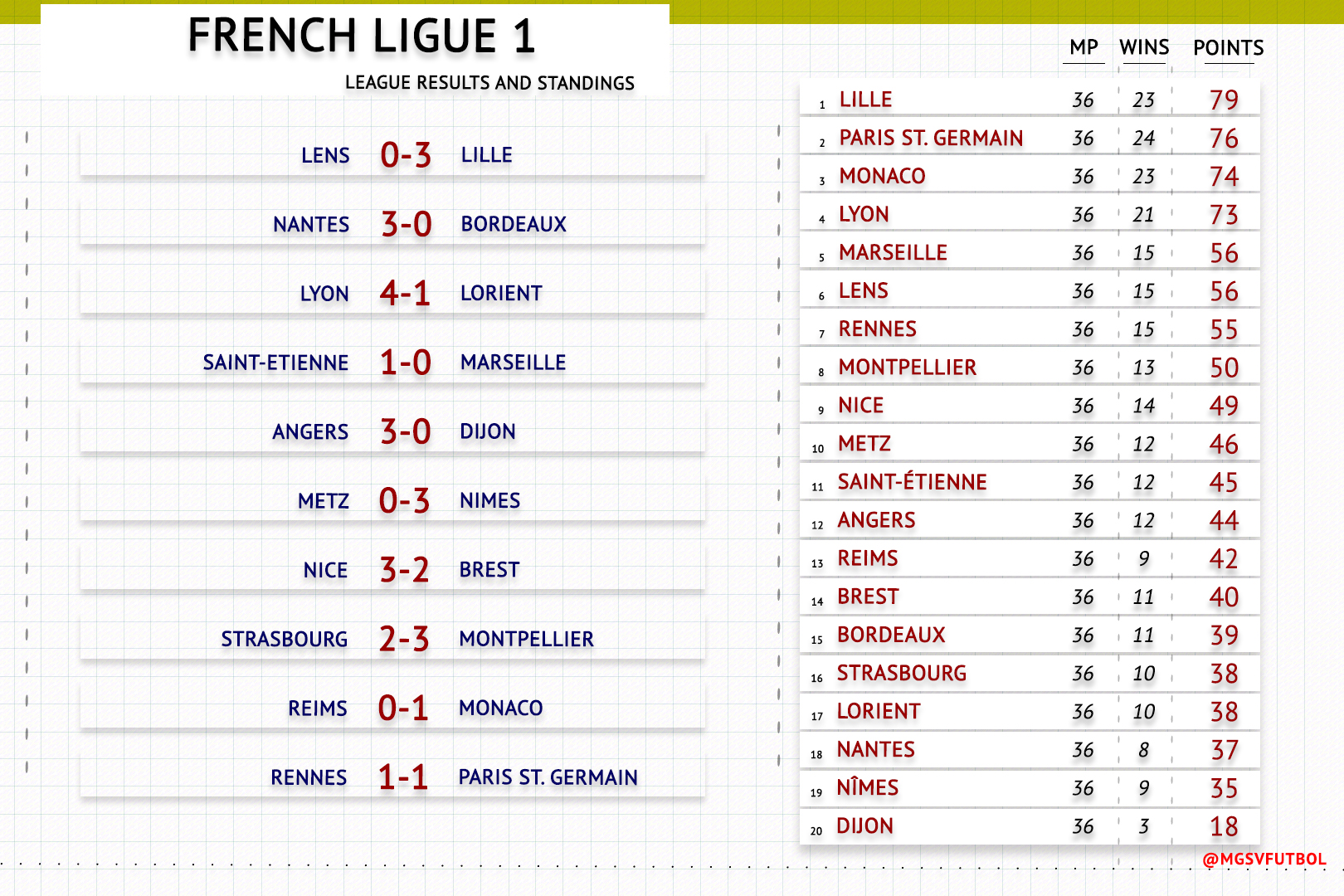 Lille are a win away from winning the French Ligue 1 title.
Lille played the opening game of the round and ended with a 3-0 away victory against Lens, while Paris St. Germain played the closing game of the round to finish in a 1-1 away draw against Rennes.
With two games left and a 3-point lead in the title race, Lille are a win away from being the 2020/21 French Ligue 1 champions.
Monaco are two points from second place, while Lyon are three points from 4th.
Two games left with all to play for, and nothing is guaranteed for the four teams at the top of the Ligue 1 standings and also at the bottom end of the standings.

The most points Nimes can get is 41, and Nantes 43.
In their next two games, they will both need to get the victories to put pressure on the teams directly above them in the relegation battles.

Nimes will host Lyon and then away to Rennes.
Nantes can add to their winning streak of three when they take on relegated Dijon in the next round and then host Montpellier in the last round of the season.

On paper, Nimes are likely to go out while Nantes will keep the relegation-playoff spot (at least).

As long as Lille get the wins from their remaining fixtures, there is nothing the other title-contending teams can do to stop them from being league champions. Lille took three points from a 3-0 win at Lens. Burak Yilmaz’s first-half brace sent them on their way to victory.

Three straight wins after three straight defeats for Nantes. They beat Bordeaux 3-0.
Lyon followed up their win against Monaco with a 4-1 victory against Lorient.

Saint-Etienne made it successive wins after a 1-0 win against Marseille. Arnaud Nordin’s goal at the end of the half lead Saint-Etienne to the win.
Relegated Dijon secured their 24th defeat in their 36th game. Their 3-0 defeat against Angers was also the result that got Angers to end a run of 4 straight league defeats.
Steve Mounie scored two goals to get Brest a 2-1 lead at the half, but a 10-man Nice managed to find a winning second half to make it a 3-2 win at the end. Hassane Kamara scored the winning goal for Nice in the final minute of regulation time.

Relegation-zoned Nimes helped their battle for survival with a 3-0 away victory at Metz.
Strasbourg did their best to get something out of the match but ended up a goal short of a point. Strasbourg lost 2-3 at home against Montpellier. The result ended a streak of two losses for Montpellier while stretching Strasbourg’s winless run to 5 league games.
Monaco got back to a win after their defeat to Lyon through a 1-0 away victory over Reims.
Paris St. Germain dropped points against Rennes to give Lille a massive advantage.