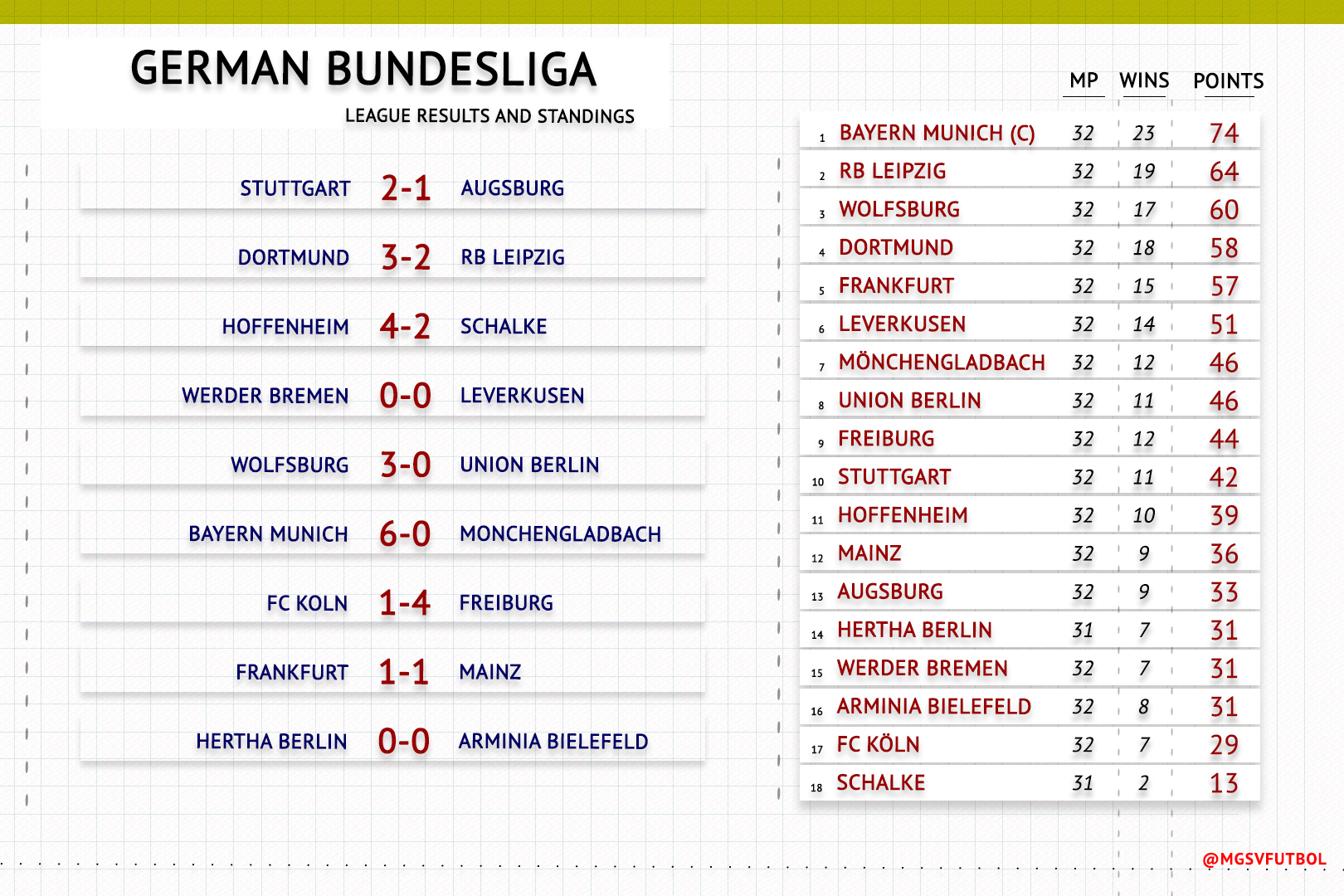 Bayern Munich are defending champions with two games to spare.
RB Leipzig, Wolfsburg, Dortmund, and Frankfurt are in the running for the three Champions League spots left.

RB Leipzig have Champions League football in the bag but they let themselves down with a defeat against Dortmund.
Dortmund are back in Champions League qualifying position by taking 4th spot and can still finish 4th should other results help.
Frankfurt dropped a position to 5th after their defeat to Mainz.

In the relegation battle.
Relegation-zoned FC Koln are two points from the relegation-play off spot which is currently occupied by Arminia Bielefeld.
Arminia Bielefeld are equal on points with Werder Bremen and Hertha Berlin, but Hertha Berlin has a game in hand to open a 3-point lead that will see them equal points with Augsburg.
FC Koln’s maximum number of points achievable is 35 points. Mathematically, all the teams mentioned are still within their reach.

Stuttgart opened a 9-point gap on Augsburg after a 2-1 victory.

Jadon Sancho’s second goal of the match restored Dortunmd’s lead for them to go on and win 3-2 win against RB Leipzig despite throwing away a 2-goal lead. The result was exactly what Dortmund needed to help their odds of securing Champions League football next season. The result also made Bayern Munich league champions before they took to the field.
Relegated Schalke showed why they are relegated. Schalke blew away a 2-0 first-half lead by conceding a double in the second half to lose 4-2 away against Hoffenheim. It almost took the entirety of the first half for Schalke to get their two goals, compared to the less than 20 minutes it took for Hoffenheim to get up two goals.

Werder Bremen held on to a point at home in a goalless draw with Leverkusen. The goalless draw was an end to a 7-match losing streak in the league for Werder Bremen.
Josip Brekalo scored three goals to get Wolfsburg a 3-0 win against Wolfsburg.
Bayern Munich took to the field as league champions and showed why they were. Robert Lewandowski moved a goal away from Gerd Muller’s record of most goals in a season. Lewandowski contributed three goals to the 6 goals Bayern scored to emphasize their dominance.

Freiburg found two goals in the additional minutes to make their victory against FC Koln look more comprehensive. Freiburg bounced back from a 3-0 defeat to Hertha Berlin with a 4-1 win against an FC Koln team that was in desperate need of points to fight relegation.
Frankfurt avoided defeat at home against Mainz but didn’t get the win to keep them in the ‘top 4’. The best Frankfurt could do after a 3-1 defeat to LEverkusen was a point from a 1-1 draw with Mainz.
Hertha Berlin and Arminia Bielefeld could both not afford to drop points, so they shared them in a goalless draw.