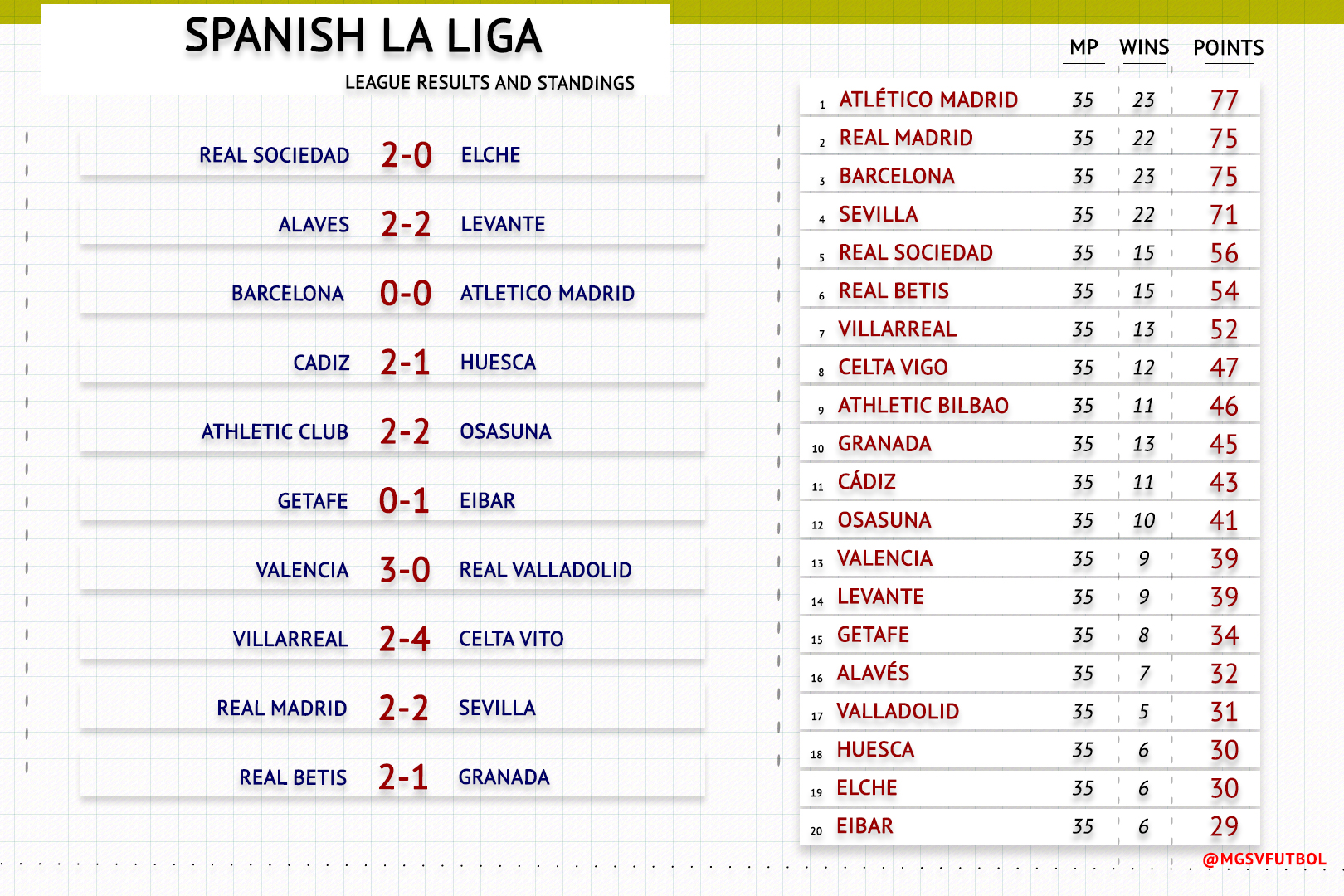 The top 4 teams played against another team in the ‘top 4’ and there was no winner. The gaps remain the same after all four added a +1 to their point tally to keep their position in the league.

Barcelona and Atletico Madrid played out a goalless draw, while Real Madrid and Sevilla shared 4 goals evenly.
With three games left to go, Atletico Madrid have their destiny in their hands. The other three teams will need to pick up victories and hope the results from other games help them.

Real Sociedad kept 5th spot on the lock with a win against Elche.

Three rounds left to go and the relegation avoidance race in the Spanish La Liga is just as exciting as the league title race.
Eibar’s victory over Getafe has opened up the race at the bottom end of the league standings.

Of the 5 teams that are ahead of Eibar in the league, Alaves picked up a point.
With a maximum of 15 points left to go, there is hope and opportunity for bottom table Eibar and the current residents of the relegation zone to get the results to pull themselves out of the zone.

Elche were reduced to 10 men after the opening 10 minutes of the game against Real Sociedad. Despite this, Real Sociedad did not get the winning goal until the 72nd-minute. It finished as a 2-0 win for Real Sociedad and a set of valuable points missed out on by Elche in their battle to survive the relegation.

Levante were denied their first win in 5 games after a late goal got Alaves a 2-2 draw. A draw was enough to end a 4-game losing streak for Levante with a draw. Jose Luis Morales scored two goals to put Levante on a 2-1 lead before the break.

Barcelona and Atletico Madrid played out a goalless game at the Camp Nou.
All the goals came at the end of the opening half for Cadiz and Huesca. Cadiz were first to get in the lead in the 43rd minute and were fortunate to have their lead restored in less than a minute from Rafa Mir’s equalizing goal for Huesca.
Osasuna had to come from a goal down in each half to pick up a point against Athletic Club.


Eibar are making a late push for survival. Jose Recio scored an 89th-minute penalty to get bottom-tabled Eibar a successive league victory through a 1-0 win against Getafe.

Maxi Gomez scored a goal at the end of the first half and not too long after the restart to get Valencia on track to a 3-0 win against Valladolid.

Celta Vigo were 4-2 winners against Villarreal. Villarreal ended the first half 3-1 down and two players sent off on a red card.

Real Betis ended a run of 6 straight draws and closed in on 5th place after Borja Iglesias’s two goals led them to a win against Granada.

Barcelona
vs Levante (A)
vs Celta Vigo (H)
vs Eibar (A)

Sevilla
vs Valencia (H)
vs Villarreal (A)
vs Alaves (H)