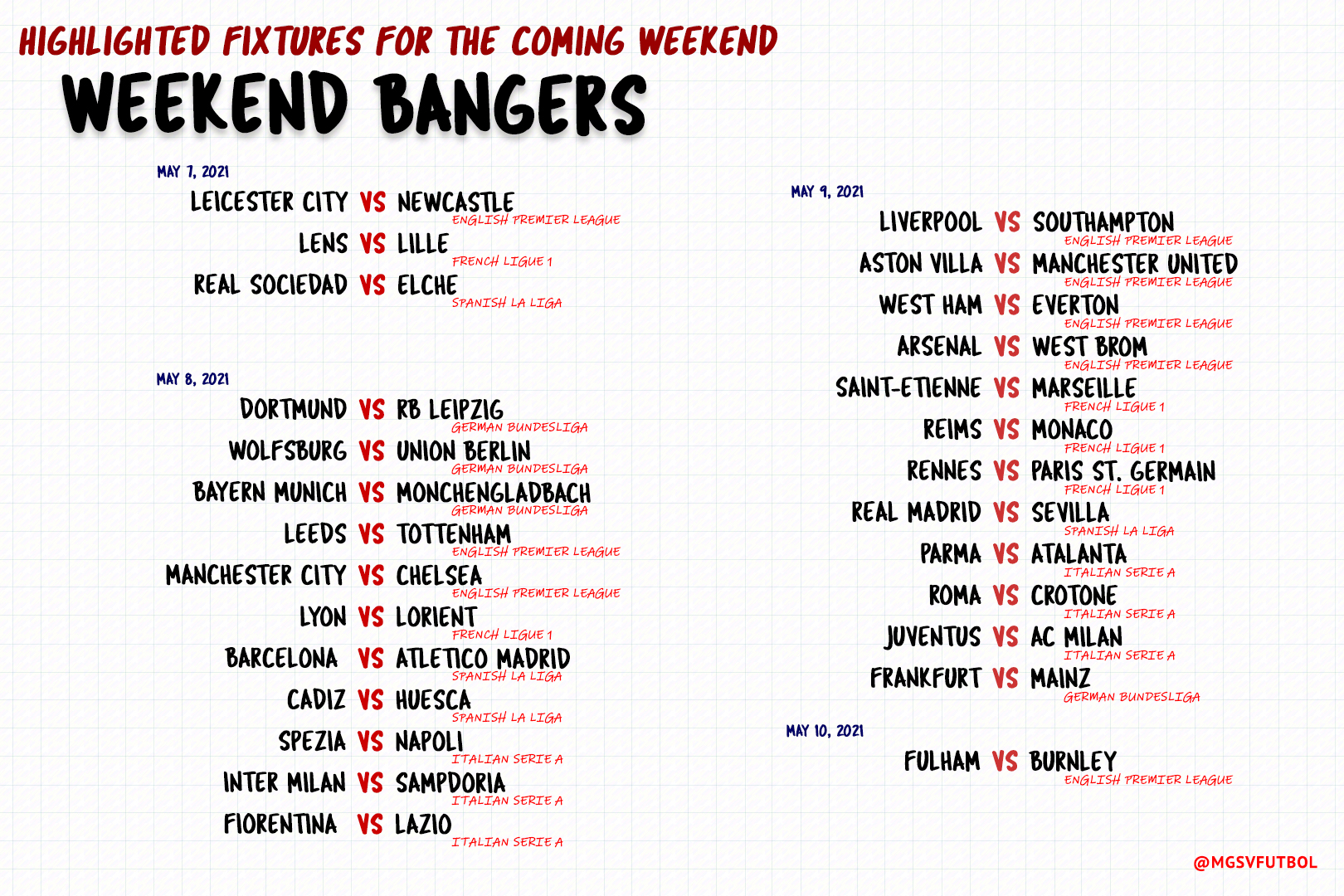 The season is nearing an end in the domestic leagues in Europe.
The German Bundesliga is back with us this weekend with Bayern Munich very likely to be officially crowned Champions (again).

Five teams in the Italian Serie A are in position for the three remaining Champions League qualifying spots – Atalanta, Juventus, AC Milan, Napoli, and Lazio.

Three wins will guarantee Lille the French Ligue 1 title. Any other result will allow the chasing pack to take advantage.

A maximum of 9 points left for each team in the German Bundesliga to fight for their final resting place in the league.

Bayern Munich are 7 points in the lead and might be hosting Monchengladbach as the 2020/21 German Bundeslga champions.
Another win for Bayern Munich or RB Leipzig’s failure to pick up a win at Dortmund will hand Bayern Munich the German Bundesliga title for a record 30th time and the 9th title in a row.

The 2021 DFB-Pokal finalists go against each other.
A win here is important for Dortmund’s hope to be part of next season’s Champions League football. They are currently a point out of a Champions League qualifying spot.

The reverse fixture was a win for Dortmund (3-1). RB Leipzig has not had a win against Dortmund in the last six meetings, with Dortmund having 4 wins.

With a win from their last four league matches, Wolfsburg are losing their grip on Champions League football qualification. They need a win against Union Berlin this weekend or they could be exiting the ‘top 4’. The match that follows is one against RB Leipzig. It will be ideal for Wolfsburg to go into that match three points from this one.

FRANKFURT VS MAINZ
Frankfurt are at the dying end of the ‘top 4’. A victory against Mainz is a necessity.

Manchester City are a game from being crowned the Premier League Champions.

The finalists for the 2021 Champions League meet this weekend for a league tie that could be the game that gets Manchester City to the Premier League title and can also be the way Chelsea gets Champions League qualification through the league.

Chelsea joined the 60+ point group in the last round and any point(s) they pick ensures that they finish the season in the ‘top 4’.

West Ham are hovering around in position for Champions League football qualification in the coming season. They will need to add to their success in the previous round by picking up another three points in this tie.

Everton’s start to the season increased their pre-season expectations to a much higher final position in the standings than that of West Ham. But as things stand, we are watching West Ham making a push for Champions League qualification in the final rounds of the season.

Champions League football qualification is within reach for Leicester City but they are not secure in third place and will need a win against a Newcastle United side that could also use some points for added security for their Premier League status.

Luckily for Leicester, the probability of Manchester City doing them a favor by holding Chelsea from three points is high.

Leicester will increase their odds of picking up a place in next season’s Champions League if they take advantage of the ‘Manchester City vs Chelsea’ fixture with a home victory against Newcastle.

There are many ways Manchester City can be crowned league champions this weekend, and a win isn’t even required if the chasing team (Manchester United) fails to secure the maximum points from their weekend fixture.

Manchester United returns to Premier League football action after their game with Liverpool was forced to be postponed. Manchester United will travel to face an Aston Villa side that are bound to finish mid-table.

Liverpool return to Premier League football action.
They host a Southampton side that is looking for some points to solidify their safety in the Premier League.
The reverse fixture was a 1-0 win for Southampton. It was a result that kicked off a run of poor (home) results for Liverpool.
Liverpool are with a game in hand and 7 points from the Champions League qualifying spot.

With 12 points left in the league, Fulham and West Brom are on the brink of completing the relegation list with Sheffield United.

Even though West Brom are the side that is facing relegation, Arsenal are also desperately in need of a positive result to help patch their midweek pain from the Europa League exit. There is little to no chance of Arsenal playing in a continental competition in the coming season after getting eliminated from the UEFA Europa League on Thurdsay.

As bad as Arsenal have been this season, losing to relegation zoned West Brom isn’t something many can see on the cards. West Brom will go for points to help them avoid the pending relegation. They are currently 10 points from safety.

A win against Fulham is a step in the right direction for a Burnley side that still has work to do to ensure their safety in the Premier League.

Fulham needs the three points from Burnley.
Fulham are without a win since their shock victory at Anfield. They lost 5 of the six games played since.

Tottenham’s are currently 5 points from the Champions League qualifying spot in the league.
They will need a win at Leeds to help them make progress towards their objective.

There isn’t much to lose for both sides, so it should be a fun time.
Inter Milan will kick off their celebration tour at home against Sampdoria.

Atalanta, Juventus, and AC Milan are all on 69 points (each) after 34 matches.
There is a maximum of 12 points left for each teams to secure their position in the final league standings. Any slip-up will be costly when the target for five teams is to take a spot in the three remaining Champions League qualification spots in the league.

Juventus and AC Milan occupy the bottom two spots in the ‘top 4’. They will face each other knowing that Napoli and Lazio are both in a position to take advantage of poor results.
Lazio has a game in hand that can be used to equal Napoli in points accumulated, and that will put both teams 2 points from the ‘top 4’ if the results hold.

Napoli will need to make up for the points they dropped against Cagliari in the last round. Napoli will have the expectation of three points when they go against a Spezia side that are in a relegation battle. Three points to help their odds of Champions League football.
With that said, Spezia were 2-1 winners in the reverse fixture.

Failure to win this tie will likely shoot Lazio out of contention for Champions League football next season. The positive news for Lazio is that the results from the recent meeting of the two will indicate Lazio to be the winner in this tie.

Atalanta takes on a relegated Parma for the points to keep their grip on second place. The reverse fixture was a 3-0 win for Atalanta so they will be hoping for another.

Roma hasn’t had a meaningful victory in their last seven competitive matches. They won midweek in their Europa League semi-final match against Manchester United but lost the overall tie. Hosting Crotone in their next league game could be the ideal game to get Roma out of the slumps.

The reverse fixture was a 3-1 win for Roma but being relegated might be the peace of mind Crotone needs to express themselves on the pitch, and that is not good news for a Roma side that have had 3 defeats and a draw from their last 4 league games.

69 points.
It’s really simple: win and move 3 points clear of your opponent; while keeping yourself in a Champions League qualifying spot on the league table.

The reverse fixture was a 3-1 win for Juventus.
Juventus will be hardening the blow of losing the league title if they fail to secure a Champions League qualifying spot by the end of the season.

AC Milan kicked off the season looking like title contenders but have lost their sparkle in recent weeks. Missing out on Champions League football after the start they had will be a big blow for the players and for the fans.

Barcelona vs Atletico Madrid on Saturday.
Real Madrid vs Sevilla on Sunday.

The teams in the ‘top four’ of the Spanish La Liga standing will be facing another ‘top four’ team this weekend.

Both Barcelona and Atletico Madrid will be looking for a win from this match to help them take advantage of the results from the ‘Real Madrid vs Sevilla’ fixture. A 2-point lead in the title race isn’t enough for Atletico Madrid to afford going without a win and guaranteeing that they keep their place in the league standings.
They will need a win in Camp Nou to (at the very least) keep the 2-point lead in the title race, while opening a 5 point lead on Barcelona.

Barcelona climbed back into title contention in the second part of the season. They blew a great opportunity to take the lead when they lost at home to Granada. Now they face a more difficult task of needing a win here to keep alive the title-winning ambitions.

It was a narrow 1-0 win for Atletico Madrid in the reverse fixture.

Sevilla are coming into this match after ending an 8-match unbeaten streak in which they won 7 games. A defeat at home to Athletic Club in the last round has made 3 points in this fixture more important for Sevilla.
Ideally, Sevilla will like to bounce back and kick off another winning streak instead of making it a consecutive defeat.

The results from the ‘Barcelona vs Sevilla’ fixture will bring Real Madrid to this fixture aware of the required result. Real Madrid knows that completing a season double is a potential ticket to the top of the league table.

On the other end of the league standings, Eibar are hanging by a thread, while Elche, Husea, Valladolid, and Alaves are too close to relegation to find any comfort. 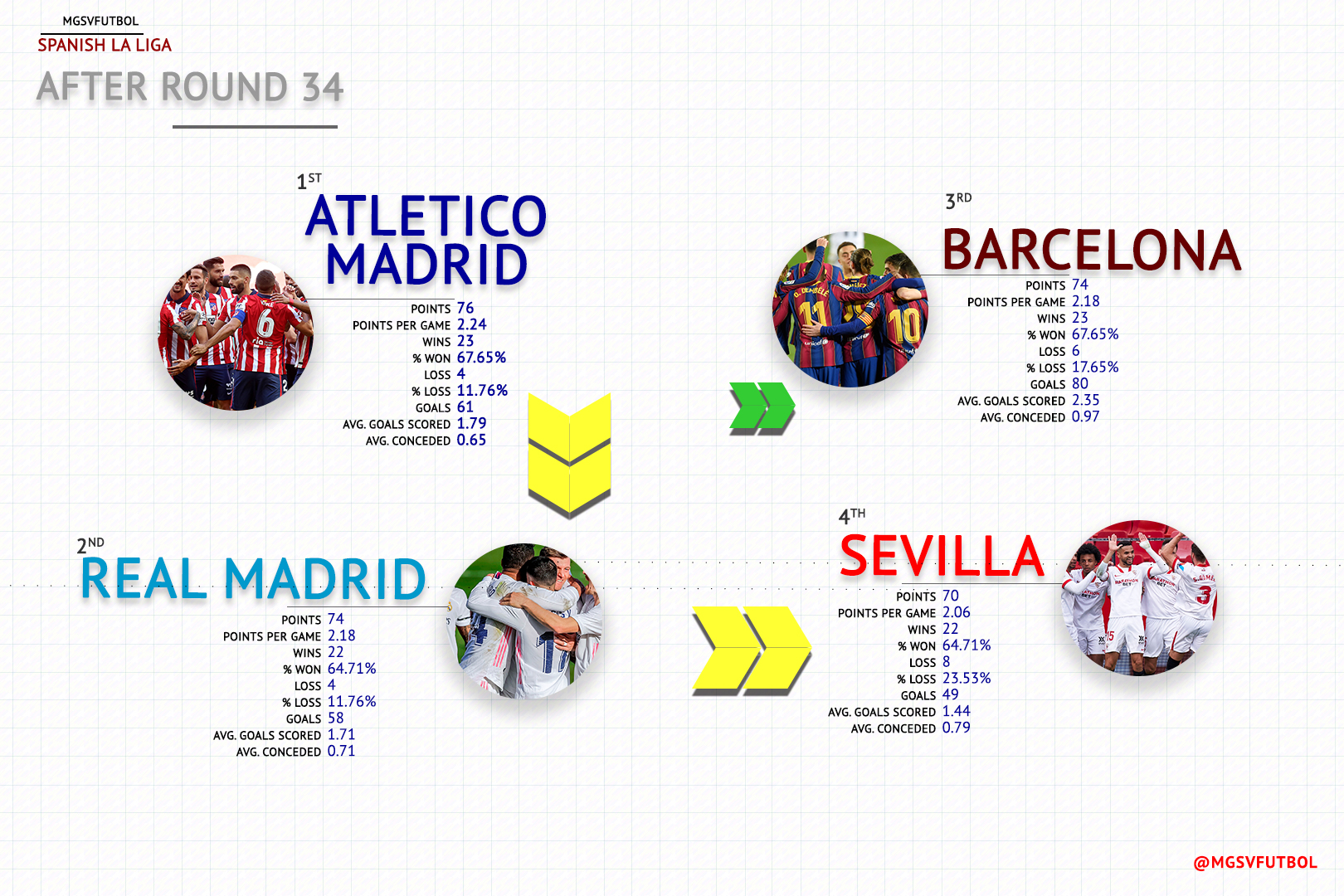 The odds are slim for a league title for Monaco and Lyon, but they remain contenders.
Lille and Paris St. Germain are the favorites to win the French Ligue 1 title after 35 rounds.

The reverse fixture was a 4-0 win for Lille. A repeated outcome is what they need to keep their title dreams alive. Lille will be at Lens for the three points that will put them 2 games away from being the new league champions.

There is nothing anyone can do to stop Lille from being the next French champions if they win their remaining three games of the season.

Lens are coming into this game after losing 2-1 to Paris St. Germain. It was their first league defeat in 14 games.

LYON VS LORIENT
REIMS VS MONACO

After dragging Monaco further out of title contention. If Monaco fails to bounce back with a win at Reims, Lyon can take 3rd spot with a win at home over a relegation-threatened Lorient.

RENNES VS PARIS ST. GERMAIN
After their Champions League elimination in the middle of the week, Paris St. Germain’s focus is to get back to the top of the Ligue 1 standings.
With Lille opening the round with their game at Lens, Paris St. Germain will know what is required of them before kick-off.