UEFA ranks these as the best 5 domestic leagues in Europe.

The MGSVfutbol Gold List ranks the 98 football clubs that are currently in Europe’s top five domestic leagues using match results and how they come about those results.

The value from titles won through the season are added to the final GOLD LIST ranking at the end of the domestic season.

These titles are the …

The calculations for the value of each cup title are done with the ranking position and ranking points of the opposing teams in the final stages of the tournament.

Top of the English Premier League on 71 points; picking up 2.37 points per game on average.
After 30 matches played, Manchester City have won 73.3% of their league games, dropping 19 points in total.
They’ve suffered 3 defeats (all shocking). Scored 64 goals, while allowing in 21.

Manchester City has the most wins amongst the teams in Europe T-5 leagues, and the second in percentage of wins.

After losing their crown to Liverpool in the 19/20 season, Manchester City are doing everything right this year to reclaim the crown. They are currently 14 points clear in the lead with eight games left for them to pick up the title.

Bayern are attempting to reclaim their title as Bundesliga champions at a rate for 2.35 points per game.
61 points accumulated after 26 games; 19 wins and 4 draws.
Bayern Munich have scored 78 goals so far. Triple digit goals might just be possible.

Bayern has the most goals scored and have the highest goal to game ratio amongst the clubs in Europe’s top 5 leagues.

UNLESS THE FOOTBALL GODS WANT US TO HAVE ANOTHER HEADLINE, BAYERN MUNICH’S PATH TO ANOTHER BUNDESLIGA TITLE IS CLEAR with a win against RB Leipzig in the next round.

There are 8 rounds of the season left for any team to stop Bayern Munich from a 9th successive season as the German Bundesliga champions.

Paris St. Germain are second on the list of teams with the most wins amongst the clubs In Europe’s top 5 leagues.

The chasing pack (Lille, Lyon, and Monaco) are making the title race a stiff contest but Paris St. Germain has more than enough in their squad to secure the French Ligue 1 title for the 4th straight year. To calm down nerves in the final weeks of the season, Paris St. Germain will need to create a gap in points accumulated with a win against Lille in the next fixture.

A game in hand and on top of the Serie A standings.
Inter Milan have scored as many goals as points accumulated after 27 games played – 65
They are picking up 2.41 points per game so far. And they need to keep that pace steady to dethrone Juventus.

Inter Milan have the most points per game, highest on the list won win rates, and second on the list of ‘most wins’ among the clubs in Europe’s top 5 leagues.

INTER MILAN ARE ON TRACK TO SNAP JUVENTUS TITLE WINNING STREAK.
Juventus have been the champions in the last 9 seasons.
2010 was the last time Inter Milan were league champions. They won a treble that year.
They have the opportunity and (on paper) the strength to go on and get the job done after 11 seasons of trying.

KEEPING THE TITLE IN THE CITY

An average of 2.36 points per match played in the Spanish La Liga this season.
Scoring an average of 1.82 goals per game, while conceding at a rate of 0. 64 goals
After 28 matches played, Atletico Madrid have 66 points from winning 71.43% of games played.

Atletico Madrid have conceded the fewest goals and have the fewest defeats amongst the teams in Europe T-5 leagues.
They are also second on the list of teams with most wins.

The league title is currently with Real Madrid.
With 10 rounds left to be played, Atletico Madrid are looking to drag it from their neighbors. 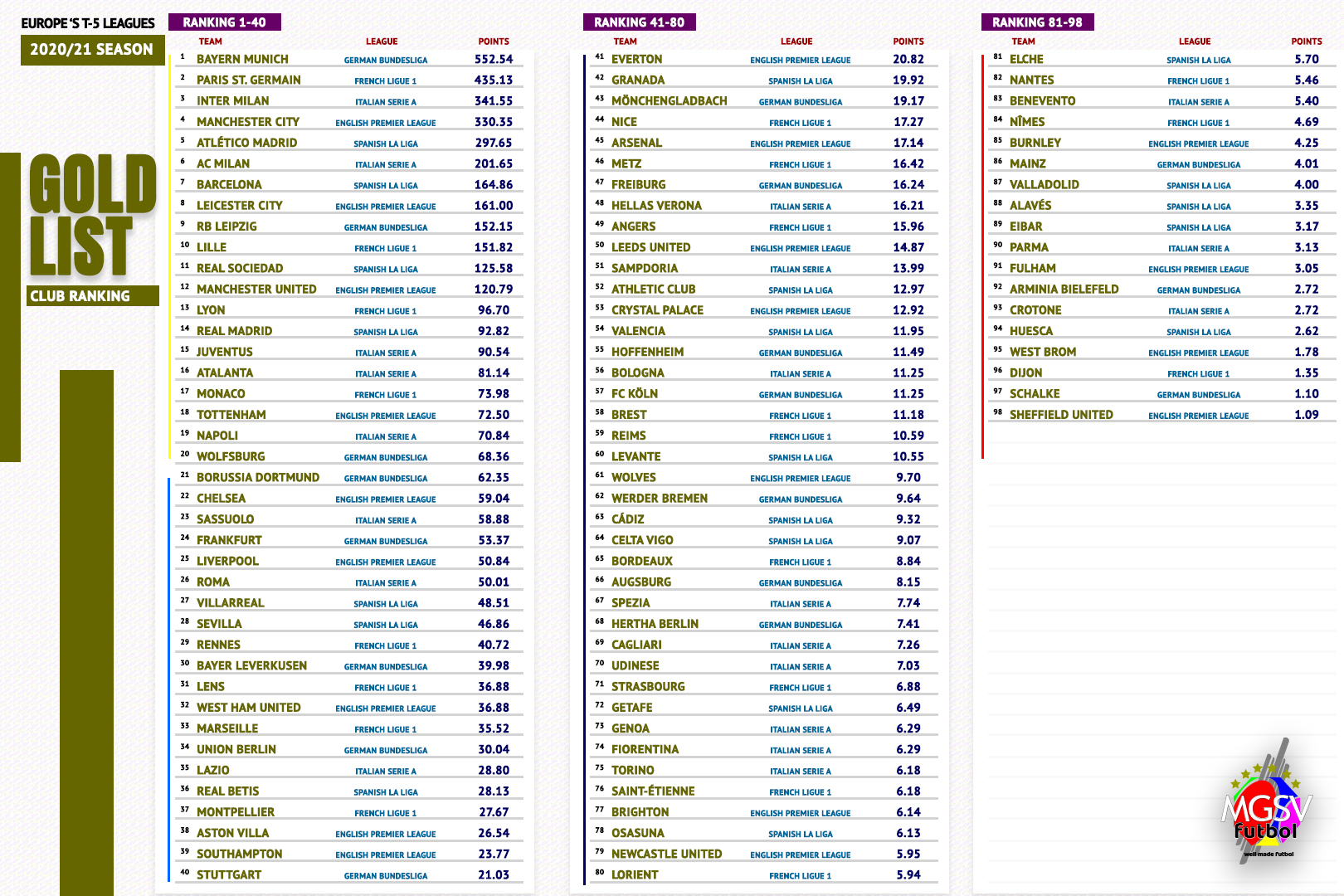 THESE CLUBS KEPT THEIR IN THEIR POSITION FROM THE PREVIOUS GOLD LIST RANKING.

After coming out at the bottom of the previous ranking, Burnley moved up 22 positions to leave the space for Schalke; who dropped 4 positions.

The biggest positional move forward and backwards were by an English Premier League team.
Manchester United moved 40 positions up (from 57th to 8th, while Southampton moved 47 positions down (from 16th to 63rd).

Inter Milan (Italian Serie A) moved up 26 positions; from 28th to 2nd.

Barcelona moved up a 27 position to 6th after coming out 33rd in the previous ranking.

Athletic Club moved up 25 positions; from 73rd to 48th
Burnley moved up 22 positions from last placed 98th to 76th.

Inter Milan 2.41 points per game is the highest rate of point picking among the teams in the T-5 leagues.
Manchester City, Atletico Madrid, and Bayern Munich are not too far off. It’s fitting that all four teams are also the leaders in the current standings of their respective leagues.

Paris St. Germain at 2.10 ppg is the lowest rate among the teams that are currently on top of their domestic league standings.

Barcelona’s 2.21 ppg is the highest for a team that isn’t top of their domestic league standings.

THE CLUBS WITH THE MOST WINS

THE CLUBS WITH THE HIGHEST WIN RATE

Inter Milan has the highest winning rate among 98 teams in Europe’s top 5 leagues.
Barcelona took the 5th place in the ranking, bumping Paris St. Germain down to deny the list from having a top five made of domestic league leaders.

CLUBS WITH THE HIGHEST DRAW RATE

THE CLUBS TO HAVE SUFFERED THE MOST DEFEAT

THE CLUBS WITH THE HIGHEST LOSING RATE

CLUBS PICKING UP THE MOST GOAL PER GAME

This shouldn’t come as a surprise when you look at the rate Robert Lewandowski is scoring goals.

CLUBS WITH THE MOST GOALS CONCEDED

CONCEDED GOALS AT THE HIGHEST AVERGAGE

REGRESSION – THE CLUBS THAT DROPPED IN RANKED POSITION

Cagliari (Italian Serie A) dropping 40 positions to 45th completed the list of teams that dropped 40+ spots in ranking.

Sassuolo (Italian Serie A) dropped 30 points from 7th to 37th.

IT’S ONLY FAIR THAT SCHALKE GETS RELEGATED

It will be unfair to football for Schalke to stay up in the top flight of German football league when you consider the results they’re racked up since the middle of last season.

Schalke in their last 42 matches in the German Bundesliga.

They deservingly sit at the bottom of the rankings after coming in bottom in many key areas. – Fewest wins, fewest points-per-game, fewest goals scored while being top of the list when it comes to the average number of goals conceded.

THE CURRENT LEAGUE STANDINGS IN THE TOP-5 LEAGUES

Manchester City comeback to their domestic season with ambitions of winning the English Premier League title and all other titles allowed. Manchester City are alive and well in all competitions; the FA Cup, the League Cup, and the UEFA Champions League. They are in position to add to the long list of historic records they made under Pep Guardiola.
Leicester City will be the next opponent for Manchester City. A tasty clash since both clubs are technically still in the Premier League title race.
Chelsea have been unbeaten since Thomas Tuchel took over managerial duties. Chelsea’s next game is against relegation-zoned West Bromwich Albion.

Liverpool travels to London to face Arsenal.
While both teams are hitting below pre-season expectations, Liverpool have a 4 point lead in the standings on Arsenal. Earlier meeting between the two was a 3-1 win for Liverpool. Recent form of both teams makes this harder to predict than in the past meetings. The last time Arsenal won a game against Liverpool was in 2016, so Liverpool are still favorite in this fixture.

West Ham are away against Wolves
West Ham are touching distance from a Champions League qualifying spot. A win at Wolverhampton will help the cause. The last meeting was a 4-0 win for West Ham so a repeat of that will be ideal.

11 points separate Sevilla and Atletico Madrid in the ‘top four’ of the La Liga standings. Atletico Madrid’s lead isn’t wide enough to afford dropping points. A victory in Seville is almost a requirement for Atletico Madrid at this stage; especially when both Barcelona and Real Madrid have favorable opponents.

Monaco will welcome Metz
Monaco are in the title race and in the run for Champions League football. They need to keep the going with a win against Metz.

Top of the table face-off. Paris St. Germain and Lille go head-to-head to find the points that will separate them. They both sit on 63 points after 30 matches played. Paris St. Germain were 3-0 winners when they met on March 17th in the Coupe de France Round of 16 tie. They will be looking to repeat that outcome. The last league meeting between the two ended goalless. A draw in this tie won’t be the worst outcome as both sides would hate to lose this in this fixture. The incentive to win is as high as the incentive not to lose.

Lyon goes to Lens for three points.
Lyon has allowed points to slip through their fingers in recent weeks but with Paris St. Germain and Lille going at each other, it will be to Lyons advantage to pick up three points from a win at Lens.

AC Milan takes on Sampdoria at the San Siro.
Sandwich between two teams that have a game in hand, AC Milan can’t afford dropping points against Sampdoria.

Turin Derby – Torino host Juventus
Juventus next game will be the Turin derby. They will visit a struggling Torino side to look for a win to make up for their shock defeat against Benevento in the last round.

Inter Milan visits Bologna.
Inter Milan will want to give the advantage they have of having a game in hand. They are going to Bologna to look for a win that will keep or extend their lead in the Serie A title race.

Frankfurt are at Dortmund
Dortmund can’t afford a defeat that will put them 7 points away from the ‘Top 4’. Dortmund can cut the gap between them and a Champions League qualifying spot to a single point if they can pick up a win at home against Frankfurt. On the other end, Frankfurt can do the reverse and possibly pull a point away from the top 3.

TOP OF THE LIST IN THE EUROPEAN GOLDEN SHOE RACE