Porto needed extra time to book their place in the Round of 16. They also needed away goals.
Dortmund, Liverpool, and Paris St. Germain completed the first half of the quarterfinalists.
Manchester City picked up a 2-0 win in both legs against Monchengladbach.
Real Madrid completed the job at home against Atalanta.
Lazio got on the score sheet but it was quite evident that there was little chance of them getting anything in Munich.
Atletico Madrid were more intentional in the second leg, but made no difference in the final outcome against Chelsea.

The first leg advantage has held up in the Round of 16.
No team was able to overturn the result from the opening leg. 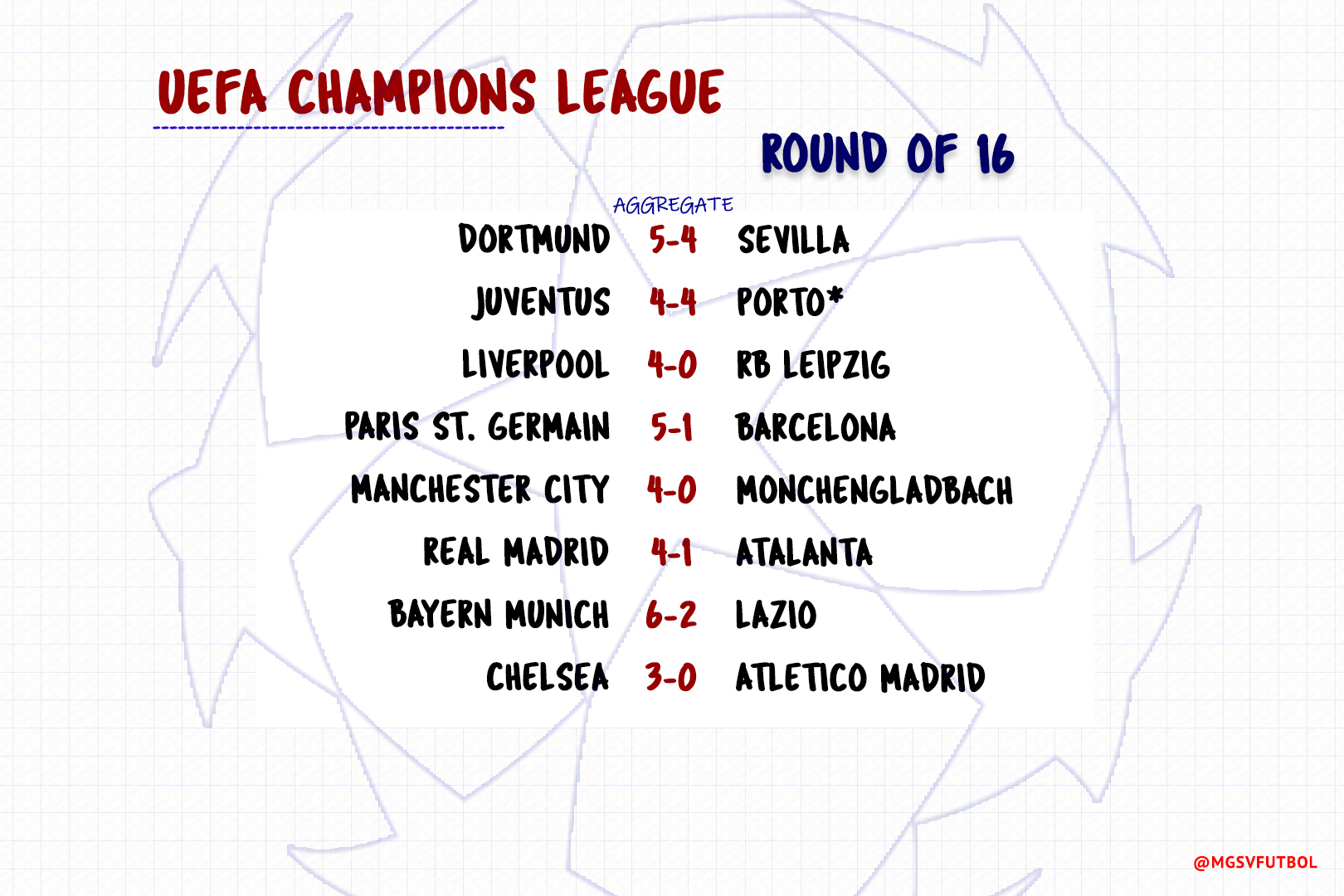 PORTO ADVANCE’S TO THE QUARTERFINALS

Sergio Oliveira’s goals sink Juventus in Turin. His first goal put the pressure on Juventus to find three goals to win, and his second goal in extra time restored Juventus’ need for multiple goals to win.
Federico Chiesa scored two after the restart to level the score on aggregate. His two goals in addition to Porto’s reduction to 10-men after Mehdi Taremi got sent off for completing yellow cards within minutes helped Juventus to become bigger favorites than they already were before the kick off.

Adrien Rabiot quickly got Juventus back to a goal away from qualification after Sergio Oliveira scored in the 115th minute to get Porto to a ‘2-2’ draw for the night.

DORTMUND ADVANCE’S TO THE QUARTERFINALS

Sevilla picked up a draw in Germany. In the end, they needed an extra goal to send the match into extra time. Dortmund added to their 3-2 first leg win to eliminate Sevilla. Despite having a goal ruled out by VAR, Erling Haaland scored Dortmund’s 2 goals in the home draw. Youssef En-Nesyri scored the two for Sevilla. Dortmund gets to the quarter finals on a 5-4 aggregate win.

LIVERPOOL ADVANCES TO THE QUARTER FINALS

Liverpool won 2-0 (again) Mohamed Salah and Sadio Mane were the providers of the goals (again). Liverpool took a 4-0 aggregate win over RB Leipzig to go into the quarter finals of the Champions League.

Paris St. Germain’s big win at Camp Nou held up for them to ease pass Barcelona into the quarter final stage of the Champions League. It finished 1-1 in Paris, a much improved Barcelona bowed out more gracefully than we would’ve expected.

With the form Monchengladbach had been on in recent weeks, the furthest thing from reality is a win against Manchester City.

Kevin de Bruyne’s goal in the 12th minute killed the game completely in the second leg.

It could’ve been more goals for Manchester City, but it ended up being a repeat outcome of the first leg.

Atalanta had all the reasons to start strong. Their defeat in the opening leg can be attributed to them playing with a numerical disadvantage and the unlikely goal scored by Mendy.

But after goalkeeping/defensive error allowed Karim Benzema to open the scoring and give Real Madrid the lead, it became difficult for Atalanta to find their way back into the contest.

The defending champs move strongly into the next stage.
They had to lose 4-0 at home to Lazio in the second leg to be eliminated. (Yes, It was that silly).

Bayern eases past Lazio with a 6-2 aggregate win.

CHELSEA ADVANCES TO THE QUARTER FINALS

Atletico Madrid kicked off the second leg with more intent.
Their intent to get level on goals pushed more personnel to the attacking end of the pitch.
This opened Atletico Madrid up for counter attacks; and that was how Chelsea got both of their goals in the second-leg.