10 more rounds left to go, and the race for the league title and the race to avoid relegation are both tight contests.

The title gaps in the title race remains as it was at the start of the round.
The leading three teams were all on the winning end of the score.
Sevilla narrowly escaped defeat, but fell an extra 2 points behind the top 3.
Luckily for Sevilla, their lead on 5th place Real Sociedad grew instead of shrinking.
Real Sociedad’s defeat at home to Barcelona allowed Real Betis to equal their points tally with a win against Levante.

Villarreal closed in on the top 6 with a win. 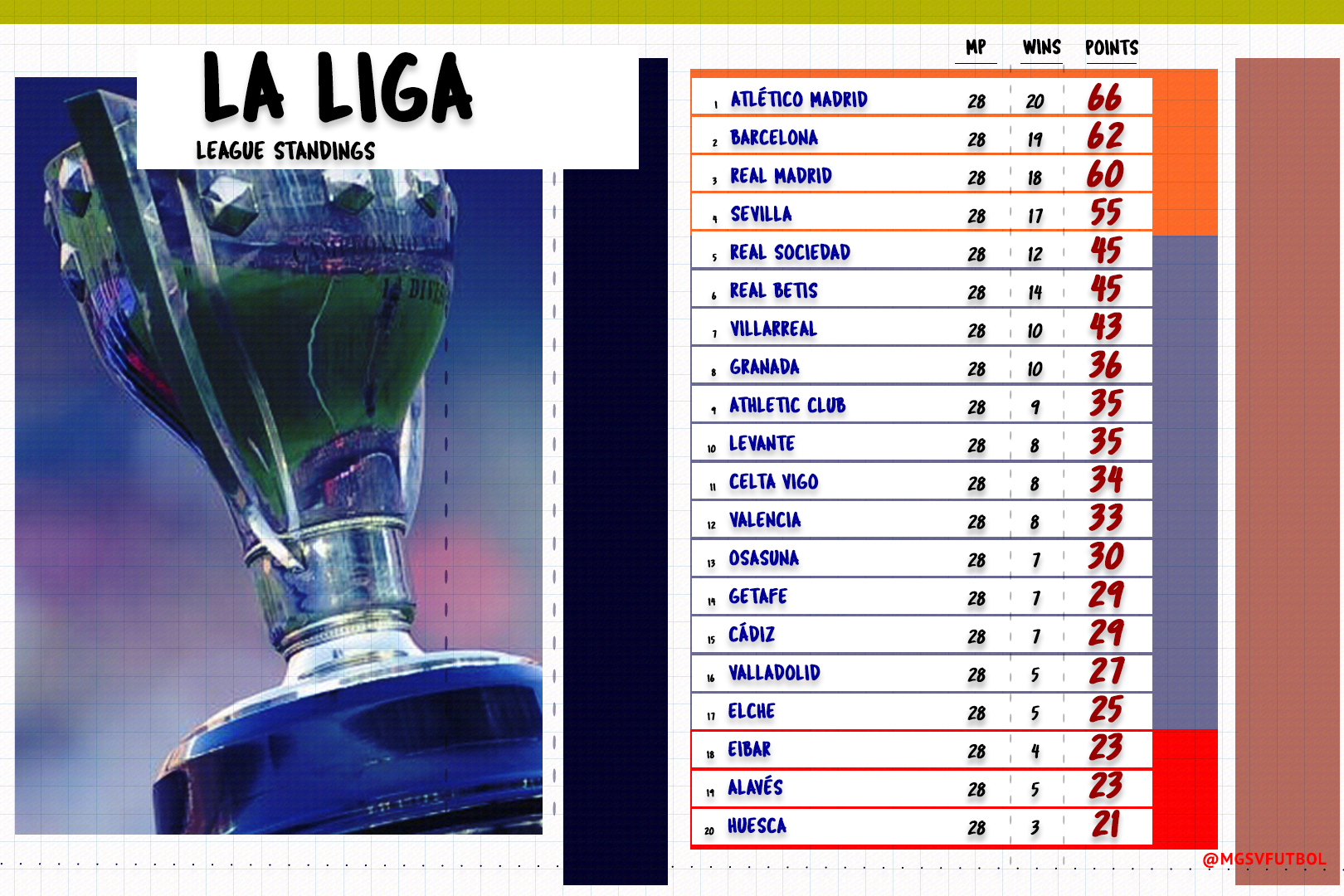 The goals came in the final 20 minute for Real Betis to bounce back from their Seville derby defeat with a 2-0 win against Levante. The result opened widened Real Betis lead on Levante to 10 points.

Both sides didn’t do enough to deserve the win. Athletic Club and Eibar share the points after a 1-1 draw.

Marco Asensio’s late goal killed any hope of a late comeback, but it was Karim Benzema’s two goals that led Real Madrid to a win at Celta Vigo.

Bottom tabled Huesca picked up a point from a goalless draw with Osasuna.

Sevilla were on the brink of leaving Valladolid empty handed until their goalkeeper Yassine Bounou scored in the final minute of additional time to get them level. Fabian Orellana converted a penalty into the opening goal of the match to give Valladolid the lead at the end of the first half. Yassine Bounou came to the opposite end of the pitch to get the equalizing goal for Sevilla.

Angel Rodriguez missed a penalty that could have completed the comeback for Getafe. Getafe came from behind to take a point at home against Elche. With the relegation battle next door, both teams couldn’t afford a defeat.

Valencia opened a 3-point lead on Granada after a 2-1 win against them.

Luis Suarez’s 500th career goal was an important one that ended up giving Atletico Madrid against Alaves. Jan Oblak came up big after saving Joselu’s penalty in the 86th minute to keep Atletico Madrid’s lead.

Sergino Dest scored his first two La Liga goals for Barcelona as the team went on to pick up three points away from a 6-1 win against Real Sociedad. Antoine Greizmann opened the scoring, Jordi Alba assisted the well-worked final goal, and manager Ronald Koeman saw his side pick up a big win. All three were celebrating their birthday on the day.