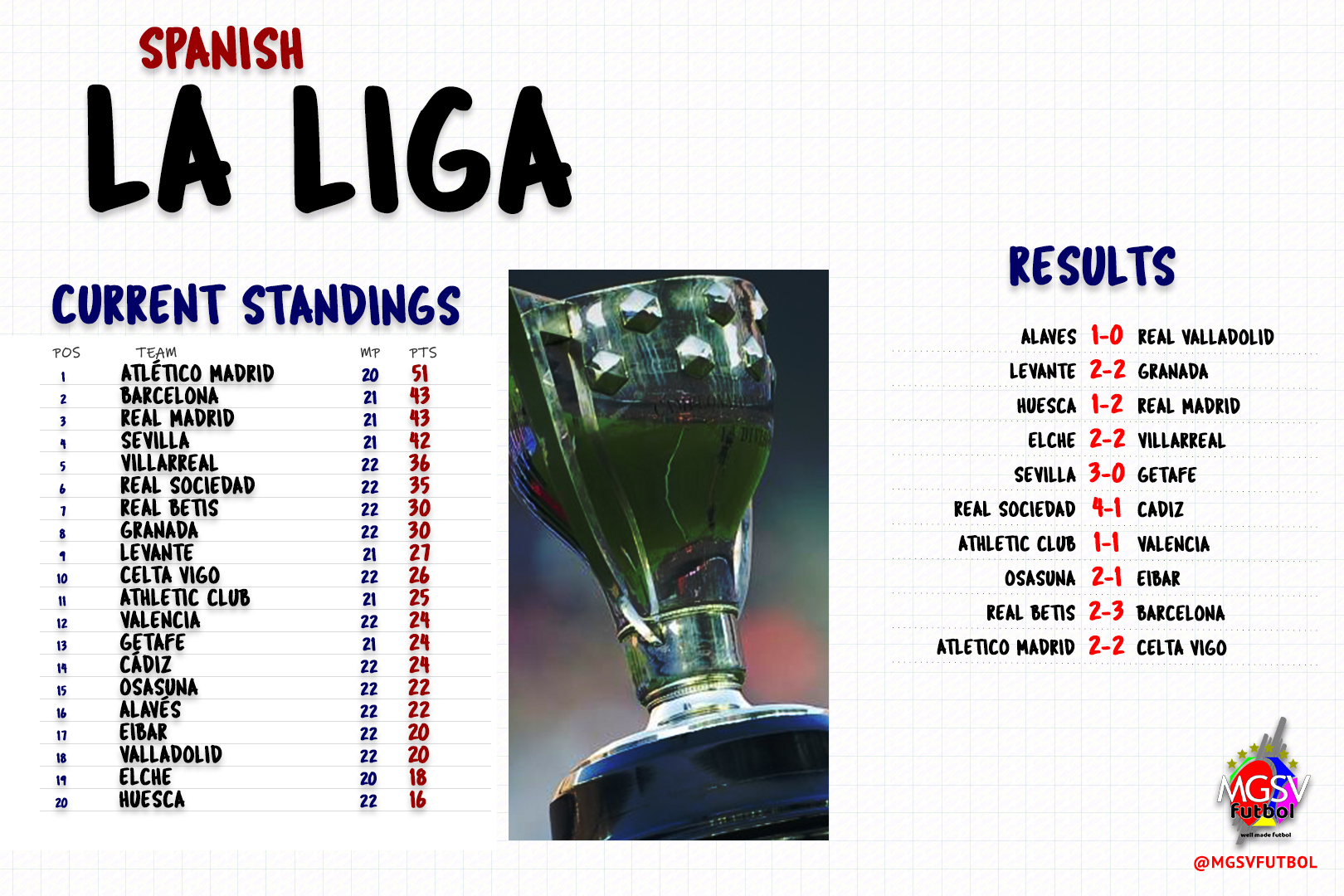 Joselu scored the only goal of the match for Alaves to open the round with a win against Valladolid. The result allowed Alaves to move 2 points above Valladolid.

Roberto Soldado scored in the additional minutes of the second half to see Granada avoid defeat at Levante. The result kept the three point lead Granada had on Levante, and denied Levante the option of using their game in hand to open a three point lead.

Bottom table Huesca were close to upsetting Real Madrid. Raphael Varane scored a second-half brace to get Real Madrid a 2-1 win away against Huesca. It was a needed win for Real Madrid to bounce back from defeat to Levante in the last round.

Gerard Moreno’s first half brace ended up not being enough to get Villarreal the win to bounce back from their midweek Copa del Rey exit and make up for some of the points dropped in their last three league matches. A 2-2 draw against relegation-zoned Elche was Villarreal 4th straight league game that have ended in a draw.

Sevilla picked up three points at home against a 10-man Getafe side.

Mikel Oyarabal scored his brace in the first half, while Alexander Isak got his in the second half. Real Sociedad beat Cadiz by 4 goals to 1. Real Sociedad picked up their second win in 12 league matches.

Ante Budimir got Osasuna the win at home against Eibar with his goal in the 86th minute. Osauna used the 2-1 win to leap above Eibar in the standings by 2 points.

Lionel Messi came off the bench in the 57th minute and changed the game for Barcelona in Seville. Barcelona were trailing 1-0 against Real Betis until Messi was subbed into the game in the 57th minute; to get the equalizing goal just 2 minutes later. He played a hand in all three of Barcelona’s goals that lead to their 3-2 win against Real Betis. Victor Ruiz scored an own goal but redeemed himself with a goal on the other end.

(First league game without a win in 9 matches).This is the first set of points dropped by Atletico Madrid in the league since losing the Madrid derby against Real Madrid.
Luis Suarez added two goals to his tally but it wasn’t enough to help Atletico Madrid secure a win against Celta Vigo. Fecundo Ferreya scored in the 89th minutes to get Celta Vigo a third straight draw in the league.