FRENCH LIGUE 1 – LILLE KEPT THEIR LEAD IN BUT THE CHASING PACK ARE NOT LETTING THEM GET AWAY.

The teams in the ‘top 5’ were all winners in this round.
With 6 rounds left to go, Lille are leading the title race by 3 points.
Monaco are 3rd and on the tails of Paris St. Germain for the direct qualification spot for the UEFA Champions League.
And Lyon are not giving Monaco the room to get away in the race.

Paris St. Germain flexed their muscle with a win at Strasbourg, but their title defense season hinged on Lille dropping points.

Monaco glued Dijon to the bottom of the league standings by handing them a 3-0 defeat.

Metz missed the opportunity to take the lead in the 17th minute from the penalty spot. It took an hour for the first goal of the match but Lille opened the round with a 2-0 win at Metz.

Paris St, Germain followed suit by grabbing a 4-1 win at Strasbourg. There were 4 different names on the score sheet but Kylian Mbappe’s goal to open the scoring for the match added to his tally in his quest for another season as the league top scorer.

Gaetan Laborde’s goals got Montpellier even on two occasions in their match with Marseille. Montpellier made it 10 league games unbeaten by holding Marseille to a 3-3 draw. Marseille were reduced to 10-men in the 62nd minute when Duje Caleta-Car was sent off on a red card. Despite this, Marseille restored their goal lead about 10 minutes later until Gaetan Laborde scored his second of the match in the additional minutes to strip 3 points Montpellier to strip 2 points from Marseille.

It was a consecutive defeat and 3 games without a win for Nantes since their shock victory in Paris against PSG. On the other hand, it waa 4 consecutive games without defeat for Reims after a 1-0 win against Nantes.

Brest and Nimes shared the points in their relegation avoidance battle.
Four separate goal scorers were on the shieet for Lens in their 4-1 win over Montpellier.
Nice stayed 3 points ahead of Reims after a goalless draw between the two.

Saint-Etienne opened a 3-point lead on Bordeaux. Wahbi Khazri’s hattrick saw Saint-Etienne bounce back from an early goal down to a 4-1 win against Bordeaux.
Wissam Ben Yedder added two goals to Stevan Jovetic’sw winning goal to allow Monaco to follow up successive 4-0 wins in the league with a 3-0 win against Dijon.
Lyon secured their first league win in four games through a win against Angers. Memphis Depay contributed 2 goals to Lyon’s 3-0 win.

ENGLISH PREMIER LEAGUE – CAN A SHOCK DEFEAT FOR MANCHESTER CITY PUT ENOUGH ‘BLOOD IN THE WATER’ FOR THE OTHER SHARKS?

Manchester lead was reduced to 11 points after a shock home defeat to Leeds United.
Manchester United has win in hand to narrow the gap in the title race to 8 points.
West Ham moved a point from third place.

Aston Villa and Everton have 8 more games to play, Fulham and Manchester City have 6 more left, the rest of the Premier League have 7 games (each) to end the season.

Adama Traore’s first goal in 48 league matches was the winner for Wolves against Fulham. It is 4-straight defeats for Fulham since they won at Anfield against Liverpool.

They knocked them out of the FA Cup, but Manchester City can’t say they were able to get a league win against Leeds United this season. Stuart Dalas scored a goal in the final minutes of each half to see a 10-man Leeds United teams secure a win against Manchester City. The 2-1 defeat for Manchester City reduced their lead to11 points after having played an extra game.
Liverpool did two things over the weekend, took back the three points they lost to Aston Villa in the first half of the season, and a league victory at Anfield after 8 games without one. Trent Alexander-Arnold had a touch mid week after his performance in the Champions League quarter final game against Real Madrid, but he saved his week with the winning goal for Liverpool against Aston Villa.
Crystal Palace scored a goal on this occasion, but couldn’t stop Chelsea from a league double of scoring 4 goals per game. A Chrisitan Pulisic brace helped Chelsea bounce back from their home defeat at West Brom with a win against Crystal Palace.

Newcatle came from a goal down to win at Burnley. The 2-1 win for Newcastle narrowed the gap between the two teams to a point.
Jesse Lingard and Kelechi Iheanacho both scored two goals for their team, but Lingard had Jarrod Bwoen add to the scoring for West Ham to take the three points from a 3-2 win against Leicester City.
Manchester United couldn’t make Tottenham pay back the debt for the 6 goals, but they restored the points dropped in the earlier meeting. Manchester United came from a goal down to take a 3-1 win from North London.

West Brom followed a 5-2 win over Chelsea with a 3-0 win against Southampton. They have 7 games to save their season and avoid relegation.
A goalless draw with Brighton was Everton’s fourth league game without a win.

SPANISH LA LIGA – IT’S STILL DIFFICULT TO PREDICT THE WINNER AND WHO WILL BE ON THE PODIUM AT THE END OF THE SEASON. 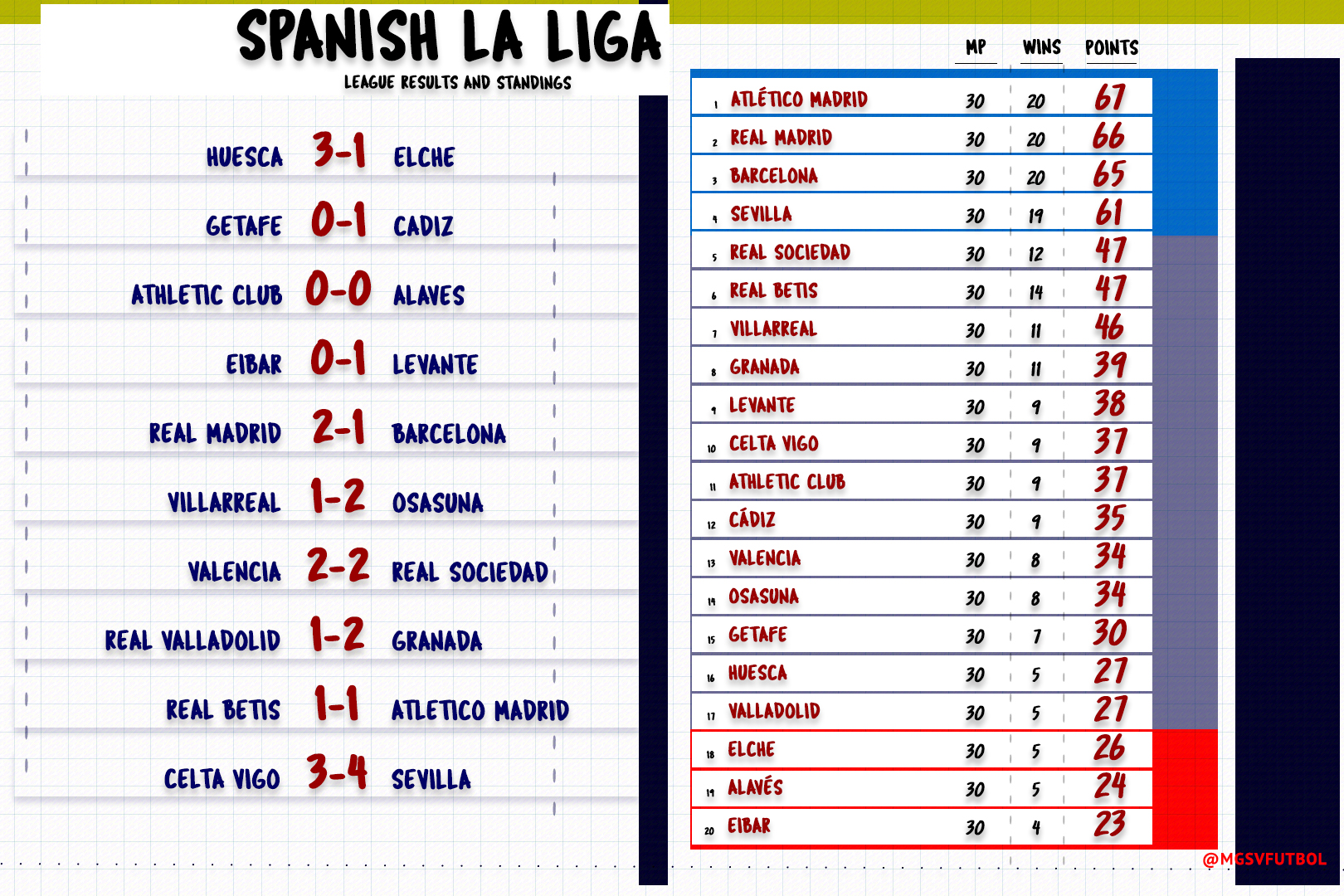 Both teams are far from safe in the relegation battle, but Huesca have been getting the right marks in recent games. It was three games without defeat and a successive league win for Huesca after they managed a 3-1 win against Elche.

Cadiz followed up their win against Valencia with another against Getafe. Since beating Huesca (then bottom of the league table), Getafa have won 1 of their 12 league matches; consisting of 7 defeats.
Relegation-zone Alaves held Athletic Club to a goalless draw. It’s been 6 games without a win for Athletic Club; consisting of 1 league final defeat.
Eibar lost at home to Levante after conceding a late first half goal.
Real Madrid won the El Classico to move above Barcelona in the standings. It was a 2-1 home win on a drenched night for Madrid. Their two goals came in the opening half hour, and could have added more goals if they had been clinical with the counter attacks.

Villarreal missed out on finishing 5th after a defeat at home to Osasuna.
Valencia came from 2 goals down to get a point at home against Real Sociedad.
Jorge Molina and Quini provided the goals for Granada to come from a goal down to win against Valladolid. The result ended a run of 4 games of defeat for Granada.
Atletico Madrid dropped points in Seville after a 1-1 draw with Real Betis.

A 3-2 first half Celta Vigo lead was overturned by Sevilla with the goals from Ivan Rakitic and Alejandro Gomez. The 4-3 win for Sevilla meant all the teams in the top 4 have 60+ points.

ITALIAN SERIE A – INTER MILAN ARE INCHING CLOSER TO THE LEAGUE TITLE AFTER OVER A DECADE OF ATTEMPTS. 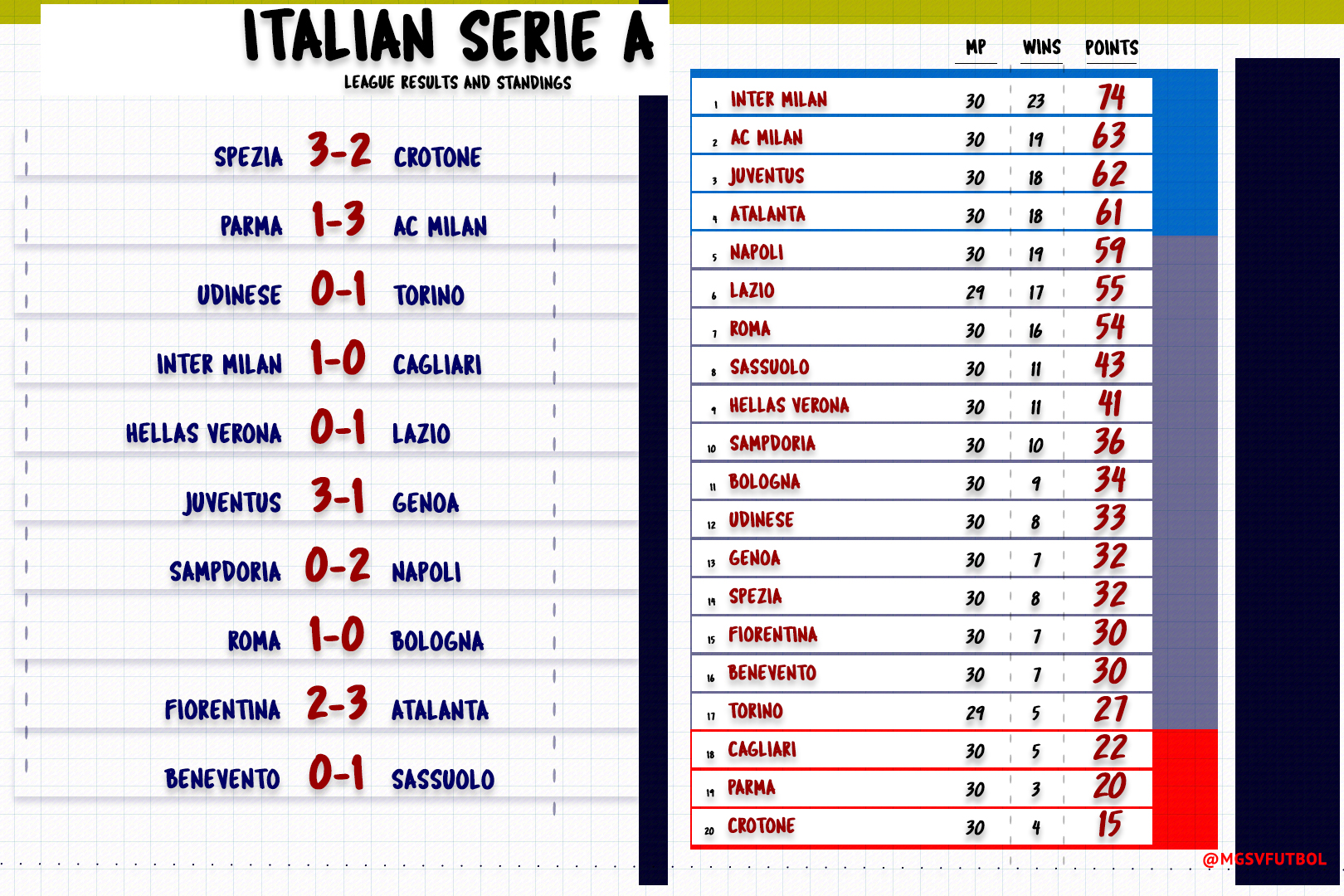 The point gaps between the teams in the Champions League qualifying spots stayed as it was from the start of the round.
It was a narrow win but Inter Milan secured the three points to keep their lead in the Serie A title race intact.

Crotone just can’t find a win. They’ve lost their last four league games despite scoring multiple goals in each. Spezia found two late goals to come from a losing position to win 3-2 against a Crotone side that is stuck at the bottom of the Serie A standings.
AC Milan picked up a win to keep second place after a 3-1 victory against relegation zoned Parma.
Torino followed up their Turin derby draw with a 1-0 victory over Udinese. The result allowed Torino to double the point gap between the two teams.

It was narrow but massive. Matteo Darmin 77th minute goal handed Inter Milan a 1-0 win over Cagliari. A win that keeps Inter Milan’s lead at the top of the table.
Sergej Milinkovic-Savic’s goal saved Lazio from dropping points against Hellas Verona.
Juvnetus made it two wins in a row with a 3-1 win at home against Genoa.
Napoli’s response to their mid week defeat to Juventus was a win against Sampdoria.

Atlanta wins 3-2 against Fiorentina. Josip Illicic converted from the penalty spot in the 70th minute to deny Dusan Vlahovic from reducing a point for Fiorentina.

GERMAN BUNDESLIGA – BAYERN FALLS SHORT OF A WIN. WILL A 5-POINT LEAD BE ENOUGH FOR 6 ROUNDS? 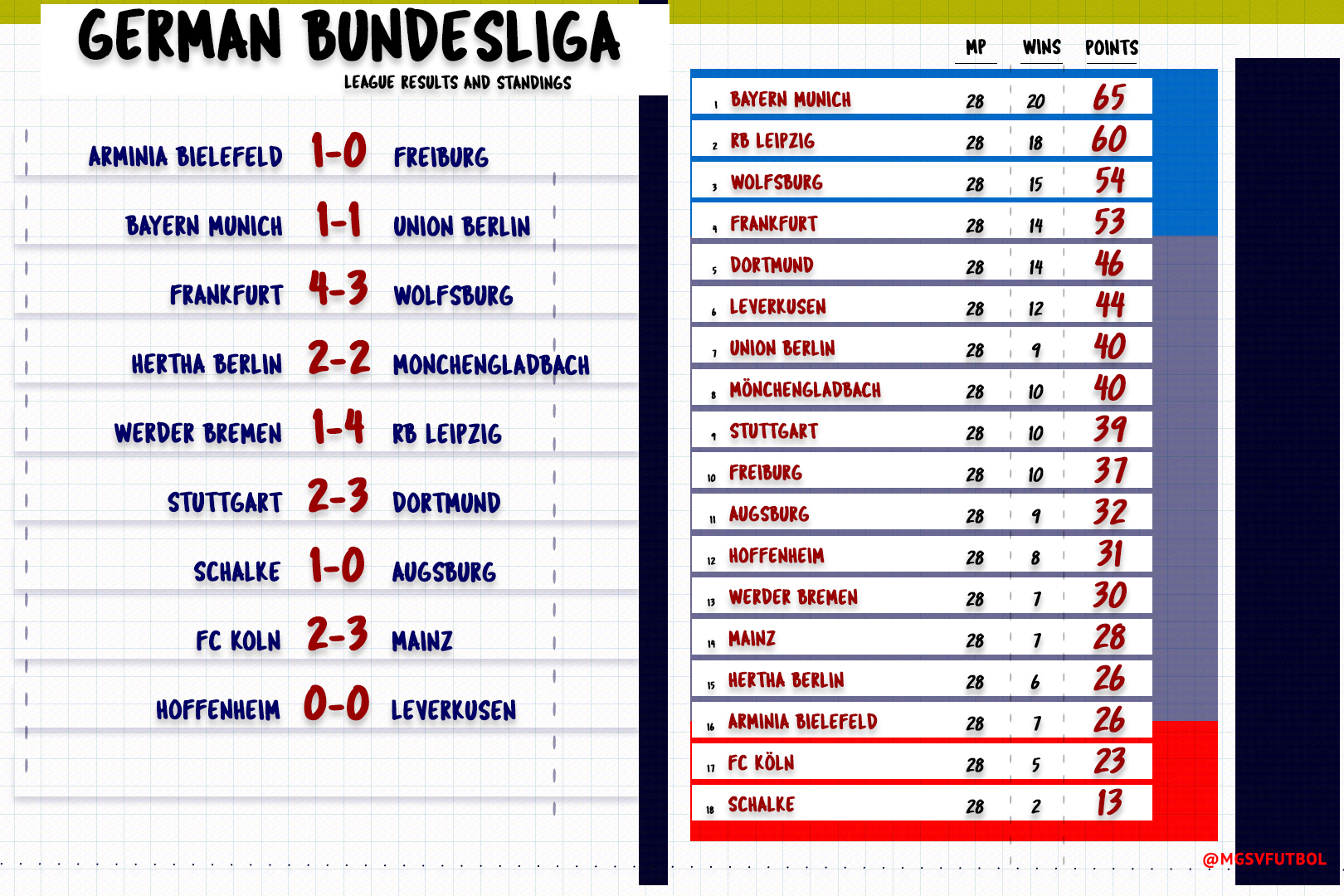 With 6 rounds left of the Bundesliga season to be played, Bayern Munich’s lead has been cut to 5 points.
There are 18 points left for each team to grab.
RB Leipzig hit the 60 point mark to join Bayern Munich in the elite group.
Frankfurt moved a point away from Wolfsburg.
Dortmund are 7 points from Champions League qualification.
Leverkusen, Union Berlin and Monchengladbach picked up a point each, but Moncehngladbach were able to move up a position with their point (to 8th), while the other two kept their place.

Schalke remain 13 points from safety, despite a rare win.

An own goal handed a relegation threatened Arminia Bielefeld a win against Freiburg.

A depleted Bayern Munich couldn’t escape with a win against Union berlin. It ended in a 1-1 draw when Marcus Ingvartsen scored an 86th-minute equalizing goal for Union Berlin to earn a point in Munich.
Frankfurt was on the right side of the score in a 7-goal game against Wolfsburg. The 4-2 win allowed Frankfurt to close the point gap to one, while allowing RB Leipzig to open a 4-point lead on Wolfsburg.
A 10-man Monchengladbach got a point against Hertha Berlin. Monchengladbach’s goalkeeper Yann Sommer was sent off before the quarter of the hour.
RB Leipzig bounced back from their defeat to Bayern in the previous round with a win against Werder Bremen. The 4-1 victory pushed Leipzig to 5 points from the top of the league.
Dortmund narrowly escaped Stuttgart with a win to end three matches without a win. The 3-2 win for Dortmund brings them 6 points away from Champions League qualification.spot in the league. There are 6 games left in the season to close that gap.

Suat Serdar scored early to give Schalke a goal lead that was protected till the final whistle. A 1-0 win against Augsburg was Schalke’s second league win of the season; and their second league win in their last 44 league matches.
Mainz helped themselves in the relegation avoidance battle after a late goal handed them a win at Cologne.

Hoffenhiem and Leverkusen shared the points.