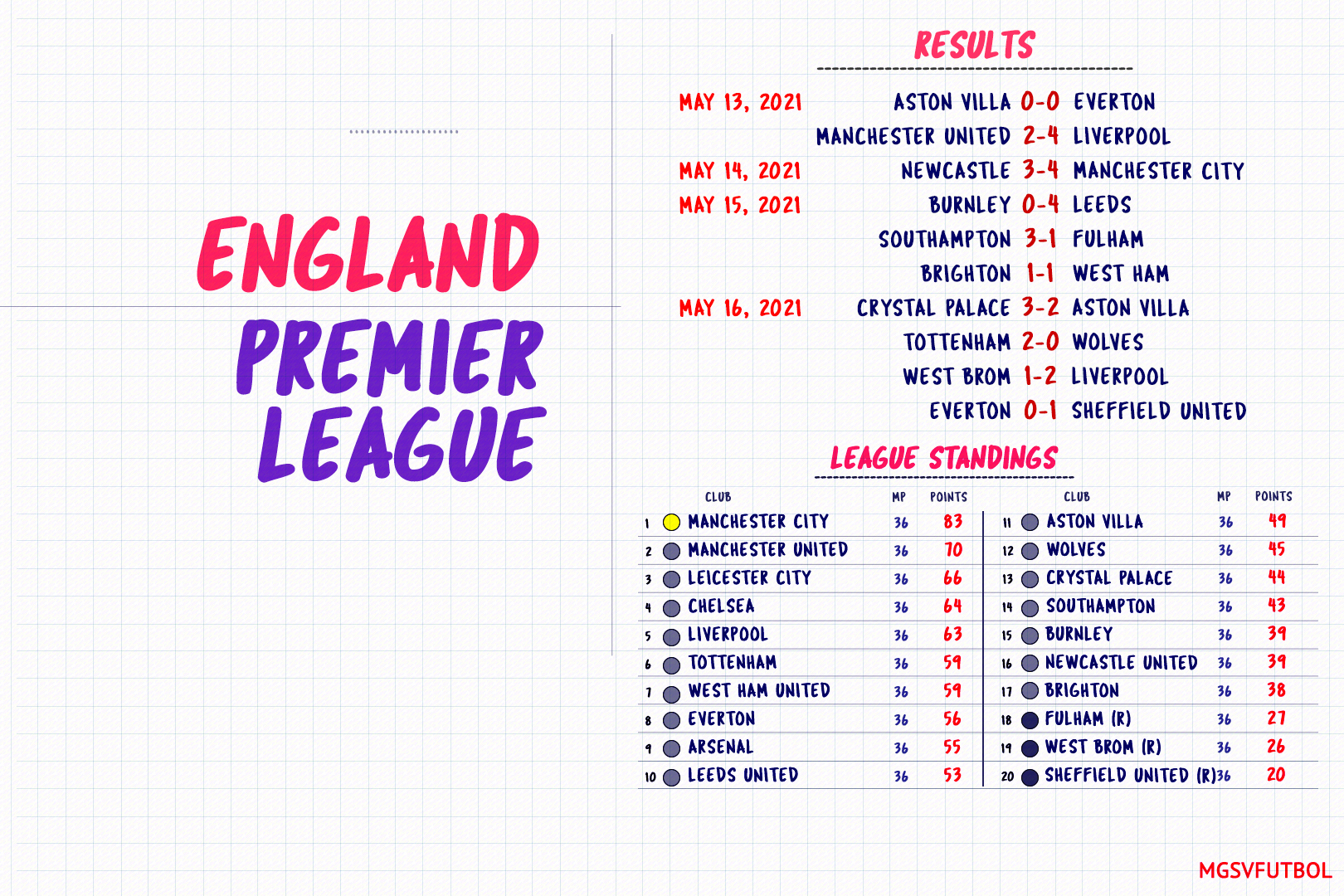 Manchester City was the winner in a 7-goal thriller with Newcastle United, while Sheffield United took a 1-0 victory against Everton.
Ferran Torres scored a hat-trick for Man City to add a win to their league record by beating Newcastle 4-3, while Everton’s hope to play in a continental football competition took a massive hit after the Sheffield United defeat.

Liverpool moved within touching distance for Champions League football.
Alisson Becker scored a late goal to give Liverpool the win to move a point out of Champions League qualification through a 2-1 victory against relegated West Brom.

The six teams that are participating in continental competitions are finalized with a round more round of the season to go. 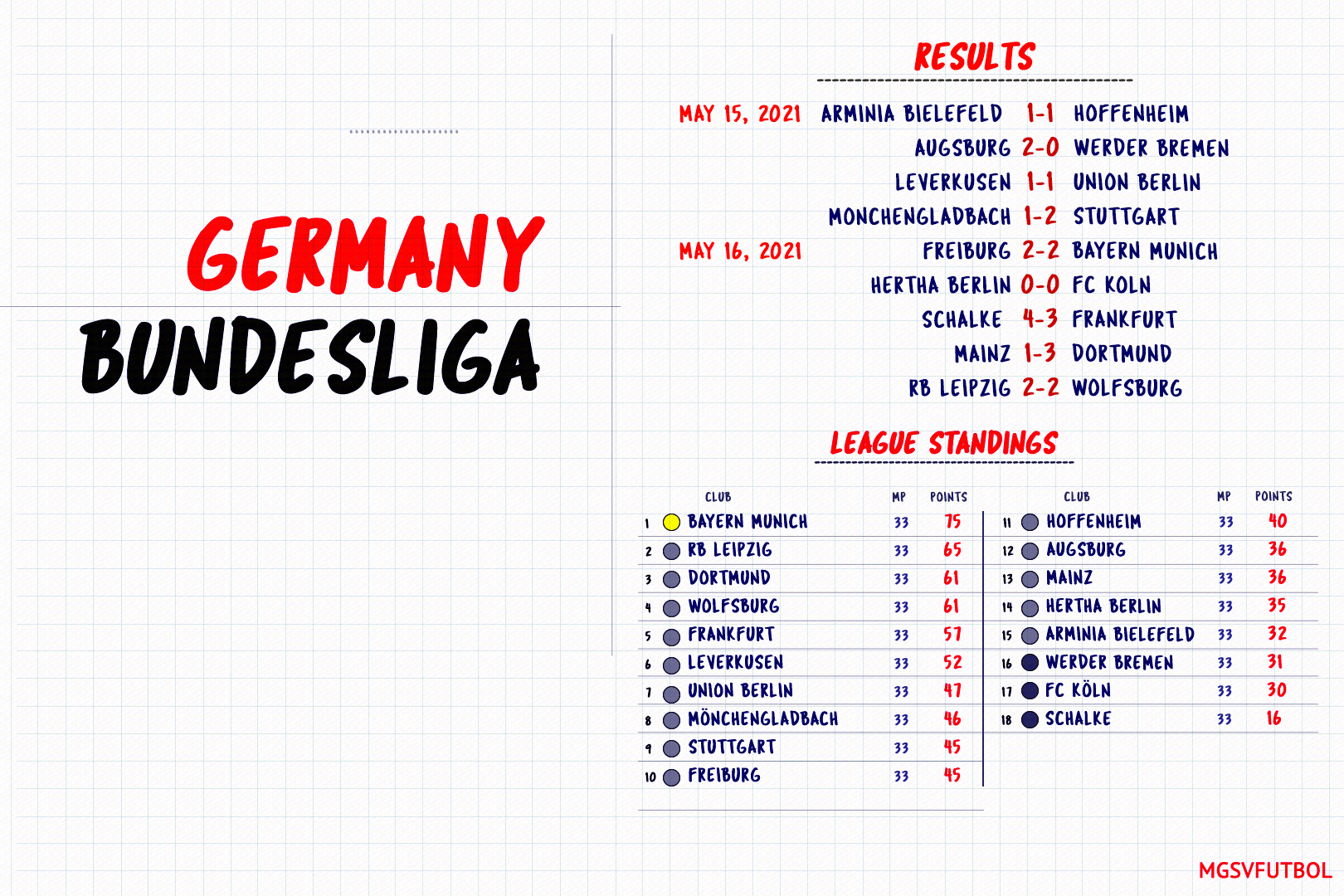 Bayern Munich, RB Leipzig, Dortmund, and Wolfsburg are the four clubs to represent the Bundesliga in the Champions League next season.
Frankfurt and Leverkusen will be in the Europa League.

We made it, qualified for the #UCL ⚫🟡💪🏻 pic.twitter.com/He8iHPFTFI

Both Dortmund and Wolfsburg secured their CL spot on Sunday.
Dortmund secured Champions League football after a 3-1 win at Mainz, while Wolfsburg grabbed a 2-2 draw at Leipzig.

Schalke 4-3 Frankfurt
Schalke picked up a victory that did nothing to help their season, but everything to help both Dortmund’s and Wolfsburg’s chase for Champions League qualification.

Freiburg 2-2 Bayern Munich
In a draw against Freiburg, Robert Lewandowski scored his 40th goal of the season to equal Gerd Muller’s record.
Lewandowski has one more chance to set the new record.

WE’VE DONE IT! #UCL FOOTBALL BACK ON THE MENU BOYS!!!

What we know with a round left to go in the La Liga is that the title will remain in Madrid.
Atletico Madrid is getting crowned as champions, or Real Madrid is keeping the title. 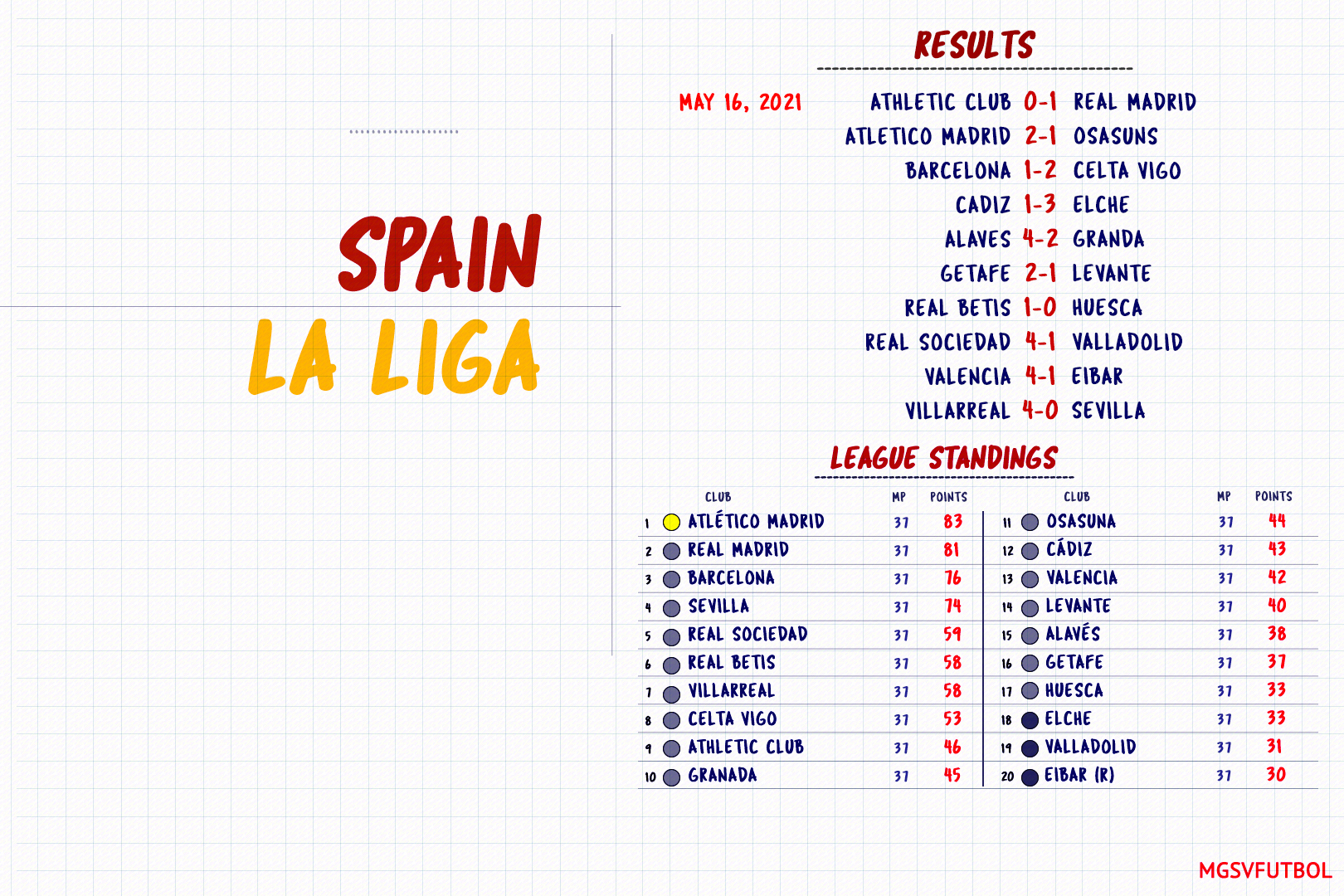 There were no positional changes in the top four but the top two teams were on the winning end of the score, will the other two suffered defeat.

Sevilla was hammered 4-0 at Villarreal, while Barcelona was beaten at home by Celta Vigo.

Atletico Madrid scored two goals in the final 10 minutes of regulation time to come from a goal down and win their match against Osasuna. It was a required victory for Atletico Madrid to keep top spot after Real Madrid took the lead in their game against Athletic Club.

Lionel Messi scored goal #30 of the season but as it has been in recent weeks (and months) Barcelona blew a lead and the opportunity.

The other end of the league standings is open.
Valladolid will need to win against Atletico Madrid to stand a chance on the last day of the season.
Elche will need a win against Athletic Club.
Huesca are only safe if Elche and Valladolid are beaten.
Huesca will host Valencia on the final day. As expected, a win will do for them as well.

Real Madrid will play against a Villarreal side coming into the game after thrashing a top four side.

Levante vs Cadiz is scheduled to be played two day before the other fixtures.

The final day of the season is May 23, 2021
Real Valladolid vs Atletico Madrid
Real Madrid vs Villarreal
Elche vs Athletic Club
Huesca vs Valencia
Celta Vigo vs Real Betis
Eibar vs Barcelona
Granada vs Getafe
Osasuna vs Real Sociedad
Sevilla vs Alaves.

THE FRENCH LIGUE 1
On a day that a win would’ve made them champions, Lille was held to a goalless draw at home by Saint-Etienne.
Paris St. Germain used a 4-o win against Reims to take the title race to the final day of the season.
Goal difference ruled Monaco out of the title but not out for finishing with the most points in the league. 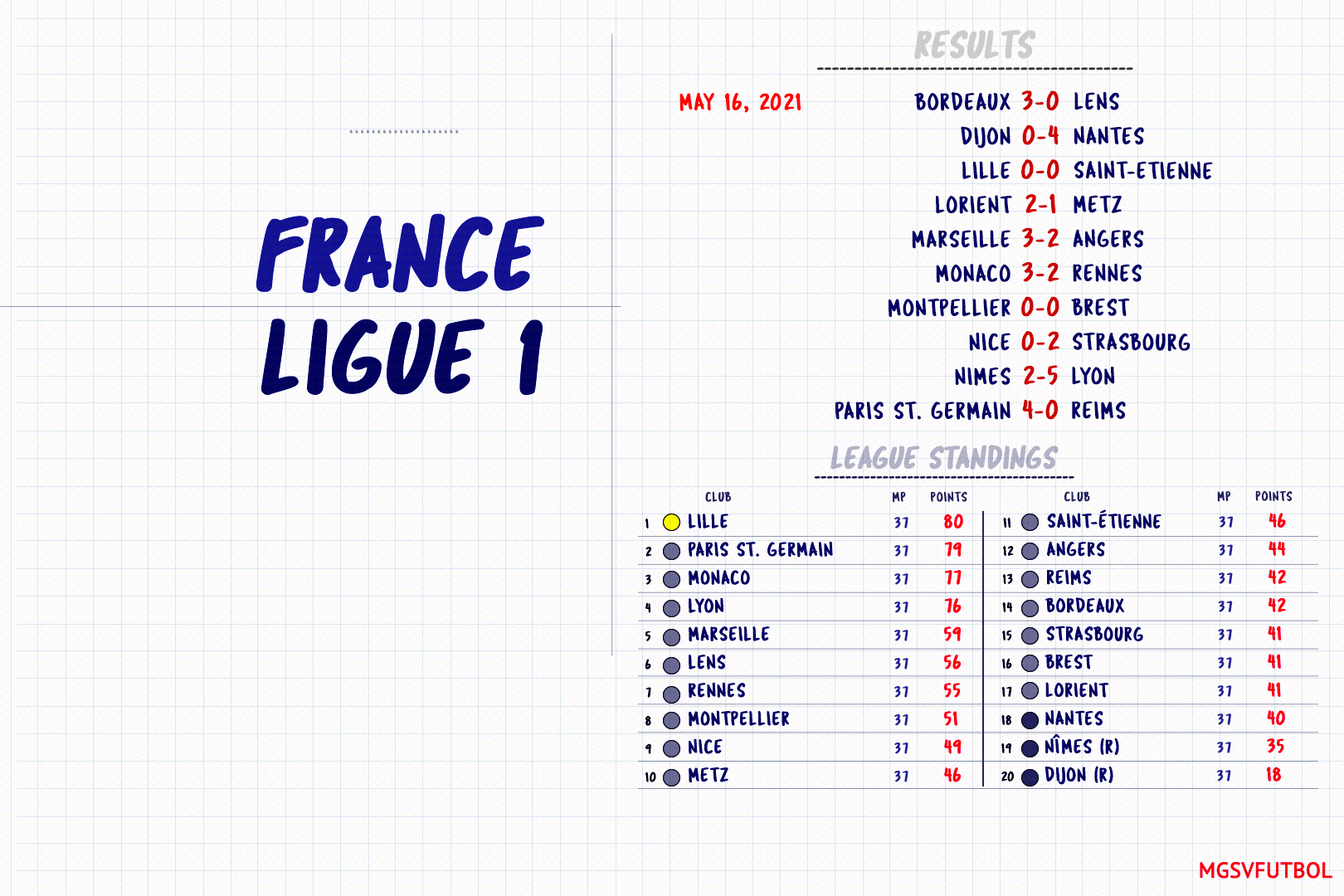 Nimes got relegated after a 5-2 defeat to Lyon.
Nantes will make a push on the last day of the season to skip relegation playoffs.

May 23, 2021
Angers vs Lille
Brest vs Paris St. Germain
Lens vs Monaco (for the hopefuls)

The ITALIAN SERIE A 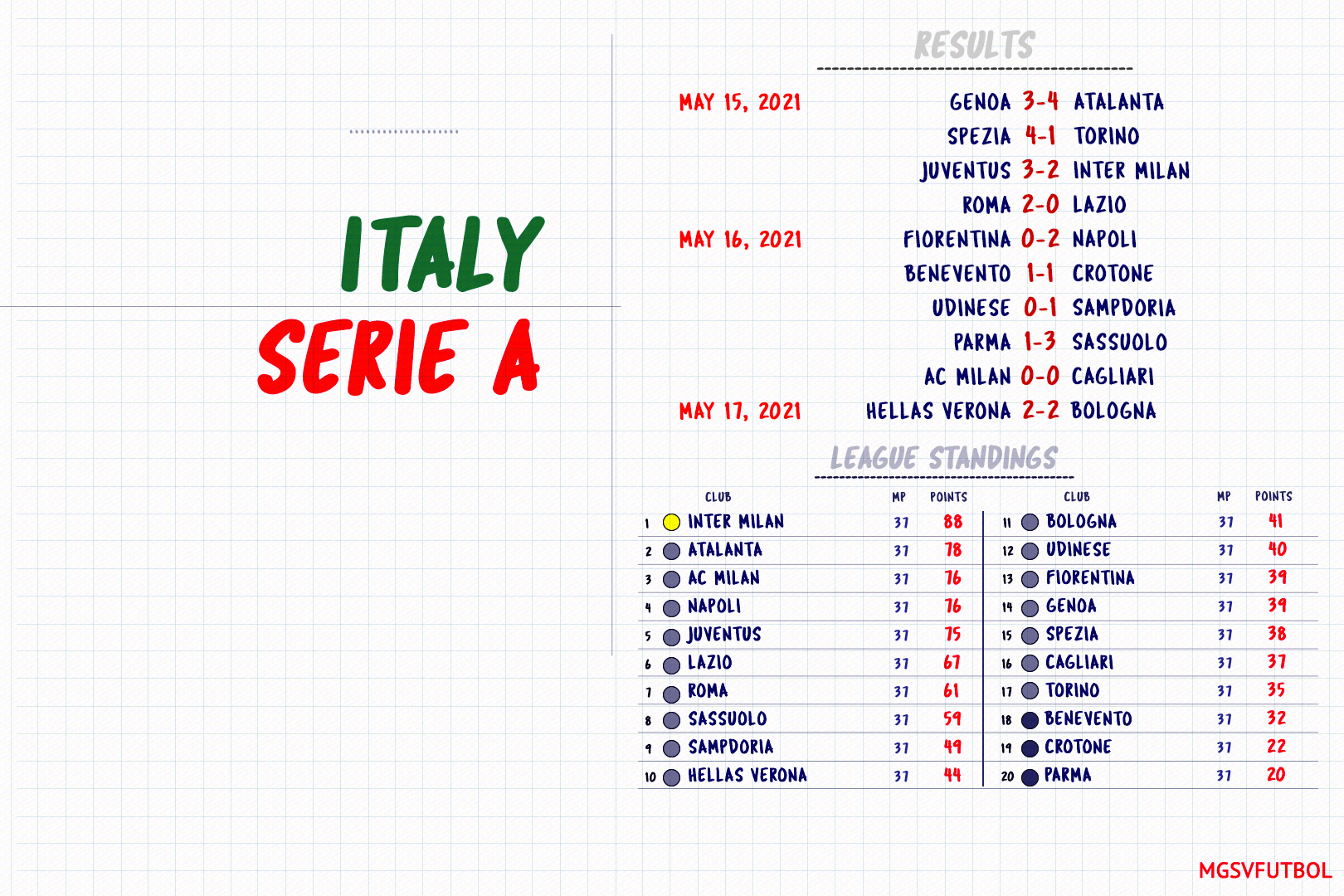 Atalanta joined Inter Milan as the teams representing Serie A in the Champions League.
AC Milan missed out on the opportunity to qualify for the Champion League after failing to get a win at home against Cagliari.

With one more round to go, the final two Champions League spots left in the league will be contested for by AC Milan, Napoli, and Juventus.

Of the three teams that are in the contest, Juventus will be the biggest disappointment to not make it to next season’s Champions League competition.

Should Torino pick up a point against Lazio from their outstanding match, they will relegate Benevento.
If not, they will go against Benevento on the final day of the season. A point will also do in that game.