HIGHLIGHTED FIXTURES FOR THE COMING WEEKEND

There is a North London derby and a Seville derby in the scheduled fixtures for the coming weekend.
Bayern Munich and Lille have a narrow lead to keep in their respective title races.
Monchengladbach and Sevilla need to find their form.
Atletico Madrid, Barcelona, and Real Madrid are taking on relegation threatened teams this weekend.
AC Milan has to find a way around Napoli to kill the odds of Inter Milan widening the lead in the Italian Serie A.
A win and ideal results from surrounding games will get Paris St. Germain back tot he top of the Ligue 1 standings. 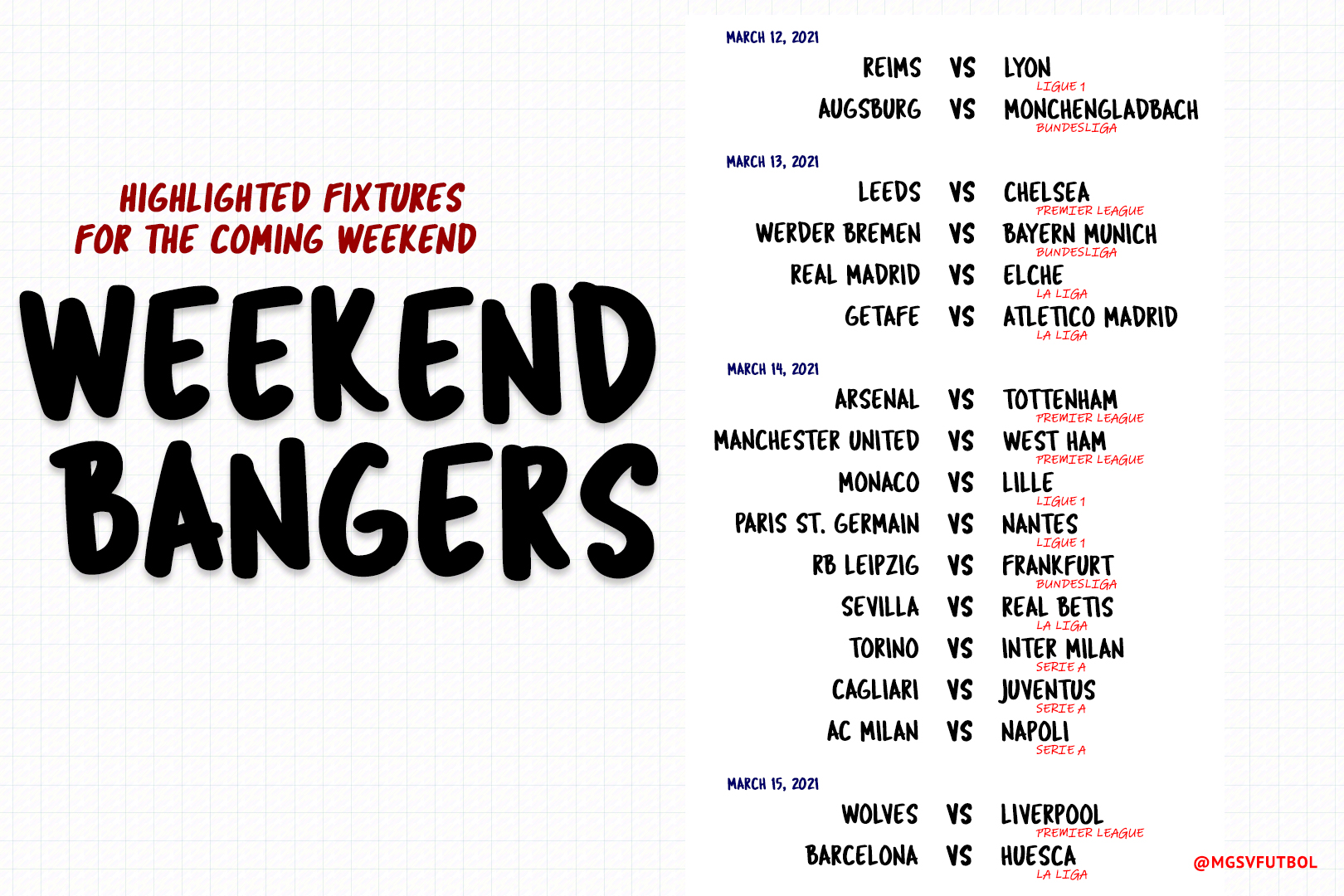 Bayern Munich’s 2-point lead in the race is safer with a win against Werder Bremen. With RB Leipzig involved in a stiffer test, Bayern will look at this like a great chance to widen their lead.

Real Madrid will be looking to make up for the points dropped in the Madrid derby when they host Elche. However, points were dropped by Real Madrid when they faced Elche in the reversed fixture. Elche are fighting relegation while Real Madrid are fighting to be in contention to defend the league title.

Getafe has 1 win in 8 games (6 defeats). It should be clear cut. A win against a Getafe is needed for Atletico Madrid to protect the 6-point lead they have in the title race. 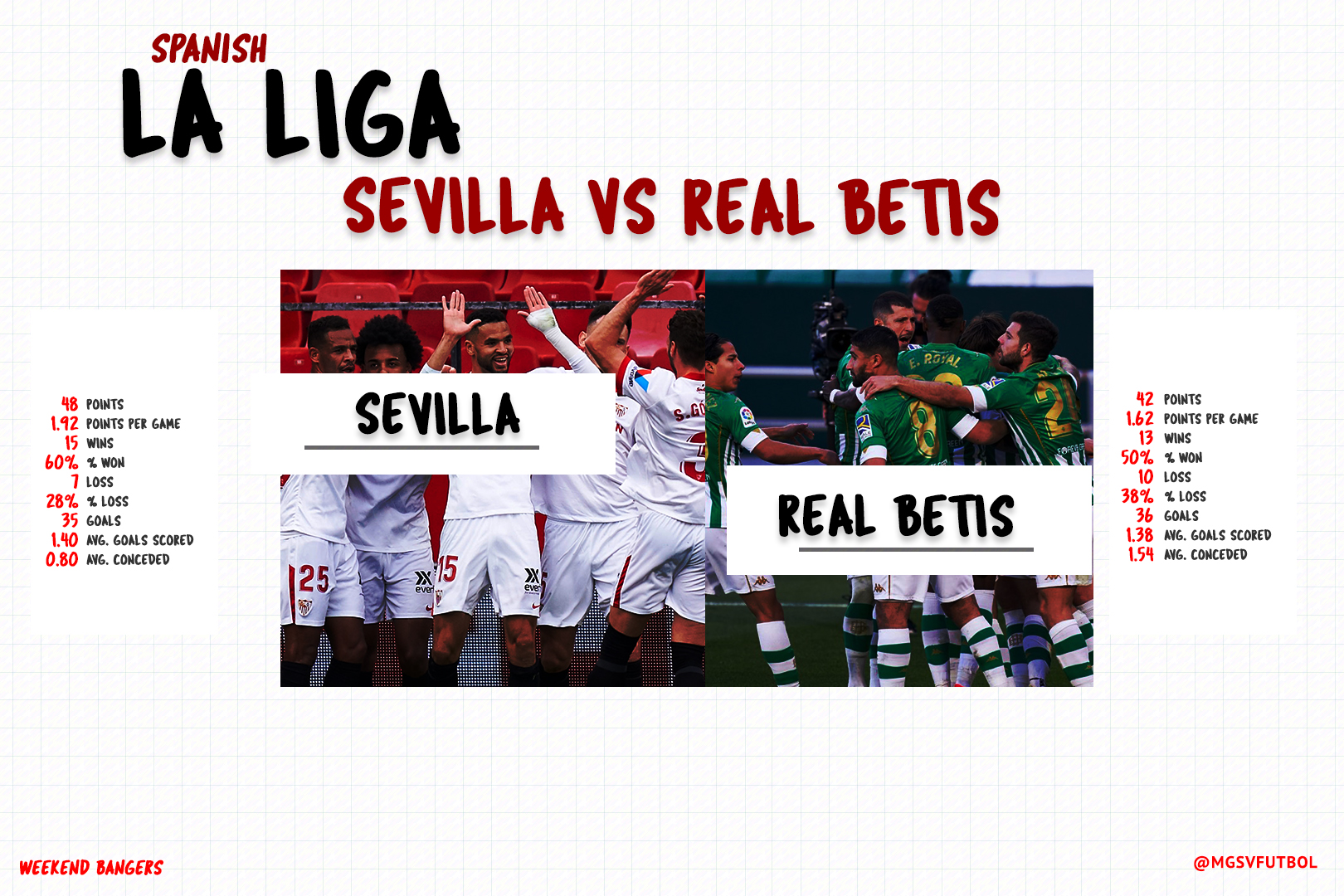 Despite having a game in hand, and being 6 points ahead, and having won the last two meetings; Sevilla will be desperate for a win in this Seville derby.

After 9 straight wins in all competitions, Sevilla have only managed a single win in their last 5. In this period, they’ve been eliminated from the Champions League (Round of 16); and from the Copa del Rey (semifinal) despite coming into the second leg with a 2-0 lead.

On the other hand, Real Betis Betis has been picking up the needed wins along the way. They come into the tie on the back of 4 straight wins; with their only defeat in their last 14 competitive games coming against Barcelona.

With the top three teams will be involved in ties against teams that are circulating around the bottom end of the standings. Sevilla is 4th, 6 points away from 3rd at the moment. The risk of falling further from the top three is high for Sevilla if they don’t get off their recent form.

Lyon are three points from the top of Ligue 1.
A win at Reims will put them in position to take advantage of any potential slip ups from the teams above. Reims will be hoping for a result to kick start a winning streak after ending a streak of 5 league games without a win in the last round. (1-2 win at Nantes).

It’s been 10 seasons since Lille were the French champions.
Since then, only three teams have won the French title. (Montpellier, Paris St. Germain and Monaco).

There is an opportunity for Lille to mark the 10th anniversary of their 5th league title with the celebration of their 6th league title. A 2-point lead in the current French Ligue 1 title race will be at risk in Monaco this weekend.

A win will be required for Lille to guarantee they stay in the lead in the Ligue 1 title race. Lille travel to Monaco to face a Monaco side that is coming into the match on the back of suffering their first league defeat 12 games.

Monaco will be looking to make up for their defeat at Strasbourg when they host Lille, while Lille will be gunning for a win to avoid losing their 2-point lead in the title race.
Paris St. Germain and Lyon will look for wins in their respective games to take advantage of a Lille defeat.

Despite being midtable, Leeds United have 1 win in their last five league games.
Chelsea are heavy favorites.
Thomas Tuchel’s Chelsea remain unbeaten.
They are 4th in the league and are on track to finish on the podium. 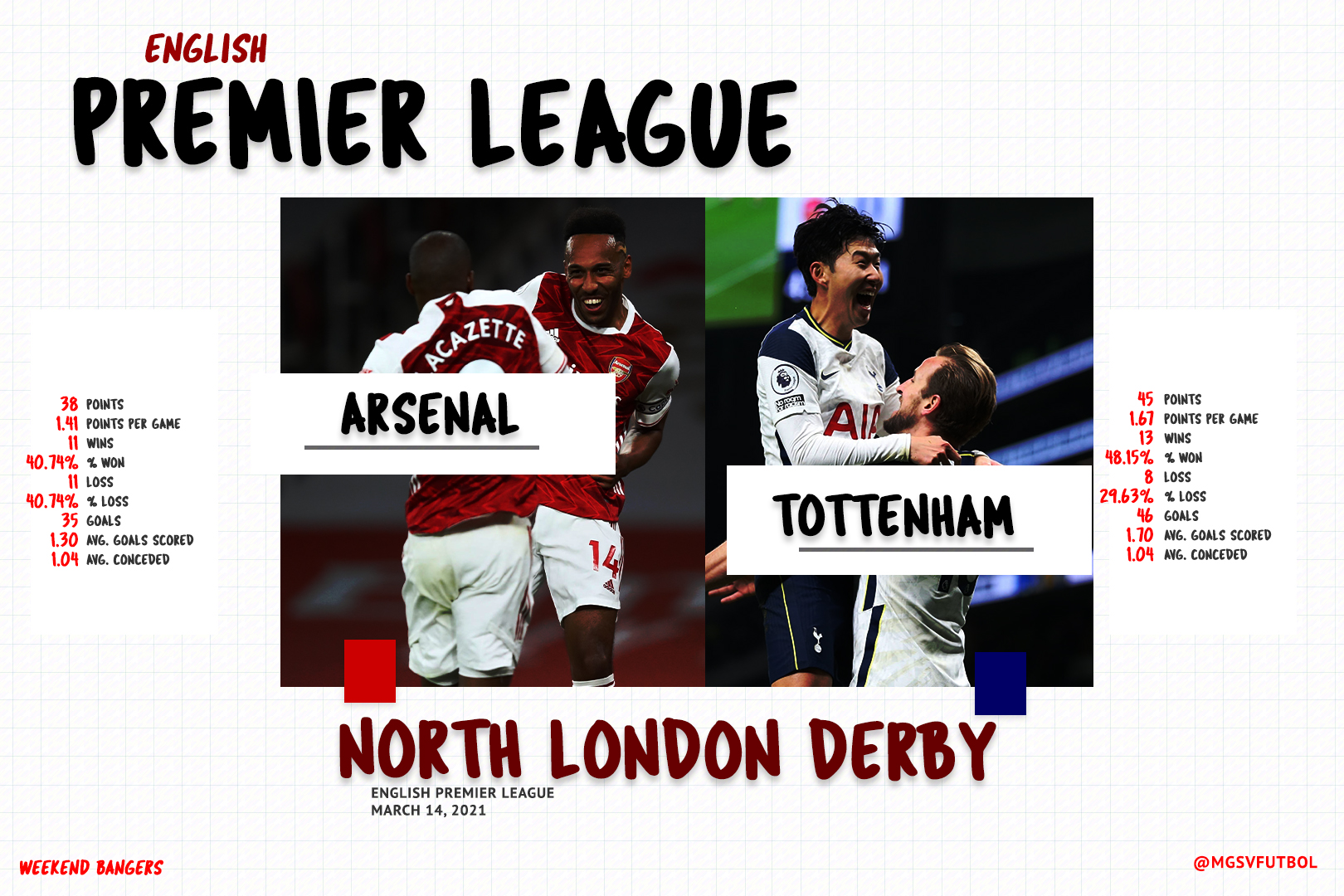 A North London derby. Tottenham will move 10 points clear off Arsenal with a league double. Their meeting earlier in the season was 2-0 win for Tottenham. Arsenal haven’t won any of the last 4 derbies (losing the last two).

A defeat at home for Arsenal will mark 3 successive North London derby losses.

They both had a good night in their Europa League ties over the week but in the Premier League, Tottenham are coming into the game on the back of a 4-1 win against Crystal Palace, while Arsenal come into the game after dropping points at Burnley in a ‘1-1’ draw.

West Ham are touching distance from a Champions League qualification spot. They have a game in hand and are 2 points from the ‘top 4’.

Manchester United are coming into this match after defeating the league leaders in a derby. To guarantee they stay at second place in the standings, Manchester United must beat West Ham at Old Trafford.

With Everton and Tottenham on their tails, West Ham can’t afford a defeat either. Both teams will want the points to avoid falling from their current position in the Premier League standings. (It’s a slippery slope).

Liverpool are away from home; so they might pick up a win? Liverpool travel to face a Wolverhampton side that is also desperately looking to find positive results.

Inter Milan go to Turin for a win. Inter Milan are looking to keep and possibly widen their 6-point lead in the Serie A title race. They travel to face a relegation-zoned Torino.

Juventus will travel to face a relegation-threatened Cagliari.

Both Inter Milan and Juventus will be looking to take advantage of the ‘AC Milan vs Napoli’ results.
No matter the outcome at the end of the season, AC Milan’s season will be viewed as progress. A defeat in the Milan derby and points dropped in other fixtures have cost AC Milan the lead in the title race.

The fixture line-up for Napoli will be testing.
Their next three Serie A fixtures are away from home to teams that are contesting with them for the ‘top 4’ finish in the league standings.

They go to San Siro to play against a AC Milan team that has been title contenders for the entirety of the season so far.
Then to Turin to play against the defending champions; Juventus.
Then to Stadio Olimpico, Rome against a Roma side in search for a finish in a ‘Champions League’ qualifying spot.