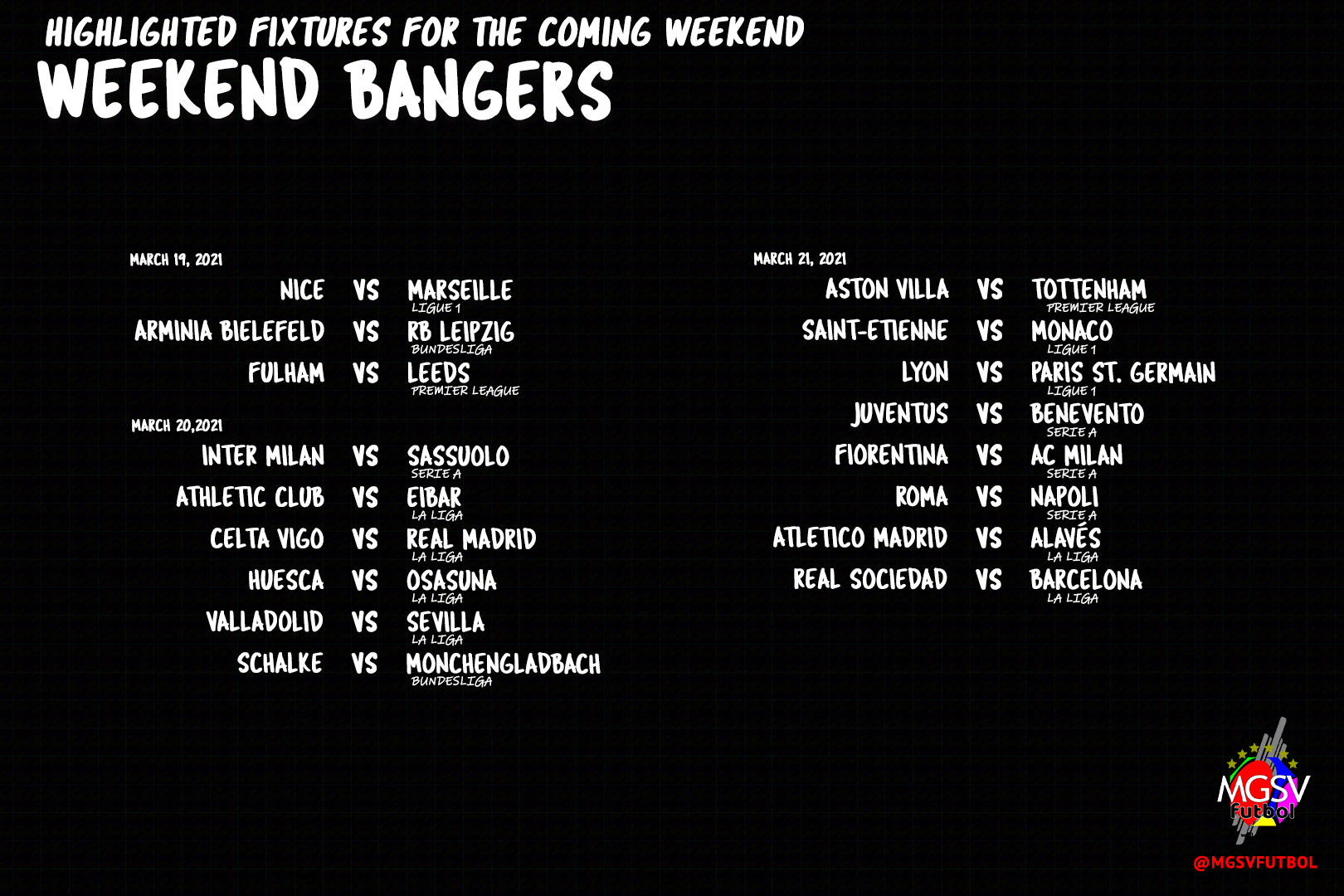 As bad as results have been for Monchengaldbach in recent weeks, their form can’t be compared to that of Schalke’s.

We are 25 rounds into the Bundesliga season and Schalke are bottom of the league with single win all season.

Schalke being the prime relegation candidate should make it the perfect opportunity for Monchengladbach to get back on the winning track.

Lille can benefit from this.
29 games played, 20 points each.
Lyon and Paris St. Germain are both three points from the top of the Ligue 1 standings.
Lyon too a 1-0 win in Paris from the reverse fixture.
It will be up to Paris St. Germain to make up for the points dropped.

The reverse fixture was a 4-0 Napoli win. So Roma has a lot to be concerned about.
Napoli are coming into this match after a win at San Siro against AC Milan, while Roma are coming into this match after a shock ‘2-0’ defeat at Parma.
Napoli has a game in hand but are equal on points with Roma.
They go to Rome for a win that will give them a 3-point clearance and a game advantage.

Atletico Madrid are left to chase the league title after being eliminated from all other tournaments.
After exiting the Champions League against Chelsea, it is up to Atletico to ensure they don’t lose their grip on the La Liga title race.

In ‘Week 21’, the teams in the Champions League qualifying positions had a game in hand except for Atletico Madrid, who had 2 games in hand.

Atletcio were 10 points clear at the top of the Spanish La Liga standings with an extra game in hand.

Now that all the clubs have played out their games, Atletico Madrid’s lead has shrunk to 4 points.

ALAVES
Granted that Alaves managed to pick up an away win against Real Madrid earlier in the season, the bulk of Alaves wins in La Liga has been against the peers in the relegation battles.

Despite ending 4 successive defeats with a draw against Cadiz in the last round, Alaves will go into this match as a team without a win from their last 5 league games.

Unless Alaves have another evening in Madrid as they did against Real, we don’t see how Atletico Madrid should not get the needed three points from this tie.

EVERTON VS MANCHESTER CITY
Everton are going through a rough patch in the Premier League. Going against the league leaders is not expected to smoothen things out for them.
With Arsenal out of contention, Manchester City are the latest winners of the competition. Manchester City will be looking to get past Everton and get closer to their 7th FA Cup title. The last time Everton won the FA Cup was in 1995; and it would take a lot from the day to see them stay alive in the competition.

CHELSEA VS SHEFFIELD UNITED
Chelsea will be heavy favorites when they host Sheffield United. This fixture is arguably the easiest outcome to predict among the four.
Chelsea were FA Cup champions in 2018, while we’d have to go back 96 years to the last time Sheffield United won the tournament.
There is little chance of Sheffield United avoiding relegation from the Premier League so they might as well put everything in this competition.