WEEKEND BANGERS
The points are vital at any stage of the competition but they seem to grow in value towards the end of the season. It is the final laps for all of the top leagues in Europe.

Five more rounds left in the French Ligue 1 season and also in the German Bundesliga. The English Premier League has 6 more rounds to go, and both the Spanish La Liga and the Italian Serie A have 7 more rounds left.

There are no teams in the German Bundesliga, the French Ligue 1, and the Spanish La Liga with outstanding fixtures.

Both the Italian Serie A, and the English Premier League have two teams with a fixture waiting to be played. 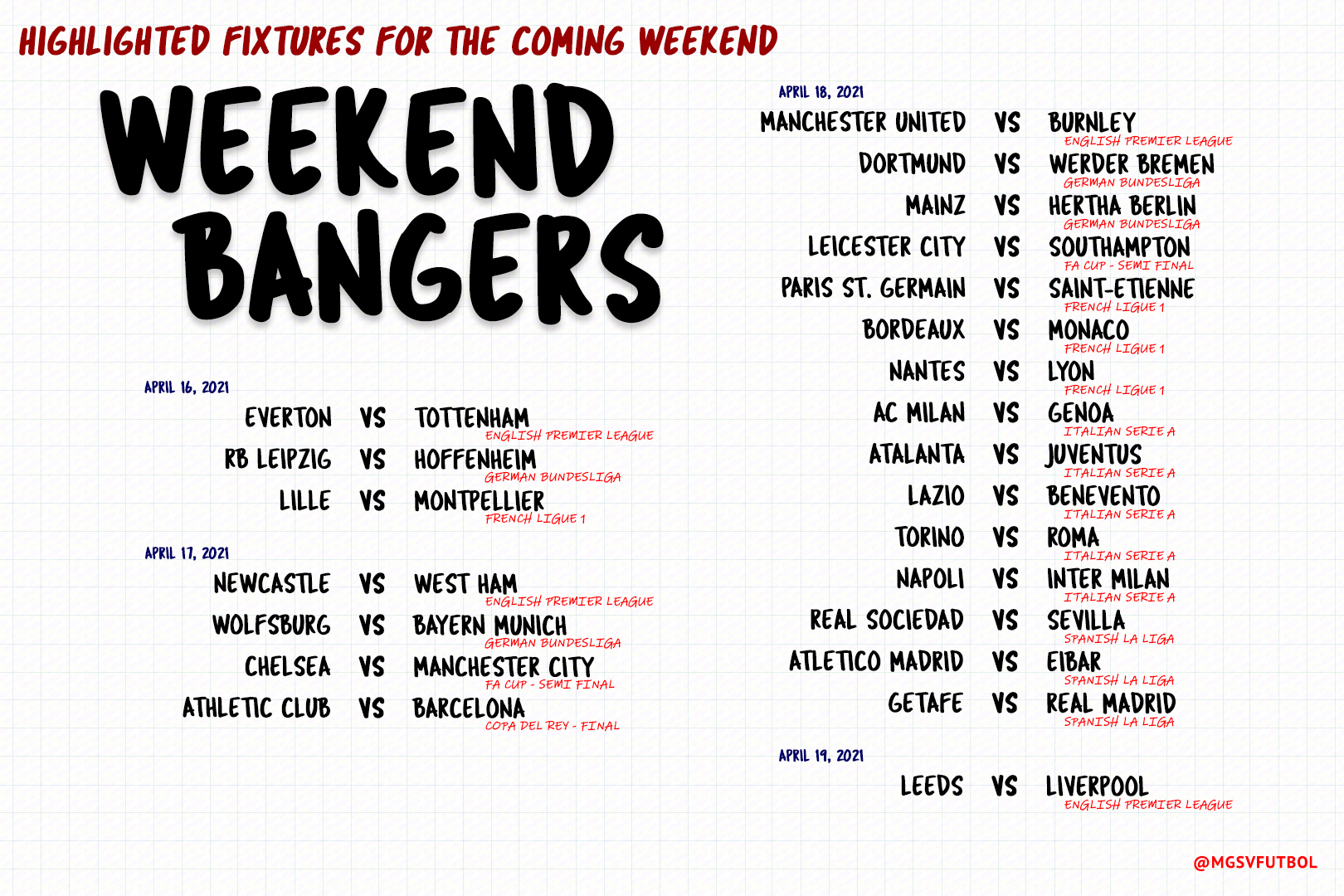 In he Italian Serie A

AC MILAN VS GENOA
It ended in a 2-2 draw in their last meeting but AC Milan can’t afford dropping points at home to Genoa. AC Milan might have fumbled a chance to win the league but there is still Champions League football qualification to chase. Finished second will be an improvement.

ATALANTA VS JUVENTUS
A point separates Atalanta from Juventus in the league standings.
A draw will leave Atalanta open to the possibility of Napoli to close in or leap above them, while a win will send them a point above Juventus to third.
Juventus will use a win to jump to second if AC Milan fails to pick up a win at home against Genoa.

NAPOLI VS INTER MILAN
Napoli will host league leaders Inter Milan.
Inter Milan’s target remains the same; win the league title after over 10 years of trying.
Napoli’s ambition is Champions League qualification through the league.
Should be a tasty fixture. It was a 1-0 win for Inter Milan in the reverse fixture. A Romelu Lukuaku penalty decided it.

Spanish COPA DEL REY FINAL
ATHLETIC CLUB VS BARCELONA
Two weeks after losing the 2020 Copa del Rey final in a 1-0 defeat against Real Sociedad, Athletic Club are back to challenge for the 2021 Copa del Rey final. This time they will be going up against Barcelona.

Anything can happen in cup football.
On paper, Leicester City are favorites to reach the FA Cup final at Southampton’s expense, while Chelsea and Manchester City will be expected to be in a tighter contest for the other spot in the FA Cup final.

LILLE VS MONTPELLIER
Lille’s chase for the silverware will continue at home against Montpellier.
They have a 3-point lead but goal difference does not allow for them not to keep that lead.
It was a 3-2 win for Lille in the reverse fixture.

PARIS ST. GERMAIN VS SAINT-ETIENNE
After qualifying for the semifinals of the Champions League, Paris St. Germain will be looking for a win against Saint-Etienne to put the pressure on Lille. A win was also important for Paris St. Germain to keep their position in the standings.
It was a 1-1 draw in the reverse fixture.

BORDEAUX VS MONACO
Should Paris St. Germain fail to pick up the maximum points, Monaco will be second in the standings with their 4th straight league win.
Monaco takes on a Bordeaux side that have lost their three recent games; with their only win from their last 11 league games coming against bottom table Dijon.
It was a 4-0 win for Monaco in the reverse fixture.

NANTES VS LYON
Lyon should be taking the opportunity against relegation-zoned Nantes.
A victory for Lyon could see them climb as high as to second place in the standings.
It was a 3-0 win for Lyon in the reverse fixture.

In the English Premier League …

EVERTON VS TOTTENHAM
Their last fixture was in the FA Cup, where Everton eliminated Tottenham in a 5-4 win after extra time. Their last league game was Everton picking up a ‘1-0’ away win.
Everton are with a game in hand and a point below Tottenham in the current league standings. Both teams have had disappointing results from their recent matches.

NEWCASTLE VS WEST HAM
While Newcastle look for a late surge to fully escape relegation threat, West Ham are looking for another win to help them seal Champions League football in the coming season.
West Ham will go to Newcastle in search for their third successive league win since dropping points against Arsenal.

LEEDS UNITED VS LIVERPOOL
Liverpool are still touching distance from Champions League qualification through the league. Their quarter final elimination from the Champions League has increased the importance of finishing in the ‘top 4’ for Liverpool.
It was a 4-3 win for Liverpool in the reverse leg.
Leeds are coming to this game on the back of a win against Manchester City.

In the Spanish La Liga …

REAL SOCIEDAD VS SEVILLA
Sevilla are hovering around the core of the title race.
A win against Real Sociedad will help Sevilla’s odds of being a firm member of the current league title race.

ATLETICO MADRID VS EIBAR
First vs Last.
With just a win from their last four league games, Atletico Madrid will be relieved to have their hands on a team at the bare bottom of the league standings.
Recent poor results have allowed Atletico Madrid’s lead to be chipped down to a single point.
A win against Eibar is a must for Atletico Madrid to remain top of the standings at the end of the round.

GETAFE VS REAL MADRID
Real Madrid are a point from the top of the table. They come into this game after an El Clasico victory and after clinching a place in the Champions League semi finals.
A win against Getafe could put Real Madrid at the top of the league table if Atletico Madrid does not come out of their fixture with a win.
It was a 2-0 win for Real Madrid in the last meeting of the two.

In the German Bundesliga …

RB LEIPZIG VS HOFFENHEIM
At 5 points behind Bayern Munich in the Bundesliga title race, RB Leipzig are the only team in the league that can keep the title race competitive in the final 6 rounds. A win over Hoffenheim will do just that.
Hoffenheim ended a run of three games without wins in a goalless draw with Leverkusen in the last round. It is fair to expect Hoffenhiem to do the necessary to avoid going back to starting another losing streak.

WOLFSBURG VS BAYERN MUNICH
It will be a new low for Bayern Munich when they go to Wolfsburg.
In their last three games, Bayern have had their lead in the title race reduced after dropping points in the last round to Union Berlin, and have also been eliminated from the UEFA Champions League in Paris.
Bayern are taking on a Wolfsburg side that are looking for their own Champions League qualification through the league. Wolfsburg are in 3rd and 11 points from the top; and they need a win to guarantee they stay in 3rd place at the end of the round.
With RB Leipzig opening the round with Hoffenheim, Bayern Munich will go into this fixture knowing the results they need. A win for RB Leipzig will only mean that Bayern Munich must get a win to avoid narrowing their lead.

DORTMUND VS WERDER BREMEN
Dortmund are 7 points away from Champions League qualification through the Bundesliga. They will need a victory at home against Werder Bremen to help their chances of bridging the gap.
Werder Bremen’s last 4 league games have all ended in defeat, so Dortmund should be hopeful for the three points.

MAINZ VS HERTHA BERLIN
Two relegation threatened teams go at each other.