AFTER ROUND 25 OF THE SPANISH LA LIGA


Atletico Madrid pulled 5 points clear with a game in hand.
Real Sociedad moved a point closer to the top four.
Huesca gained a point to make the relegation battle as exciting as the title race. 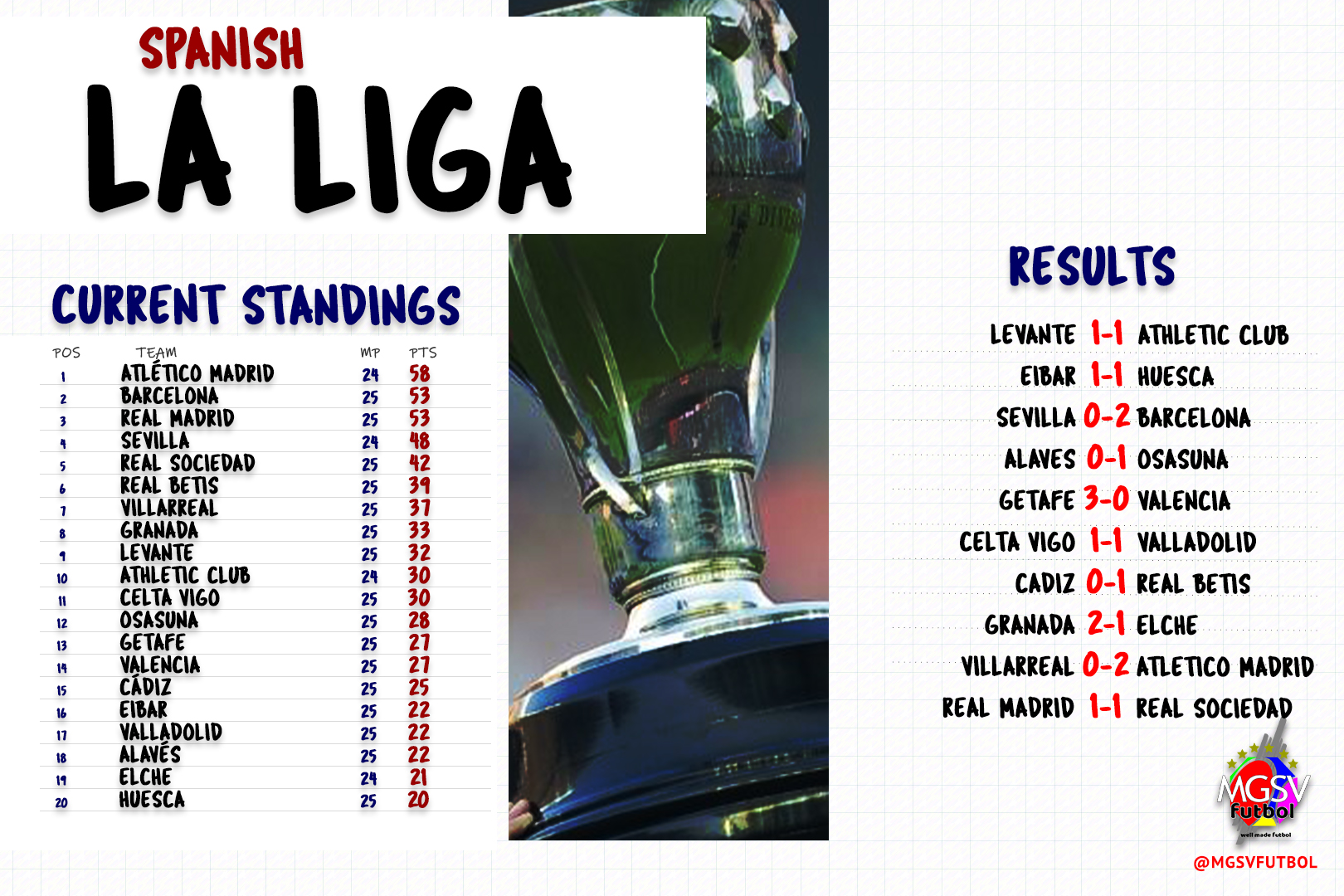 
Levante and Athletic Club shared the points after a 1-1 draw. Both teams got their goals from the penalty spot.

Huesca remains bottom of the table after a 1-1 draw against Eibar. Sandro Ramirez’s lead for Huesca barely lasted a minute. Pape Diop headed in the equalizer in the 83rd minute to get Eibar a point at home.

Barcelona took three points in Seville. Ousmane Dembele and Lionel Messi scored the goals Barcelona needed to get the three points from a Sevilla team that had won their last 6 matches coming into the tie.
The two will meet again on Wednesday for the second leg of the Copa del Rey semi final. Sevilla leads 2-0 from the first leg. A win for Sevilla in this fixture would have put them above Barcelona while having a game in hand.

Osasuna used a 1-0 win at Alaves to open a 6-point gap between the two teams in the standings.
Valencia went down a goal about 6 minutes before the break, and went down a man 6 minutes after the break. They ended up leaving a s 3-0 losers against Getafe. The result allowed Getafe to match Valencia in points accumulated.


Jeison Murillo’s goal in the final minutes of the game against Valladolid saved Celta Vigo from suffering a home defeat (and consecutive defeats) in the league.

Cadiz haven’t had a win in their last 7 league games. Their only draw from their last 6 league games was to Barcelona. After picking up a point at the Camp Nou against Barcelona, Cadiz conceded a late goal to suffer defeat at home to Real Betis.

Granada won their first in 7 in league games after Antonio Puertas goal in the 79th minute separated them for relegation-zoned Elche.

A 2-0 win at Villarreal was Atletico Madrid’s first win in three league games. It was a much needed three points for Diego Simeone and his men.

Real Madrid needed a win at home against REal Sociedad to reclaim second place, but they ended up narrowly escaping defeat. Vinicius Junior’s goal in the 89th minute got Real Madrid on level terms to end the game as a 1-1 draw.