The English PREMIER LEAGUE AFTER ROUND 32 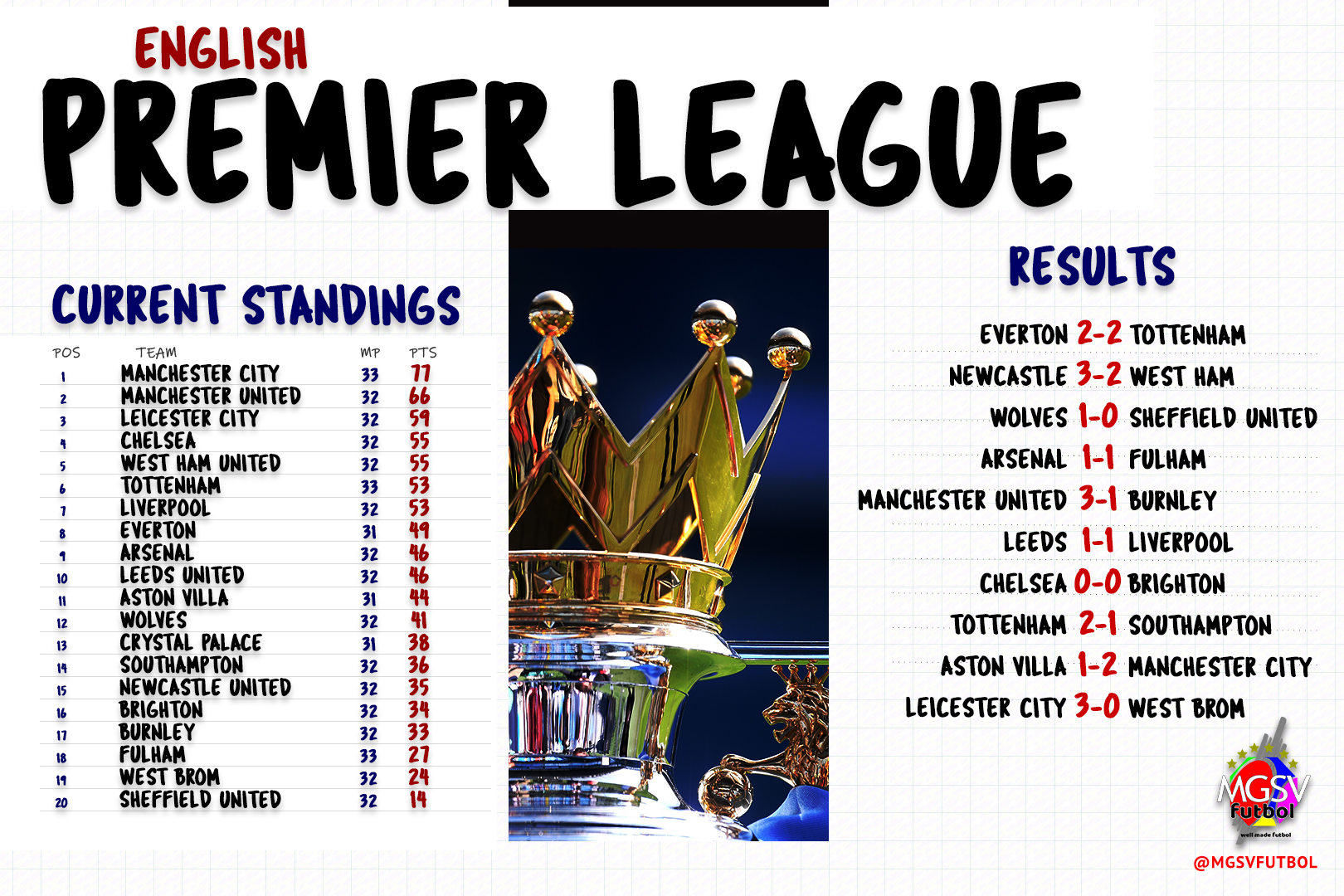 Manchester City are 11 points clear with 5 games left for them to play. The came from a goal down to get a 2-1 win at Aston Villa to move a step closer to the title.
With most teams having 18 points maximum left in the season, an 11 point lead in the title race should be enough for Manchester City.
Manchester United kept hold of second place with a 3-1 win at home against Burnley.
Leicester City kept up with the top two by also picking up three points from a a 3-0 victory against West Brom in the final match of the round.
Chelsea and Liverpool dropped points.
Liverpool gave up a goal lead to leave Leeds with a 1-1 draw, while Chelsea were held to a goalless draw at home by Brighton.
Newcastle boosted their odds in avoiding relegation after a 3-2 win against a 10-man West Ham.
Everton and Tottenham shared the points after a 2-2 draw.
All their results helped Leicester City’s odds of qualifying for Champions League football .

There are now two relegation spots to be filled after Sheffield United claimed the first one.
Sheffield United were relegated after their defeat at Wolves. They had 4 wins in 32 matches while conceding 56 goals to the 17 they scored.
Fulham managed a point away against Arsenal to help in their fight to avoid relegation, but West Brom couldn’t add to their point tally.

The Italian SERIE A AFTER ROUND 32 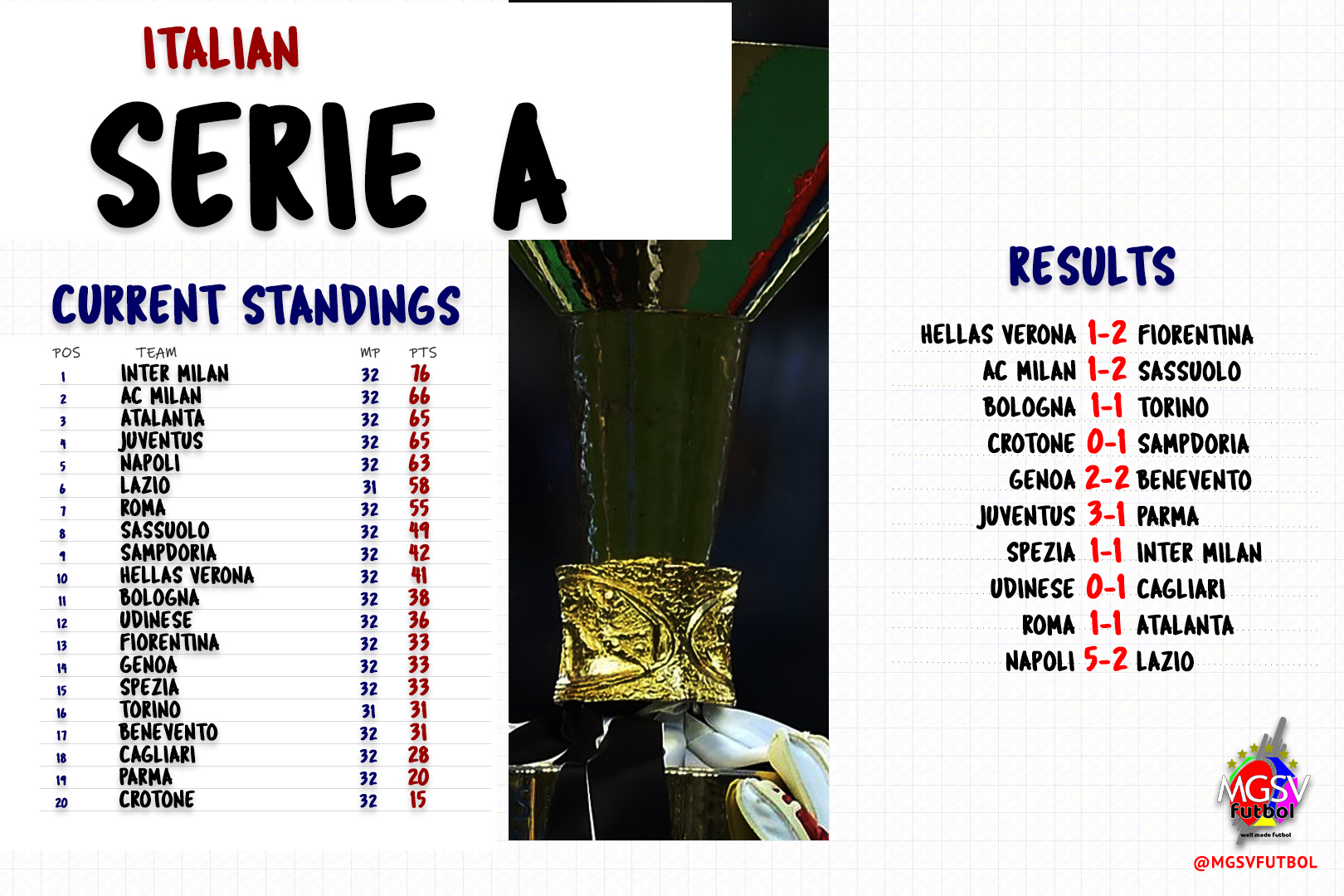 Inter Milan dropped points but managed to gain an extra point in their lead because AC Milan were on the losing end at home.
Inter Milan could only manage a 1-1 draw against Spezia, after AC Milan took a 2-1 defeat at home against Sassuolo.
Atalanta and Roma shared the points in a 1-1 draw.
These results meant Juventus 3-1 win against Parma was the only victory amongst the teams in the Champions League qualifying spots.
Napoli used a 5-2 thrashing of Lazio to stay 2 points outside of the ‘top 4’.
Lazio have a game in hand but are already 4 points clear of their city rival Roma.

Crotone are currently 16 points away from safety with 15 points accumulated so far.
With Cagliari helping themselves with a win against Udinese, Parma’s odds of moving out of the relegation zone is getting slimmer.

The Spanish LA LIGA AFTER ROUND 32 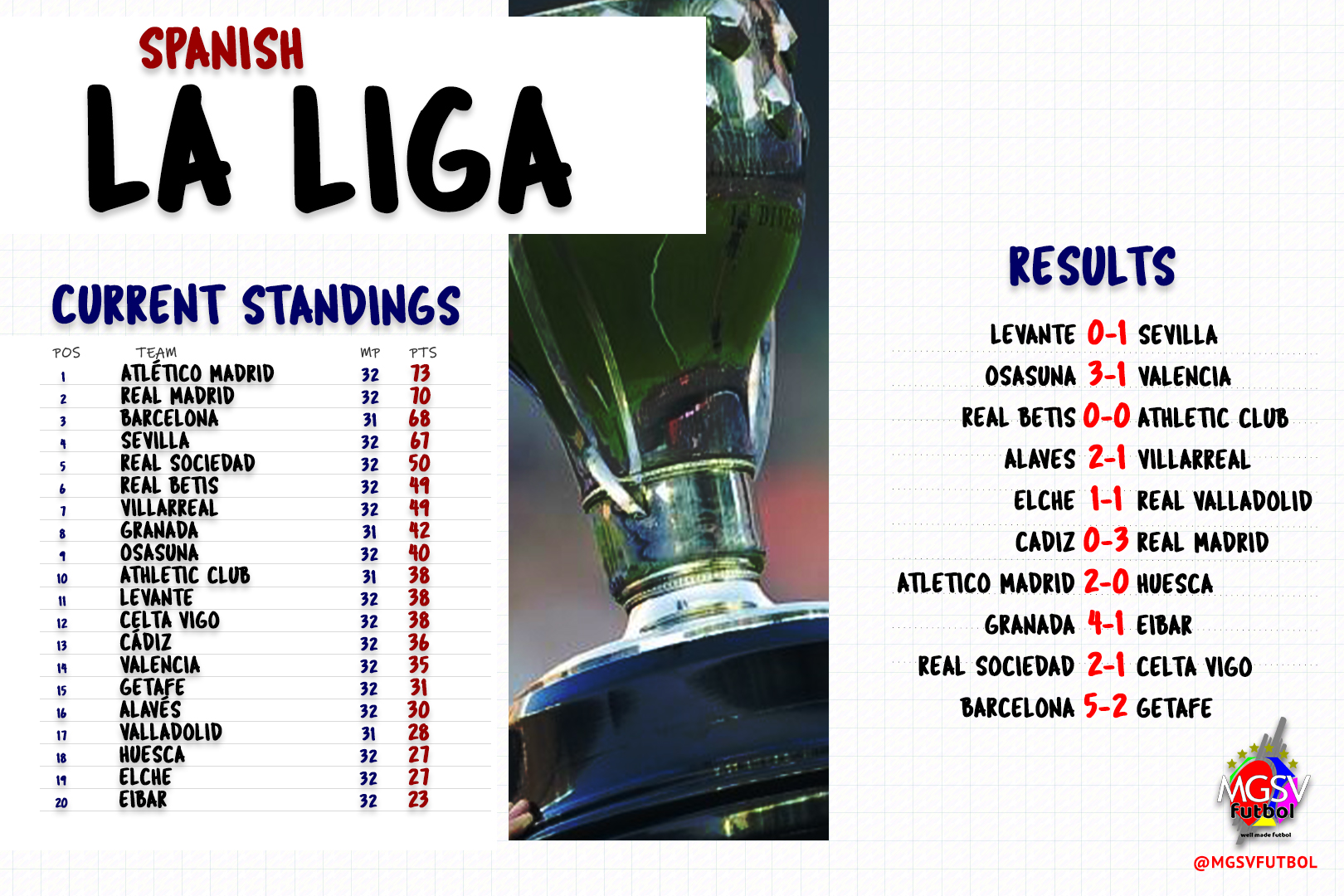 The leading four teams were all winners over the round.
Atletico Madrid lead the title race by 3 points after a 2-0 win over Huesca.
Real Madrid kept up with the pace with a 3-0 win at Cadiz.
Sevilla opened the round with e 1-0 win over Levante.
And Barcelona with a game in hand, ended the round with a 5-2 win against Getafe.

Valladolid moved out of the relegation zone with a point from a 1-1 draw with relegation-zoned Elche. Valladolid have a game in hand to help their fight to avoid the drop.
Huesca replaced Valladolid in the relegation zone after their defeat against Atletico Madrid.
Eibar stayed bottom of the standings without a win; widen the gap between them and 19th to 4 points.