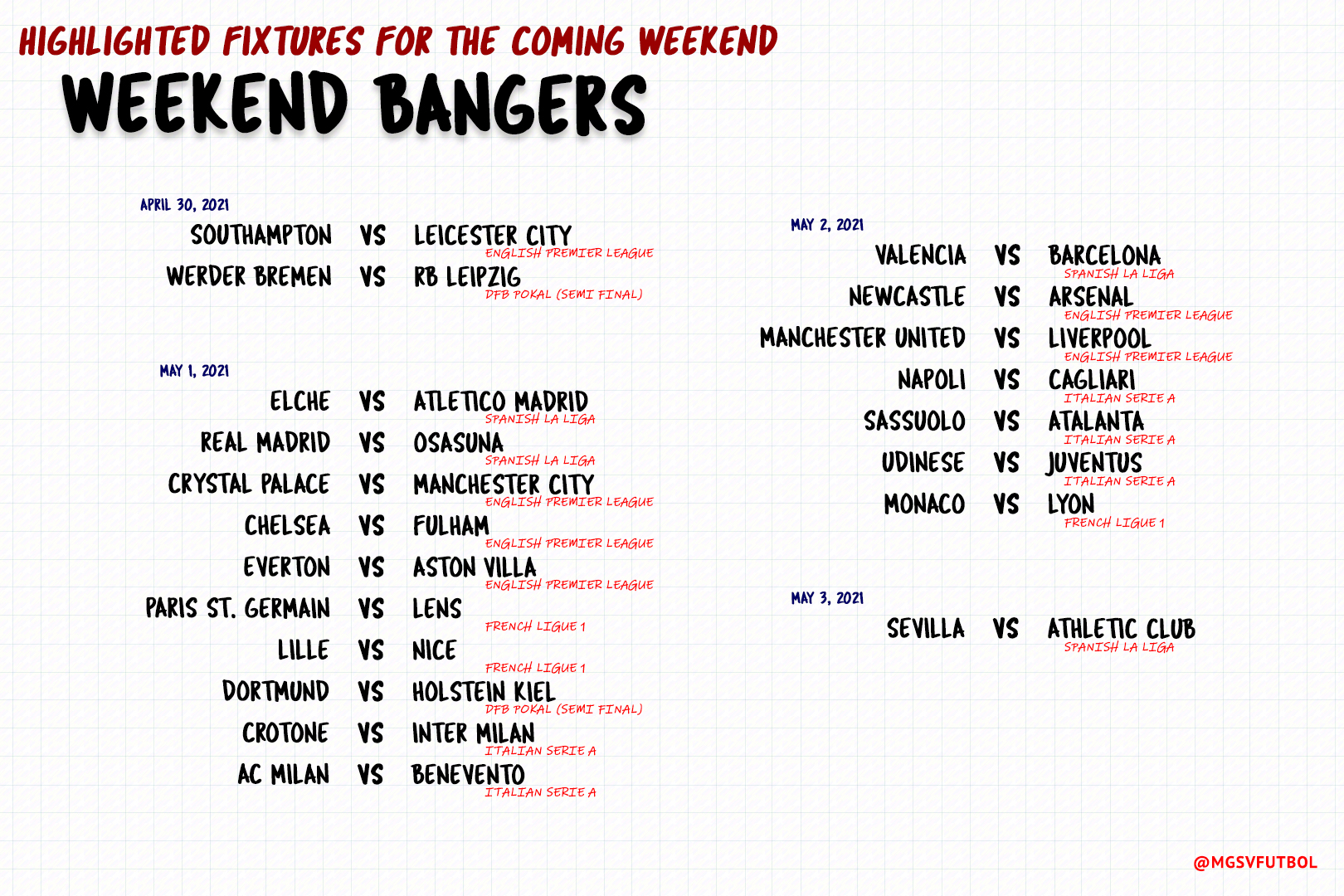 The Weekend Bangers.
The season is nearing an end in the domestic leagues in Europe.
There is no Bundesliga action this weekend, but there is the German Cup semifinal.

Werder Bremen vs RB Leipzig
It will take the most unlikely set of events for RB Leipzig to weasel their way to the Bundesliga title this year. But if you can’t win the German league, the German Cup is a nice consolation. RB Leipzig will book their place in a cup final if they manage to get through Werder Bremen.
Despite not having the best of seasons in the domestic league, Werder Bremen has the best history in this competition amongst the teams left. They are 6-time winners; with their last title coming in 2009. A 7th title will require them to render RB Leipzig trophyless.

Dortmund vs Holstein Kiel
Dortmund is 4x the winners of the competition. Their last title was in 2017.
Holstein Kiel being in the second division of the German football system makes Dortmund the clear favorite in their semi-final fixture.
The expectation will be for Dortmund to get into the final and end their season with a title; since Champions League football qualification for the coming season is still at risk.
For Holstein Kiel, they are the representative for the underdogs. The neutrals and rival teams of the three top division sides will love a success story for Holstein Kiel.
Holstein Kiel got this far by getting a win against Bayern Munich. They eliminated Bayern Munich from the German Cup and ended their dream of defending the treble season.
If they could do it against Bayern Munich, they can do it against any German team.

Four games left.
The gaps between the top three teams stayed as they were.
Lille, Paris St. Germain, and Monaco are all title contenders.

Lille vs Nice
As long as Lille keeps winning, they will be the next French Ligue 1 champions.
The reverse fixture ended in a ‘1-1’ draw. Lille does not have the breathing room to allow for the dropping of points in this match.
It will be a must-win; all matches from this point will be a ‘must-win’ unless the chasing pack fails to pick up the maximum points from their respective fixtures.

Paris St. Germain vs Lens
Should Lille fail to win, Paris St Germain will take the lead with a victory over Lens.
Lens is the best performer outside the ‘top 4’ and hasn’t suffered a league defeat in their last 13 games.
The reverse fixture was a 1-0 win for Lens, so Paris St. Germain will have their work cut out for them.

Monaco vs Lyon
The big match of the round is between Monaco and Lyon.
Lyon blew away a 2-goal lead to suffer a defeat at home to Lille in the last round. They travel to face a Monaco side that has gone 9 games without conceding a goal and are on a streak of 5 league wins.
Lyon is comfortable in 4th place but will need a win here + more to get into the ‘top 3’.

Crystal Palace vs Manchester City
Manchester City is with a 10-point lead and a maximum of 15 points left in the season.
They will visit Crystal Palace for the three points that will move them even closer to reclaiming their crown as English champions.
The last meeting of the two was a 4-0 win for Manchester City. A repeat of the outcome from the reverse leg will mark three successive league defeats for Crystal Palace.

Chelsea vs Fulham
West London derby – Just a local derby for teams on the opposite ends of the league standings with different ambitions and objectives. Chelsea is fighting for Champions League qualification through the league, while Fulham is fighting to survive the relegation battle.

Fulham did not participate in the last round but picked up a point at Arsenal in their last league game to put an end to a streak of 4 defeats. With 7 points between them and safety, a defeat can’t be an option for Fulham.

Everton vs Aston Villa
Everton and Aston Villa started the season on a high.
As things have settled with just a handful of games left, they’ve both dropped out of title contention and are barely in the run to qualify for any other competition through the league.
Everton will open a 10-point lead on Aston Villa with a home win.

Newcastle vs Arsenal
Newcastle has done enough in recent weeks to help them avoid the drop. They host Arsenal after grabbing a point at Anfield against Liverpool.
Arsenal were 3-0 victors in the reverse fixture; and after losing a 1-0 home defeat at home to Everton in the last round, bouncing back with a win at Newcastle will be ideal.

Manchester United vs Liverpool
An English classic. The most successful English teams meet for the last time in the season.

Manchester United is 4 points clear in second place, while Liverpool is 4 points out of the ‘top 4’.
Liverpool will need this victory to help them close in on Champions League qualification from the Premier League.
It was a goalless draw between the two in the reverse fixture but a 3-2 win for Manchester United in their most recent meeting (Round 4 of the FA Cup).

Southampton vs Leicester City
Leicester City will try and go for a third successive win in the league to keep their grip on Champions League qualification.

Five more rounds to go of the Serie A season, and Inter Milan are 11 points clear in the lead while 3rd to 5th are separated by goal difference.

Napoli, Juventus, and AC Milan are tied on 66 points.
Napoli and AC Milan will be playing at home, while Juventus will be away to Udinese.

Napoli vs Cagliari
4-1 win for Napoli in the reverse fixture so the expectation at home will be another win.
Napoli needs to complete a league double on Cagliari to keep their grip on Champions League qualification.
Cagliari has found wins from their recent three games to help their fight to escape relegation.

AC Milan vs Benevento
Just like their city rival, AC Milan will be facing a relegation-threatened team when they host Benevento. After a humiliating defeat in Rome to Lazio, there is no other good response for AC Milan than a convincing win at home against Benevento.

Sassuolo vs Atalanta
Atalanta just climbed to second place in the standing after the last round of matches.
With three teams directly on their heels, Atalanta must grab a win against Sassuolo to keep their position in the standings at the end of the round.

Udinese vs Juventus
The reverse fixture was a 4-1 win for Juventus, and recent meetings between the two sides have gone to Juventus.
This is good news for a Juventus side that requires the maximum points.

Five more rounds left of the season (for most clubs) and we know the four teams that are going to represent the league in next season’s UEFA Champions League.
It is still up in the air what order they will be sitting at the end of the season.

The top three teams will enter Round 34 without a win from their most recent league game.
Real Madrid dropping points in a goalless draw with Real Betis.
Atletico Madrid was beaten by Athletic Club.
Barcelona was beaten at home by Granada.

Valencia vs Barcelona
Not many would have thought that Granada was going to come out of Camp Nou with a victory against Barcelona, but that is exactly what happened. Granada came from a goal down to win 2-1 at the Camp Nou.
Despite taking a 1-0 lead into the break, Barcelona threw out their opportunity to go to the top of the standings when they conceded 2 goals against Granada in the second half without a response.
Barcelona’s next task is at Valencia against a Valencia team that held them to a 2-2 draw in the reverse fixture.

Elche vs Atletico Madrid
Atletico Madrid will have the opportunity to make up for their defeat in the last round with a victory against relegation-threatened Elche. The reverse fixture was also a win (3-1) for Atletico Madrid, so they can be optimistic about the outcome.

Valencia vs Real Madrid
Real Madrid’s last two matches have ended in a draw. One in the league and the other in the Champions League.
They host an Osasuna side that held them to a goalless draw in the reverse fixture. Until a 2-1 defeat in the last round, Osasuna had gone on a 3-game win streak.
And while Osasuna’s ambition for the season can allow them to take the hit that comes from not winning this game, Real Madrid does not have that luxury.

Sevilla vs Athletic Club
The final match of the round will involve Sevilla.
Sevilla will know exactly what the impact of a win will be for them when they host Athletic Club.
The reverse fixture was a 2-1 defeat for Sevilla, so they will be looking for a win to amend that result and to keep their title-winning hopes alive.