La Liga – Round 19
No matches in hand – All the teams have played their scheduled fixtures.

The Spanish La Liga kicks off with Round 19 of the season after taking a pause for the holiday season.

Barcelona just gained a 2 point lead after the 18th round after many weeks with equal points as Real Madrid.

Real Madrid has suffered just a single defeat in the league all season, and have conceded just a goal more than their city rival Atletico Madrid.

Atletico Madrid conceded the fewest (11) but could work on scoring more (20), 15th best in the league.

Most Goals scored – Barcelona (47) – that is 14 goals more than the closest team Real Madrid (33)
Lionel Messi has scored 13 of those goals for FC Barcelona to be the current top scorer in the league.

There is no surprise that bottom table Espanyol has conceded the most (34) and scored the fewest (12). And most defeats (12) 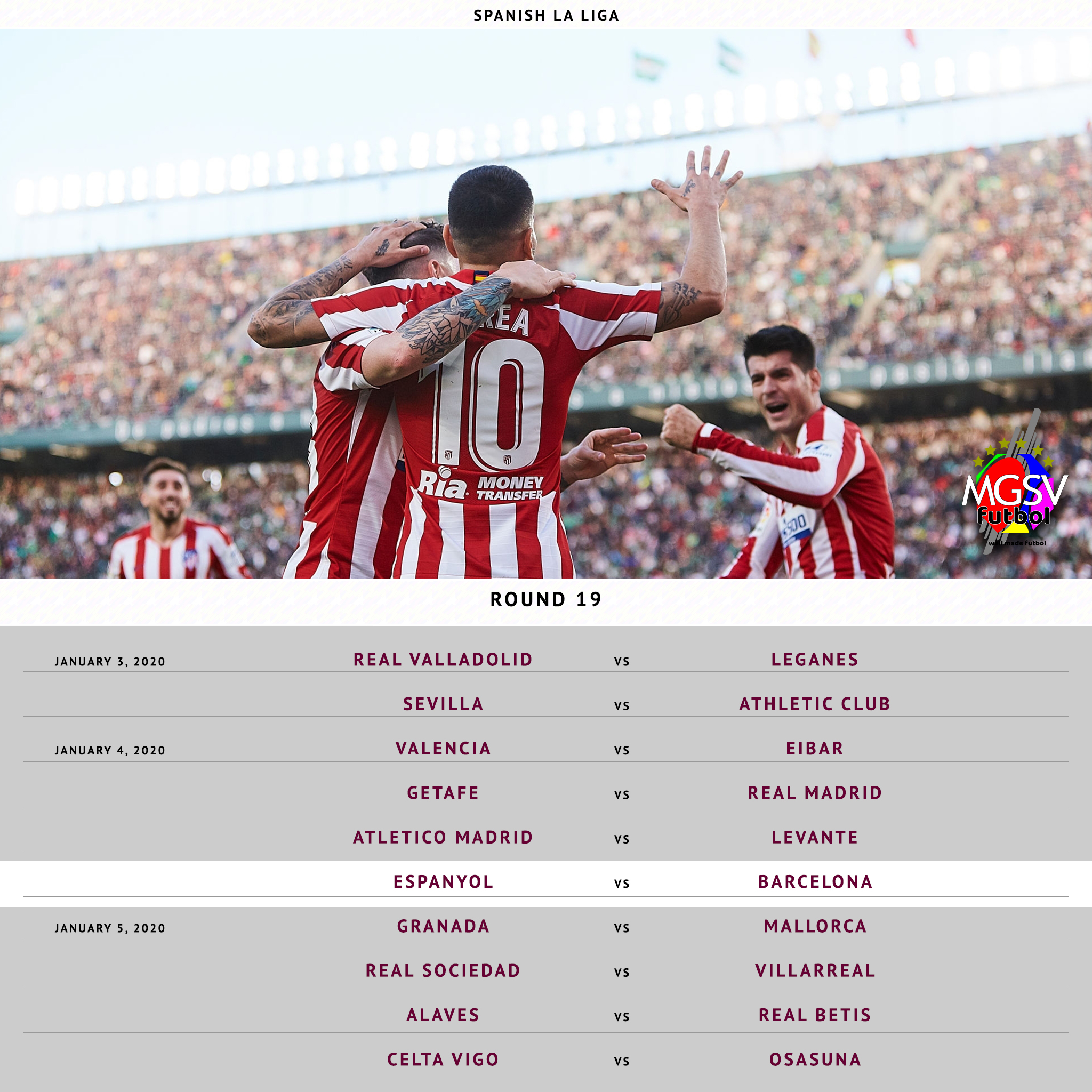 Leganes will help themselves he if they can grab a win at Real Valladolid.
Valladolid isn’t far from the relegation-zone, and this should be a match they can use to springboard their way out of relegation threat. “

Third-place Sevilla is a win away from equaling points with 2nd-place Real Madrid (if Madrid is beaten in this round). Winning at home against an Athletic Club side that is 4 points away would be a test for Sevilla.

Valencia will be expected to seal a win at home against Eibar.

As part of the top 6 teams in the league, and the 6 teams that have 30+ points, Getafe would be a tricky match for a Real Madrid team that will be looking to bounce back from a draw in the last round with a win in this fixture.
Madrid will need the right result to at the very least keep the point margin between them and Barcelona from widening.

Atletico Madrid will be looking for consistency and potency in front of goal in the second half of the season if they are to throw their hats into the race for the title.
A win against 9th-place Levante should force Atletico Madrid back into being a title contestant this season.

Barcelona needs a win the Catalan Derby to keep their lead in the title race.
Barcelona away record hasn’t been ideal, but as the team on top of the league, beating the team at the bottom end of the table should be an expectation.

Recently promoted Granada and Mallorca go at each other for three points that are more vital to Mallorca at his point than to Granada.
The task is made harder for Mallorca by playing away from home.

Real Sociedad will be expected to seal three points when Villarreal comes to visit.
The best a win here will do for Real Sociedad is carrying them to third-place in the league.

15th-place Alaves and 13th-place Real Betis go at it in this round.

Reletagtion-zoned Celta Vigo will help their battle for survival in the top flight with a win against Osasuna.