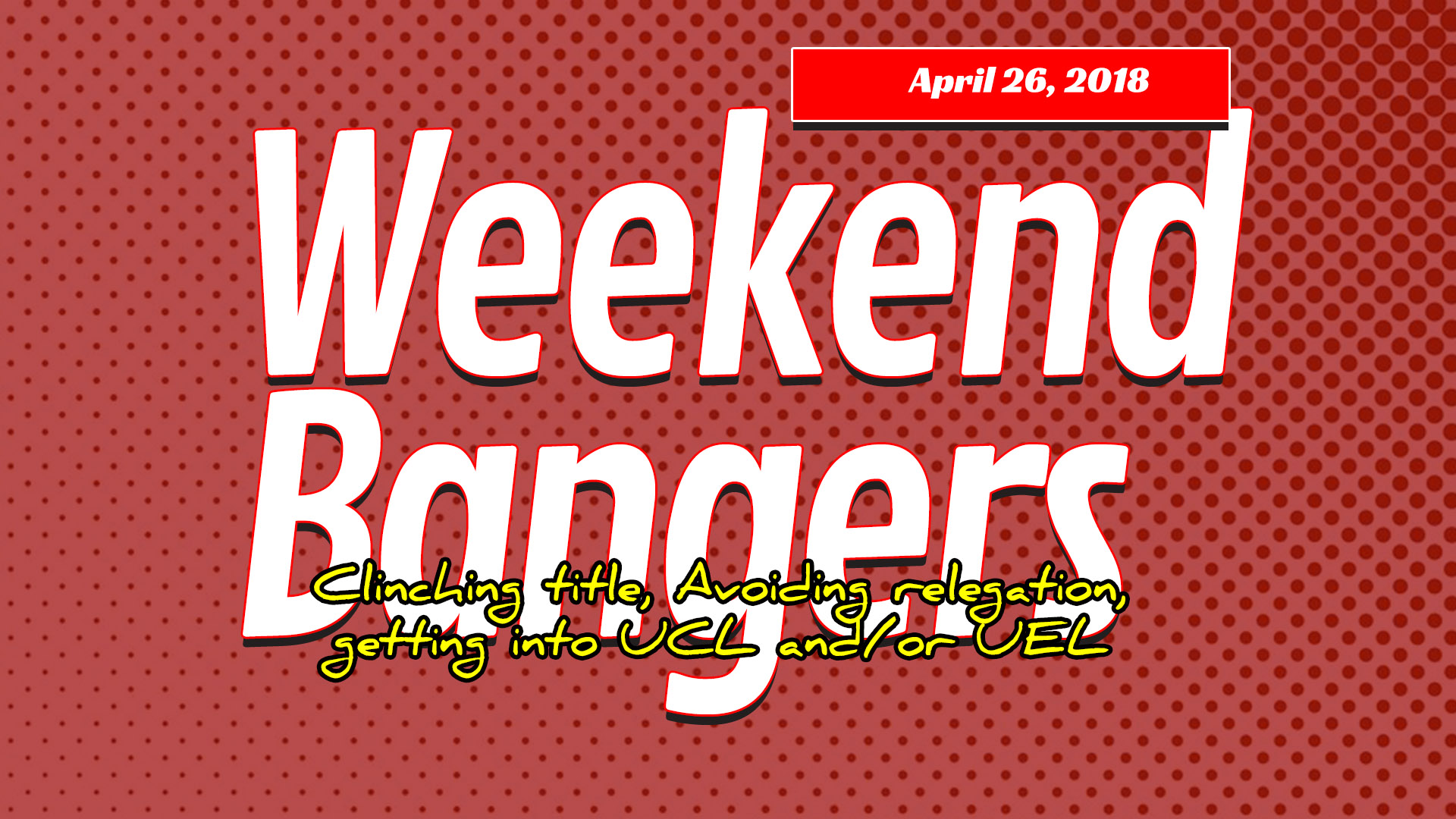 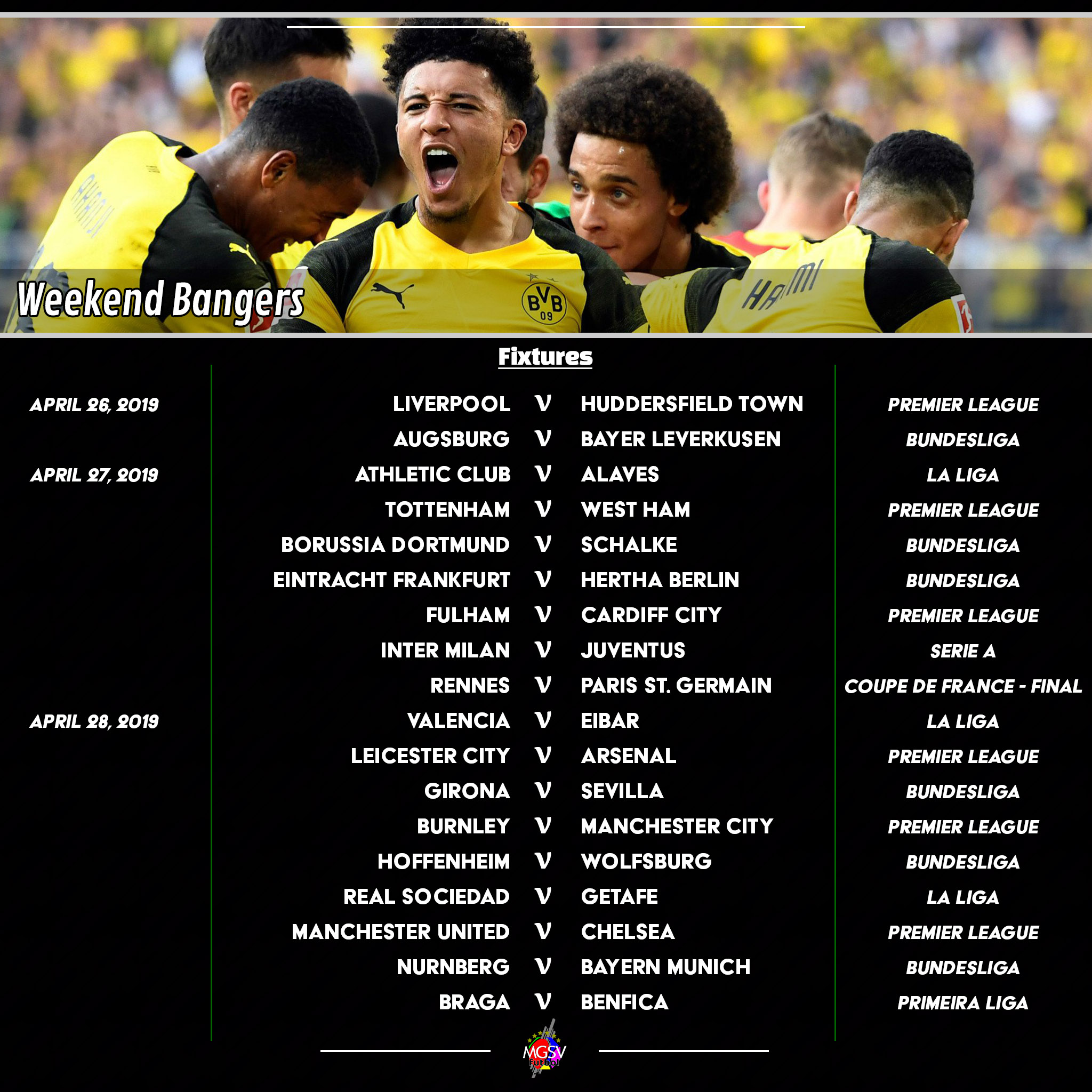 Three matches left to wrap up the 2018/19 Premier League season and only a point separate the top two teams. Manchester City took a 2-0 win in the Manchester Derby to take top spot in the league.

Tottenham, Chelsea, Arsenal, and Manchester United have three matches left to get one of the two spots left in the league to be a part of the Champions League.

Manchester United has scored 2 and conceded 11 goals in their last 5 matches. – Both goals scored were from penalties. 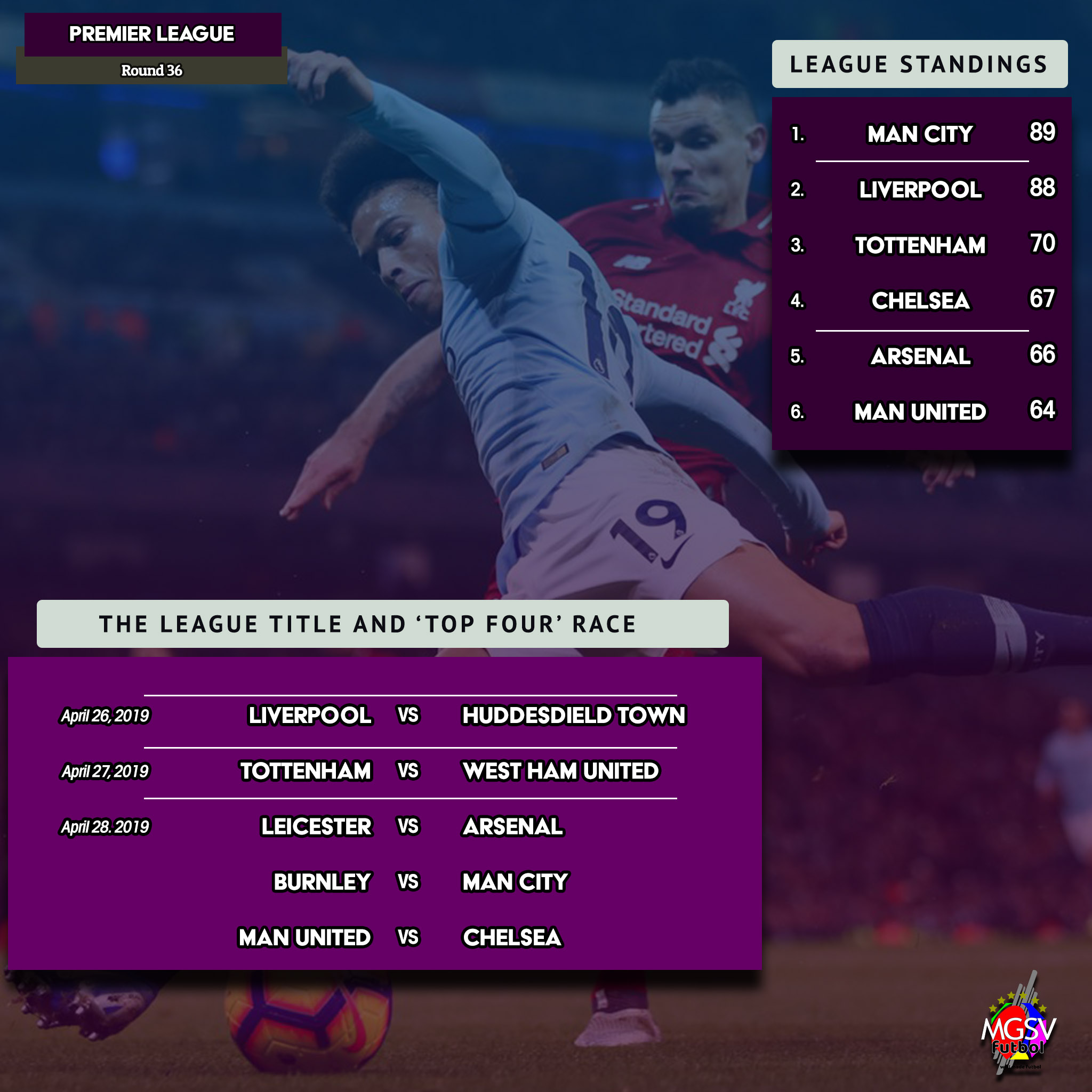 This Weekend fixtures for the top six teams
April 26, 2019
Liverpool vs Huddersfield Town

Tottenham 8-0 Other Teams
Tottenham have won all four of their home games in all competitions since moving into their stadium, scoring eight goals and conceding none

Tottenham is unbeaten in their new home stadium.
4 matches, 4 victories, 8 goals scored and none conceded.

Next up …
Tottenham vs West Ham.

Relegated Fulham could play a role in Cardiff City’s future in the Premier League. Fulham will be in search for their 3rd successive league victory when they welcome Cardiff. There is nothing to lose for the home side and everything to gain for the away team.

Brighton host a Newcastle side that is also looking for their 3rd win in a row. Brighton can’t afford defeat when Cardiff City is just a win away from equaling the points accumulated.

Shane Long might have broken the record for the fastest goal scored in the Premier League, but it wasn’t enough for Southampton to pick up the maximum points from their midweek fixtures against Watford. Southampton will be looking to get comfortable by trying to get a win at home against a Bournemouth team that is coming from defeat to relegated Fulham. against

April 27, 2019
Fulham vs Cardiff
Southampton vs Bournemouth
Brighton vs Newcastle 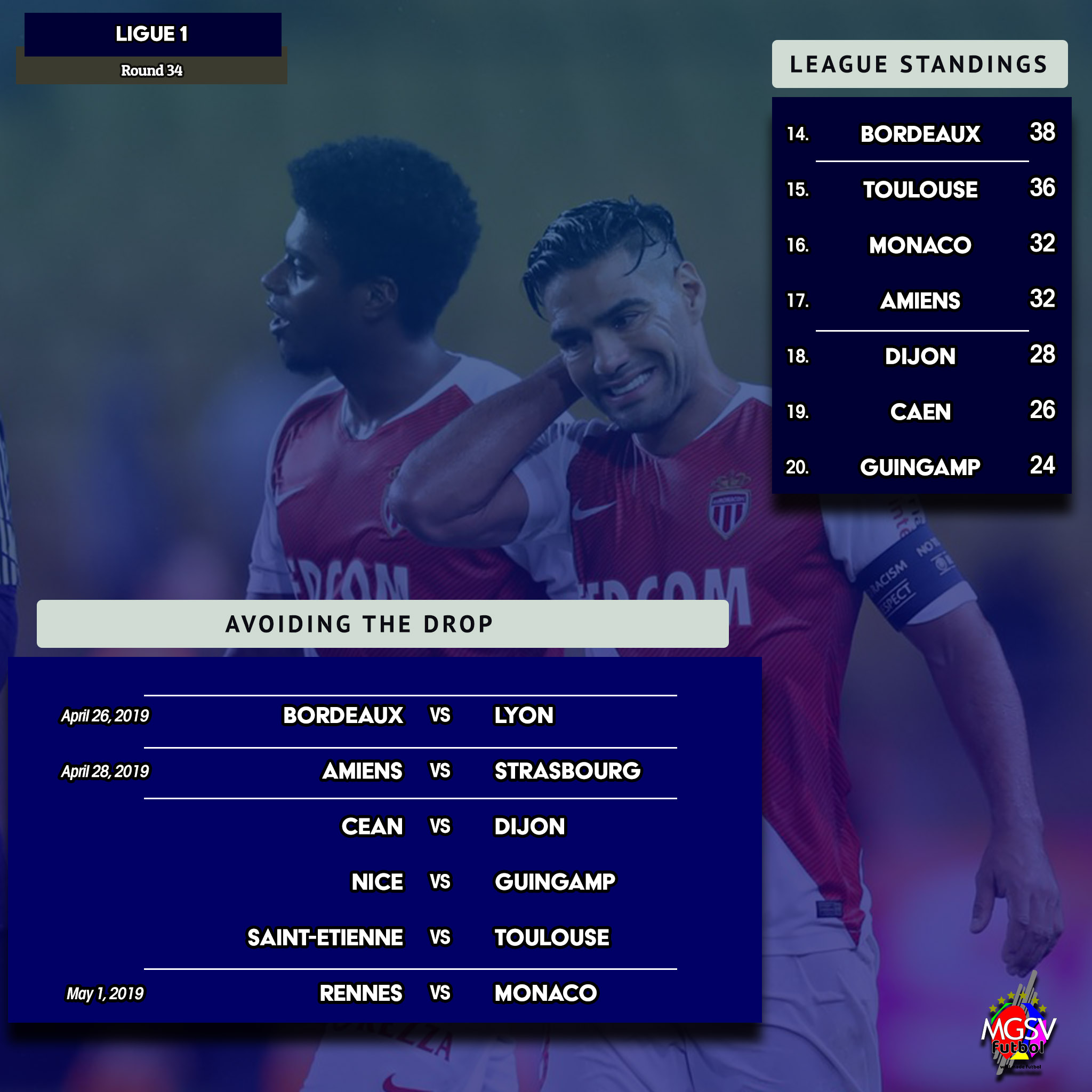 April 28, 2019
Amiens vs Strasbourg
Caen vs Dijon
Nice vs Guingamp
Saint-Etienne vs Toulouse

Weekend Fixture for the chasing pack
April 26, 2019
Bordeaux vs Lyon

April 28, 2019
Lille vs Nimes
Saint-Etienne vs Toulouse
Marseille vs Nantes

Serie A
The Champions League football
Napoli has a comfortable lead amongst the teams that are in the contest for the final three tickets for direct qualification. 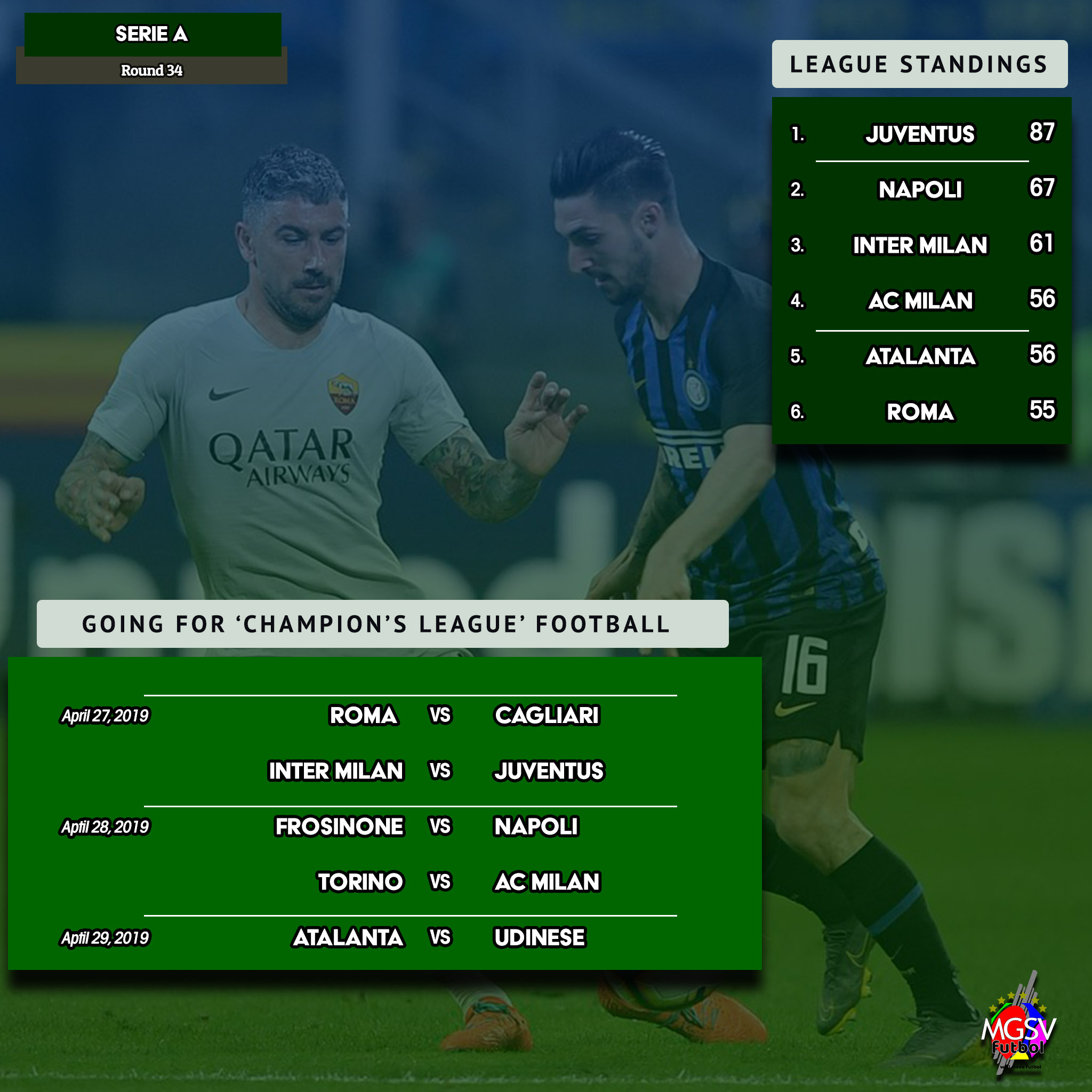 Bundesliga
Will the league title go to Dortmund or stay in Munich?

The weekend fixtures for the chasing pack
April 26, 2019
Augsburg vs Bayer Leverkusen

Relegation Battles
The best Hannover can do is a relegation-playoff spot.

La Liga
A home victory against Levante guarantees that Barcelona will be La Liga champions. 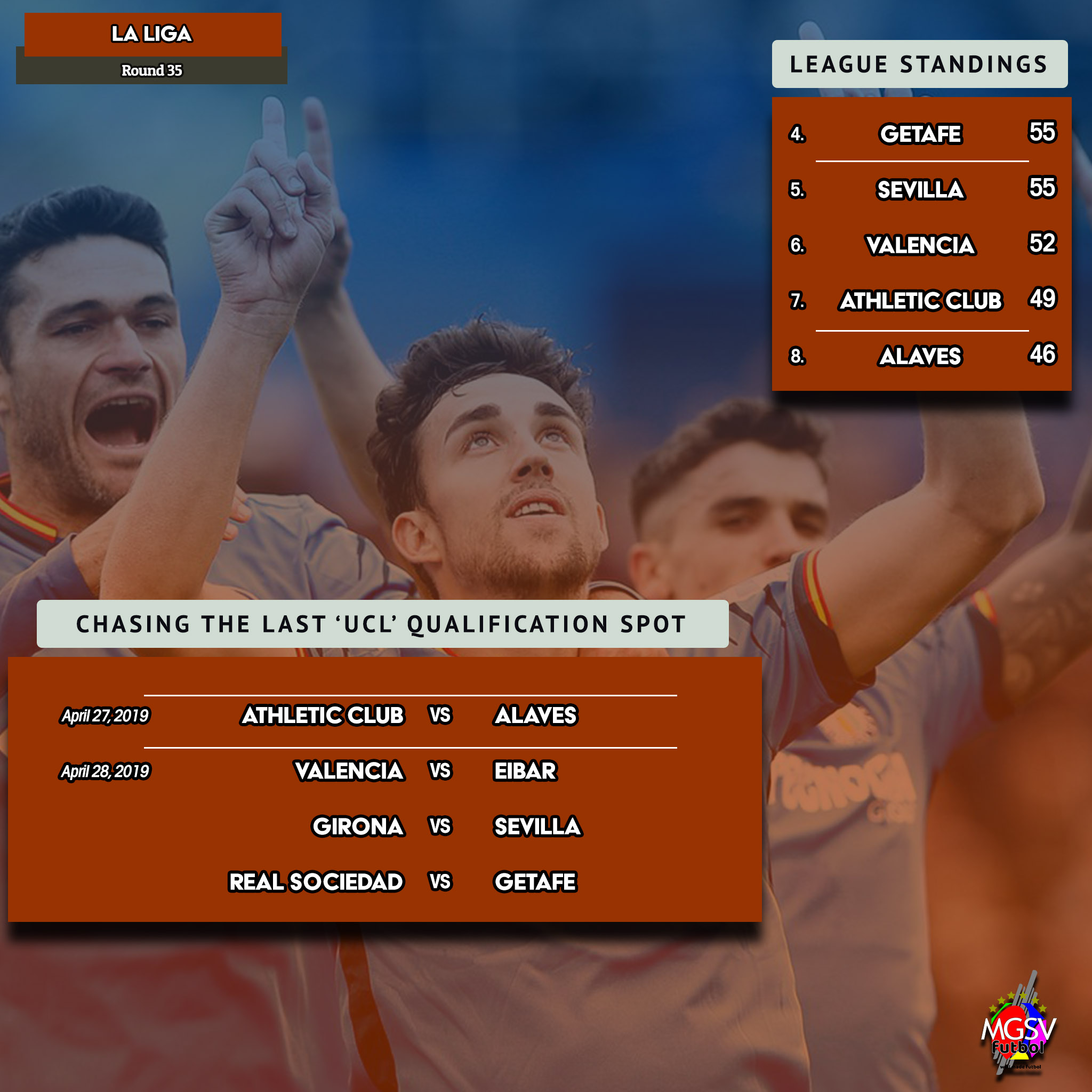 The weekend fixtures for the teams in the hunt for the final UCL spot
April 27, 2019
Athletic Club vs Alaves

Paris St. Germain is looking for their 5th straight Coupe de France title when they take on Rennes on Saturday.