As Bundesliga enters the holiday break,
Bayern Munich are back on top of the German Bundesliga.
Bayer Leverkusen and RB Leipzig are tied on points and 4 points clear of Wolfsburg.
Wolfsburg used a narrow win against Stuttgart to replace Dortmund in the ‘top 4’.
Dortmund fell from 4th to 5th after a disappointing defeat in the opening match of the round.
Union Berlin kept 6th place but narrowed the gap in points between themselves and ‘top 5’ to a single point.

Defeat against Frankfurt kicked Augburg out of the top 10.

Arminia Beilfeld moved up to the relegation-playoff spot in the standings after handing Schalke another defeat.
Schalke is stuck at the bottom of the table with no wins. 4 points from a possible 39.

Robert Lewandowski (Bayern Munich) is clear off the rest in the goalscoring list with 17 goals; 7 more than his closest challenger in the golden boot race in the league. 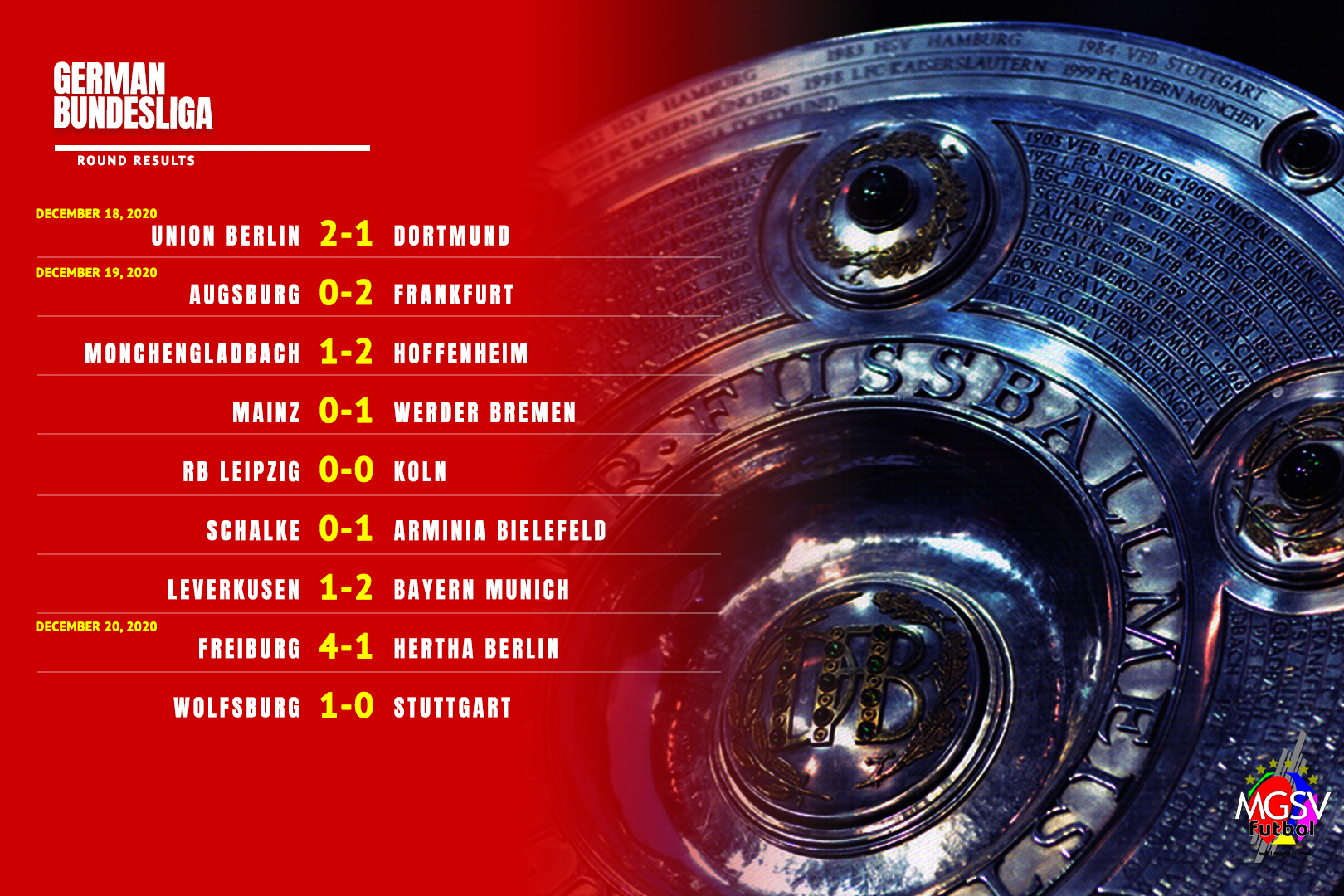 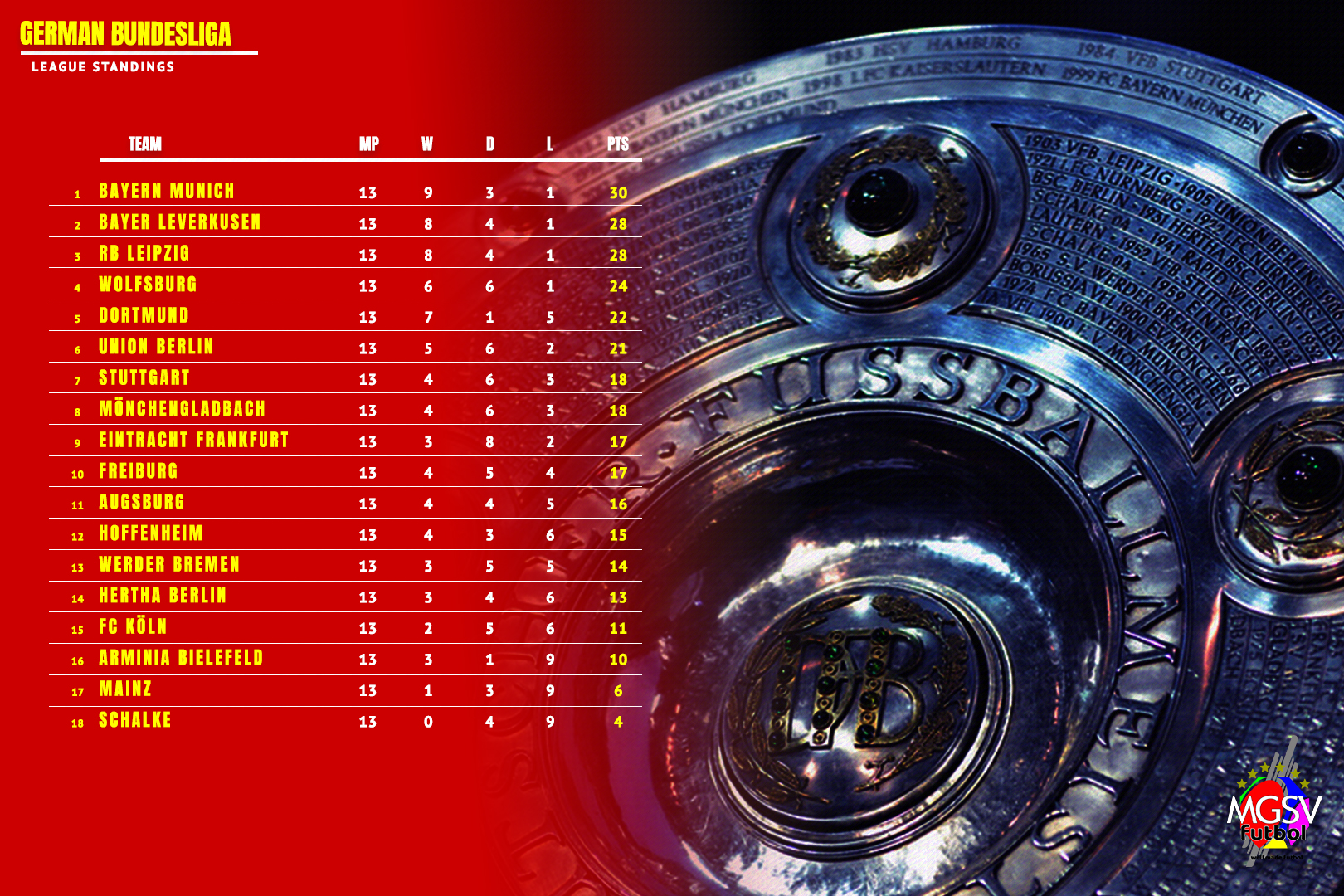 Dortmund’s last two visits to Union Berlin have ended in defeat. Another defeat in Berlin meant Dortmund have won a single game in their last 5 Bundesliga matches. Union Berlin won their first league game in 5 matches after a 2-1 win against Dortmund. Youssoufa Moukoko became the youngest goalscorer in the Bundesliga when he got Dortmund back on level terms at 1-1.

Frankfurt lept a point above Augsburg after a 2-0 win against them.

Ryan Sessegnon scored the winner as Monchengladbach dropped points at home after blowing their lead in the final quarter of the match. They finished the match at a numerical disadvantage (Marcus Thuram sent off in the 79th-minute) and suffered a 2-1 defeat to Hoffenheim.

Werder Bremen ends the year with a win. A ‘1-0’ win at Mainz was Werder Bremen’s first win in 10 matches. The result also extends Mainz’s winless run to 5 games.

In a game where 3 points were needed to take advantage of the results from the ‘Leverkusen vs Bayern’ fixture, RB Leipzig were held goalless at home by FC Koln.

Schalke are 29 straight league games without a win in the Bundesliga. A ‘1-0’ defeat at home to recently promoted Arminia Bielefeld meant that Schalke has to wait till next year to end their losing streak.

The defending champions claimed top spot in the league after beating the league leaders. Robert Lewandowski scored two goals to get Bayern Munich from a goal down to a goal up and a win at Leverkusen. Bayern goes into the new year at the top of the Bundesliga table.

Three wins on the bounce for Freiburg after going 9 straight without a league win. Freiburg picked up three points from a 4-1 win against a Hertha Berlin side that has been without a win since the Berlin Derby.

Wolfsburg grind out a 1-0 win at home against Stuttgart in the final match of the round to finish in 4th place.