The opening and closing games of the round were goalless draws.

The leading two teams added three points to their tally.
Wolfsburg falling at Hoffenheim has increased the gap between the top two teams and the rest of the league by +3.

RB Leipzig did the necessary to put pressure on Bayern Munich with a win at Freiburg, but Bayern Munich showed why they are defending champions by coming from behind to win in Der Klassiker.

Frankfurt couldn’t get the win at home to take advantage of Wolfsburg’s defeat.
The occupants of the ‘top 4’ remained in the positions.

Der Klassiker defeat dropped Dortmund a potion down to 6th, and allowed Leverkusen to take the 5th place with their win against Monchengladbach.

Monchengladbach dropped a position down to 10th, while Stuttgart moved up to take their pace.

Monchengladbach is the only change in positional standings from 10th to the bottom of the league standings.

Schalke gained a point at the bottom but their existence in the top flight is just mathematical. 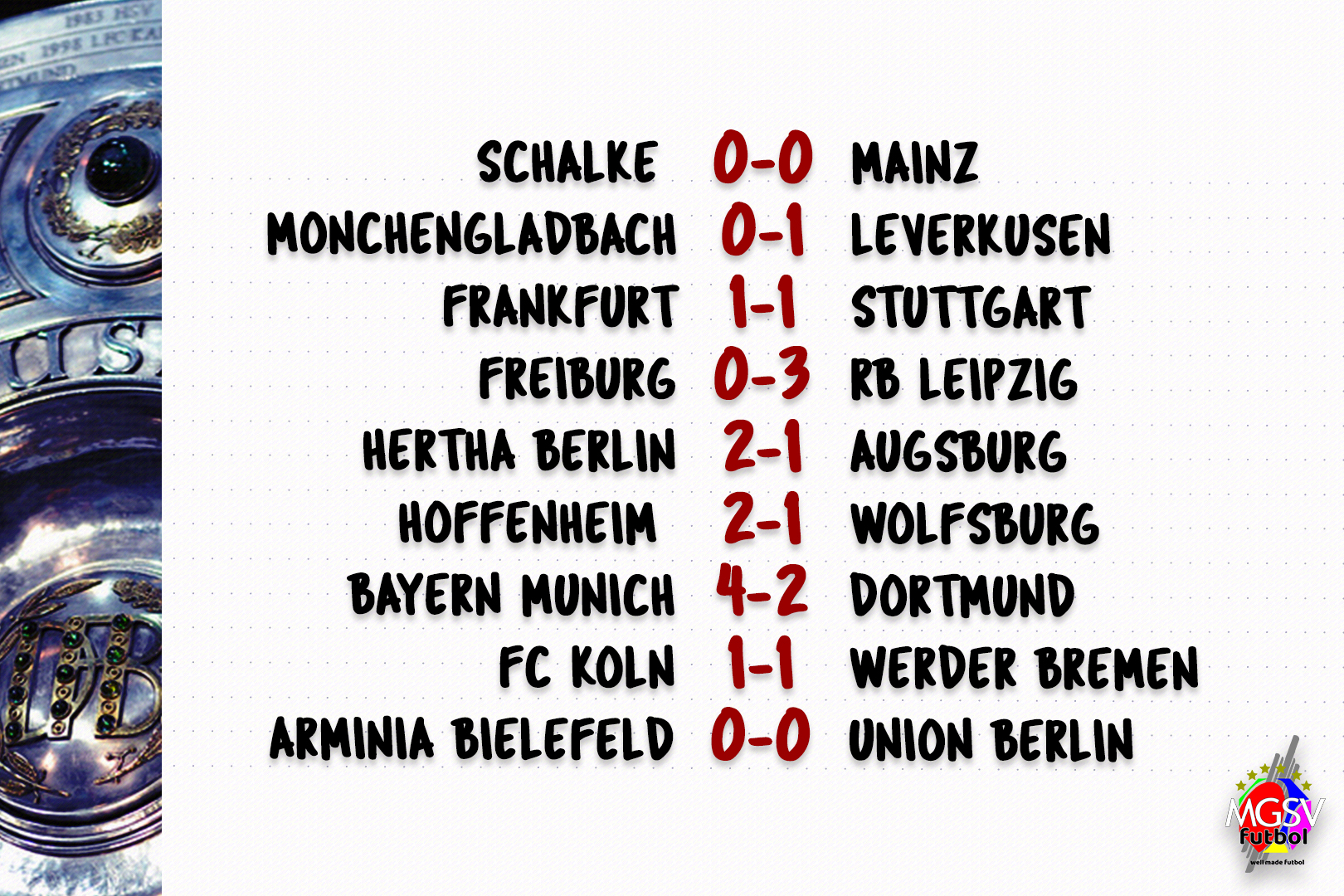 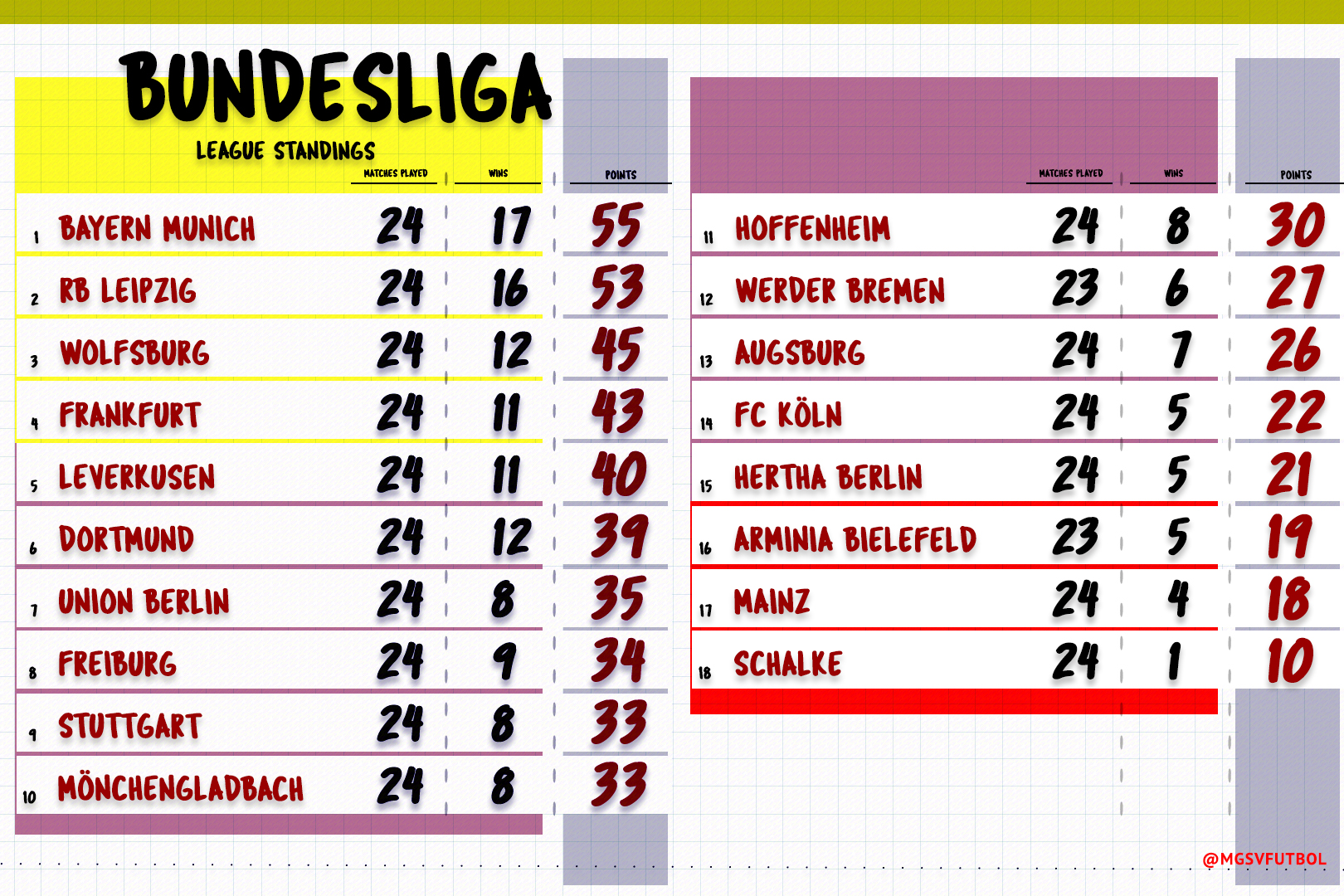 The bright side for Schalke is that they touched double digit in points. But a team picking up an average of 0.24 points per game is surely not going to escape relegation.

(4 L 2 D). Six straight matches without a win for Monchengladbach after a 1-0 defeat at home to Leverkusen. The result was also the first win in four league games for Leverkusen.

Stuttgar’s lead barely lasted for a minute. Sasa Kalajdzic scored in the 68th minute for Stuttgart, Filip Kostic got Frankfurt back on level after his goal in the 69th minute. Frankfurt were looking for a victory at home to quickly get back to winning ways after their 5-game win streak was snapped last round at Werder Bremen.

Christopher Nkunku assisted the insurance goal and scored the winning goal of the match for RB Leipzig to pick up 3 points from Freiburg with a 3-0 win.

Hertha berlin narrows the gap to 5 points between themselves and Augnurg in a match that can be included in the relegation-avoidance battles in the season. A lead in the opening 2 minutes could not prevent Augsburg from a defeat in Berlin. Dodi Lukebakio converted from the penalty spot in the 89th minute to see Hertha Berlin come from a goal down to secure a 2-1 win at home. It was the first win in 10 league matches for Hertha Berlin. Their last win had come from bottom tabled Schalke.

It hasn’t been a great week for Wolfsburg; they suffered their first league defeat in 9 matches after a goalless second half at Hoffenheim. This result comes after getting knocked out of the DFB Pokal in the middle of the week. Wout Weghorst was on the score sheet to get Wolfsburg on level terms after going down a goal in the 8th minute, but Andrej Kramaric restored the lead for Hoffenhiem to take a 2-1 lead into the break.

A hat-trick for Lewandowski and a brace from Haaland.
It is okay for your score predictions to be wrong, but not predicting goals from those two is borderline criminal at this point.
Bayern won their fifth successive Der Klassiker to maintain their lead in the title race.
Bayern Munich took their eye off the prize in the opening 10 minutes and were punished by Erling Haaland.
Haaland scored 2 goals in the opening 10 minutes of the game to hand Dortmund a lead that was eventually lost when Robert Lewandowski and Bayern Munich woke up from their slumber.

Jonas Hector scored an 83rd minute equalizing goal for FC Koln to put an end to three defeats in a row with a draw at home to Werder Bremen.