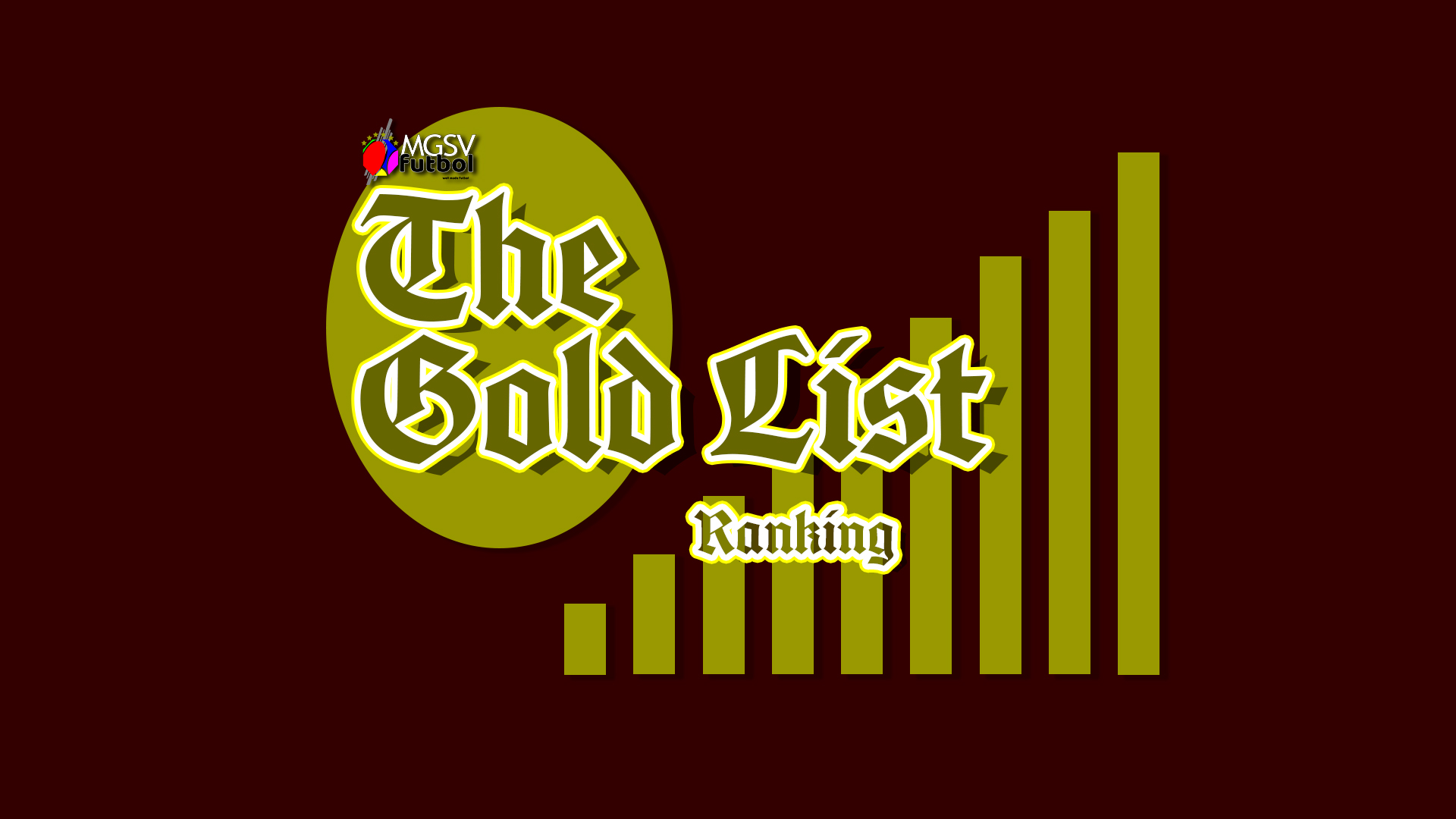 Europe’s most ‘in form’ team.

A great start to the new season has given the likes of Everton, Rennes, Aston Villa, Lille, and Lens to climb to heights that many wouldn’t expect them to be.

While many heavyweights are still finding their form, the ‘challengers’ are making the right moves to get an early lead for the 2020/21 season.

The first release of the 2020/21 season Gold List form sheet has an Italian Serie A club at the top and at the bottom.

Atalanta are top of the pile; accumulating 86.33 points, while Udinese is piled on from gaining no points. As things stand, Atalanta are the best team in Europe.

Their PPG and GPG matched the maximum points allowed from a match. With 4 wins out of 4 in the Premier League, it’s fair to say that Everton‘s new signings are having an immediate impact.
30+ more matches on this form should do the trick for Everton. Can you imagine the league title staying in Liverpool but with the Blue side of town?

Having a perfect start and being at the top end of the table was supposed to be the shock from Aston Villa until they topped that by thrashing the defending champions.
Aston Villa went into the international break by picking up a third successive league win from a 7-2 hammering of Liverpool. The score did a lot to their league statistics. 3.67 GPG; scoring 11 and conceding just 2. They narrowly escaped relegation last season. It won’t be the first time in recent history that a team that narrowly escaped relegation went on to lift up the title in the Premier League.

For Manchester City, this has not been the best start of the season for a team that was expected to get their league title back.

Fulham are struggling to meet the standards to play in the top flight.
They’ve conceded 11 and scored 3. They’ve lost every match in the Premier League this season conceded at a rate of 2.75 GPG.

Leeds United seems to be matching the standards of the top flight.
We expected them to be the best performing sided from the promoted three teams. So far, Leeds United are doing the expected. They haven’t had a shocking victory, but a 4-3 defeat to the defending champs and a 1-1 draw against last season runner-up are not bad results to have.

They are slipping away. Saint-Etienne went from three straight wins to 3 straight winless. Saint-Etienne are currently on a streak of 3 winless games (that includes 2 defeats) in Ligue 1. Undoing their success in the opening three rounds of the season.

They’ve managed a victory and a loss, and the rest of their season has been draws. Lyon are finding it difficult to get victories since opening their season with a win.
They’ve gained 7 points so far in the Ligue 1 at a rate of 1.17 PPG; the same rate as their GPG.  They’re conceded less than a goal per game (0.83) but Lyon will need to increase their scoring on the other end of the pitch if they want to be contending in a continental competition in the coming season.

Rennes have scored the most goals in Europe’s T-5 domestic leagues. (granted they’ve done so with more matches played).
Just like Lyon in Ligue 1, Rennes’s GPG and PPG are identical (2.33). But unlike Lyon, Rennes are unbeaten and have won the majority of their league matches ( 4 wins from 6). They scored 14 goals and conceded 7.

Scoring fewer goals is why Lille isn’t at the top of the league table. They are matching Rennes in all applicable categories but in the goal department. Lille might be scoring fewer goals than Rennes 14 to 9; but they have had the better defense of the two by conceding two goals in their 6 matches played.

Atalanta – 4.3 goals per match. (equal to Bayern Munich. followed by Napoli with 4 goals per game. Unbeaten in Serie A (3win out of 3), while outscoring everyone in the league. As long as they stay firing in the goals, they will have an excellent shot of keeping their place at the top of the league standings in Italy.

6 points from 9. Newly-promoted Benevento have picked up the points from the teams that they can. If they continue in this fashion, they should secure safety in the Serie A. Yes, they were hammered 5-2 at home by Inter Milan, but that was Inter.

Schalke are still in a bad form. Their from the end of last season has leaked into the beginning of this season.

Life without Kai Havertz and Kevin Volland?
The bright side to their season is that they are unbeaten. Leverkusen are struggling to get wins in the early rounds of the Bundesliga season. Life after losing your biggest/promising star(s) isn’t looking good for Bayer Leverkusen at this point. They’ve managed to avoid defeat in the Bundesliga but have also managed to avoid victories. 3 draws in three games isn’t what Bayer Leverkusen would have been targeting at the start of the season.

It has been an ‘okay’ performance for Arminia Beilefeld since promotion. They have experienced a win, a draw, and a defeat in their opening three games of the German Bundesliga. Will they extend their stay in the top flight by the end of the season?

Cadiz have won two of their opening 5 matches; and both were away from home.
Early signs from newly-promoted Cadiz indicates that they are a team that will likely extend their stat in the top flight of Spanish football.

Real Madrid are on top of the La Liga standings after winning 3 of their 4 matches, scoring 6 and conceding 2. Can they keep their form and defend the league title?

Barcelona have two games in hand remains unbeaten. They dropped two points in their recent fixture but have kept it tight in the back by conceeding a goal in their opening three matches while scoring 8 on the other end.

2.25 PPG. Their heavy defeat against Aston Villa wiped out their goal difference. Liverpool have 3 wins from 4 matches in the title defense season in the Premier League. Scoring at a rate of 2.75 goals a game, and statistically condeeding at the same rate.

Just like Liverpool in their title defense year, Bayern Munich suffered a shock 4-1 defeat against Hoffenheim. Bayern has kicked off their season with 2 wins from 3 matches, averaging 4.3 GPG (t-Highest in Europe’s top 5 leagues). They are defending champions in all competitions they will be playing in Europe this year. How many titles will Bayern be able to keep in their grip?

Kicking off their season with 2 defeats was far from expected, but Paris St. Germain have gone on to win every Ligue 1 match since. Four consecutive wins have brought Paris St. Germain into the top 4 in the current standings; and 2 points off the top of the table.

A home win and an away draw is how Juventus have kicked off the season in the Italian Serie A.

100% records – Of the 98, only five teams have won every match available to them in the league. Two from the English Premier League (Everton and Aston Villa), and three from the Italian Serie A (Atlanta, Milan, Napoli)

The list gets a little longer when it comes to the teams that are still unbeaten in the league. Not all unbeaten records are helping teams to gain points.

From the 98, only 19 teams are still unbeaten.
6 teams from the Italian Serie A. 2 teams from the English Premier League (the same teams who have a perfect record), 2 teams from Ligue 1. 4 from the Spanish La Liga, and 5 from the German Bundesliga.

The struggling teams – There are 34 of the 98 teams that couldn’t accumulate enough to reach a point.

Udinese could not accumulate any points but they were not far from many other teams at the bottom end of the ranking.

Crotone (Italian Serie A) comes in as the lowest ranked of the promoted sides in 95th.

Leeds United (Premier League) is the highest ranked of the newly-promoted sides at 32nd.
Right below Leeds United is Benevento (Italian Serie A) in 33rd.

Huesca (Spanish La Liga) gets in 83rd. Fulham (English Premier League are in the final 10 at 91st.