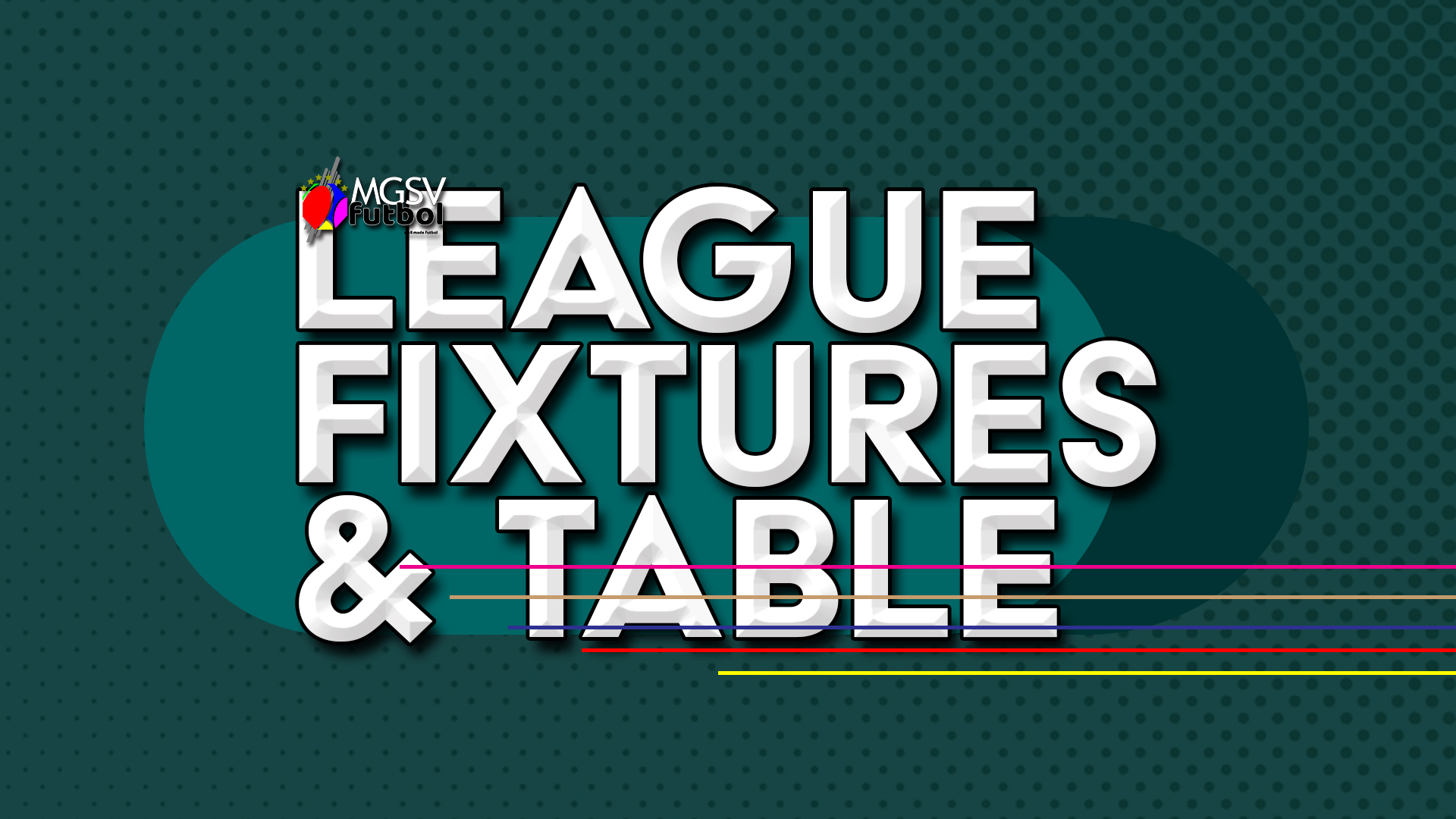 Paris St. Germain has a 100% winning start to their season and is the only team with that record. Their pre-season competition has failed to pick up a victory from the first three games of the season. 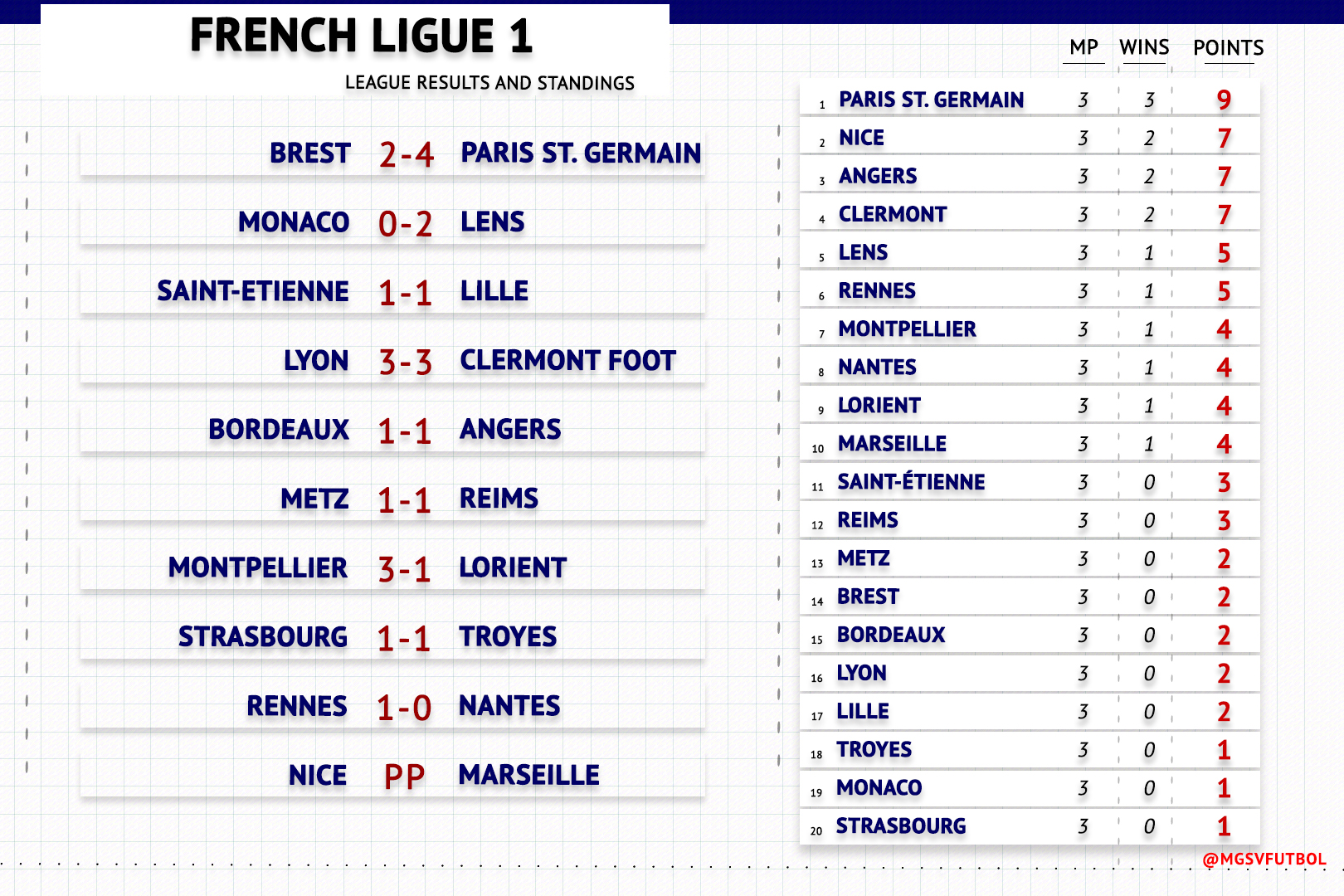 Lille, Lyon, and Monaco are all in the bottom quarter of the current standings after a winless start to their season. Dimitri Payet [Marseille] and Mohamed Bayo [Clermont Foot] lead the goal scoring list with three goals each.

Marseille and Nice have a game in hand.

With Angers and Clermont dropping points in their fixtures, Paris St. Germain is alone at the top of the Ligue 1 league table.
Troyes and Strasbourg playing out a 1-1 draw meant that all the 20 teams in the league have picked up at least a point in the first three matches.

Brest 2- 4 Paris St. Germain
Paris St. Germain made it three wins out of three while handing Brest their third defeat in three matches. Both halves ended in a 2- 1 victory for the visitors, with six different goal scorers on the night. Paris St. Germain opening the round with a win to set the pace for the chasing pack [the preseason contenders]

Monaco 0-2 Lens
Monaco remained without a league victory after a 2-0 defeat at home to Lens. Monaco’s best result so far has been the 1-1 draw with Nantes on opening day. For Lens, this was their first win of the season after draws in their opening two matches.

Saint-Etienne 1-1 Lille
The two teams must find their first win of the season in their next match. Saidou Sow scored an 85th-minute equalizing goal for Saint-Etienne to avoid their first defeat while denying
Lille of a win.
Lille’s title defense has started winless in their first three games; with a heavy defeat against a Nice team that is being managed by their former manager.

Lyon 3- 3 Clermont Foot
When Lucas Paqueta scored right before the halfway mark to add to Moussa Dembele’s brace, many would’ve thought Lyon was on track to their first win of the season. Newly-promoted Clermont Foot overcame a 3-1 first-half defeat to seal a point from a 3-3 draw. The result kept Clermont Foot from a defeat in their first three matches:

2 wins and a draw. Lyon has sandwiched a defeat into two draws.

Bordeaux 1-1 Angers
The points were shared between Bordeaux and Angers after both teams grabbed a goal each in the first half.

Metz 1- 1 Reims
Metz and Reims are both without a win after sharing the points through early goals, and leaving the field with a player fewer after both sides got a player sent off in the 87th minute.

Montpellier 3- 1 Lorient
Montpellier recovered from a goal down through three second-half goals for their first win of the season. Lorient ended the match down two goals and reduced by two players to two late red cards.

1-0 Marseille [abandoned] with about 15 minutes left.
The match was abandoned after fans threw projectiles onto the pitch before invading it and having a dash with the players.

Wolfsburg is the new league leaders in the title race while Hertha Berlin is the only side without a point after two rounds played. 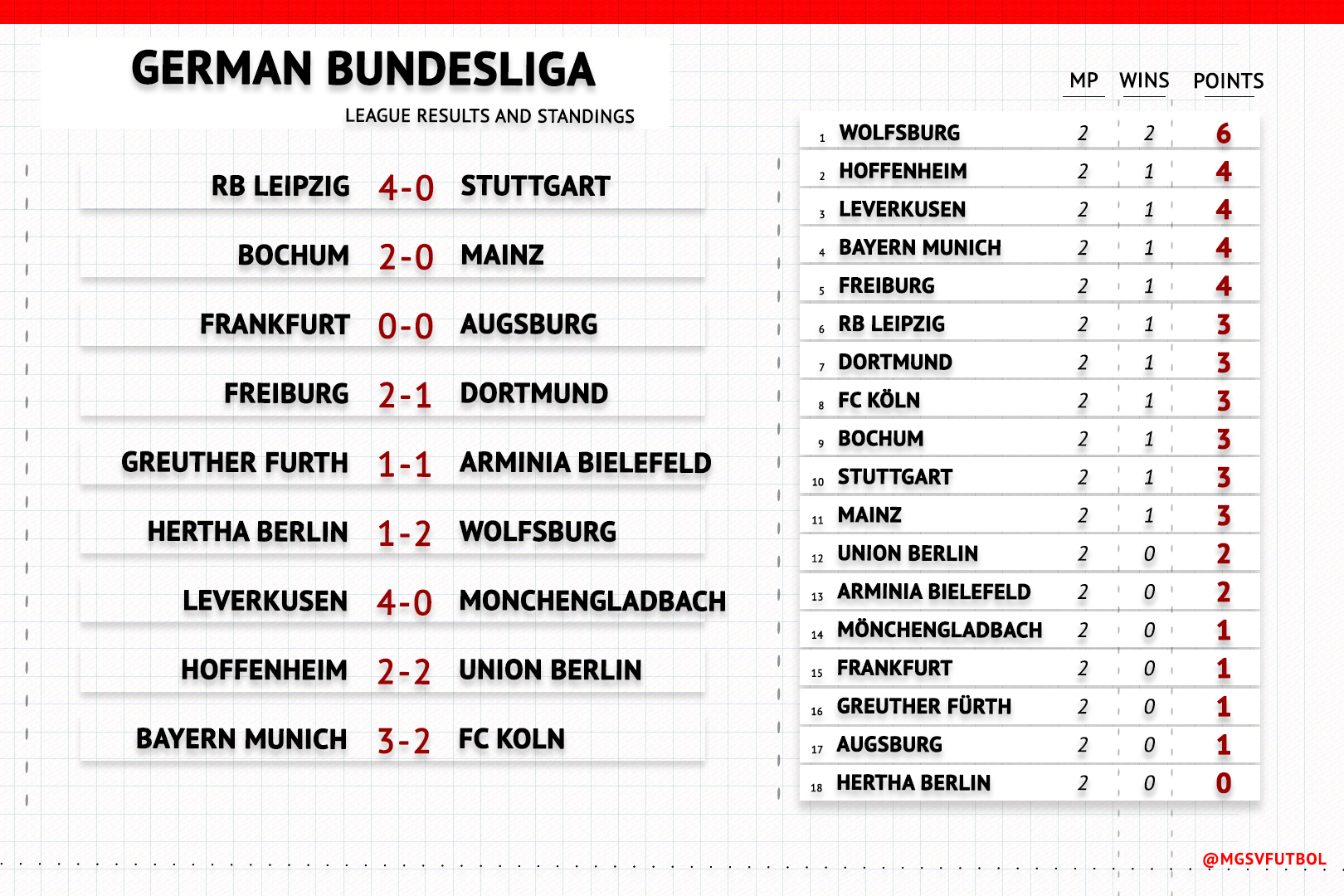 Wolfsburg is at the top of the Bundesliga standings after being the only team in the league with a 100% winning start after two rounds of the 34 played. The chasing pack behind Wolfsburg consists of four teams on 4 points each. Hoffenheim, Leverkusen, Bayern, and Freiburg.

There are 10 players at the top of the scoring list with two goals each. There is no surprise that Robert Lewandowski is part of the ten.

RB Leipzig 4- 0 Stuttgart
Dominik Szoboszlai scored two of the four goals that RB Leipzig used to get their first win of the new season. Leipzig needed to make up for a losing start at Mainz, while Stuttgart was hoping to add to their 5- 1 victory against newly promoted Greuther Furth.

Freiburg 2-1 Dortmund
Dortmund followed up their defeat in the German Super Cup with another in the German Bundesliga. A 2- 1 defeat against a Freiburg side that kicked off their season with a goalless draw against Arminia Bielefeld was the best Dortmund could do after a 5-2 win against Frankfurt in the opening round.

Hertha Berlin 1- 2 Wolfsburg
Wolfsburg recovered from a goal down on the hour mark to secure three points from a 2- I win in Berlin.
Lukas Nmecha scored the late-winning goal in the 88th minute.

Bayern Munich 3-2 Fc KoIn
Bayern Munich picked up their first victory of the season through a narrow victory over FC Koln.
Serge Gnabry’s second goal of the match was needed for Bayern Munich to avoid dropping another set of points.

At the end of the opening round, the defending champions are at the top of the pile. Inter Milan are leading the title race with equal points as eight other teams.
Eight winners made eight losers, leaving four teams who shared the points. 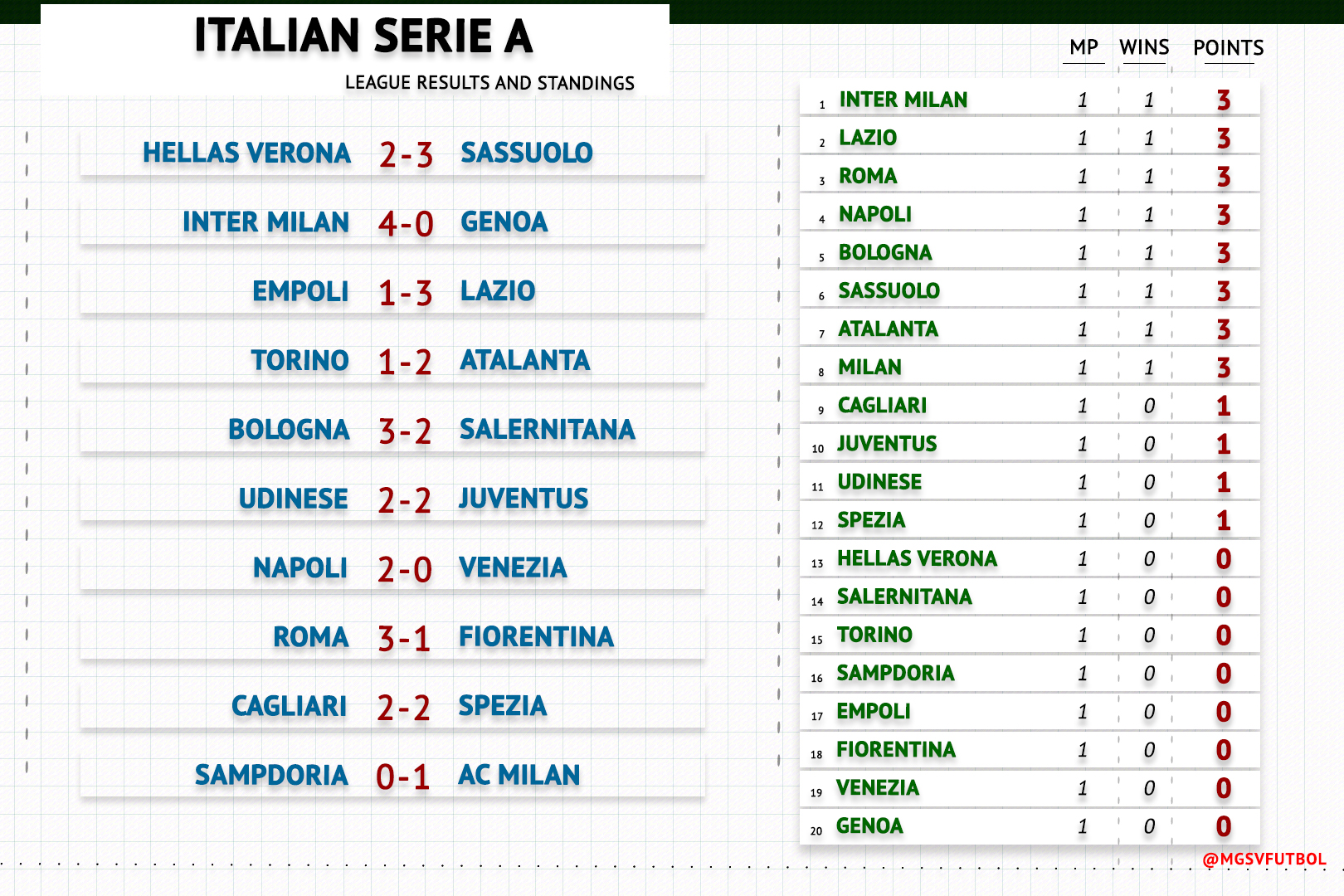 Inter Milan 4-0 Genoa
Title defence got off to the best start for Inter Milan. They were two goals up before the opening 15 minutes and doubled their lead around the final 15 minutes of the regulation time.
Inter Milan’s new signings Hakan Calhanoglu and Edin Dzeko were both on the score sheet for scoring and assisting.

Empoli 1-3 Lazio
The match was decided in the first half. Sergej Milinkovic Savic quickly got Lazio on level terms in the 6th minute when he scored the equalizing goal to cancel the lead Filippo Bandinelli had given Empoli in the 4th minute. Manel Lazzari got the winning goal for Lazio in the 31st minute, before Ciro Immobile insured the victory by converting a penalty into a goal in the 41st minute.

Torino 1-2 Atalanta
Andrea Belotti thought he had gotten a point for Torino when he got his side even on the scoreboard with a goal in the 79th minute. Roberto Piccoli restored Atalanta’s lead and sealed their victory when he scored the final goal of the match in 90+3′.

Bologna 3-2 Salernitana
Lorenzo De Silvestri got Bologna on even terms on two occasions before Marko Arnautovic scored the deciding goal to get Bologna a narrow victory at home against newly-promoted Salernitana.

Udinese 2-2 Juventus
A V.A.R offside call denied Cristiano Ronaldo from scoring a game-winning goal in the additionalminutes. You’d think that the game had been decided when Juventus went two goals up before the 25th minute. Udinese recovered two goals in the second half to pick up a point at home against Juventus.

Napoli 2-0 Venezia
It was not a great start but Napoli ended with a win against newly-promoted Venezia. Napoli was reduced to 10 men after Victor Osimhen got sent off on a red card in the 23rd minute.
Lorenzo Insigne needed two penalties in the second half to open the scoring. In signe missed a penalty in the 57th minute and converted another in the 62nd. Eljif El mas added his goal to seal the victory in the 73rd minute.

Roma 3-1 Fiorentina
Jordan Veretout restored Roma’s lead with two goals after Nikola Milenkovic scored on the hour mark to give Fiorentina an equalizing goal. Fiorentina were a player down after Bartlomiej Dragonski was red-carded in the 17th minute. Roma lost that numerical advantage in the 52nd minute when Nicolo Zaniolo accumulated yellow cards to get his sending off.

Cagliari 2- 2 Spezia
Joao Pedro saved Cagliari from a home defeat in their opening game of the season. Pedro got Cagliari even on the scoreboard with two goals [60′ and 66′] to get Cagliari a draw against Spezia.

Sampdoria 0-1 AC Milan
Brahim Diaz’s goal in the 9th minute was good enough to get AC Milan a winning start to the season.

Sevilla and Atletico Madrid are the teams with a 100% winning record after two rounds. Real Madrid and Barcelona have already dropped points but have 36 rounds to amend that. 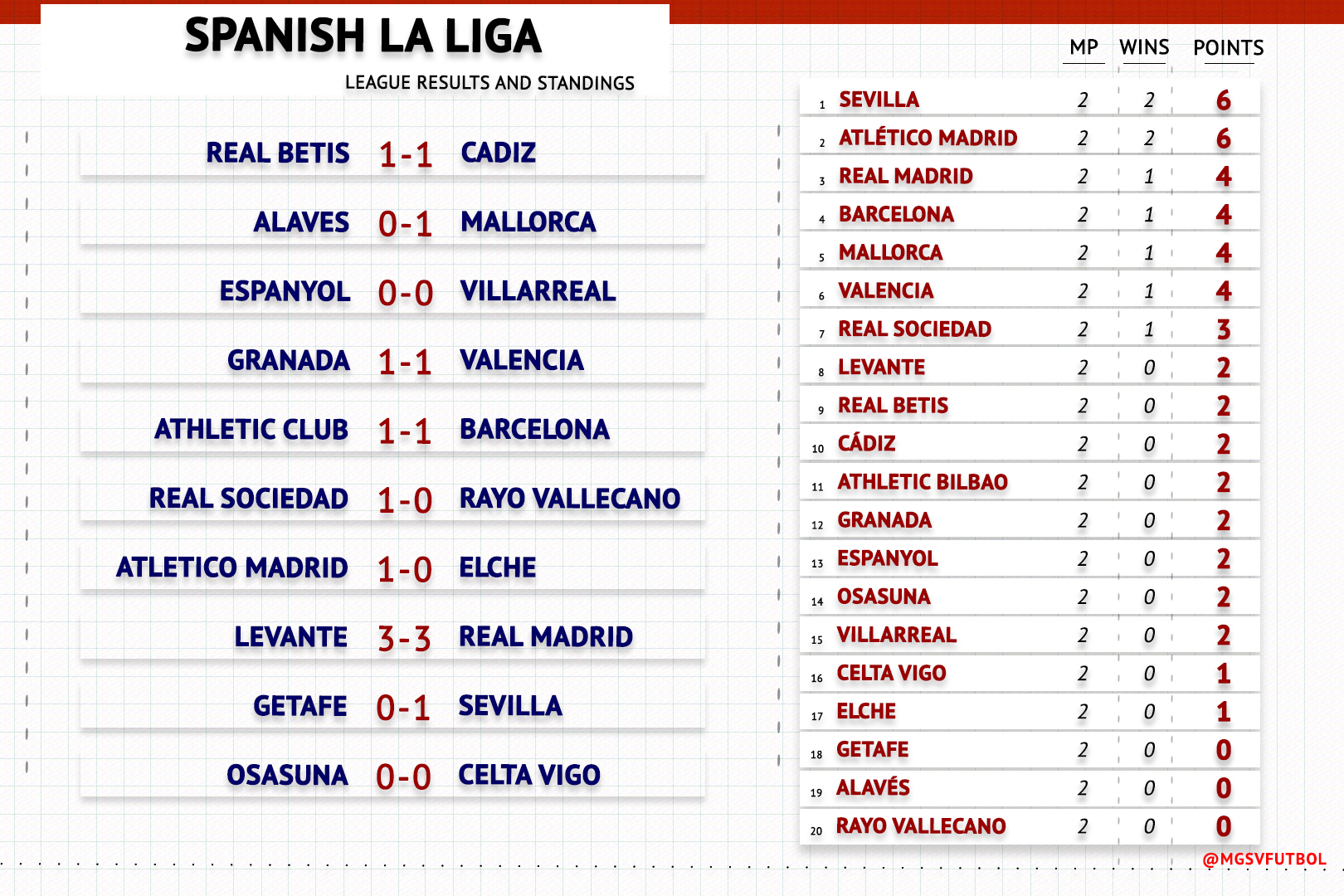 Athletic Club 1-1 Barcelona
Memphis Depoy scored to save Barcelona from a defeat against Athletic Club. Barcelona dropped their first set of points in their second match/first away fixture. For Athletic Club, its successive draws to start the new season.

Alaves 0-1 Mallorca
Newly-promoted Mallorca secured their first three points of the season, thanks to Fer Nino’s 80th minute goal. Despite playing both of their opening matches at home, Alaves have been on the losing end in both games. They moved from a 4- 1- defeat against Real Madrid to this defeat.

Getafe 0-1 Sevilla
Erik Lamela scored a late-winning goal to get Sevilla the three points to move to the top of the league table. Lamela’s goal allowed him to become one of the three leading goalscorers of the season.

Osasuna 0-0 Celta Vigo
Osasuna and Celta Vigo closed the round with a goalless draw. A back-to-back draw for Osasuna; and a bounce back from defeat for Celta Vigo.

PREMIER LEAGUE
West Ham is top of the league table with equal points as Chelsea, Liverpool, Brighton, and Tottenham.
Arsenal is in the relegation zone.

Bruno Fernandes [Manchester United] is joined by Michail Antonio [West Ham] at the top of the scoring chart with three goals each. 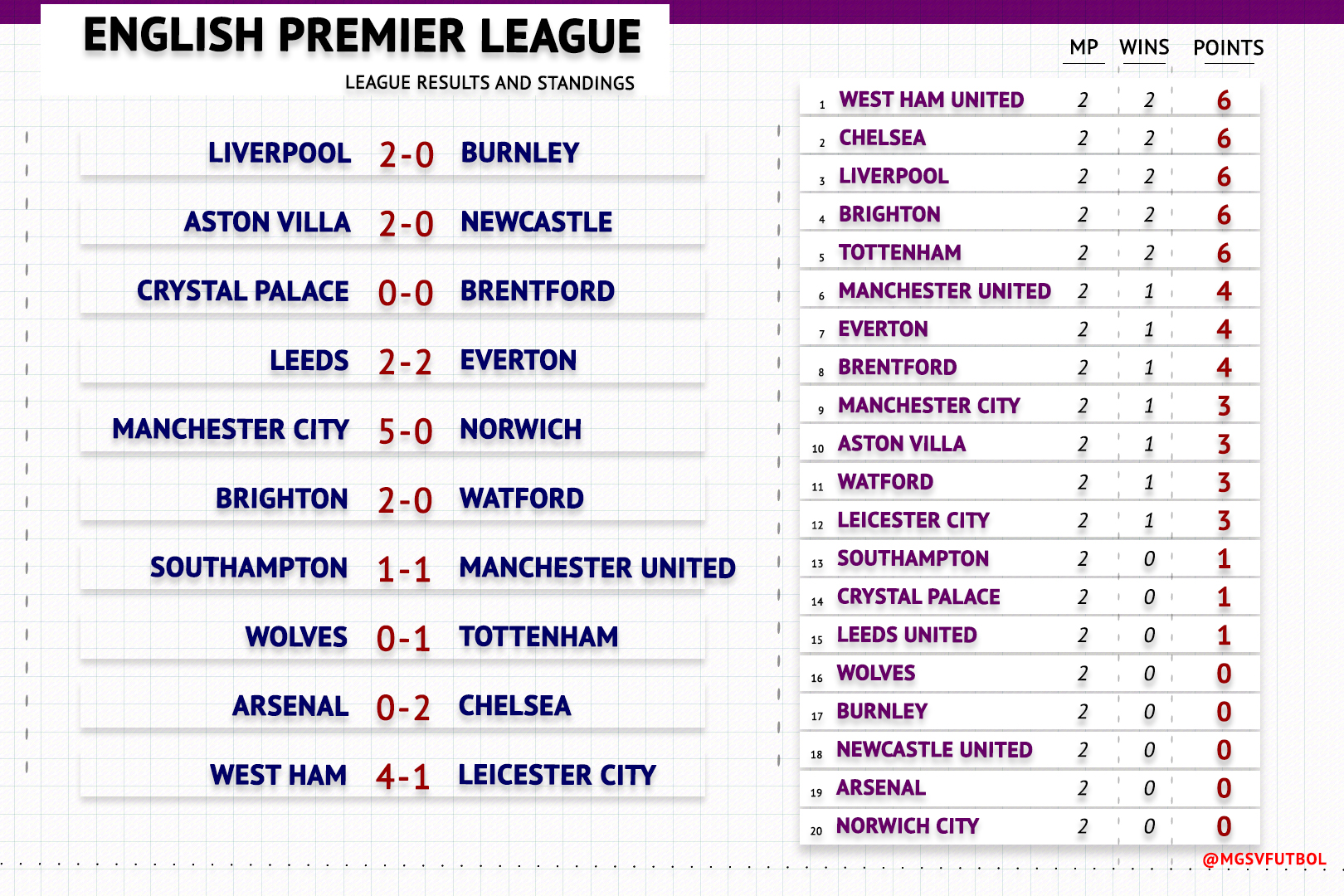 Liverpool 2- 0 Burnley
A dominating performance from Liverpool. Diogo Jota and Sadio Mane delivered the goals for Liverpool to open their home record for the season with a victory against Burnley.
Had it not been VAR catching an offside, Mohamed Salah would’ve joined the scoring list.

Manchester City 5- 0 Norwich
It could have been a 6- 0 win if VAR hadn’t ruled out what would’ve been Manchester City’s second goal of the game. Jack Grealish opened his goal account with Manchester City when he scored to double the lead in the 22nd minute.
Manchester City bounced back from opening day defeat with a 5- 0 thrashing of promoted Norwich City. Judging from their opening two games, Norwich City is going to have a hard time on their return to the Premier League. To be fair, Norwich City have had to start their
season against the two most recent winners of the league title.
Up next for Norwich in the league is Leicester City.

Leeds United 2-2 Everton
Leeds United came from a goal down on two occasions to pick up their first point of the season.

Wolves 0-1 Tottenham
Dele Alli’s penalty goal in the 9th minute gave Tottenham another 1-0 win to keep a 100% win start to the season. Alli’s goal allowed Nuno Espirito Santo to get a winning return to his former
team.

Arsenal 0-2 Chelsea
Arsenal has opened their season with successive 2-0 defeats.
It took Romelu Lukaku 15 minutes to score his first goal on his second debut match for Chelsea. Lukaku’s goal won Chelsea the London Derby against Arsenal at the Emirates Stadium.