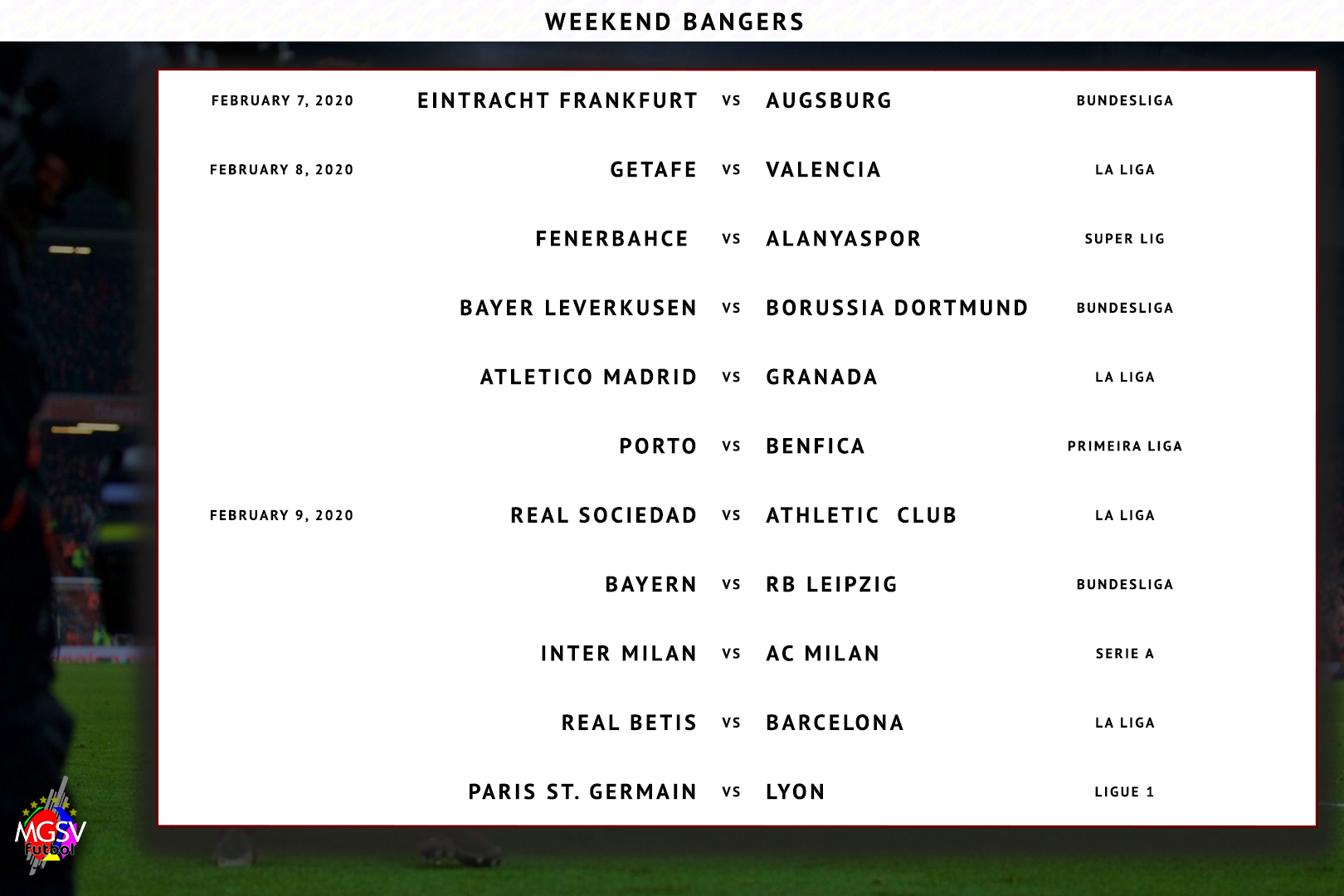 A battle in the middle of the current Bundesliga standings.
Augsburg has a point lead on Eintracht Frankfurt. A repeat of the first meeting will open a four point gap. Eintracht Frankfurt can return the favor by picking up a win that will see them leap over Augsburg in the standings.

February 8, 2020
Getafe vs Valencia (Spanish La Liga)
Reversed fixture – Valencia 3-3 Getafe – With 15 minutes left in the first half, Valencia scored three in 10 minutes to bounce back from going down a goal in the opening minute of the match. Getafe scored all the goals in the second half to seal a point on the road.

Chasing Champions League finish
Valencia needs the win to help their chances of finishing the round in the top four, while Getafe will be looking to close in on the top two with a win. Both teams are not safe in their position in the current league standings. A defeat could cost them their current position in the league.

Bayer Leverkusen vs Borussia Dortmund (German Bundesliga)
Reversed fixture – Borussia Dortmund 4-0 Bayer Leverkusen – Paco Alcacer opened the scoring, Marco Reus scored a brace, Raphael Guerreiro also found the net to make it a three goal lead. And as things stand, all three goalscorers for Dortmund in the first meeting won’t be making an appearance in this fixture. Alcacer is sold, while Reus and Guerreiro are injured.

Granada needs a win against an out-of-form Atletico Madrid side to cut the point-gap between the two teams in half. Any more poor results could see Atletico fall out of the top 6.

A Benfica win at Porto will see them widen their lead at the top to 10 points. Porto will need another league win against Benfica to stop them from running away with the league title.

Two teams that did the improbable by booking their way to the Copa del Rey semi final in the week. Real Sociedad will play host Athletic Club. The home side could widen their lead to 6 points or lose it.

Bayern vs RB Leipzig (German Bundesliga)
Reversed fixture – RB Leipzig 1-1 Bayern Munich – An Emil Forsberg penalty at the end of the first half canceled out Robert Lewandowski’s goal that had given Bayern Munich a lead in the 3rd-minute.

This is an opportunity to reclaim their place at the top of the Bundesliga table.
Despite going two consecutive league matches without a win and getting knocked out of the DFB-Pokal over the week, RB Leipzig’s week will be restored if they can manage a win away against Bayern Munich. A victory will get Leipzig back to the top of the table, while defeat will see Bayern Munich begin their run for another Bundesliga title.

Derby della Madonnina – For Inter Milan to keep up with Juventus and Lazio in the Serie A title race, they must beat their city rivals once agains.

Barcelona needs this win to keep tabs on Real Madrid.