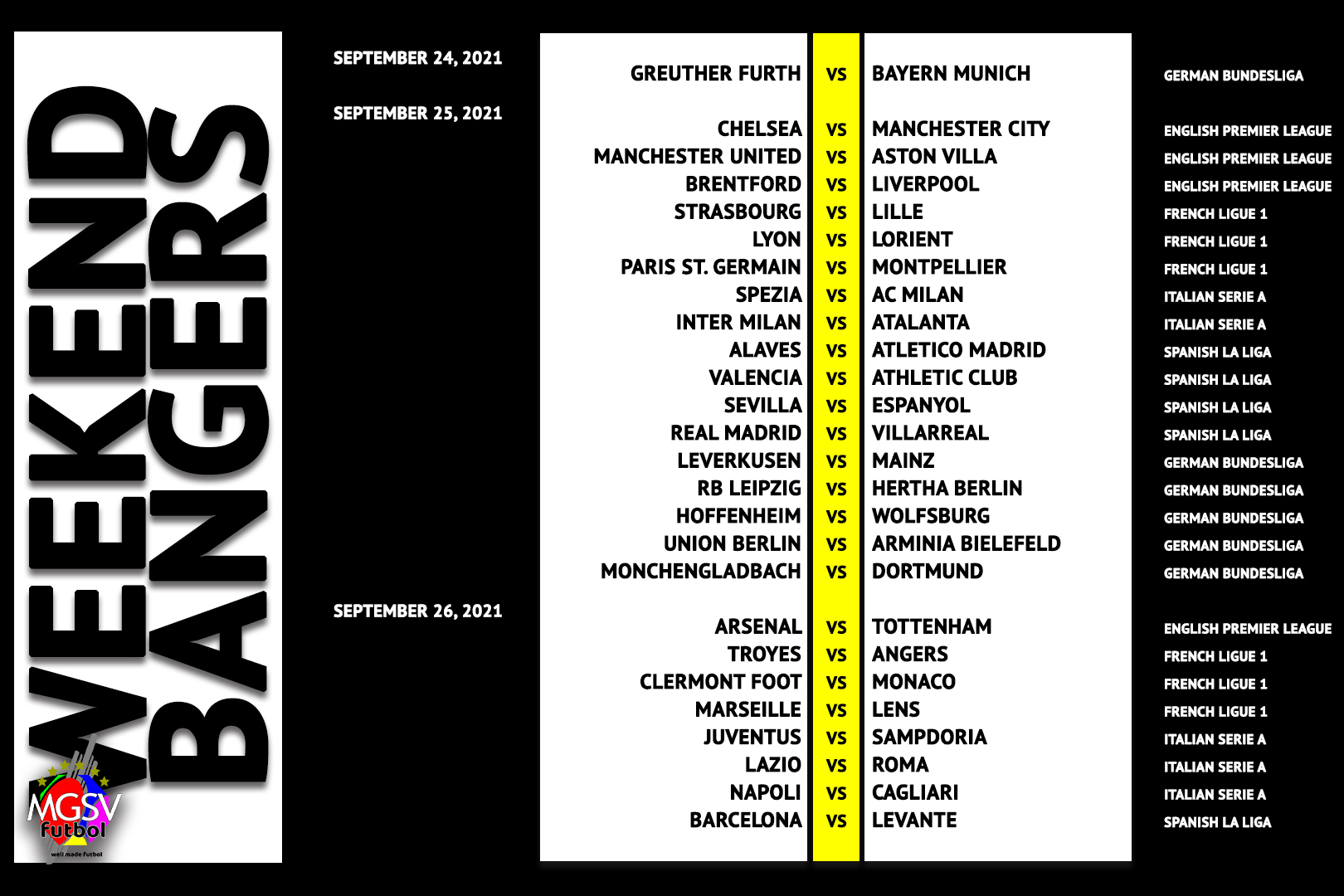 Chelsea, Liverpool, Manchester United lead the way in the English Premier League.
Bayer Munich and Wolfsburg lead the way in the German Bundesliga.
Paris St. Germain are clear at the top in French Ligue 1
Napoli and Real Madrid have a slight advantage in the Italian Serie A and Spanish La Liga respectively.

GREUTHER FURTH VS BAYERN MUNICH (GERMAN BUNDESLIGA)
After trashing newly-promoted Bochum 7-0 to take the top spot in the German Bundesliga, Bayern Munich is getting another chance at another newly-promoted team when they face Greuther Furth.

LEVERKUSEN VS MAINZ (GERMAN BUNDESLIGA)
Leverkusen is in the ‘top four of the Bundesliga standings after five games because of the goal difference they have against Mainz.

RB LEIPZIG VS HERTHA BERLIN (GERMAN BUNDESLIGA)
RB Leipzig has had a win in 5 matches. That is low for a team that finished second last season.

HOFFENHEIM VS WOLFSBURG (GERMAN BUNDESLIGA)
No team in the German Bundesliga has more points than Wolfsburg after 5 rounds of the new season. A victory at Hoffenheim will see to it that the statement stays true. Hoffenheim has had one victory so far, while Wolfsburg’s blemish in their record has been a draw with Frankfurt in the last round.
Will Wolfburg get back to their winning streak after dropping their first set of points in the league against Frankfurt in the last round?

MONCHENGLADBACH VS DORTMUND (GERMAN BUNDESLIGA)
Battle of the Borussia. Dortmund is a point from the top of the league, while Monchengladbach is three points from the bottom of the league.

CHELSEA VS MANCHESTER CITY (ENGLISH PREMIER LEAGUE)
Manchester City is three points behind a Chelsea side that is unbeaten since the start of the season. Chelsea needs the victory to guarantee they keep their position at the top of the standings, while Manchester City needs a victory for the points they’ve dropped early in their quest to defend the league title. Chelsea’s start and the venue for the game should be an advantage for them, while Manchester City’s experience in winning league titles in recent seasons should be their advantage. The last time these two met was in the UEFA Champions League final; which Chelsea won. A lot more questions will be asked of Manchester City if they don’t get a positive result from this fixture.

Playing at home against Aston Villa will be an opportunity for Manchester United to take advantage of the result from the “Chelsea vs Manchester City’ fixture. Liverpool will be expected to do the same against Brentford.

NORTH LONDON DERBY: ARSENAL VS TOTTENHAM (ENGLISH PREMIER LEAGUE)
The three-point advantage Tottenham has on Arsenal in the league standings will be wiped away if Tottenham suffers their third straight league defeat. Tottenham is coming to the North London derby after losing suffering 3-0 defeats in their last two Premier League matches, while Arsenal has picked up a narrow ‘1-0’ win from their last two league matches. Granted that Tottenham probably had a stronger opposition, the morale is building for Arsenal while Tottenham losing theirs after having a better start to the season. A victory at home for Arsenal will have them equal Tottenham in points. It will take a 4+ goal win margin for Arsenal to move above Tottenham in the standings. Tottenham can’t afford to make it a third successive league defeat, and they can’t afford it in a North London derby.

LYON VS LORIENT (FRENCH LIGUE 1)
Lyon is a point below Lorient after 7 rounds played by both teams. A win will let Lyon shoot two points above Lorient in the standings; something Lorient will do everything in their power to avoid.


PARIS ST. GERMAIN VS MONTPELLIER (FRENCH LIGUE 1)
They might not be playing according to the expectations on paper but Paris St. Germain can make it 8 wins from 8 at home against Montpellier.


TROYES VS ANGERS
Defeat against Nantes and a draw with Marseille has drag Angers further away from the top of the Ligue 1 table. A win against Troyes should be of assistance to Angers morale. Troyes are currently hovering above the relegation zone.

CLERMONT FOOT VS MARSEILLE (FRENCH LIGUE 1)
It’s been a steady fall for Clermont Foot. Monaco might take the opportunity with a win to move two points above newly-promoted Clermont Foot in the league standings.

MARSEILLE VS LENS (FRENCH LIGUE 1)
Marseille with a game in hand is second to Paris St. Germain in the Ligue 1 standings. They will open a five-point lead on Lens with a win. Lens are aware of what a win can do for them at the end of the round.

BOTH MILAN TEAMS ARE UNBEATEN IN THE SERIE A THIS SEASON. THEY ARE BOTH 2 POINTS FROM THE TOP OF THE LEAGUE.
AC Milan will look for a win against Spezia, while Inter Milan will host an Atalanta side that is three points away.

JUVENTUS VS SAMPDORIA (ITALIAN SERIE A)
It took Juventus five games to arrive at their first win of the season in Serie A. The plan here for Juventus is to double their victories and make a move into the top half of the league standings. Sampdoria is their next opponent. They share one thing in common; a win in five matches.

ROME DERBY – LAZIO VS ROMA (ITALIAN SERIE A)
Roma is four points ahead of Lazio in the Serie A standings.

NAPOLI VS CAGLIARI
Napoli will be making it 6 wins from 6 if they are to get another win at home against a relegation-zoned Cagliari.

BARCELONA VS LEVANTE (SPANIS LA LIGA)
After back-to-back goalless draws in the Spanish La Liga, Barcelona will be hoping to bounce back at home and pick up three points from a win against Levante.


ALAVES VS ATLETICO MADRID (SPANISH LA LIGA)
Atletico Madrid will take an Alaves side that has lost every match they’ve played so far in the Spanish La Liga season. Should Atletico Madrid extend Alaves losing streak, they will put themselves in a position to take advantage of any slip-ups Real Madrid might make.


SEVILLA VS ESPANYOL (SPANISH LA LIGA)
Sevilla has a game in hand that will put them in second place if they are to win. For now, they have to focus on how to get the three points from Espanyol.