THE HIGHLIGHTED FIXTURES FOR THE COMING WEEKEND.

International Break is over and club football is back to continue. The transfer window is over and all the clubs have their roster ready for the first half of the season.

This is our pick for the matches you shouldn’t miss. 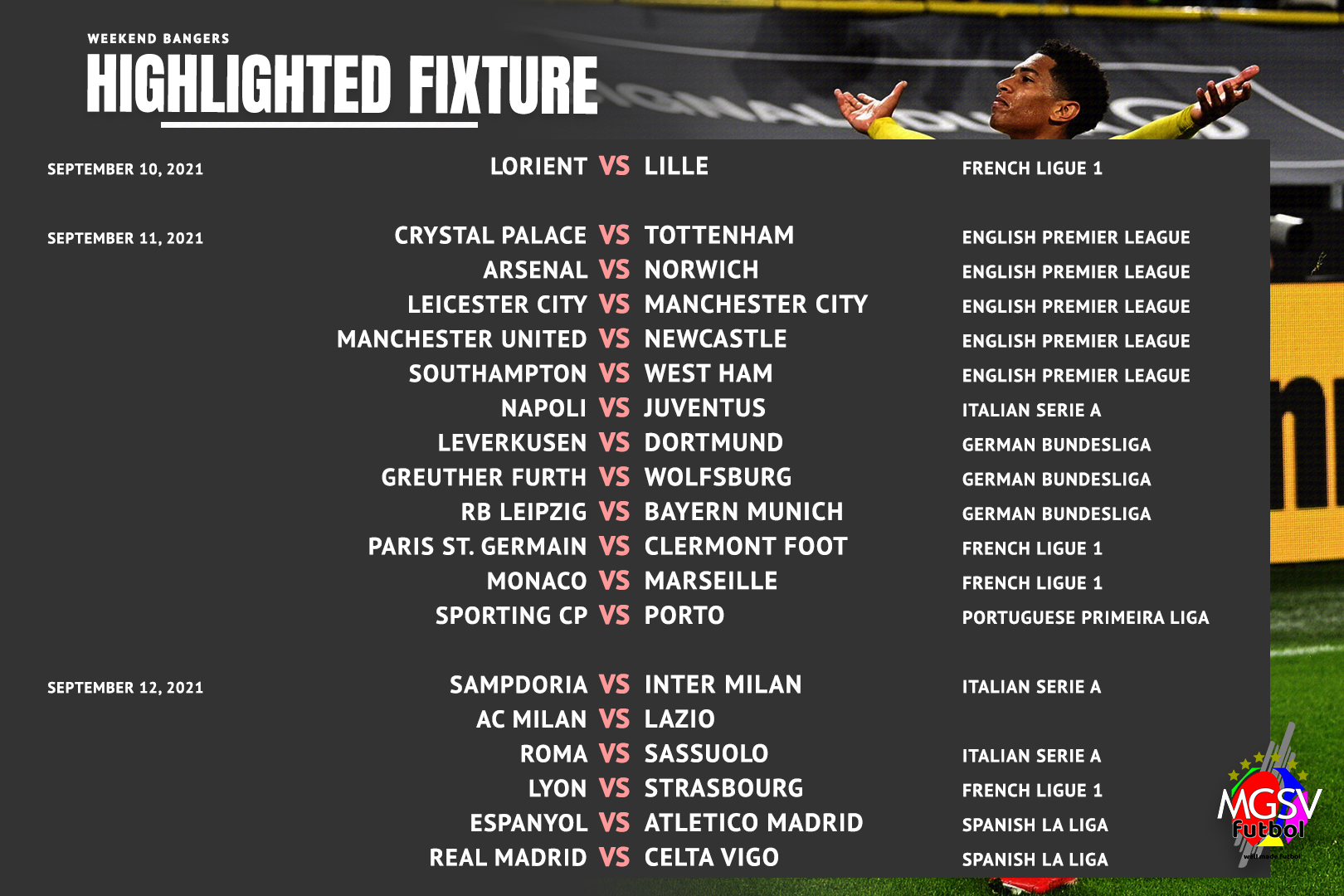 NAPOLI vs JUVENTUS
Napoli missed out on champions league football to Juventus on the final day of the last season.
A couple of rounds into the season and Juventus are in desperate need for a victory at Napoli’s expense. Juventus is without a win in their opening matches: and has already opened their account at home with a defeat.
Juventus will need a win in Naples to make up for a home defeat to newly-promoted Empoli.
While the victories have been narrow, but Napoli has been picking up the three points. Juventus on the other hand is on a point from six available.

AC MILAN vs LAZIO
Lazio is top of the Italian Serie A table after two rounds played of the season. They are on six points with four other teams; one
of the four teams is AC Milan.
They will both be coming to this game on the back of a big home victory. Lazio will be coming into the game after a 6-1 victory against Spezia.
AC Milan comes to the fixture on the back of a 4- 1- win against Cagliari.
They’ve had a healthy start so keeping things that way will be the plan for both sides.

Inter Milan and Roma will hope to take advantage of the “AC Milan vs Lazio result by picking up the maximum points from their respective matches. Inter Milan is at Sampdoria, while Roma host Sassuolo.

ROMA vs SASSUOLO
Jose Mourinho’s Roma has had the ideal start with two wins from two. The next test for them will be against Sassuolo.

SAMPDORIA vs INTER MILAN
Next up for Inter Milan in their title defense season is Sampdoria.

LEVERKUSEN vs DORTMUND
A point difference between the two. Leverkusen has scored 4 goals in their last two matches.
Dortmund is coming into the game after escaping dropping points in the last round against Hoffenheim.

GREUTHER FURTH vs WOLFSBURG
Wolfsburg is the only side with a perfect win record after three rounds. They get to stretch it to four when they face newly promoted Greuther Furth who are hovering around the relegation zone.

RB LEIPZIG vs BAYERN MUNICH
Dayot Upamecano [center Back], Marcel Sabitzer [center Midfielder], and Julian Nagelsman [manager] have moved from RB Leipzig to join Bayern Munich.
Bayern Munich is two points from the top of the league and will be taking on an RB Leipzig side they helped weakened.

LORIENT VS LILLE
With a win in their first four matches of the new season, Lille’s title defense season has not started as well as it needed to be. They will go to Lorient in search of a successive league victory to get them back on track.

PARIS ST. GERMAIN vs CLERMONT FOOT
There are four points between the two sides.
Paris St. Germain has been making the right moves to reclaim their title as league champions by being the only team in Ligue 1 with a 100% winning start to the season after four rounds.

Paris St. Germain will take on a newly-promoted and still unbeaten Clermont Foot.

MONACO vs MARSEILLE
Two sides that are pre-season favorites to be title contenders.
After winning their first match of the season in four matches, Monaco will host Marseille.

LYON vs STRASBOURG
Lyon will want to build on their win at Nantes in the last round with a home victory over Strasbourg. Both teams are coming to this game after picking up their first win of the season in the last round.

CRYSTAL PALACE vs TOTTENHAM
Tottenham have been limping to the top with 1-0 wins in all their matches. They take on a Crystal Palace team in search of their first win of the season.
Tottenham is top of the Premier League table after 3 matches by being the only team in the league with a perfect winning start.

ARSENAL vs NORWICH
They are both on zero but Arsenal might be in a more desperate need of a win.

There are three teams in the Premier League without a point after three rounds played of the season. Arsenal and Norwich are part of the three.
Arsenal has very little excuse to be at the bottom of the league. Norwich City’s excuse is that they are a newly-promoted team that is adjusting to the advancement.

LEICESTER CITY VS MANCHESTER CITY
They come into the game equal on points.
The last time they met, Leicester City came out on top and won the FA Community Shield.

SPORTING vs PORTO
Both teams are two points behind the league leaders (Benfica).
Sporting CP title defense season has them going against Porto in the 5th round of the 2021/22 Primeira Liga.

SANTA CLARA vs BENFICA
Benfica will take a win against Santa Clara to guarantee they keep the top spot.

SPANISH LA LIGA
Sevilla and Barcelona were scheduled to play over this weekend but precautionary measures for the COVID-19 pandemic were taken by the league because of many key players coming back from an international break.

Atletico Madrid narrowly avoided defeat against Villarreal in their last match. They won’t want to drop any more points this early in the season if the objective is to retain the league title. Luckily for Atletico Madrid, Espanyol is not having the best start to their season. Antoine Griezmann is back with Atletico Madrid. Will he make up for the league success he missed out on?