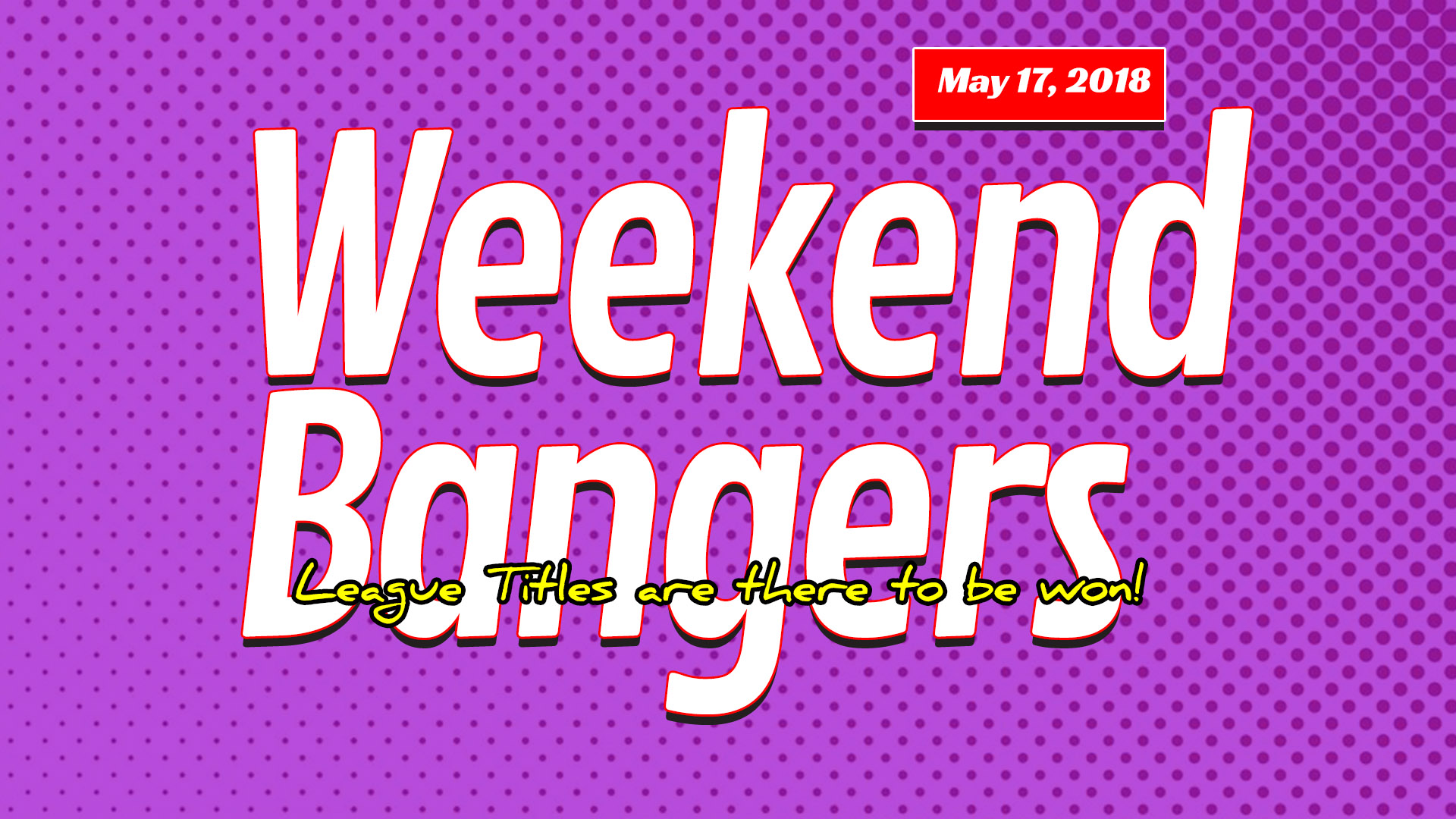 Champions to be made.
Relegation to be confirmed.
Qualification for Champions League and the Europa League football to be settled. 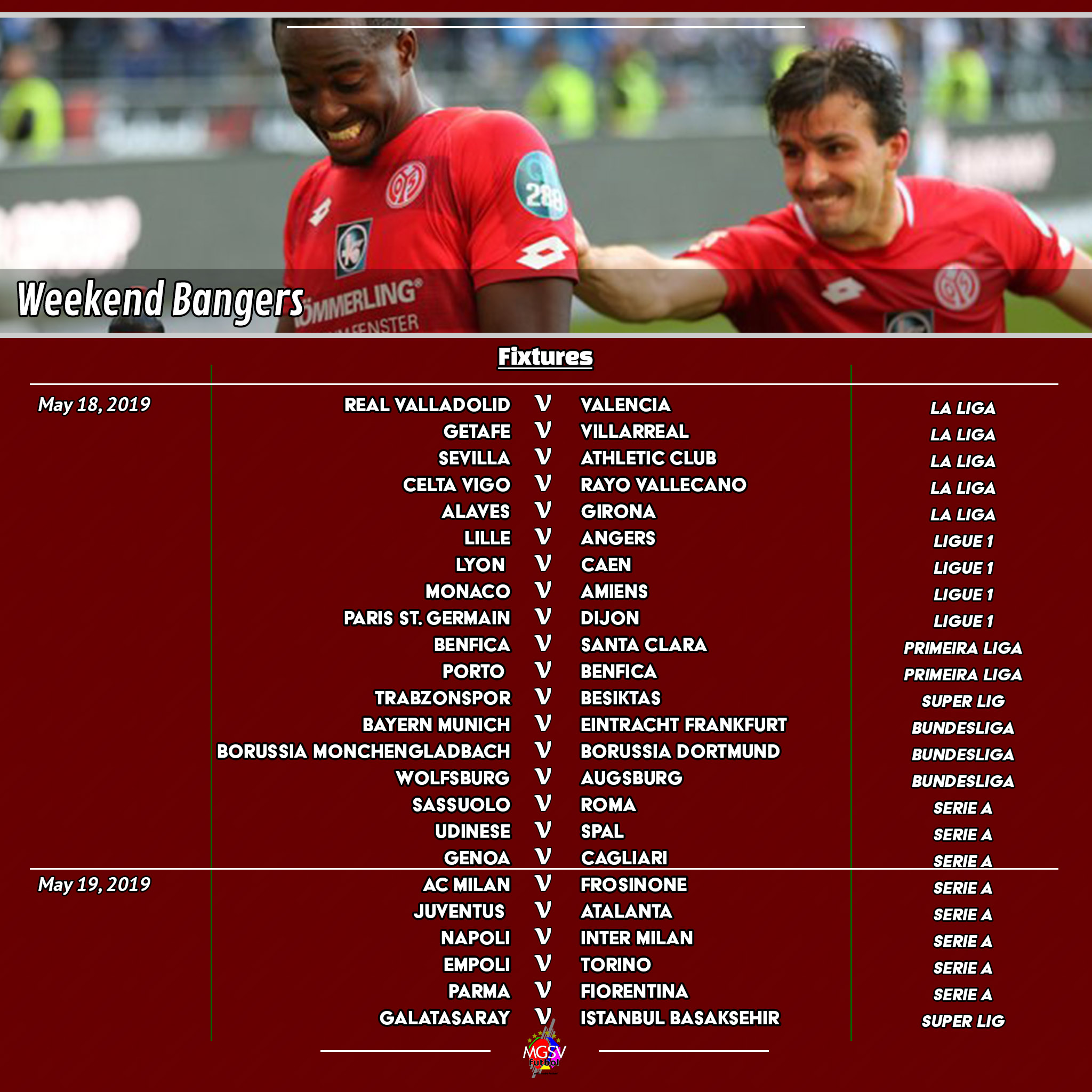 Bundesliga – Round 34
Borussia Dortmund will be in search for a win against Borussia Monchengladbach. A win for Dortmund + an upset at the Allianz Arena will hand them the Meisterschale.

Bayern Munich’s failure to get the maximum points against Leipzig in the previous round and Borussia Dortmund’s hard-fought home victory against Fortuna Dusseldorf has dragged the title race to the final day of the season.

A point at home against Eintracht Frankfurt should do the job for Bayern Munich to keep their crown as German champions for the 7th-straight year.

Borussia Monchengladbach must hold on to their 4th- position by getting a positive result when a determined Borussia Dortmund comes to visit, while Eintracht Frankfurt will be seeking for the best they can get when they visit league leaders Bayern Munich.

Wolfsburg is a back-to-back relegation survivor in the previous seasons, but they have a slim but realistic chance of playing Champions League football next season.

Highlighted Bundesliga Fixtures of Round 34 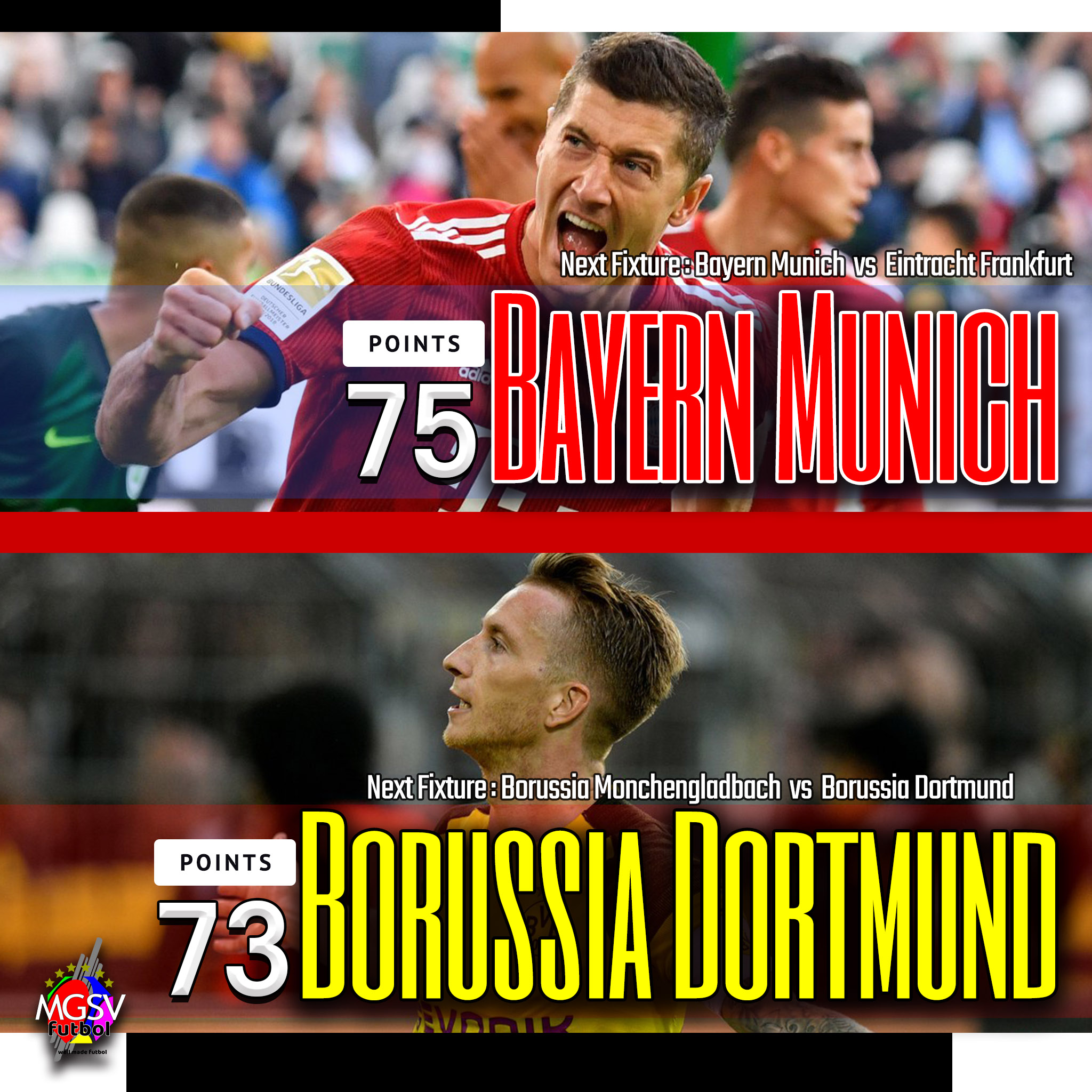 Italian Serie A – Round 37
Inter Milan and Atalanta are looking to put themselves in a safe position before the final round of the season.

Atalanta must dampen Juventus title celebrations. Inter Milan get something at San Paolo.

All four teams did themselves a huge favor by grabbing three points in the previous round.
The neutral fan will be rooting for Atalanta to make it to the Champions League.

AC Milan and Roma could take advantage of the scheduling and the opposition. 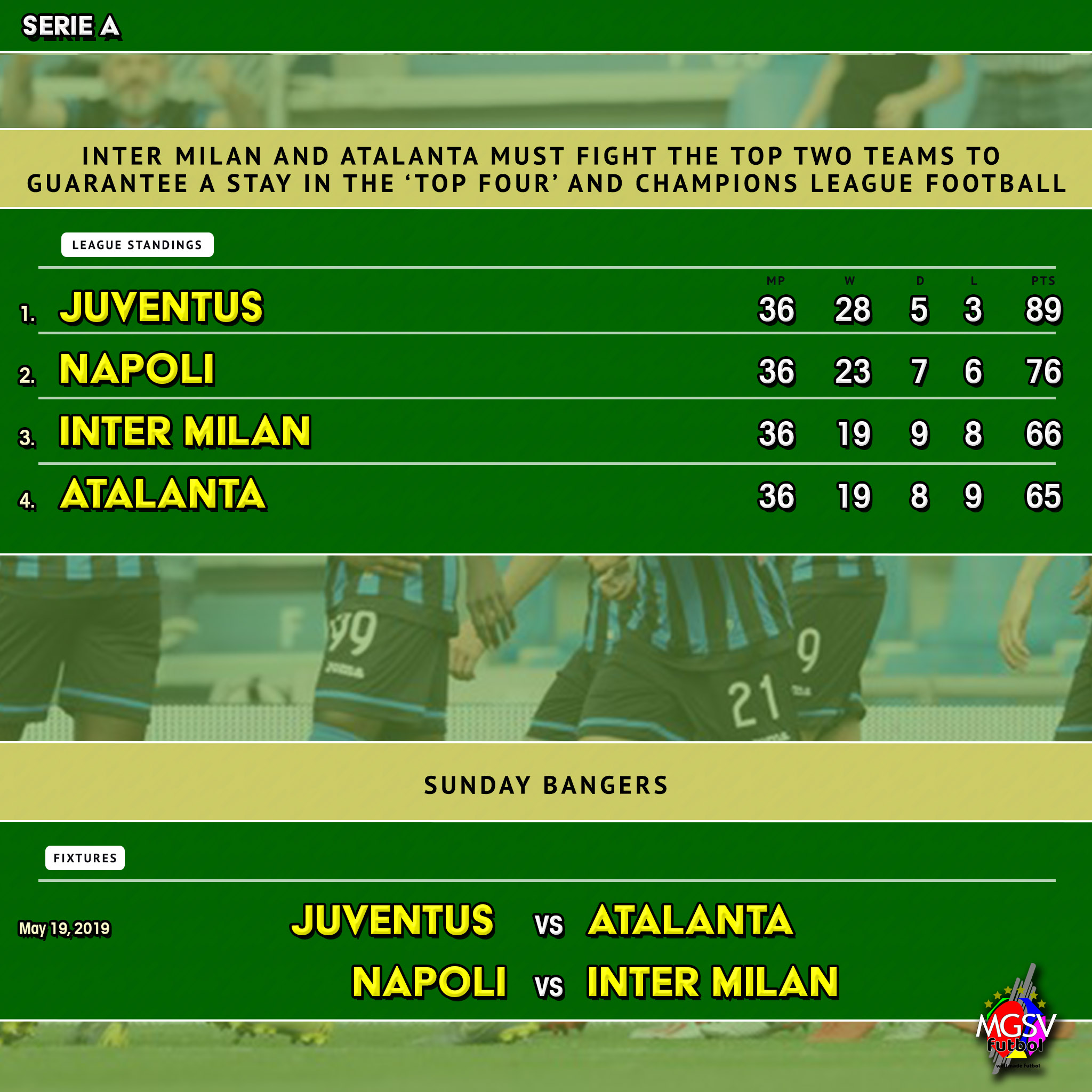 While Inter Milan and Atalanta will have a daunting task of going away to face teams that have already clinched Champions League football and have nothing left to play for, AC Milan will be playing at home against a relegated team, and Roma will have to get a win against mid-table Sassuolo.

If Roma does the probable and get a win at Sassuolo, and AC Milan does their part and gets a win against Frosinone, both teams can rationally hope that Juventus and Napoli will get a victory against Atalanta and Inter Milan respectively.

Highlighted Serie A Fixtures for the weekend
May 18, 2019
Sassuolo vs Roma

May 19, 2019
AC Milan vs Frosinone
Juventus vs Atalanta
Napoli vs Inter Milan

The Relegation battles
May 18, 2019
Udinese vs SPAL
Genoa vs Cagliari

La Liga – Round 38
The final day of the season in Spain.
The title has been won and ¾ of the Champions League teams are confirmed. The final spot is up for grabs and Valencia is leading the race.

Fixtures for the Champions League hopefuls 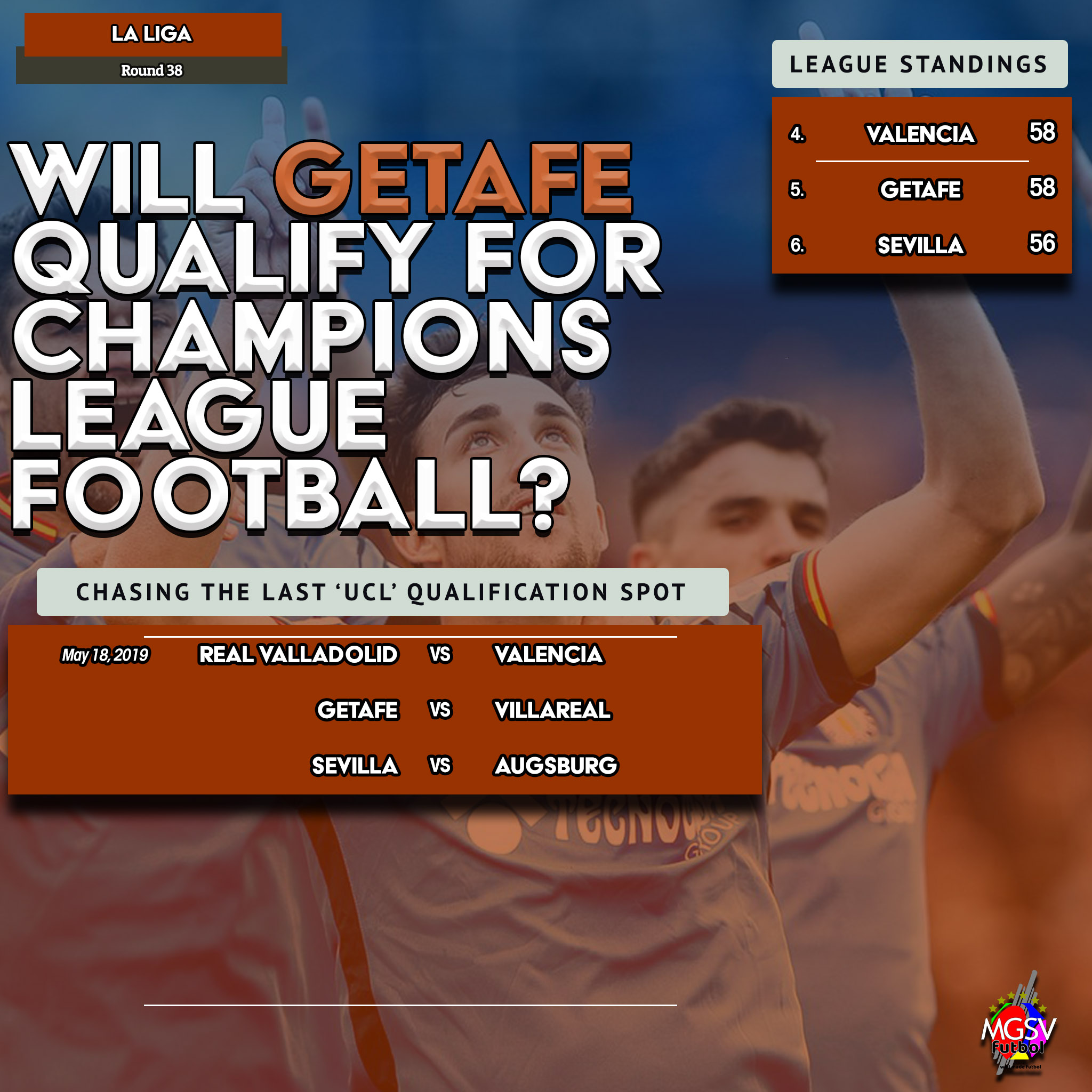 May 18, 2019
Real Valladolid vs Valencia
Getafe vs Villarreal
Sevilla vs Augsburg

Girona is favorite to be the third team to get relegated.
Girona is likely to complete the relegation list after losing a lead and suffers defeat at home to Levante.

May 18, 2019
Celta Vigo vs Rayo Vallecano
Alaves vs Girona 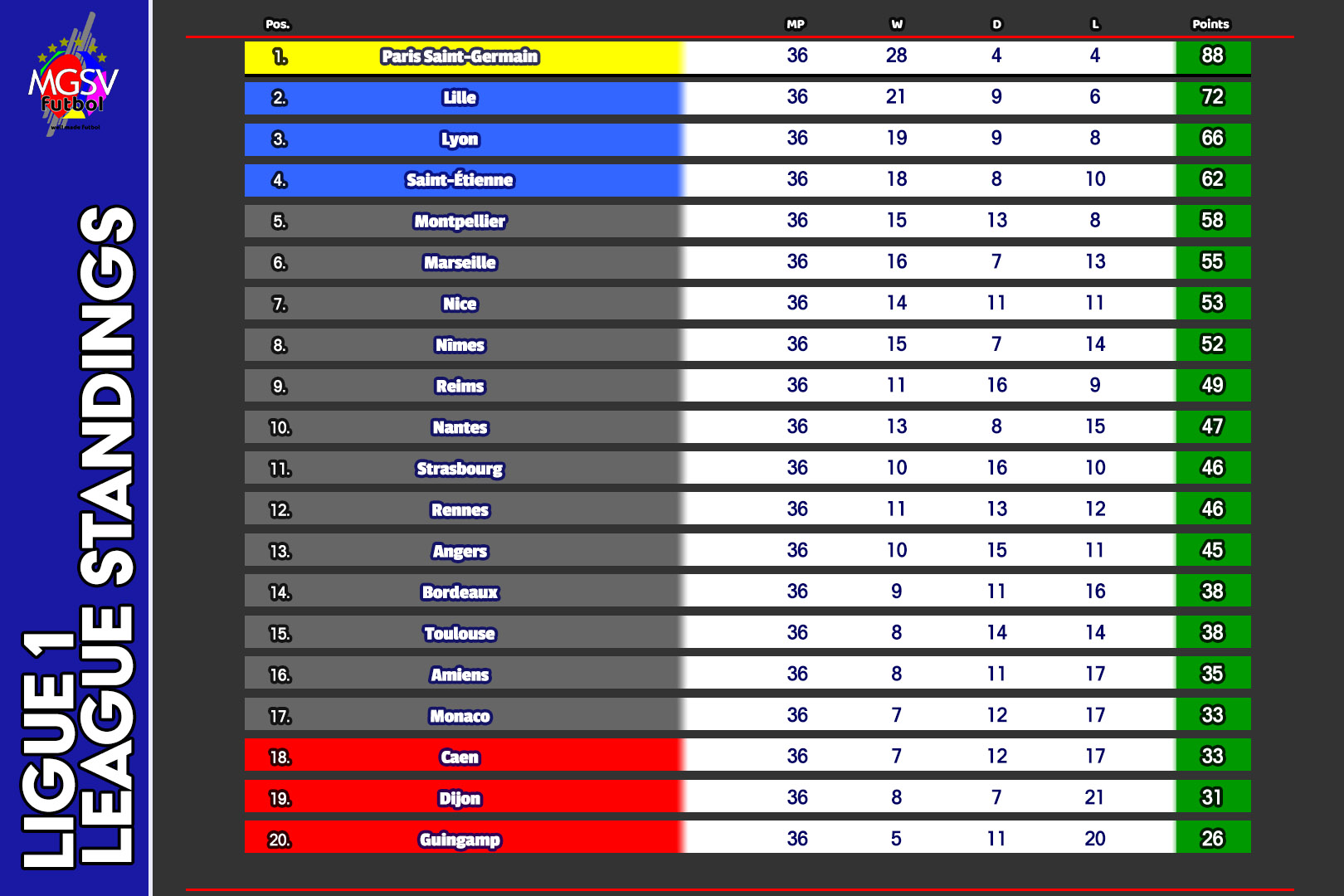 Paris St. Germain hasn’t ended the season as strongly as they started but with the title wrapped up, the worries are not alarming.

Lille have virtually clinched 2nd-place in the league and the direct qualification for Champions League football in the coming season.

Lyon will be looking to get the result that confirms 3rd-place in the league. Their hope will be that Chelsea will then win the 2018/19 UEFA Europa League final to grant them direct qualification to the next season’s Champions League.

Lyon will be facing a Caen side that is looking for safety in the league. Caen’s relegation battles will require them to get the best results at Lyon.

Key Fixtures of the Round
May 18, 2019
Lille vs Angers
Lyon vs Caen
Monaco vs Amiens
Paris St. Germain vs Dijon

Primeira Liga – Round 34
Benfica in pole position to take the league title from Porto. 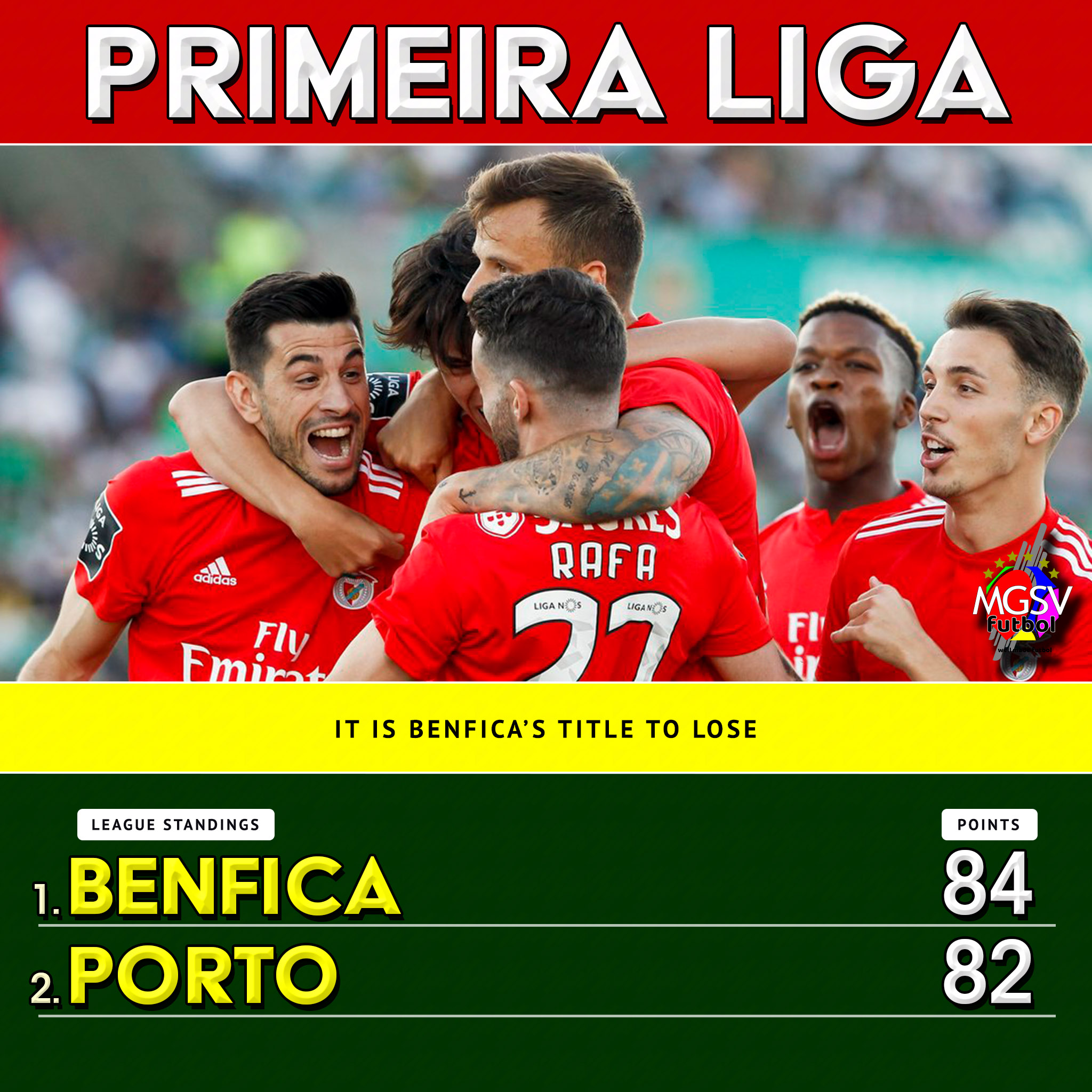 It will be a big upset if the Benfica isn’t Portuguese Champions at the end of the final whistle.
While Porto gets a more competitive match against SportingCP on the final day of the season, Benfica will go in with a 2-point lead at the top of the table and will need just a point at home against Santa Clara to take the Portuguese title.

Super Lig – Round 33
No incentives needed. The top 4 teams in the Turkish Super Lig will have a chance at the closest competition.
Galatasaray – 66 points
Istanbul Basaksehir – 66 points
Besiktas – 62 points
Trabzonspor – 57 points

Galatasaray is two rounds away from retaining their title as Turkish champions. 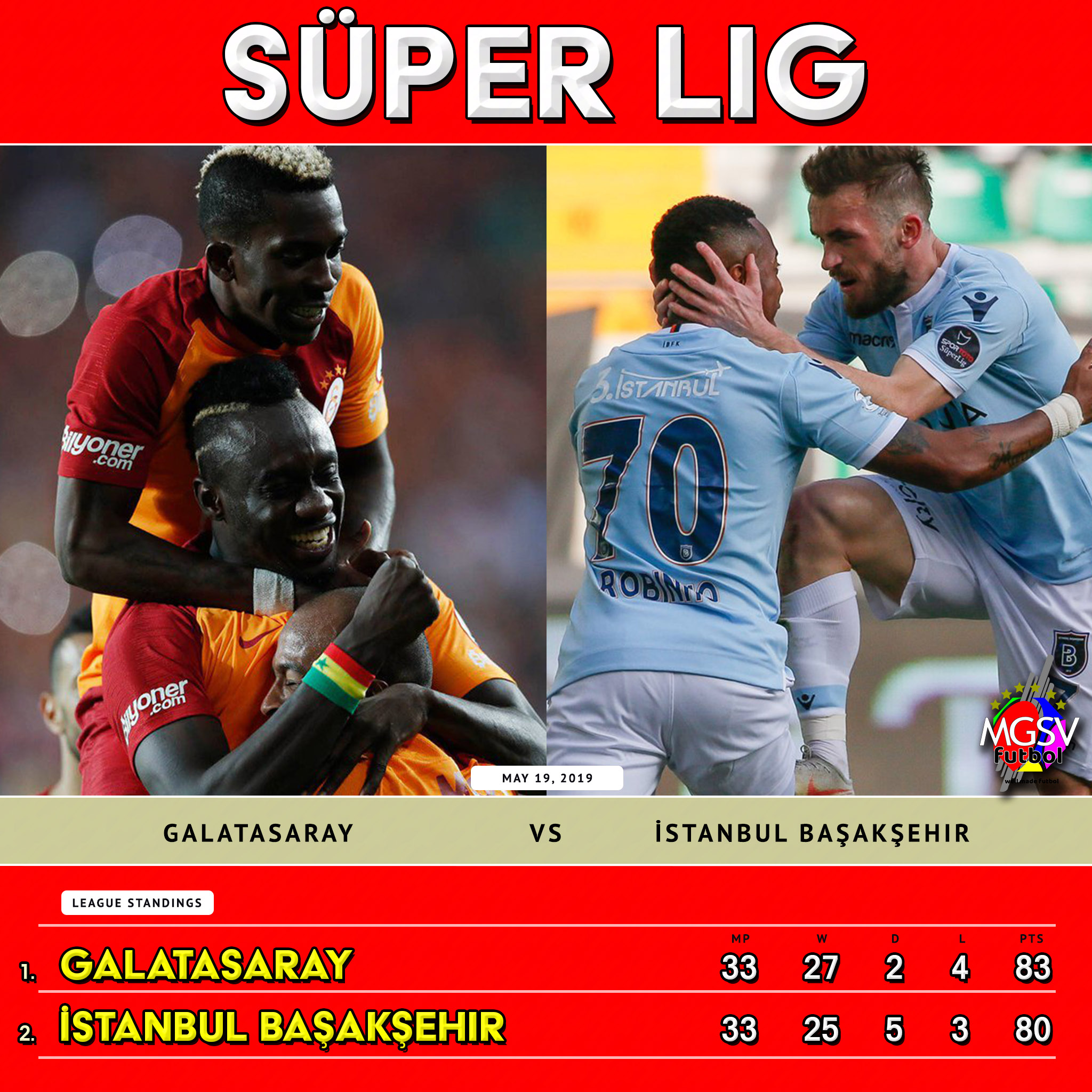 The earlier meeting between the two was a ‘1-1’ draw. A winner here will be picking up the title.

May 19, 2019
Galatasaray vs Istanbul Basaksehir

Just in case they play out another draw like their meeting in the first half of the season, Besiktas could use a victory against Trabzonspor to get into the title race on the final day of the season.