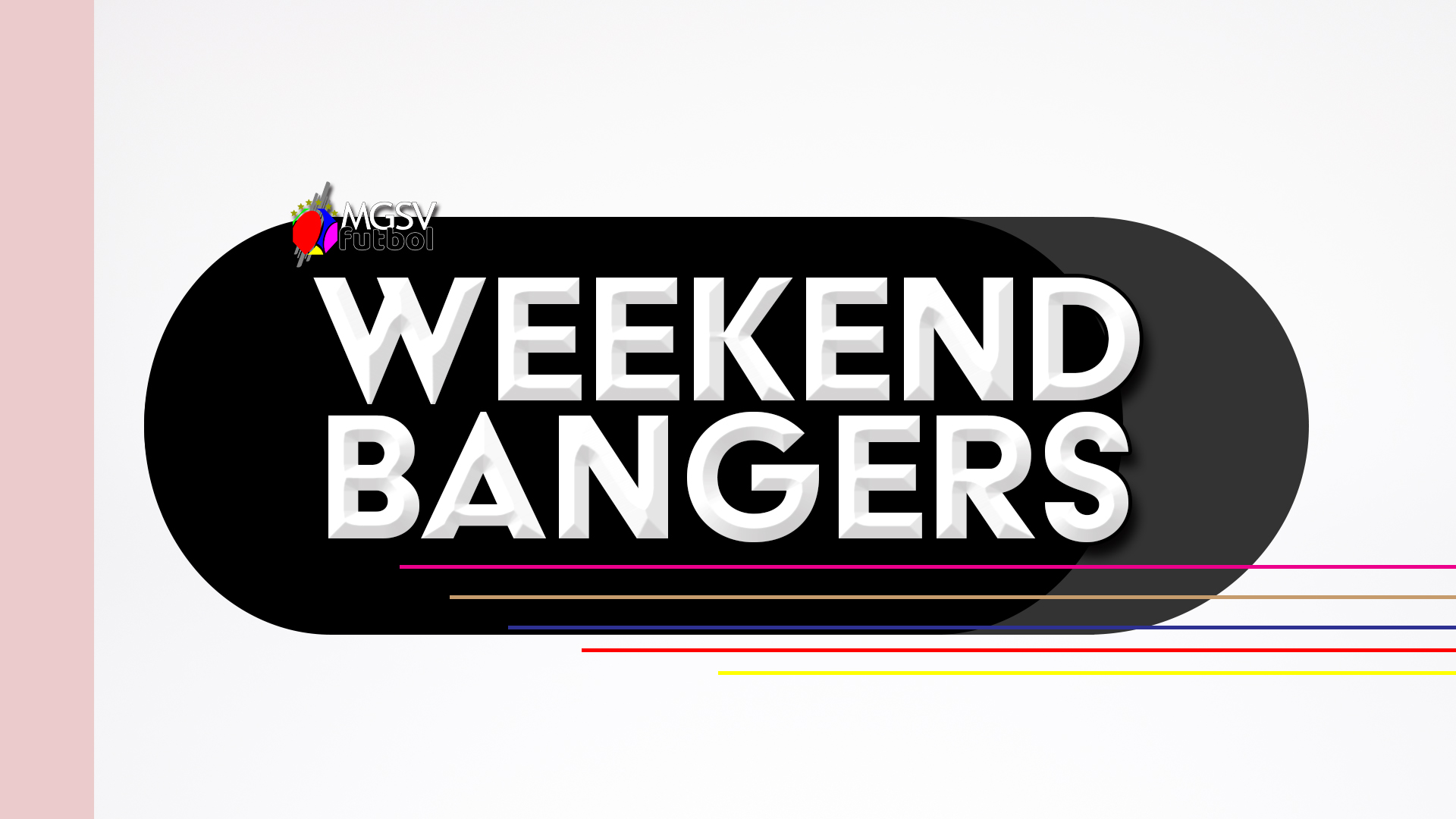 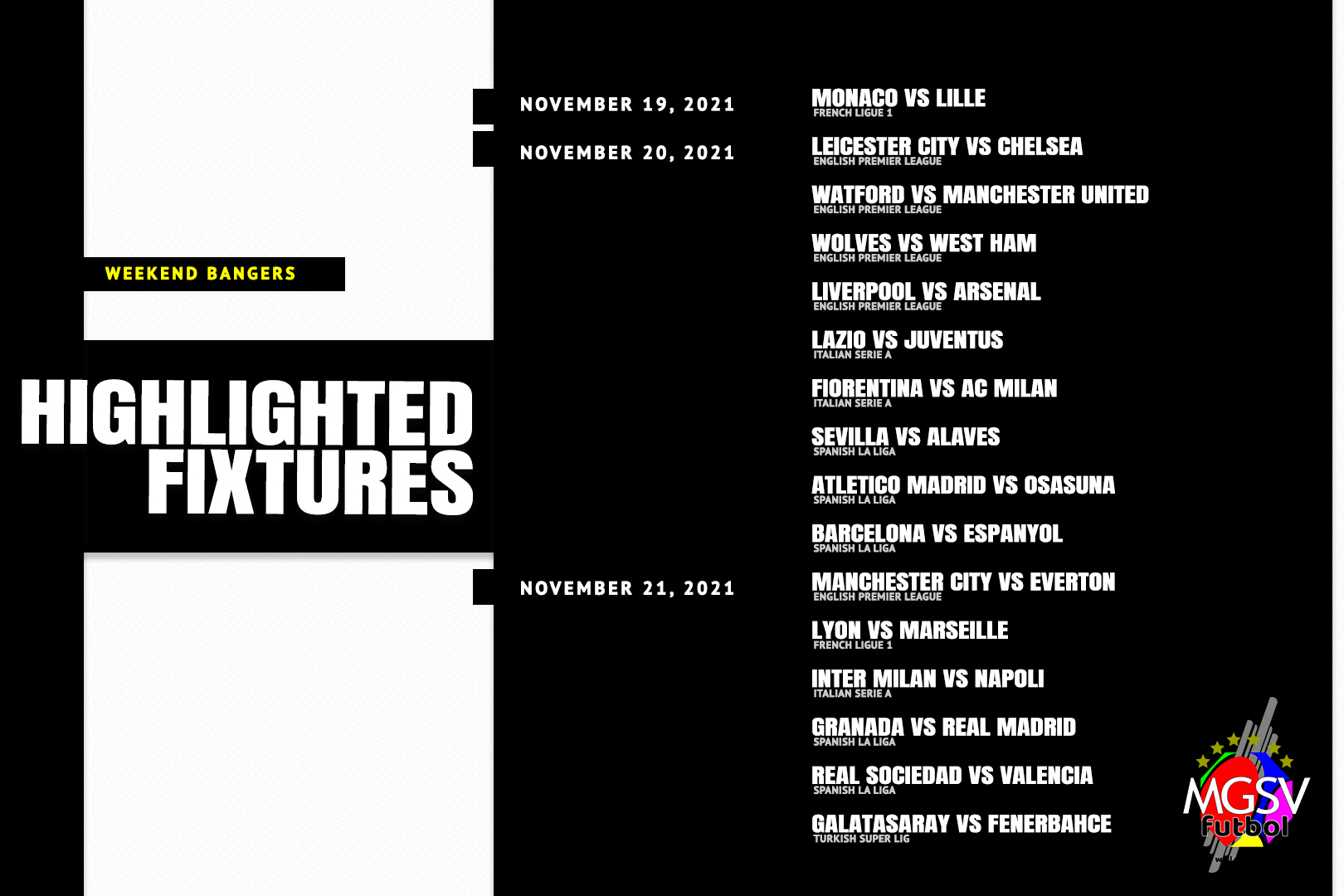 Chelsea is looking for the results to break away from the 4 teams on their tails in the Premier League, Bayern Munich is looking for the points to widen their Bundesliga lead on Borussia Dortmund, Napoli and AC Milan are both looking for an extension to their unbeaten start to their season in Serie A, Paris St. Germain will be running with the Ligue 1 with another win, and Real Sociedad will do what it takes to take advantage of their current positioning the La Liga.

LEICESTER CITY vs CHELSEA
Chelsea’s three-point lead at the top of the Premier League standings will remain or grow if they can grab a win at Leicester.
Leicester City has dropped points in their last two league matches.
Should the unlikely happen and Chelsea gets beaten at Leicester, Manchester City is the team in a position to take the most advantage of it.

MANCHESTER CITY vs EVERTON
Manchester City moved a win from the top of the table after winning the Manchester Derby at Old Trafford. If they take another maximum point at home against an Everton team facing a sixth successive match without a win, Manchester City will allow the chance for equalling the points for the top spot.

WOLVES VS WEST HAM
West Ham got third place after handing Liverpool their first defeat.
A win against Wolves will build on the amazing start to the season West Ham has been having.
There is a seven-point gap between the two clubs; Wolves six points from the top four, and West Ham a win from the top of the table.

LIVERPOOL vs ARSENAL
Liverpool has to end Arsenal’s unbeaten streak to get back to a win.
Liverpool’s unbeaten run in the Premier League came to an end in the last round (against West Ham). What response can we expect from Liverpool when Arsenal comes to Anfield?

The last time Arsenal was beaten is ten competitive matches ago: eight of those were league matches made up of 6 wins.

WATFORD vs MANCHESTER UNITED
A relegation-threatened Watford will play host to a Manchester United team that is looking to make up for points dropped in the Manchester Derby.

NEWCASTLE vs BRENTFORD
Newcastle United is the only team without a win after 11 rounds. They get a chance to end that against a Brentford team on a four-game losing run.

Lens is the best of the rest. They will keep it that way by winning against Brest.
Dropping points for Lens will open the way for Nice, Marseille. and Rennes to take advantage.
Lyon was thrashed 4-1 by Rennes in the last round. A win at home helps Lyon recover from the defeat while closing in on the top four

An inspired Rennes will want to follow up a 4- 1 victory over Rennes with a win against a Montpellier side that is coming to this match from a win against a Nice team that will be at Clermont to try and restore the three points.

MONACO vs LILLE
The defending champions are two points behind Monaco and from how their season has been going so far, we don’t see Lille coming from Monaco with the results that will help them get back on track to feeling like how a reigning champion should feel.

GERMAN BUNDESLIGA
Bayern Munich is four points ahead in a title race that currently includes Dortmund and Freiburg.
The three clubs are the only ones with 20 + points.

AUGSBURG vs BAYERN MUNICH
A trip to Augsburg is next for Bayern. As things stood at the end of the 11th round, Augsburg resides in the relegation playoff spot.

DORTMUND vs STUTTGART
Dortmund will get an opportunity at home to bounce back from the defeat at Leipzig in the last round.
Should Dortmund get their desires, Stuttgart will suffer their third successive league defeat in a streak of four league matches without a win.

FREIBURG VS FRANKFURT
In the last round, Bayern Munich handled Freiburg their first league defeat.
What will Freiburg’s response be when they host Frankfurt.

ARMINIA BIELEFELD VS WOLFSBURG
A win is always the target but Wolfsburg will join the 20 + point crew if they avoid defeat.

HOFFENHEIM vs RB LEIPZIG
following their win against Dortmund, RB Leipzig can open a seven-point gap on Hoffenheim and close in on a Champions League qualifying spot with a win.

MONCHENGLADBACH VS GREUTHER FURTH
One point from a possible thirty-three.
10 defeats out of 11 matches. Will the twelfth match get Greuther Furth their first win of the new season?
Not much can be expected from Greuther Furth away from home with the record they have accumulated since the start of the season but football is made for surprises.

SPANISH LA LIGA
Real Sociedad lead the Spanish La Liga title race by a point. But unlike the other three occupants of the Champions League qualification spots, Real Sociedad does not have a game in hand.
Real Sociedad will host Valencia side that squeezed a point from Atletico Madrid in the last round.

Real Madrid is away to Granada.
Sevilla will want to follow up the Seville Derby victory with a win at home against Alaves.
After allowing Valencia to get back from two goals down to take a point, Atletico Madrid will hope they can squeeze the maximum points against Osasuna.
Osasuna is without a win in their last four matches and staring down at a third straight defeat.

XAVI’S FIRST MATCH A FC BARCELONA’S MANAGER WILL BE THE CATALAN DERBY.

With home advantage, quality of the sides, the boost in morale from a new manager (Xavi), and the return of a club legend [Dani Alves]
Barcelona will be the clear favorite in a match that requires a victory to boost the team’s morale after dropping points against Celta Vigo in a disastrous way.

BARCELONA VS ESPANYOL
Barcelona has the opportunity to open a three-point gap with the game in hand but that will start with them winning the derby. Both Barcelona and Espanyol are on 17 points.

ITALIAN SERIE A
Napoli and AC Milan will put their unbeaten run to the test.
On paper, Napoli will have the tougher test. Napoli will be in Milan against the reigning champions, while AC Milan will be away against Fiorentina.

IF THE MILAN CLUBS WIN, AC MILAN WILL BE TOP THE STANDINGS AT THE END OF THE ROUND.

INTER MILAN vs NAPOLI
AC Milan will be wishing success for their city rival.
Inter Milan will want to use home advantage to get the result that will reduce the gap between themselves and Napoli down to 5 points.

Napoli will have to win in Milan to guarantee that they remain in first place. Anything but a win for Napoli opens the avenue for AC Milan to take the top spot with a win.

FIORENTINA VS AC MILAN
With some assistance from Inter Milan, AC Milan will take first place in the title race with a victory.

ATALANTA VS SPEZIA
Atalanta will hold on to fourth place if they can do the expected and beat Spezia.

LAZIO VS JUVENTUS
To avoid going four straight matches without a league win, Juventus narrowly escaped with three points against Fiorentina in the last round.
Can they go to Rome and get a good result against Lazio?

A win for Juventus will cancel the three point-gap Lazio has on them in the standings.

GENOA VS ROMA
There is a point gap between Roma and Genoa but after defeat against Venezia in the last round [and poor results coming into the game], winning against relegation-zoned Genoa is a must for Roma.