At the midway point of the 2019/20 La Liga season and there is nothing separating Barcelona and Real Madrid in points accumulated.

Guessing Barcelona will be top of the league and Lionel Messi be at the top of the goalscoring list wouldn’t have brought you much in return, but not many would have predicted that the La Liga race was going to be this tight between Barcelona and Real Madrid.

Highlighted changes in the league standings after the round
Martin Braithwaite scored the first La Liga goal of 2020 to give Leganes a lead against Real Valladolid in the 4th minute from kick-off.

The only change in the top four teams is Atletico Madrid and Sevilla switching league positions.

Barcelona blew away their two point lead after a ‘2-2’ draw in the Catalan Derby.
Real Madrid takes a ‘3-0’ away victory against Getafe to move back equal Barcelona in points accumulated.

Sevilla loses third place spot after a ‘1-1’ draw at home against Athletic Club.
Atletico Madrid takes three points from a ‘2-1’ victory against Levante to replace Sevilla in third place.

Celta Vigo moved out of the relegation with a point against Osasuna.

The bottom two teams (Espanyol and Leganes) were both involved in a ‘2-2’ draw in their respective matches. Leganes opened the round with a draw against Real Valladolid, while bottom table Espanyol handled a bigger giant by taking a point from Barcelona.

Both Lionel Messi and Karim Benzema failed to add to their scoring, but Luis Suarez did.

Levante falls into the bottom half of the table, replacing Granada. 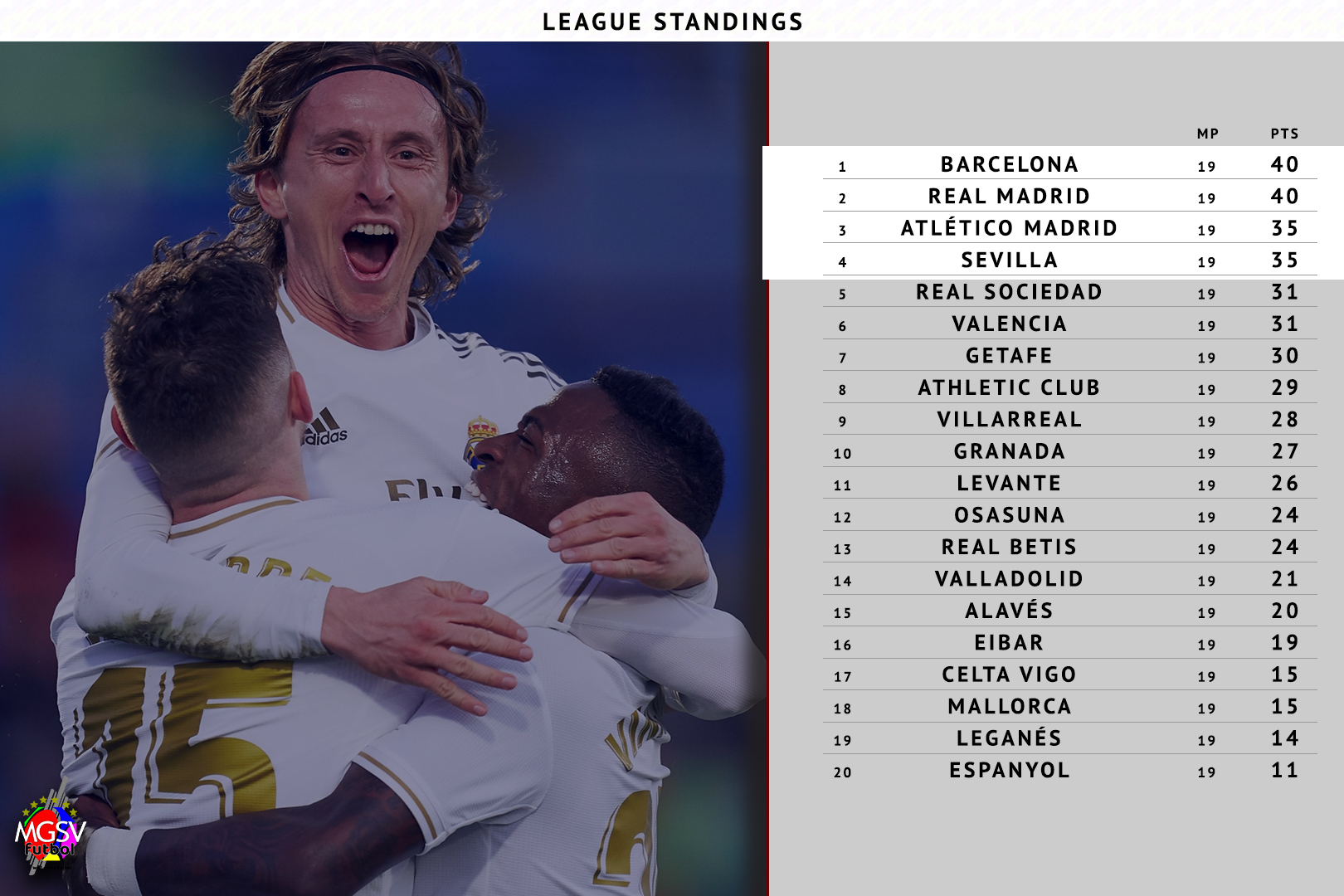 Real Valladolid had to find an equalizing goal on two occasions to avoid a defeat at home to Leganes. It was ‘1-1’ in the first 8 minutes when Real Valladolid and Leganes opened the round.

Maxi Gomez header decided the match for Valencia against Eibar in a close contest.

Thibaut Courtois goalkeeping heroics kept Madrid in the game to pick up a win at Getafe.
Raphael Varane could have bagged two goals if one goals wasn’t given as an own goal. Varanes ariel threat allowed Real Madrid to take a 2-goal lead, before Luka Modric tapped in the third for the 3 points.

A stalemate in the Catalan Derby wiped out Barcelona their 2-point lead in the Spanish La Liga standings.
Frenkie De Jong saw red in his first Catalan Derby, as a 10-man Barcelona side failed to hold on to a lead against Espanyol.

Real Betis missed a penalty and finished with a man down in a ‘1-1’ away draw against Alaves.
Zouhair Feddal took on for the team when by fouling Lucas Perez.
Perez looked to be on his way to score what would have been the winning goal for Alaves.

Ezequel Avila scored in the 83rd-minute to deny Celta Vigo of a deserved win against Osasuna.
Celta Vigo moved out of the relegation-zone with a point from this match.