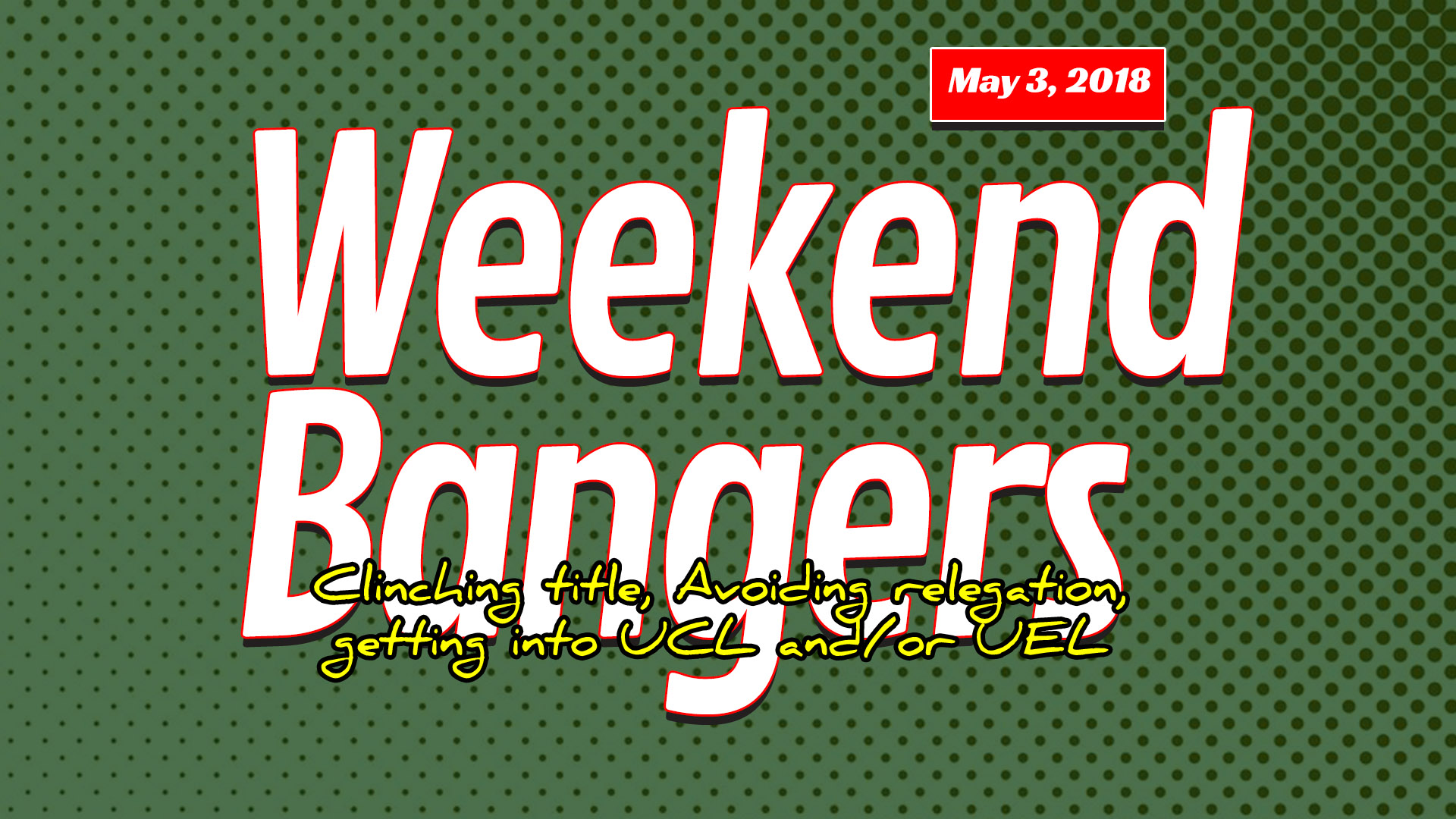 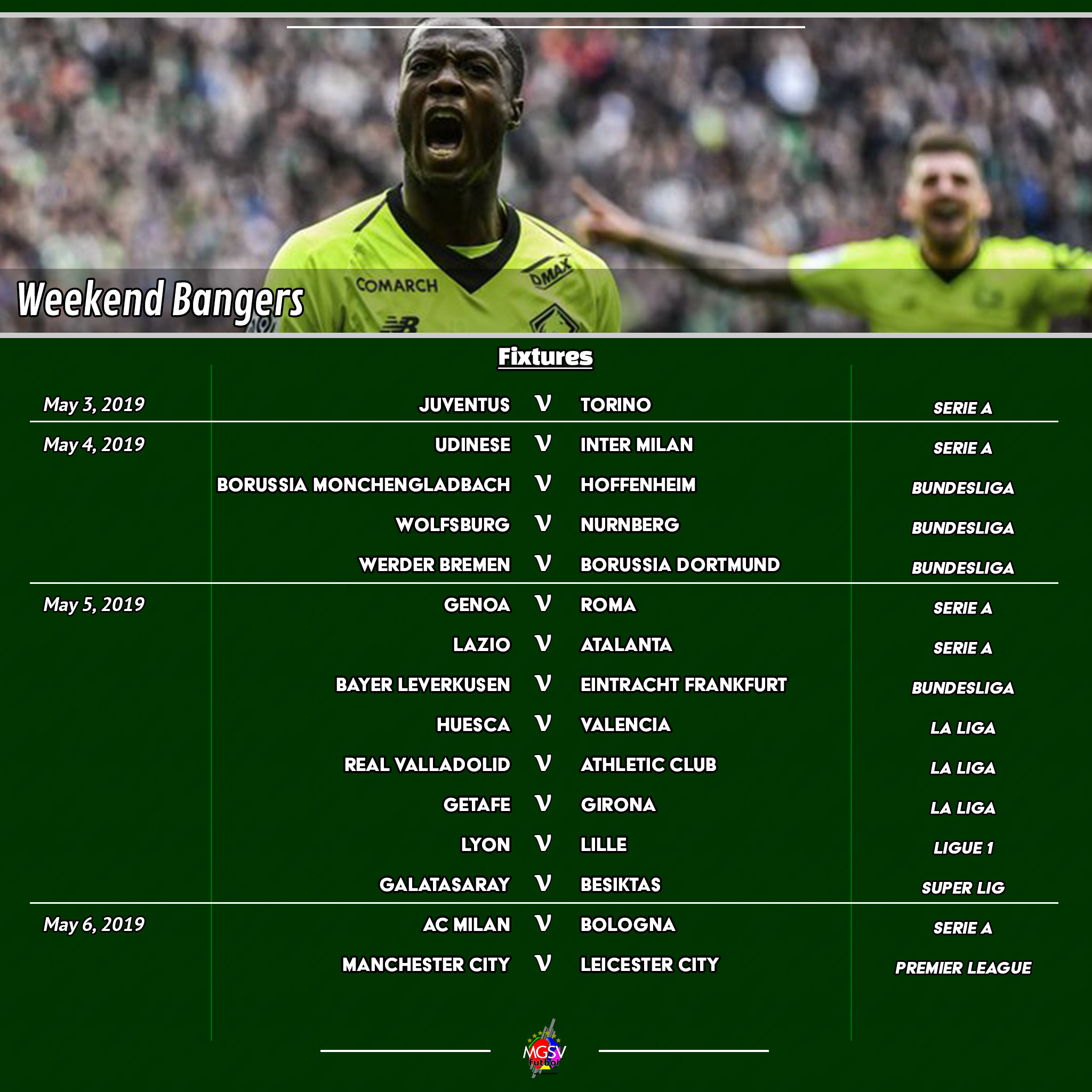 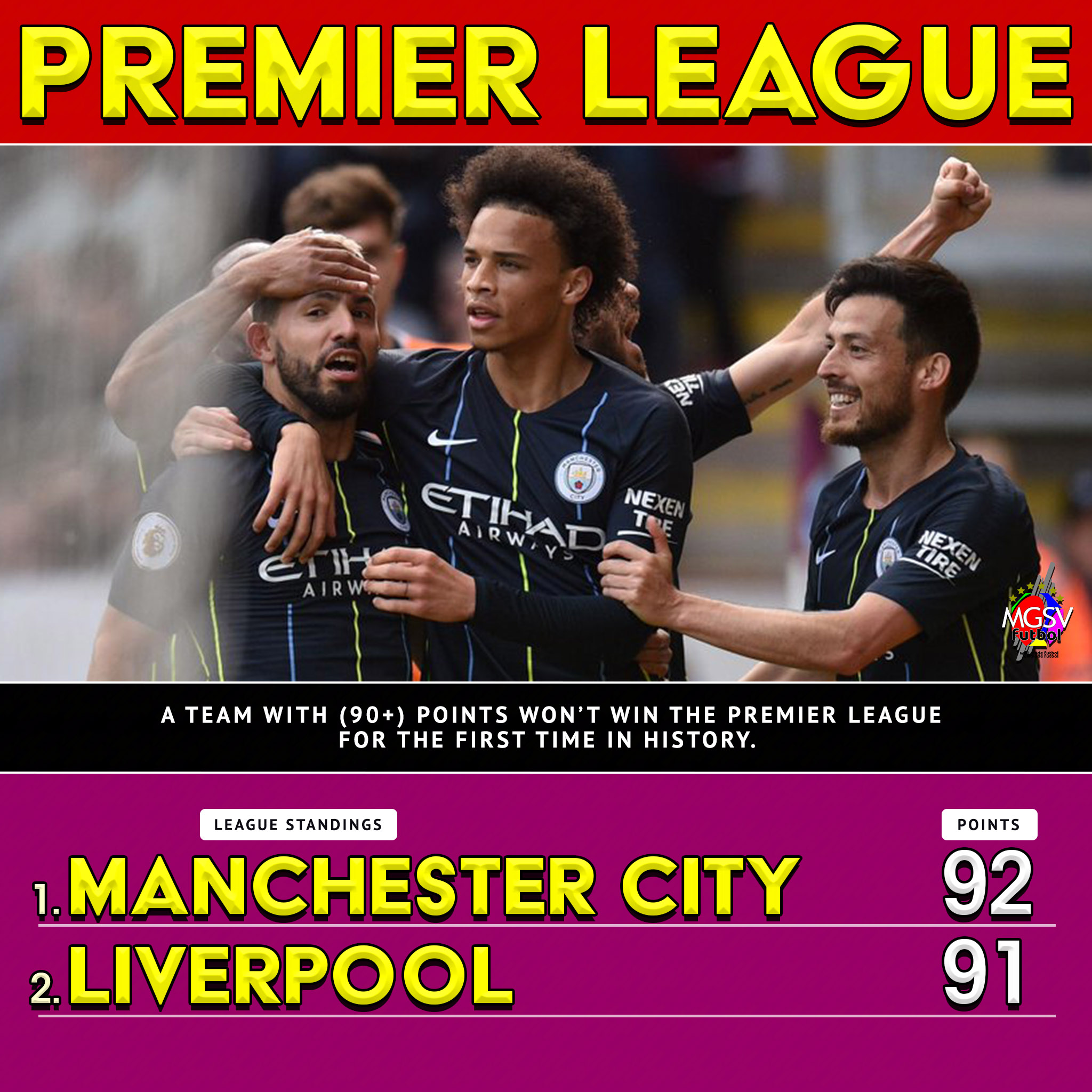 A point remains between the top two sides with only two rounds left of the season. Manchester City is in the driving seat and needs two victories to defend their Premier League crown.

Liverpool needs two more league wins to keep the pressure on Manchester City, and a bit of help to better their title-winning odds.

Champions League and the Europa League finish
Tottenham leads the pack in the race for the final two ‘Champions League’ direct qualification spots in the league. With the exception of Manchester United, the teams have alternative routes to next season’s UEFA Champions League by winning

May 4, 2019
Bournemouth vs Tottenham
Newcastle vs Liverpool

May 5, 2019
Chelsea vs Watford
Huddersfield vs Manchester United
Arsenal vs Brighton

May 6, 2019
Manchester City vs Leicester City

Survival and Relegation avoidance
The list of relegated teams from the 2018/19 Premier League will be completed if Cardiff City does not come out with a win at home against Crystal Palace. Cardiff City will be relegated

Bundesliga – Round 32
Three round left. Nine points are available. Two point gap between the title contenders. 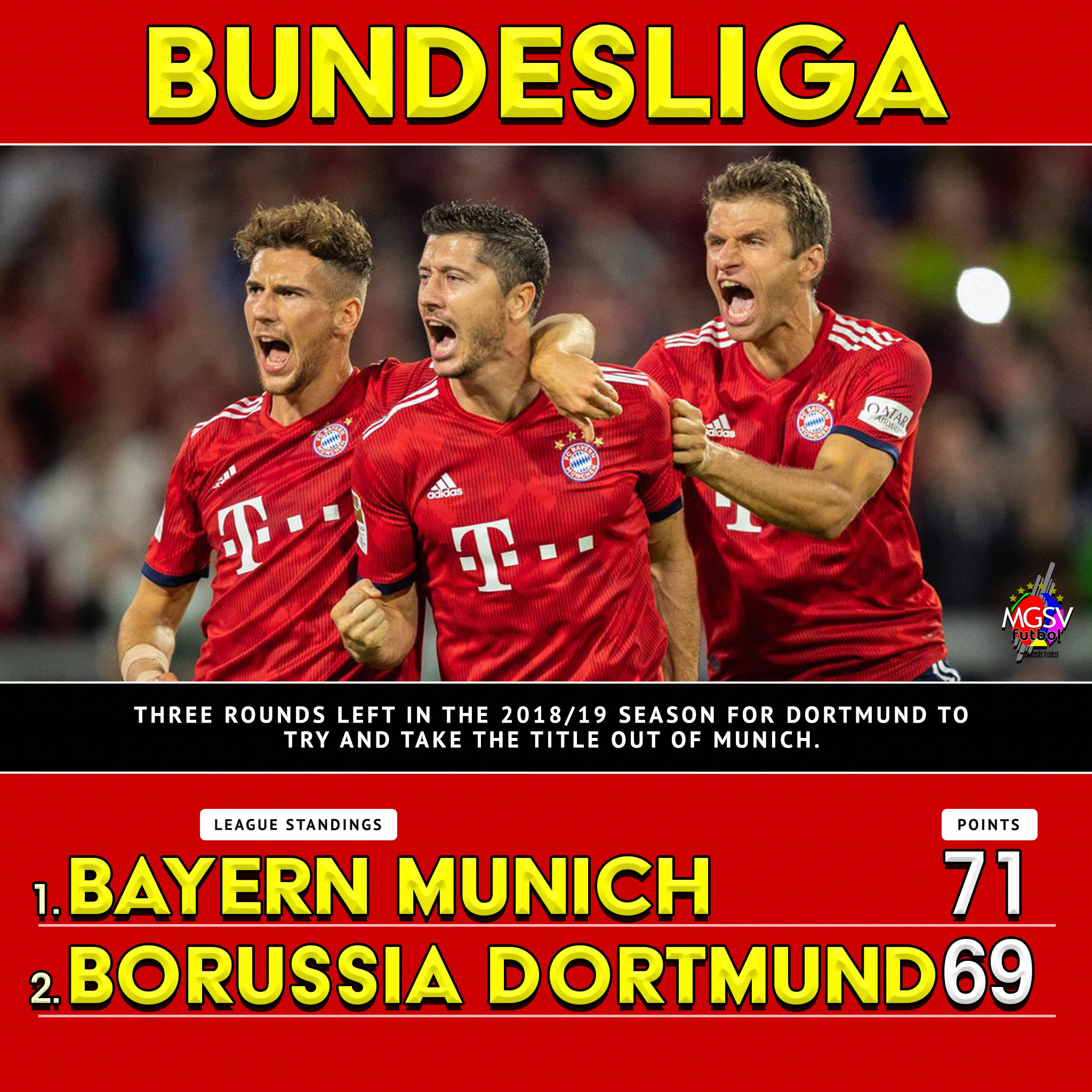 League title race.
Bayern failed to pull away further after managing a draw at Nurnberg on a weekend that saw Borussia Dortmund beaten in the Revierderby by Schalke.

With Borussia Dortmund losing Marco Reus to suspension and the Bayern Munich stretching the lead to two points, the league title looks to remain in Munich for the 7th-straight season.

The final Champions League spot
Mathematically, six teams remain in the race for the final UCL spot in the Bundesliga.

The weekend fixtures for the six teams
May 4, 2019
Borussia Monchengladbach vs Hoffenheim*
Wolfsburg vs Nurnberg*
Werder Bremen vs Borussia Dortmund*

May 5, 2019
Bayer Leverkusen vs Eintracht Frankfurt*

Relegation avoidance in the Bundesliga. – Schalke is close to safety despite a horrendous season.
The best Hannover and Nurnberg can do is get into the relegation play-off spot. Stuttgart’s odds of skipping relegation play-offs is slim. It gets slimmer if they don’t win their next fixture.

The weekend fixtures for the teams involved in the relegation battles.
May 4, 2019
Hertha Berlin vs Stuttgart
Wolfsburg vs Nurnberg*
Bayern Munich vs Hannover* 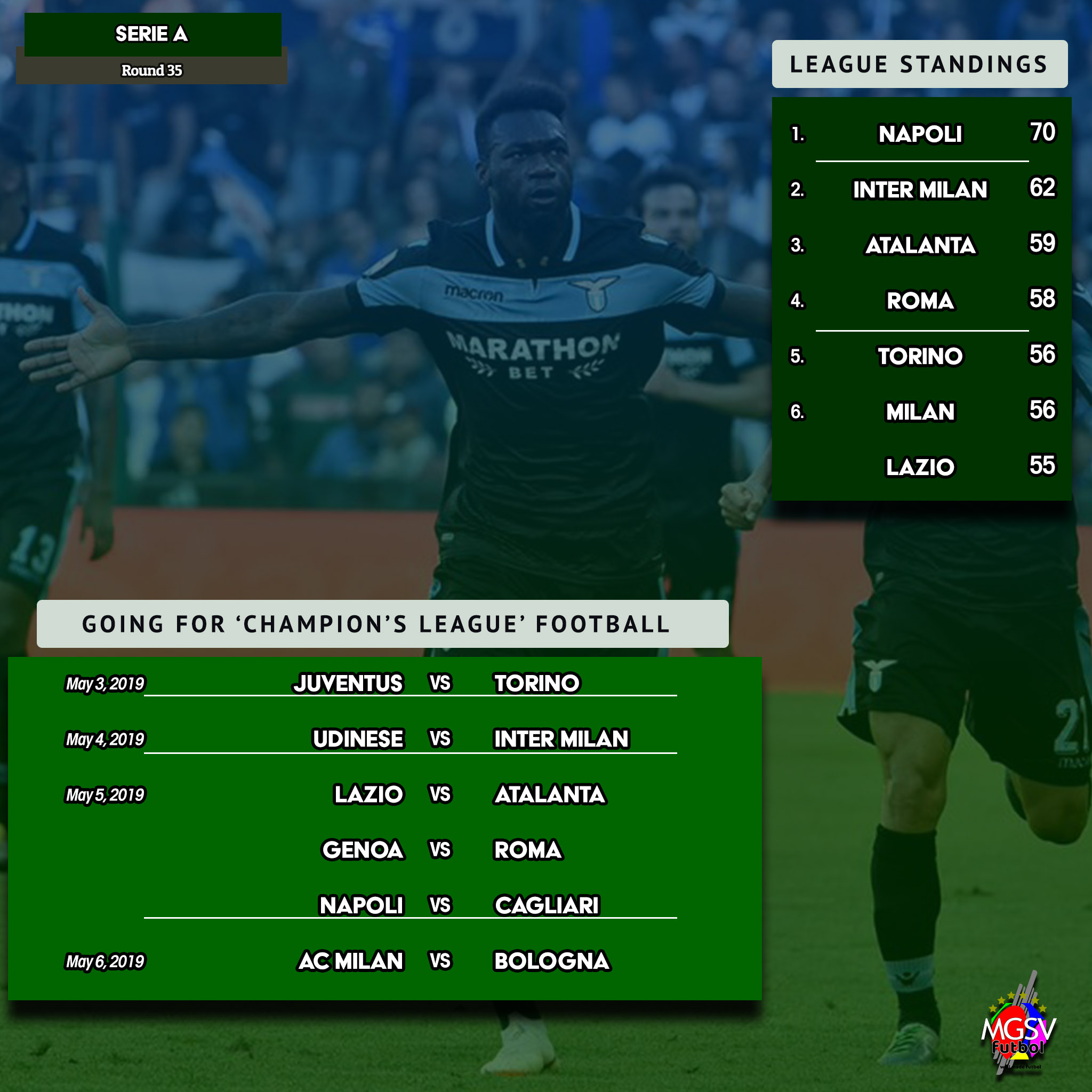 Four games left in the season for the teams to find their resting place in the league standings.
Napoli is just a point away from ‘officially’ securing Champions League football for the coming season.
Inter Milan is in control of their destiny with a comfortable lead.

Can Atalanta hold on to Champions League football?
Atalanta must fend of Lazio to hold on to 4th place in the league.

The ‘Turin Derby’ and the ‘Lazio vs Atalanta’ could be an opportunity for AC Milan to get back into the race if they can find a victory against Bologna.

The weekend fixtures for the teams chasing Champions League football. Atalanta and Torino are in the mix.
May 3, 2019
Juventus vs Torino

May 5, 2019
Lazio vs Atalanta*
Genoa vs Roma
Napoli vs Cagliari

Relegation
Mathematically, half of the league are still under relegation threat. But the keen candidates are

The weekend fixtures for these teams in the relegation battle.

May 5, 2019
Empoli vs Fiorentina
Parma vs Sampdoria
Sassuolo vs Frosinone
Genoa vs Roma *

In ‘Round 35’ – Despite being beaten, Getafe holds on to the fourth place. A ‘2-1’ defeat against Real Sociedad didn’t cost Getafe their Champions League ambitions because of Sevilla’s shocking defeat at Girona. Both Getafe and Sevilla were helped by Eibar win against Valencia, while Valencia benefited from Athletic Club’s failure to get home win against Alaves. Everyone had their luck. Girona’s win against Sevilla comes in handy in their battle to avoid relegation. 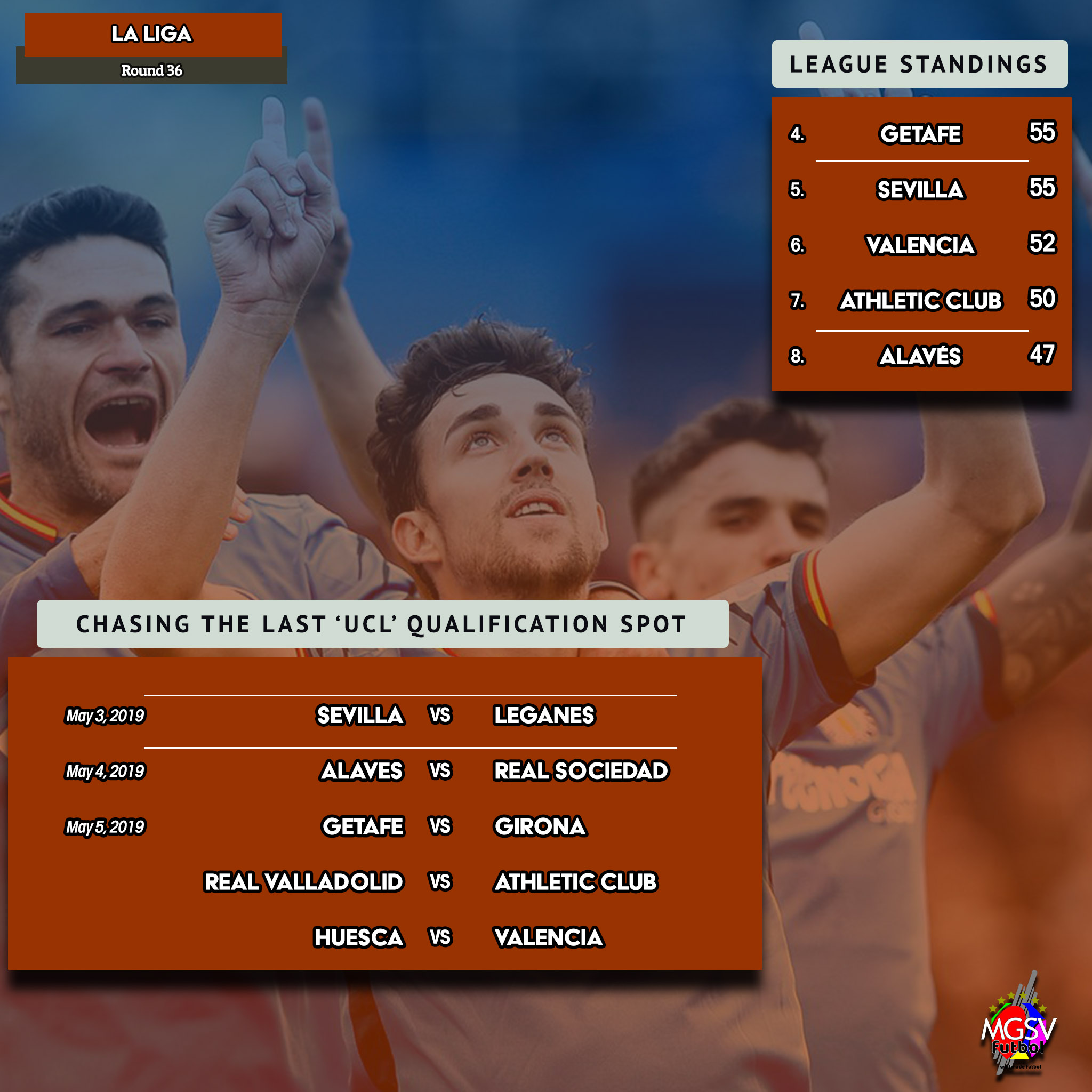 May 5, 2019
Getafe vs Girona
Real Valladolid vs Athletic Club
Huesca vs Valencia*

Relegation is still open
Mathematically, half of the league isn’t safe.

The weekend fixtures for the teams under relegation threat

May 4, 2019
Levante vs Rayo Vallecano
Celta Vigo vs Barcelona

May 5, 2019
Getafe vs Girona
Real Madrid vs Villarreal
Real Valladolid vs Athletic CLub
Huesca vs Valencia

Ligue 1 – Round 35
Four matches left to go and Lille holding firm to the Champions League return. With just a defeat in their last 15 league matches. Lille has scored 5 goals in their last two home games. The most impressive of those wins was the ‘5-1’ thrashing of Paris St. Germain.

It is a must win for Lyon. 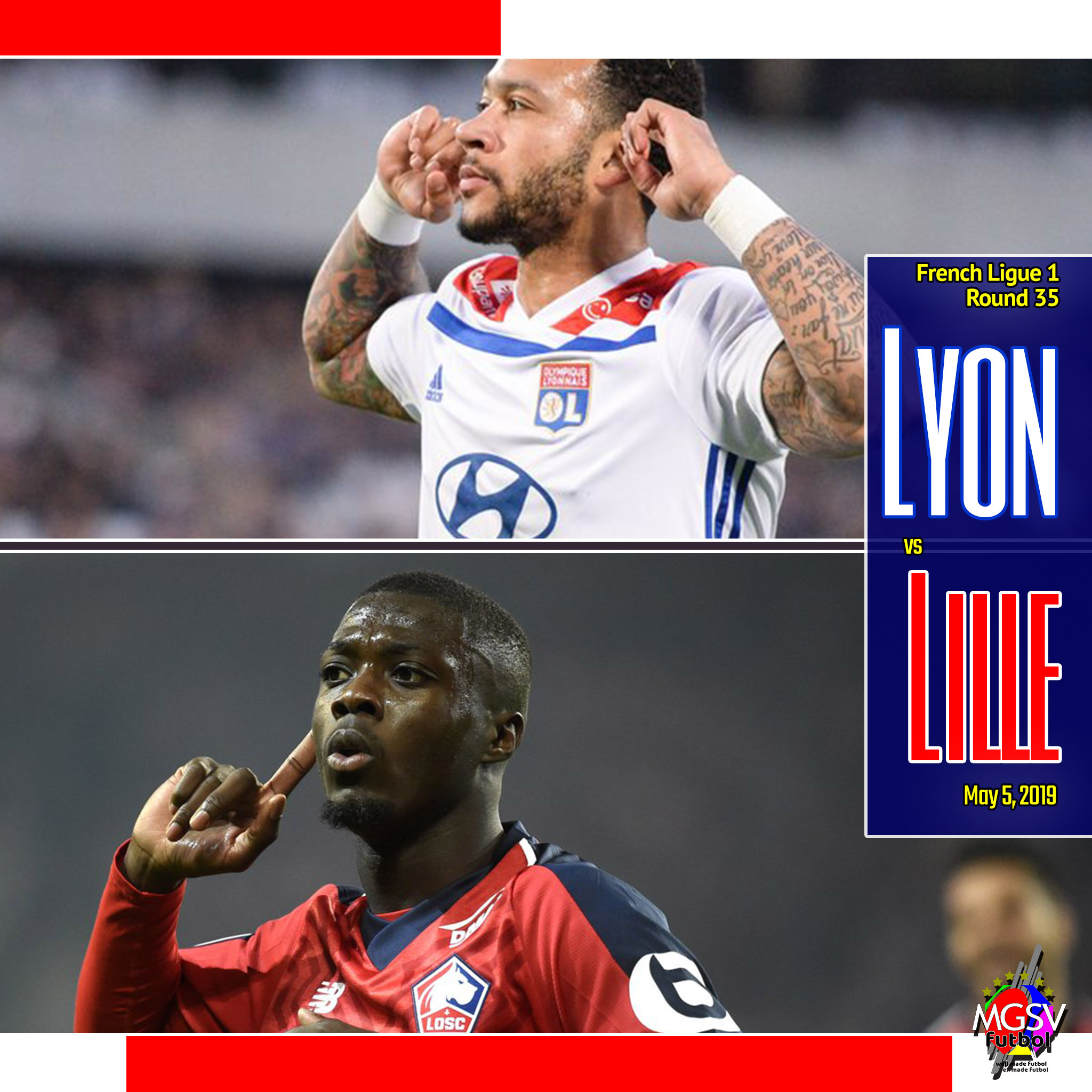 Lyon hasn’t been successful against Lille in their last 4 league meetings (2D, 2L).
For Lille to widen the 6-point gap between the sides with a win will not only kill off Lyon’s direct qualification ambitions for the Champions League; but also trim Lyon’s chances of getting into the Champions League qualifying stage.

Fixtures for the team in relegation battles
May 4, 2019
Bordeaux vs Angers
Guingamp vs Caen

May 5, 2019
Montpellier vs Amiens
Nantes vs Dijon
Toulouse vs Rennes
Monaco vs Saint-Etienne 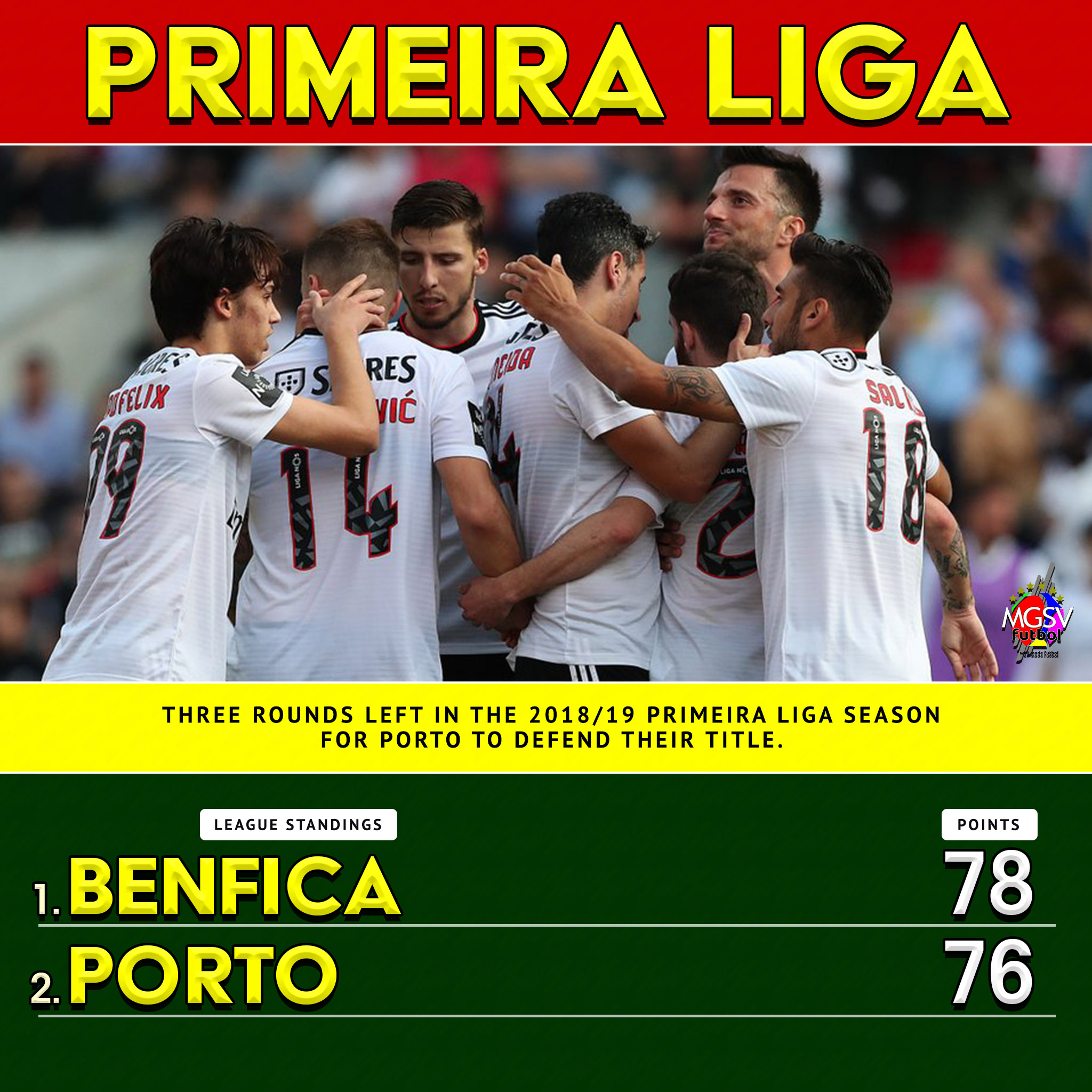 As things stand in the Portuguese title race.
Three games left in the season and Porto is in need of outside help to defend the league title after being held to a ‘2-2’ draw against Rio Ave, while Benfica deservingly took top spot in the league after coming from a goal down to win (4-1) at Braga.

May 4, 2019
Benfica vs Portimonense
Porto vs Aves 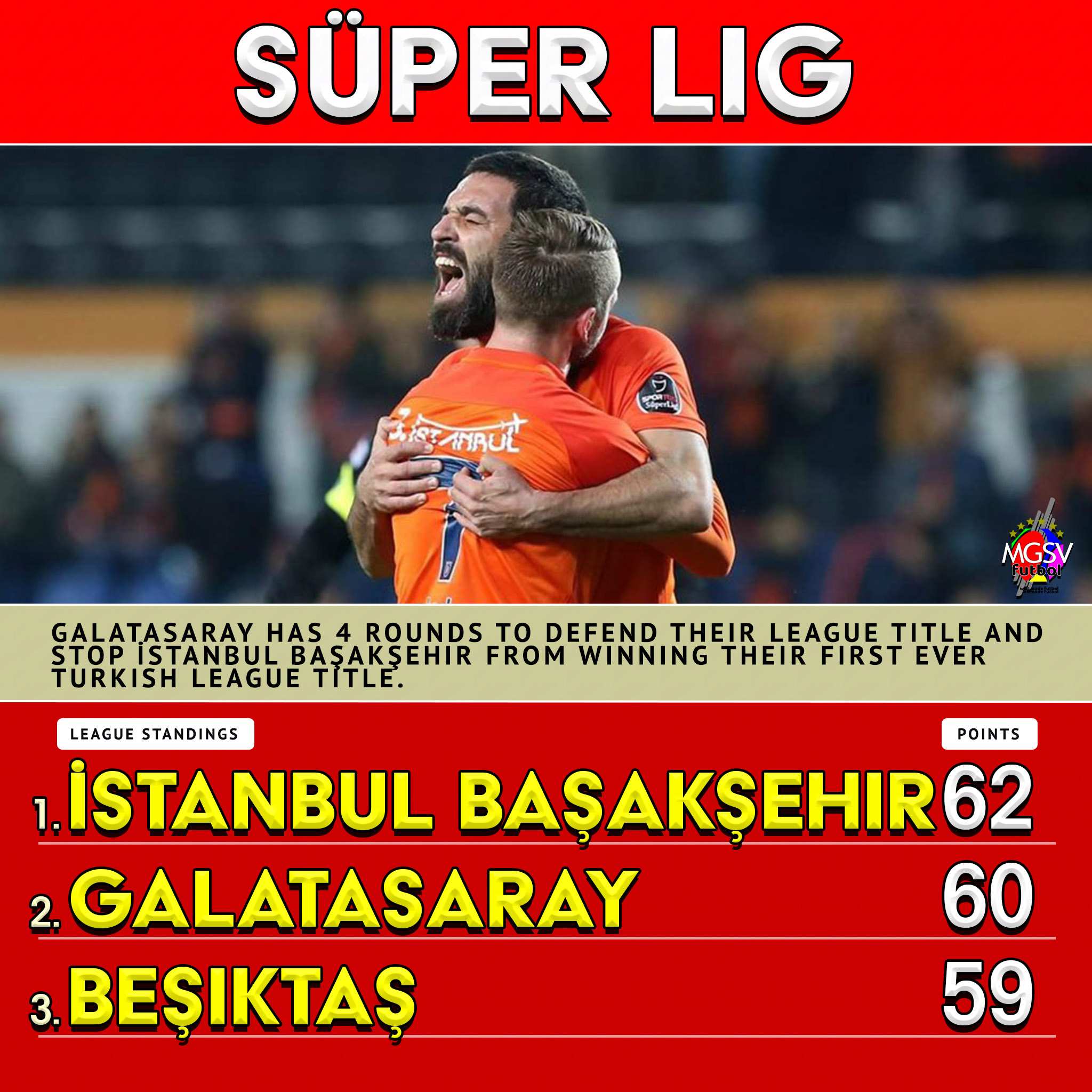 May 3, 2019
Sivasspor vs Istanbul Basksehir