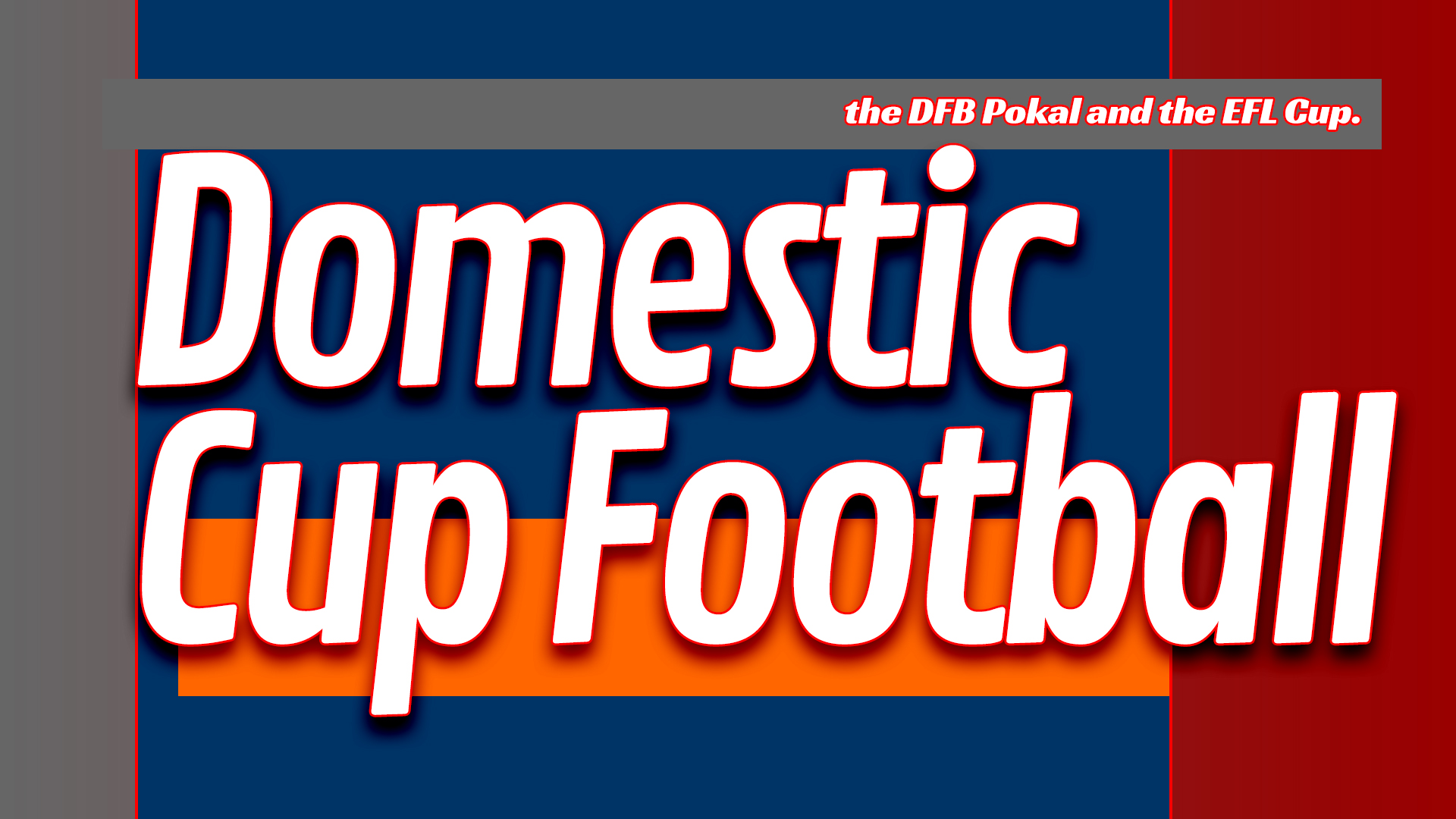 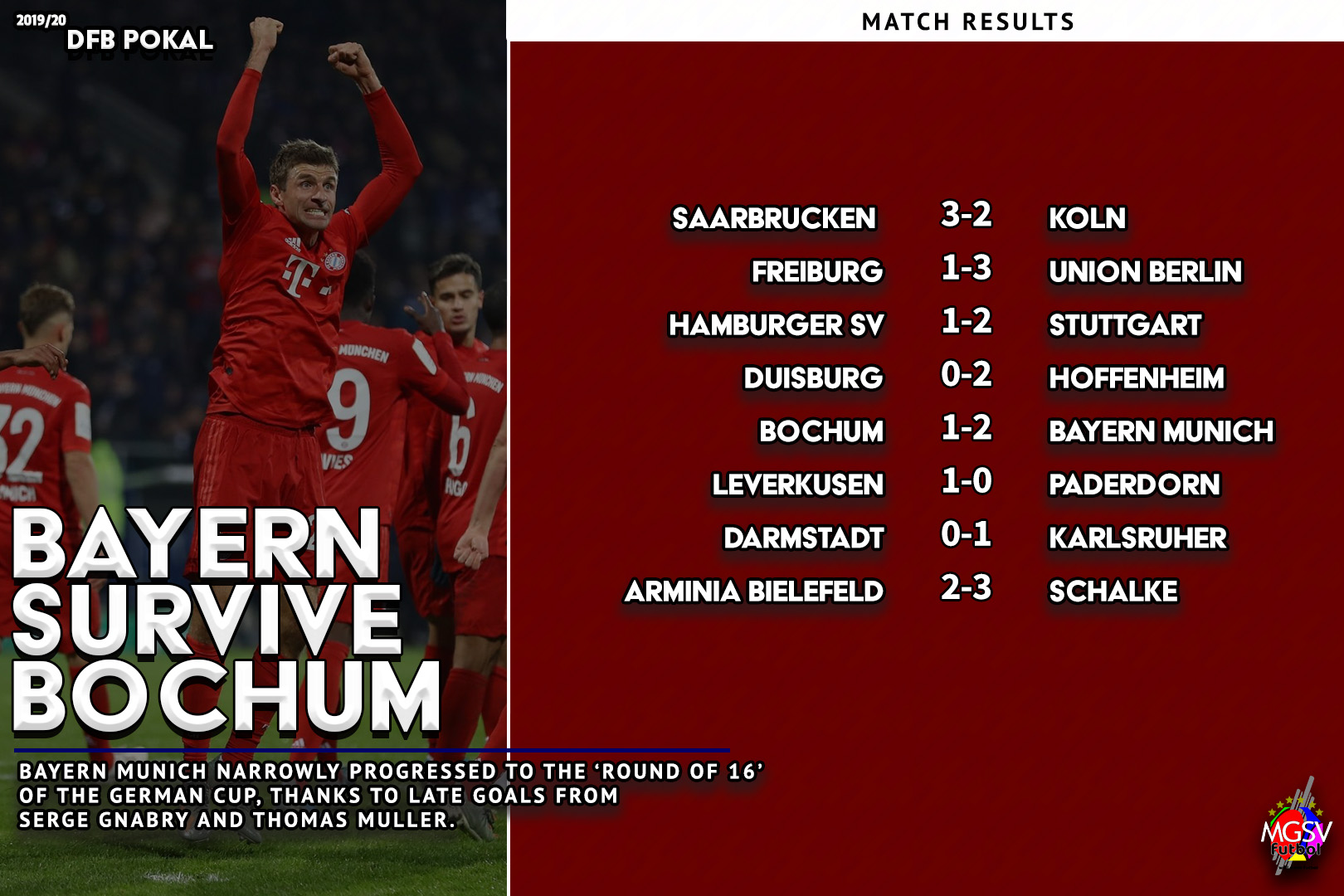 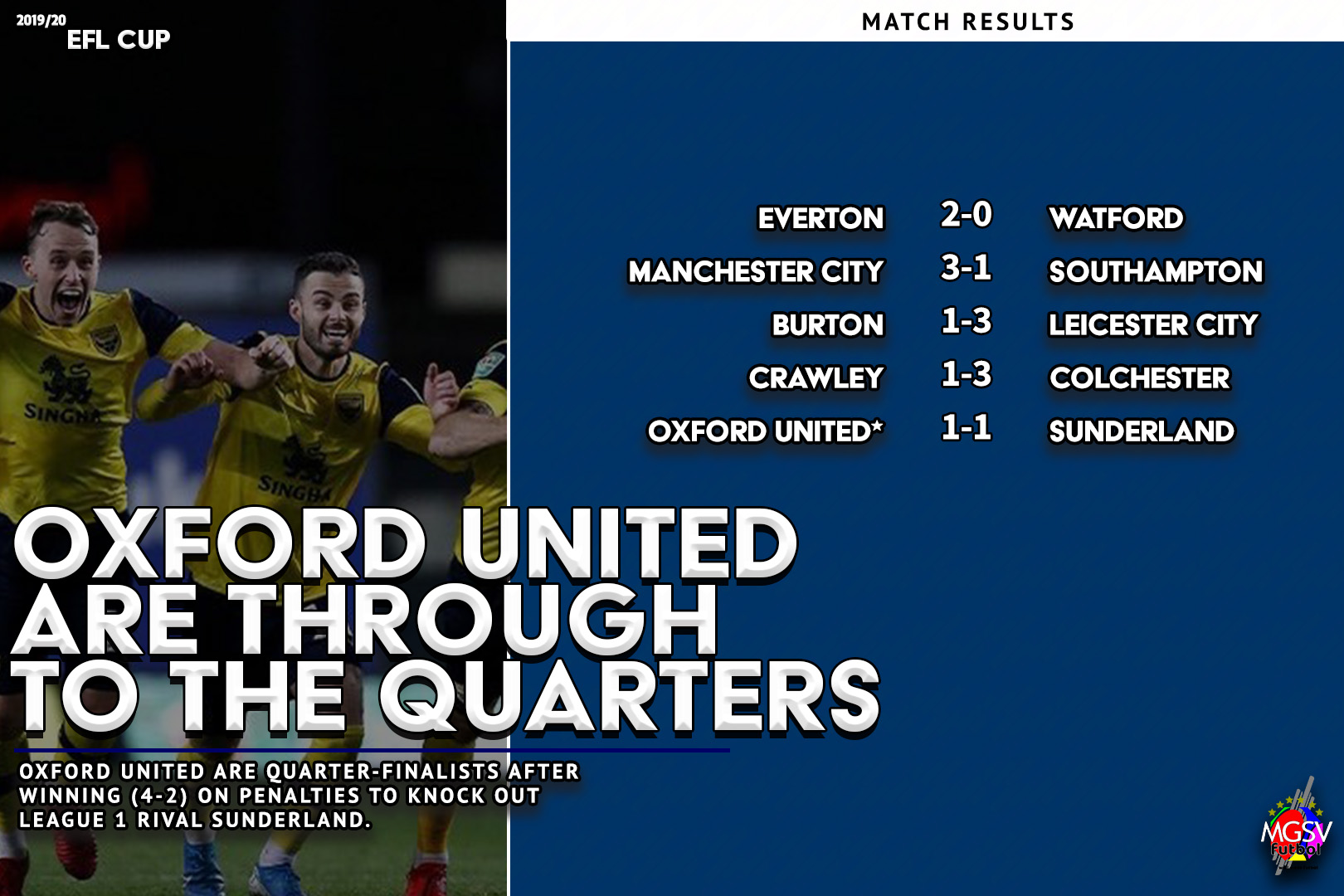 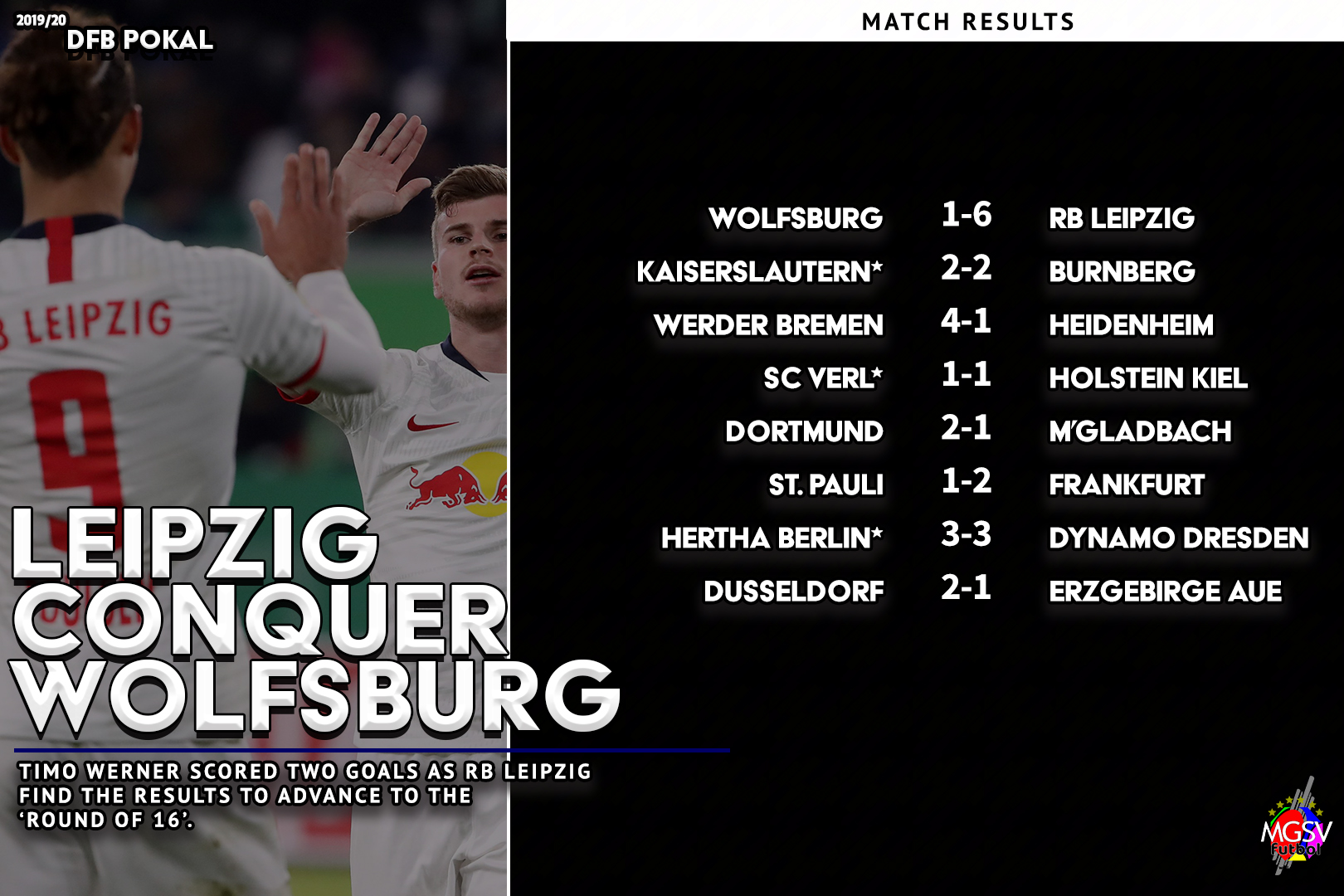 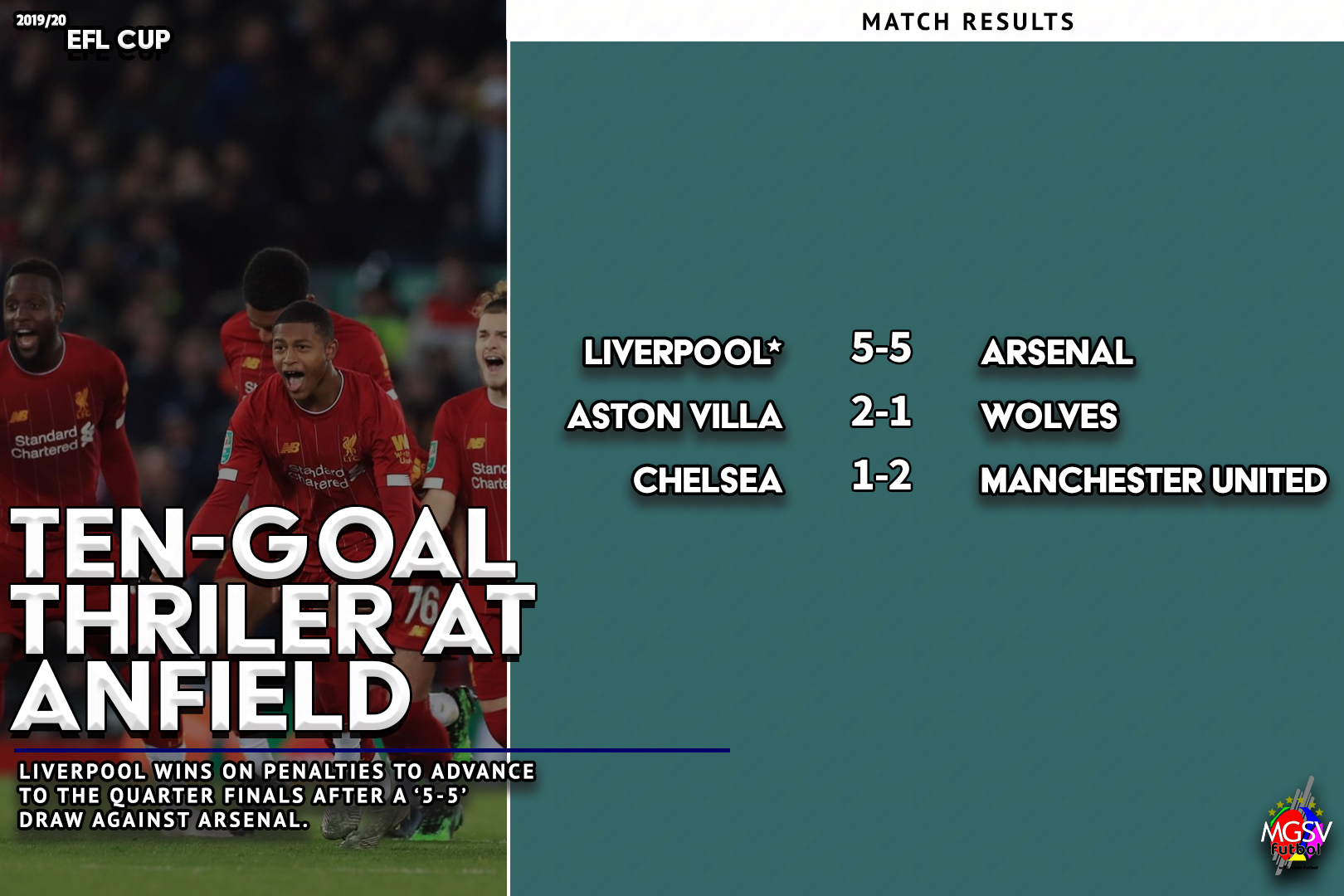 EFL CUP
Mason Holgate and Richarlison delivered the goals for Everton to knockout a Watford side that is finding it hard to win games.

We expected worse for Southampton. Manchester City does the expected and knock-out Southampton at the Etihad Stadium.

Leicester City flies high and moves on to the next round through a comfortable win at Burton.

Sunderland scored in the 78th-minute to send the game into extra-time but lost in the penalty kick-off against Oxford United.

Arsenal loses a 5-4 lead at the death of the match to lose 5-4 on penalties against Liverpool.
Divorck Origi scored in the 4th-minute of the additional time to send the match to penalties
It was a game that you couldn’t take your eyes off from start to finish. Lots of goals and spectacular strikes.

Ahmed El Mohamady restored Aston Villa’s lead in the 57th-minute to see his side beat Wolves 2-1 at Villa Park.

Marcus Rashford bang in a freekick to hand Manchester United a rare victory at Stamford Bridge against Chelsea.

DFB-POKAL
Saarbrucken scored in the 90th-minute to regain the lead and eliminated FC Koln.
Koln had come from two goals down to tie the match but couldn’t avoid defeat to fourth-tier Saarbrucken.

It isn’t the result you’d expect when you look at where the teams are in the current Bundesliga standings.
Two late goals from Robert Andrich and Christian Genter handed Union Berlin a victory to eliminate Freiburg. “

It took Hamadi Al Ghaddioui about 3 minutes to score the game-winning goal for Stuttgart to beat Hamburger in the extra time.
Al Ghaddiou came off the bench in the 110th-minute and scored in the to put Stuttgart ‘2-1’ up in the 113th-minute.”

Close contest but Hoffenheim comes out on top after getting two goals in the second-half to beat Duisburg.

Bayern Munich need late goals to avoid an upset against Bochum.
In the end, it was Thomas Muller’s goal against a Bochum side that had been reduced to 10-men that saved Bayern Munich playing an additional 30 minutes of the match. “

Kaiserslautern, SC Veerl, and Hertha Berlin had to go through penalty-kickoffs to advance to the Round of 16.

Five goals were scored in the first half in the ‘Werder Bremen vs Heidenheim’ match. Werder Bremen got 4 of the 5 goals.

Julian Brandt scored a brace to see Borussia Dortmund through after Marcus Thuram opened the scoring in the match to hand Borussia Monchengladbach a lead in Dortmund.

On to the Round of 16 if the DFB Pokal
Eleven teams from the top flight make up the final 16 of the DFB-Pokal.