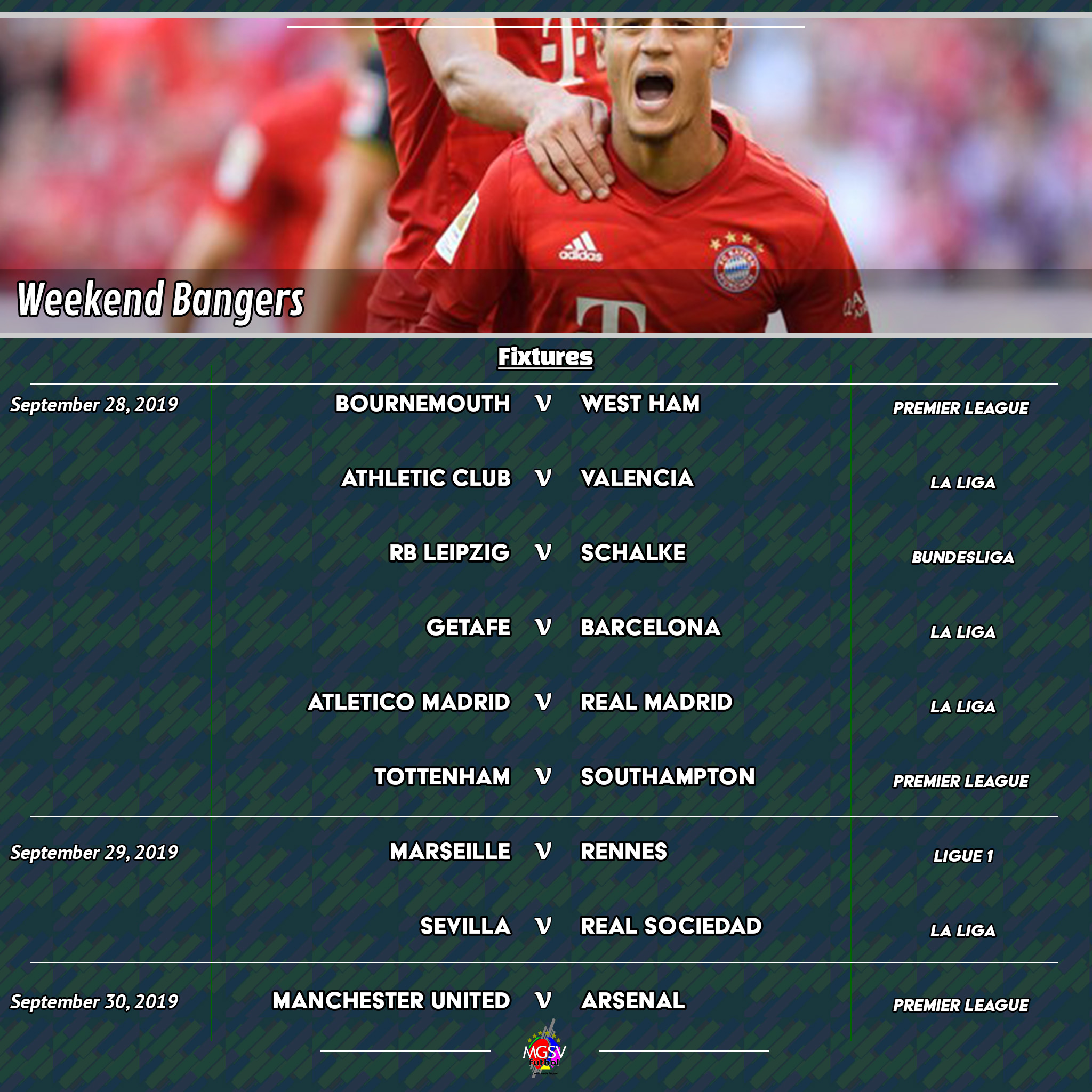 September 28, 2019
Bournemouth vs West Ham (English Premier League)
Two teams that are in a position to go above pre-season expectations. Bournemouth and West Ham are currently outside the ‘top four’ in the Premier League standings. A positive result for either side could see them finish the round in the top four.

Athletic Club vs Valencia (Spanish La Liga)
Athletic Club is the other unbeaten club in the La Liga after 6 rounds. After losing the top spot position for failing to get a win at Leganes, it will be Athletic Club’s goal to get another home victory against a struggling Valencia side could see them at the top of the league standings after the completion of the 7th round of the 2019/20 La Liga matches.

RB Leipzig vs Schalke (German Bundesliga)
RB Leipzig has a lead to protect while Schalke has a place in the ‘top-four’ to get. Three points separate Schalke from league leaders RB Leipzig. With Bayern Munich lurking around, RB Leipzig will be planning on extending their unbeaten start to the season to tighten their grip on first place. Schalke has what it takes to ask hard questions.

Getafe vs Barcelona (Spanish La Liga)
Barcelona is yet to win an away fixture in the league. A trip to Getafe without Lionel Messi will be another test. The difference between the two sides in the league standings is just 3 points.

Tottenham vs Southampton (English Premier League)
Tottenham has gone three competitive matches without a victory. Their last league match was a defeat to Leicester City, and their last competitive fixture saw them getting knocked out of the League Cup by Colchester. Tottenham will need a home victory against Southampton to bring back the ‘feel-good’ mood to the club. Only a point separates the two sides in the current league standings.

Sevilla vs Real Sociedad (French La Liga)
Real Sociedad might be taking advantage of the results of the ‘Madrid Derby’ if they can seal an away win against Sevilla. After blowing a 2-goal lead to suffer defeat to Eibar in the last round of matches, Sevilla is desperate to make things right at home.

September 30, 2019
Manchester United vs Arsenal (English Premier League)
Manchester United will welcome Arsenal on Monday. There was a time when the two sides contended for titles. Arsenal hasn’t had the best results at Old Trafford, but with their attacking threat and the form that Manchester United has been in recent matches, Arsenal goes to Manchester as the favorite.