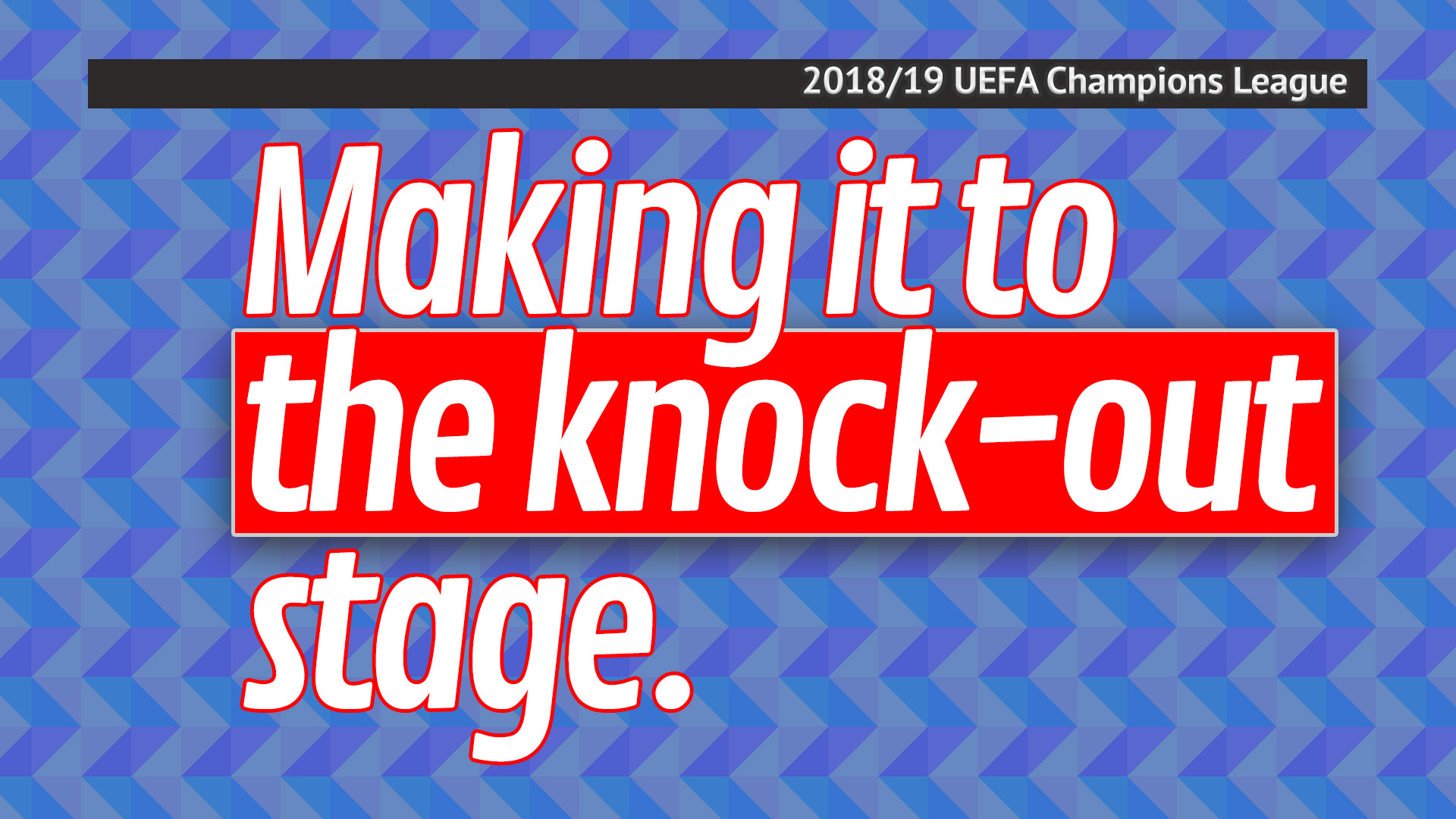 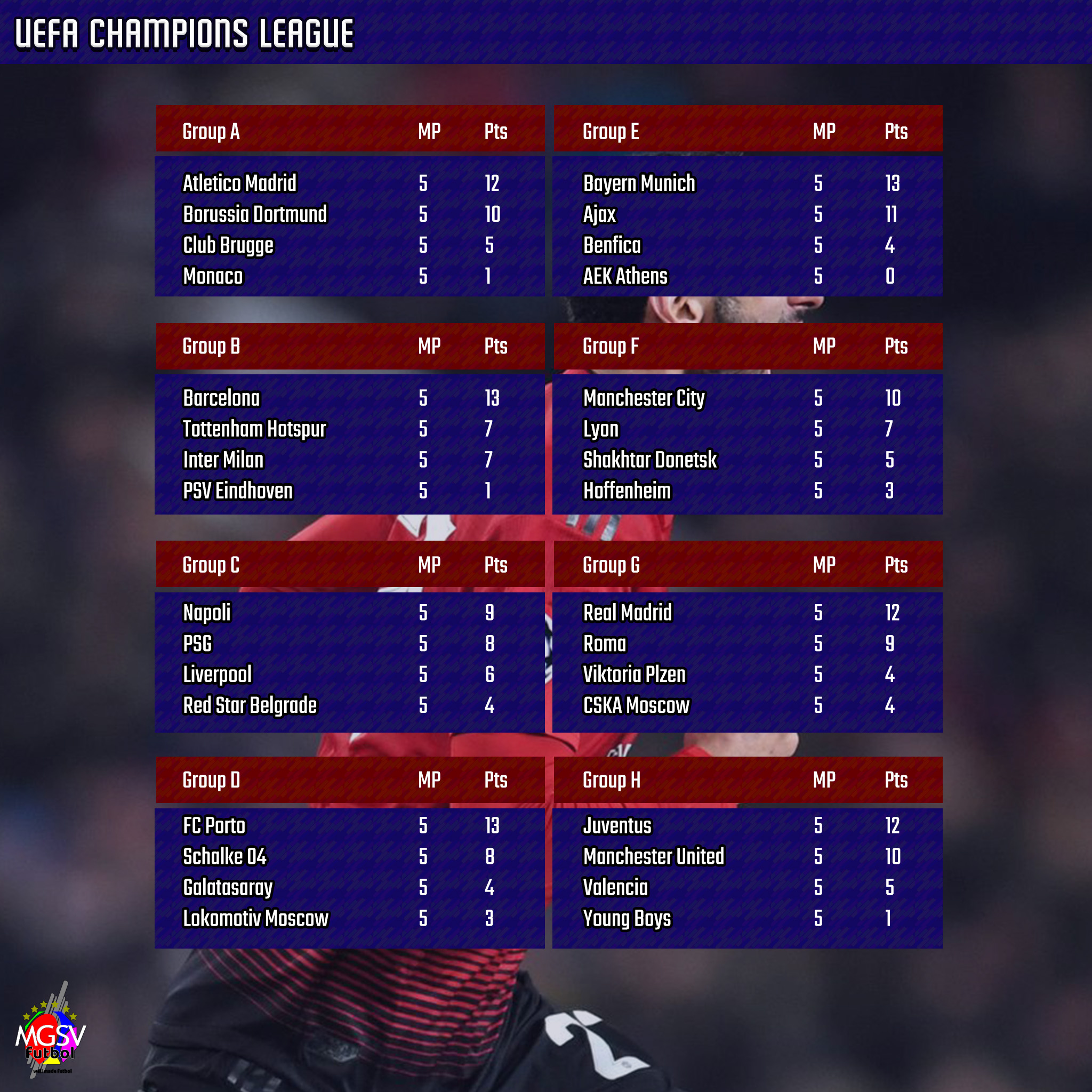 All the teams from the Premier League and the Italian Serie A remain alive in the Champions League.

Despite domestic dominance, PSV Eindhoven and eliminated from the competition, while Ajax moves on to the knock-out stage for the first time since 2005/06 season and with a possibility of topping a group that includes Bayern Munich.

Russia won’t be represented in the knock-out round as both Moscow teams (Lokomotiv and CSKA) can at best fall into the UEFA Europa League.

Porto wins their group and Benfica gets a place in Europa League Round of 32.

Monaco, PSV Eindhoven, AEK Athens, Young Boys are done with European Club competition for the year and can focus on domestic football to get a return ticket for next season. 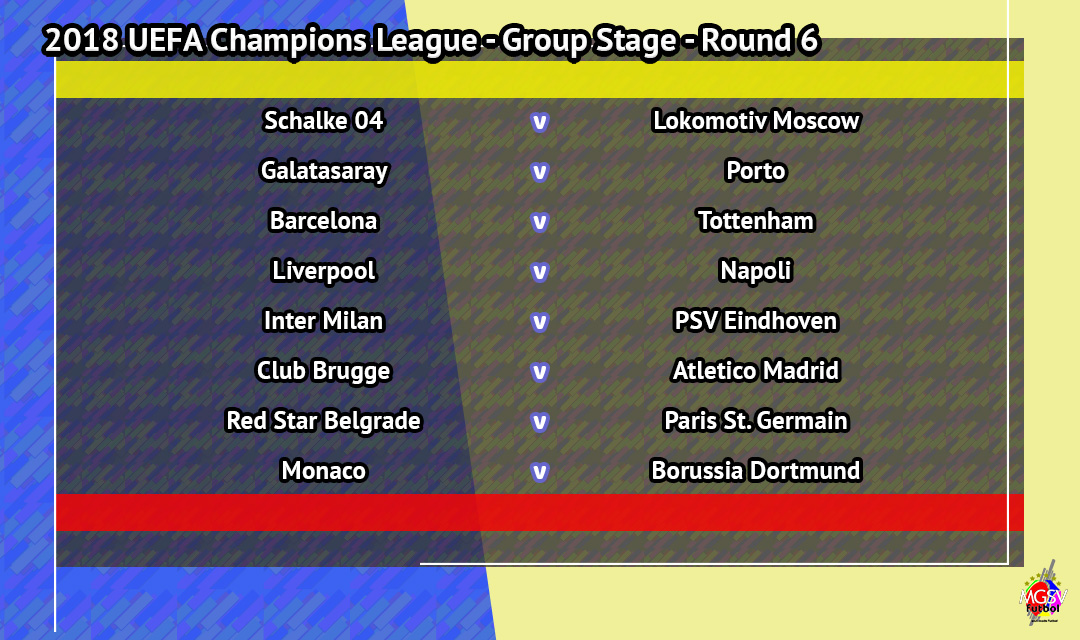 Group A
Atletico Madrid wins the Group with a win against Club Brugge. A draw could deny Atletico from winning ‘Group A’ if Borussia Dortmund comes out of Monaco with a win.

Group B
The task for Tottenham is to win at the Camp Nou against Barcelona or hope that an eliminated PSV Eindhoven can shock Inter Milan at the San Siro. 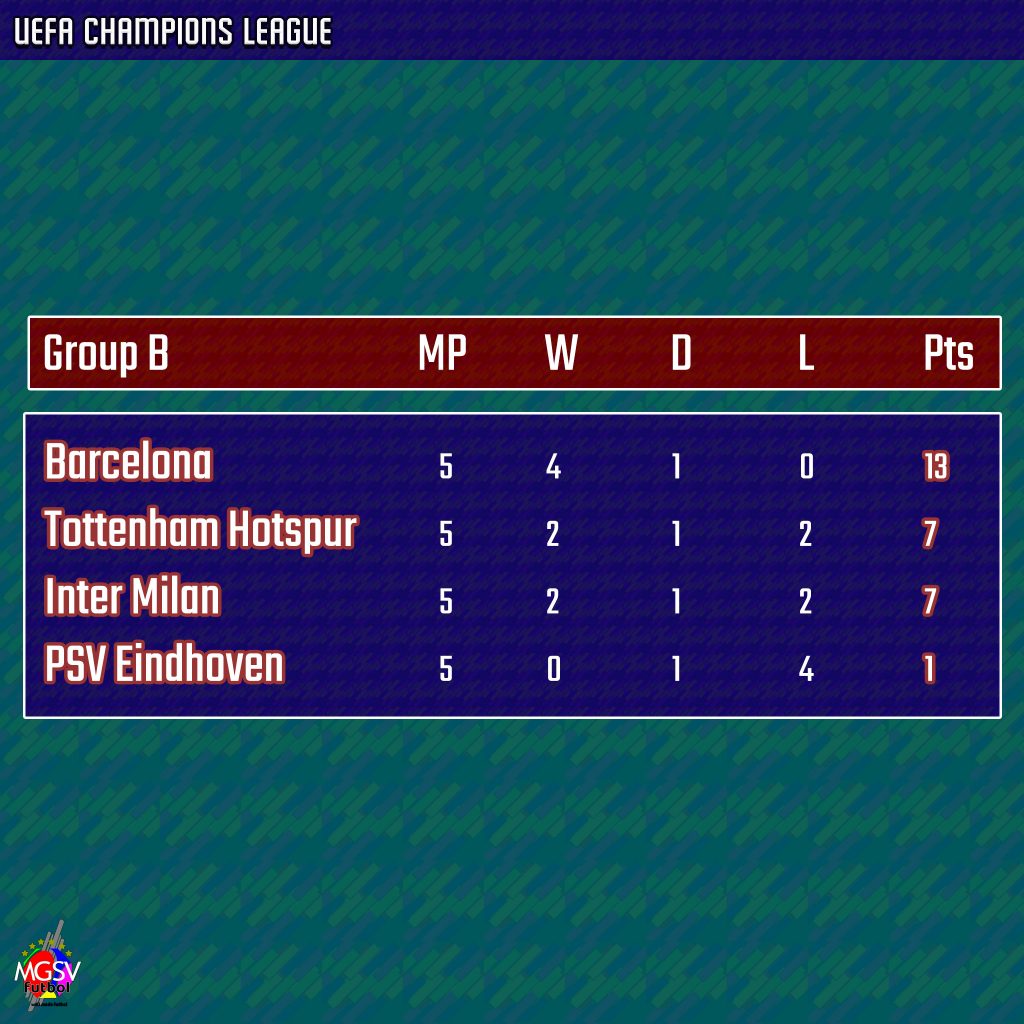 Group C
The possibility of three teams ending up with 9 points on the final day remains in Group C.
PSG will need a victory against Red Star Belgrade to guarantee a place in the Round of 16 after getting their revenge on Liverpool.
Red Star Belgrade will be looking to get the three points that could see them in the Europa League should Napoli beat Liverpool.
Liverpool will need the backing of Anfield to get a victory against a Napoli side that is unbeaten in the group. 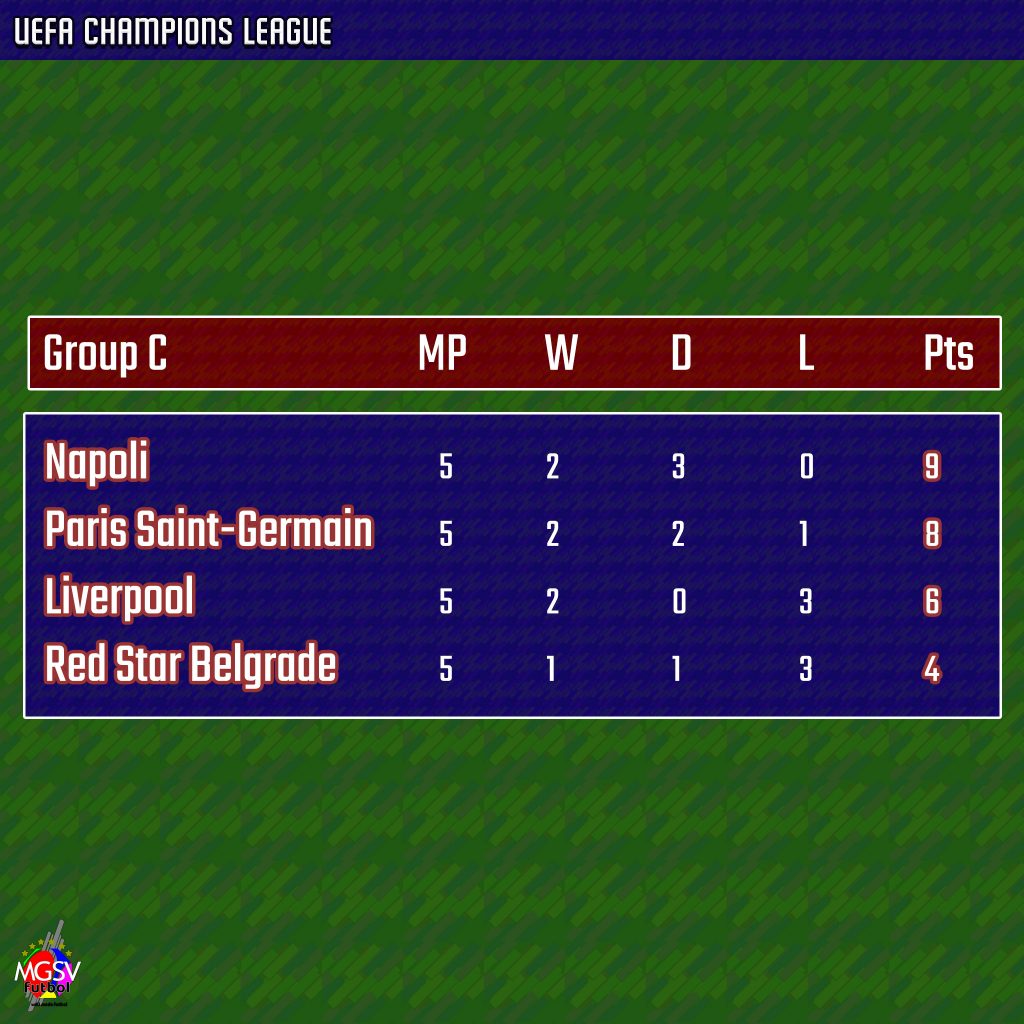 Group D
Porto wins the group and despite Schalke’s struggles in the Bundesliga, they also move on to the next round.
Galatasaray and Lokomotiv Moscow will be fighting for a place in the Europa League in their final group match against their groupmates who have clinched ‘round of 16’ qualification 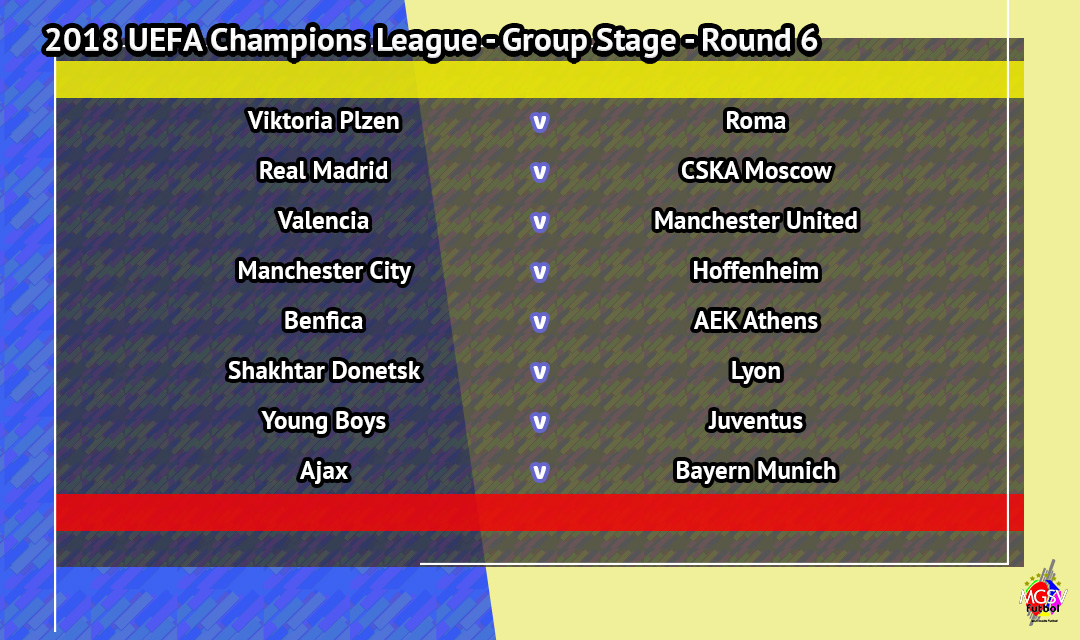 Group E
Ajax will welcome Bayern as they figure out which side finish the round as the group winner. A point from a draw is good enough for Bayern to win the group. Can home support help Ajax do the improbable and finish as winners of Group E?

Group F
Manchester City needs a point to guarantee they will be group winners. 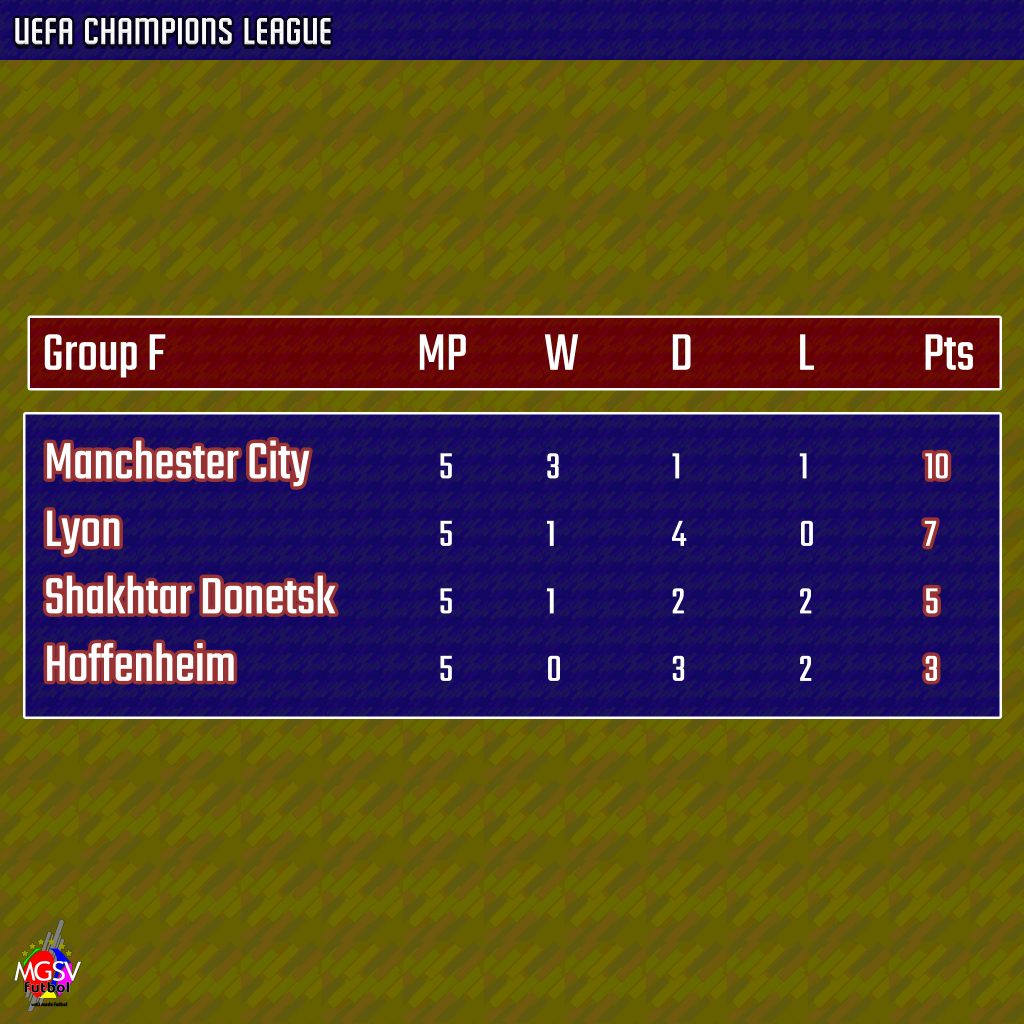 The result keeps Shakhtar Donetsk and Lyon in a battle for the final ticket to the ‘Round of 16’ from Group F. The good news for both teams is the fact that they will have their destiny in their hands when they meet in the final match of the round.
Should Hoffenheim get a win at the Etihad Stadium against Manchester City, they would hope that Lyon will do them a favor by beating Shakhtar Donetsk. The combination of such results will help Hoffenheim continue their journey in European competition through the Europa League.

Group G
Real Madrid wins at the group and moves up with Roma. The losers in the group would be discovered after the final round.

Group H
The group winners will be decided on the final day. Juventus will be needing to beat Young Boys to secure the top spot if Manchester United gets a win at Valencia.