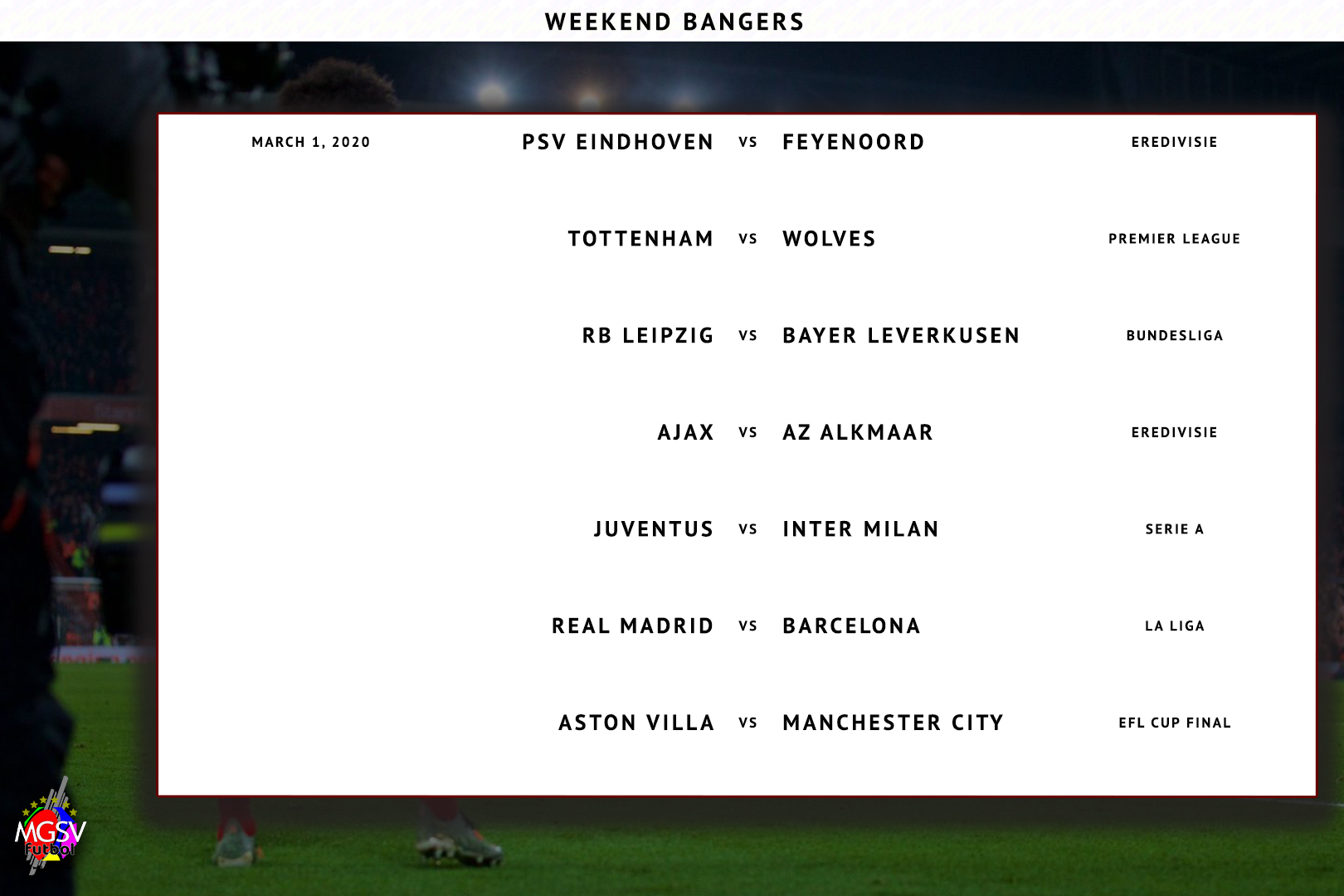 It is a battle at the top of the Dutch Eredivisie on Sunday.
‘Third vs Fourth’ and then ‘First vs Second’

PSV Eindhoven vs Feyenoord (Dutch Eredivisie)
In their last meeting, Steven Berghuis scored a hat trick for Feyenoord to win ‘3-1’ at home.
With a match in hand, a win in Eindhoven for Feyenoord will increase the gap in points between the two sides to 4 points. A win could potentially see Feyenoord cut the gap between themselves and the top two teams down to a point.

After a shaky restart after midseason break, PSV Eindhoven will be chasing their fourth consecutive victory in the Eredivisie campaign when they host Feyenoord.
Feyenoord has the fewest league defeats (3).

Ajax vs AZ Alkmaar (Dutch Eredivisie)
The last time the two teams met, Myron Boadi scored the winner in the 90th-minute for hand AZ Alkmaar a home victory against Ajax.
Ajax must return the favor on the home grounds or risk losing the current three point lead in their title defense season.

Tottenham must repeat the success in the reversed fixture reduce the risk of falling behind.
The last time the two met in a league match, Jan Vertonghen won it in injury time for Tottneham to leave Wolverhampton with three points from a ‘2-1’ victory.
As things stand for Tottenham, a third defeat in a row for Tottenham will drop them two points behind Wolves.

RB Leipzig vs Bayer Leverkusen (German Bundesliga)
To keep the pressure of Bayern Munich, RB Leipzig has to stall Bayer Leverkusen’s plan of entering the top four. A repeat of the ‘1-1’ draw they had in their earlier meeting won’t be enough for either side to achieve their targeted objectives in this round.

This is one of the few matches in Serie A that is expected to give Juventus a challenge.
Inter Milan are moving away from being contenders to being pretenders in the title race as things stand.
Inter Milan must win (or pick up points) in Turin to edge their way back into the title race.

The last meeting for the two was a win for Juventus at the San Siro. Gonzalo Higuain was the difference maker with the match winning goal for Juventus. It ended ‘Inter Milan 1-2 Juventus’.

Real Madrid vs Barcelona (Spanish La Liga) – El Clasico
Barcelona took the pole position in the title race at the end of the latest round.
It was a goalless draw at the Camp Nou in the first half of the season.

Real Madrid will need an El Clasico win to return to the top spot. A defeat will drag them 5 points away from the top and won’t help in the ‘head-to-head’ record. Barcelona needs a draw to stay top and a win to run 5 points clear.

Will the EFL Cup title make a move to Birmingham? Or will it continue to make Manchester it’s home?
The title has stayed in Manchester since 2016.
It will be a hattrick of EFL Cup final success for Manchester City if they do what will be expected and win the final against Aston Villa.