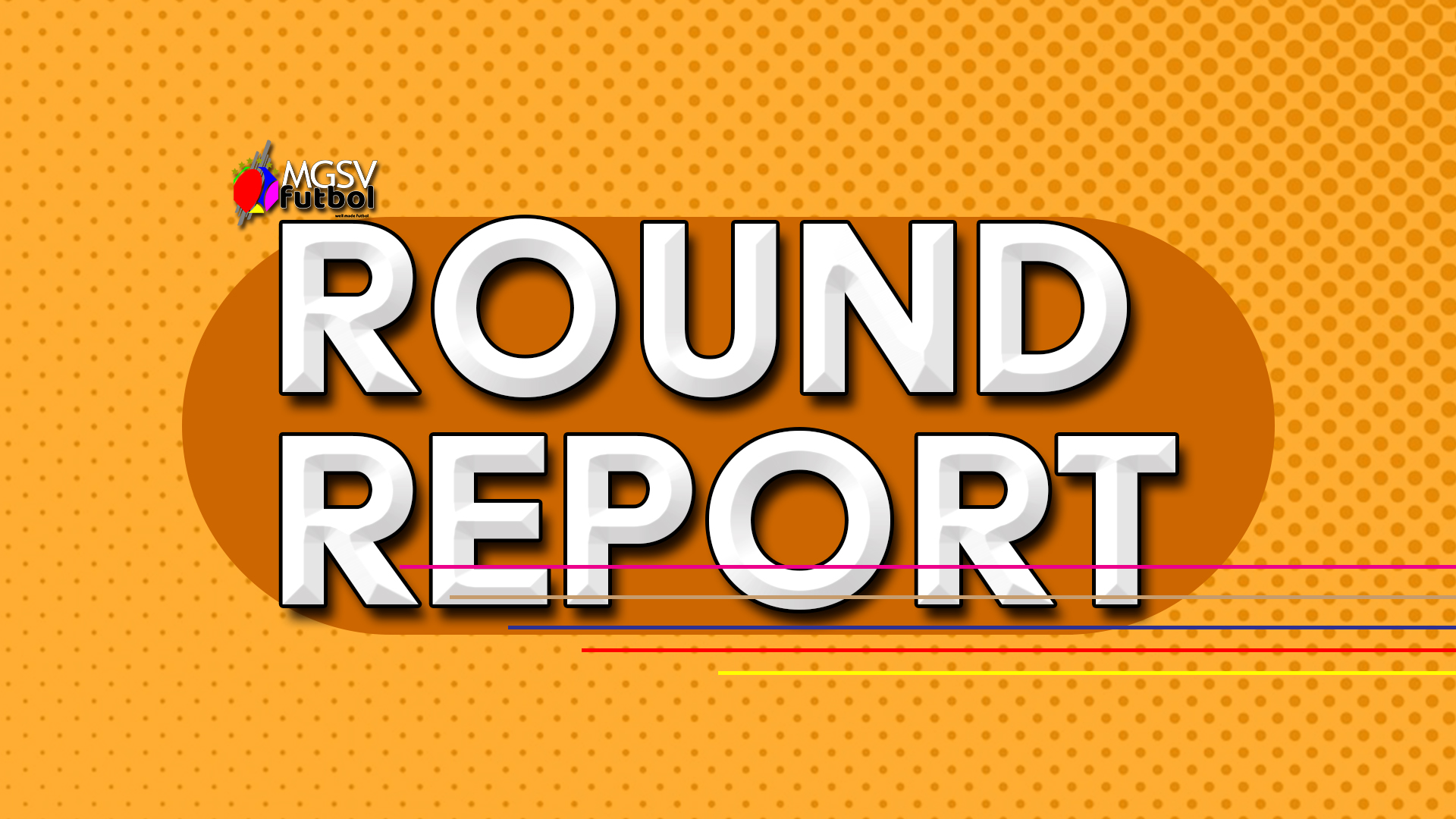 (+ 3) points for both Real Madrid and Barcelona.

The gap is maintained between Lille and PSG.
Lyon dropped two points at home.

Leverkusen kept the top spot.
2 goals after the 90th-minute completed a hatrick for Lars Stindl and also saw Monchengladbach come from 2 goals down to pick up a point in Frankfurt.
Hertha Berlin are held by Mainz to a goalless draw.
Sasa Kalajdzic scored two late goals to get Stutgart a 2-2 draw against Union Berlin.
Dortmund recovered from heavy defeat at home in the last round with a narrow win against away to Werder Bremen.
28 straight winless games in the Bundesliga for Schalke.

A back-to-back defeat in the league for Chelsea and an end of successive defeats for Wolves.
More points dropped by Manchester City.
Arsenal are now 6 league games without a win in the Premier League.
Leeds United hammered Newcastle United.
Leicester City and Southmapton dropped points.
Liverpool moved top of the Premier League with a late winner against Tottenham.
It was defeat no.12 in 13 matches for Sheffield united.

Udinese are held at home to a goalless draw by Crotone.
The Inzaghi brothers managed their teams to a 1-1 draw.
AC Milan’s lead in the Serie A narrows to a point.
Juventus shared the points with Atalanta after a 1-1 draw.

In the Premier League,
Leicester City and Southampton failed to get the maximum points that would have allowed them to take full advantage of the ‘Liverpool vs Tottenham’ fixture. Leicester were beaten at home by Everton, while Southampton managed to pick up a point from a 1-1 draw with Arsenal.

Pedro Neto scored in the final minutes of added time to see Wolves complete a comeback from a goal down to beat Chelsea 2-1. Back-to-back defeat in the Premier League for Chelsea and an end of successive defeats for Wolves.

More points dropped by Manchester City.
A 1-1 draw at home against relegation-zoned West Brom marked a consecutive draw in the Premier League for Manchester City.
Five wins from 12 matches isn’t what many would have expected from a team that was marked as the main title contender.

Pierre-Emerick Aubameyangs scored the equalizing goal in the 52nd-minute to give Arsenal a point at home against Southampton. Arsenal are now 6 league games without a win.

Leeds ended a consecutive league defeat by scoring three goals in the final quarter of regulation time to separate themselves from a 2-2 draw with Newcastle to secure a 5-2 win.

Richarlison and mason Holgate gave Everton the win at Leicester.

The points were shared in an evenly contested match between Fulham and Brighton.

Tottenham failed to take advantage of a few counter attacking chances that they had to win at Anfield. In the end, Roberto Firmino headed in a goal in the dying minutes of the match for Liverpool to beat Tottenham and move three points clear at the top of the league.

A 10-man Crystal Palace picked up a point away against West Ham.

Aston Villa were held to a point by Burnley.

It was defeat no.12 in 13 matches for Sheffield united. A 3-2 loss at home to Manchester United kept Sheffield at the bottom of the Premier League standings.

In the German Bundesliga
The stage is set-up in the Bundesliga for 1st vs 2nd. Bayer Leverkusen vs Bayern Munich will meet this weekend.

Monchengladbach’s last three league games have all been a draw. Frankfurt are 9 straight league matches without a win (2L 7D).
Andre Silva scored two to get Eintracht Frankfurt to take control of the game within 10 minutes after Lars Stindl scored the match opening the scoring for the game to hand Monchengladbach the lead. Aymen Barkok gave Frankfurt what many thought would be the insurance goal for their three points a few minutes later. But two goals after the 90th-minute completed a hatrick for Lars Stindl and also saw Monchengladbach come from 2 goals down to pick up a point in Frankfurt.

Goalless in Berlin.
Hertha Berlin are held by Mainz to a goalless draw in the Bundesliga. .

Dortmund recovered from heavy defeat at home in the last round with a narrow win against away to Werder Bremen. Marco Reus’ goal gave Dortmund the three points against Werder Bremen.

Will it end at 28, Schalke’s winless run in the Bundesliga is extended after a 2-0 defeat at home against Freiburg. It’s 28 Bundesliga games without a win for Schalke. Up next is a home game against newly promoted Arminia Bielefeld.

It’s consecutive matches of scoring 4 goals for Leverkusen.
Ahead of their game with Bayern Munich, Bayer Leverkusen picked up a 4-0 win in Cologna to keep top spot in the league.

Augsburg won their first match in six games after a narrow away victory against Arminia Bielefeld.

Robert Lewandowski scored two goals to get Bayern Munich from the losing end of the score to a win at home against Wolfsburg.

Yussuf Poulsen scored the only goal of the match in the 60th minute. RB Leipzig took all three points at Hoffenheim.

In the Italian Serie A,
Udinese were held at home to a goalless draw by Crotone.

The Inzaghi brothers managed their teams to a 1-1 draw. In other words, recently promoted Benevento got a point for Lazio.

Cristiano Ronaldo missed a game winning chance from the penalty spot. Juventus shared the points with Atalanta after a 1-1 draw.

Dusan Vlahovic scored from the spot to cancel Sassuolo’s lead but it wasn’t enough to stop Fiorentina from going seven league games without a win.

AC Milan dropped points in consecutive games by coming from behind to get a late equalizer in 2-2 draw. Their lead at the top of the Serie A standings has been narrowed down to a point after a draw at Genoa.

Sassuolo won their first league match in 2 games after a 2-1 win on the road against Hellas Verona.
Inter Mialn moved a point from the top of the league after a 1-0 win at home against Napoli.

Musa Barrow could have scored a brace, completed the comeback and won the match for Bologna if he had converted a late penalty kick into a goal. Bologna come from 2 goals down to get a draw against Spezia.

Andrea Belotti scored to pull one back for Torino but his side went down 3-1 in Rome. Roma made it a consecutive win in Serie A with a 3-1 victory against a 10-man Torino side. Torino had to play with a numerical disadvantage from the 15th minute; when Wilfried Singo was sent off for accumulation of yellow cards.

In the French Ligue 1,
Lille and Paris St. Germain keep top spot after picking up 3 points from a 2-0 win in their respective matches.
Lille had to win away at Dijon, while Paris St. Germain took care of the business at home against Lorient.

A 10-man Nice found the win against Nimes with two late goals in the final 10 minutes of the match.

Reims moved a point from Nimes in the standings after a win 5-goal thriller.

Yvan Noupa scored the winner against Bordeaux in the 75th minute to see Saint-Etienne win their first game in 12 league matches.

Lyon conceded late against a 10-man Brest side to drop two points in a 2-2 draw.

With a match in hand, Lens picked up three points from a ‘3-0’ win at Monaco to move a point above Monaco in the league standings.

Rennes made it a back-to-back win after 8 games without a win. They handed a 2-1 defeat to Marseille. The result ended Marseille’s winning streak in the league at 4 games.

In the Spanish La Liga,

Both Real Madrid and Barcelona were winners in their midweek fixture.
Real Madrid beats a 10-man Athletic Club in the Spanish La Liga.

Barcelona beat the current league leaders. Jordi Alba and Frenkie De Jong provided the goals to cancel out the lead Willian Jose gave Real Sociedad. Barcelona took a 2-1 lead into the break and kept it to the final whistle.