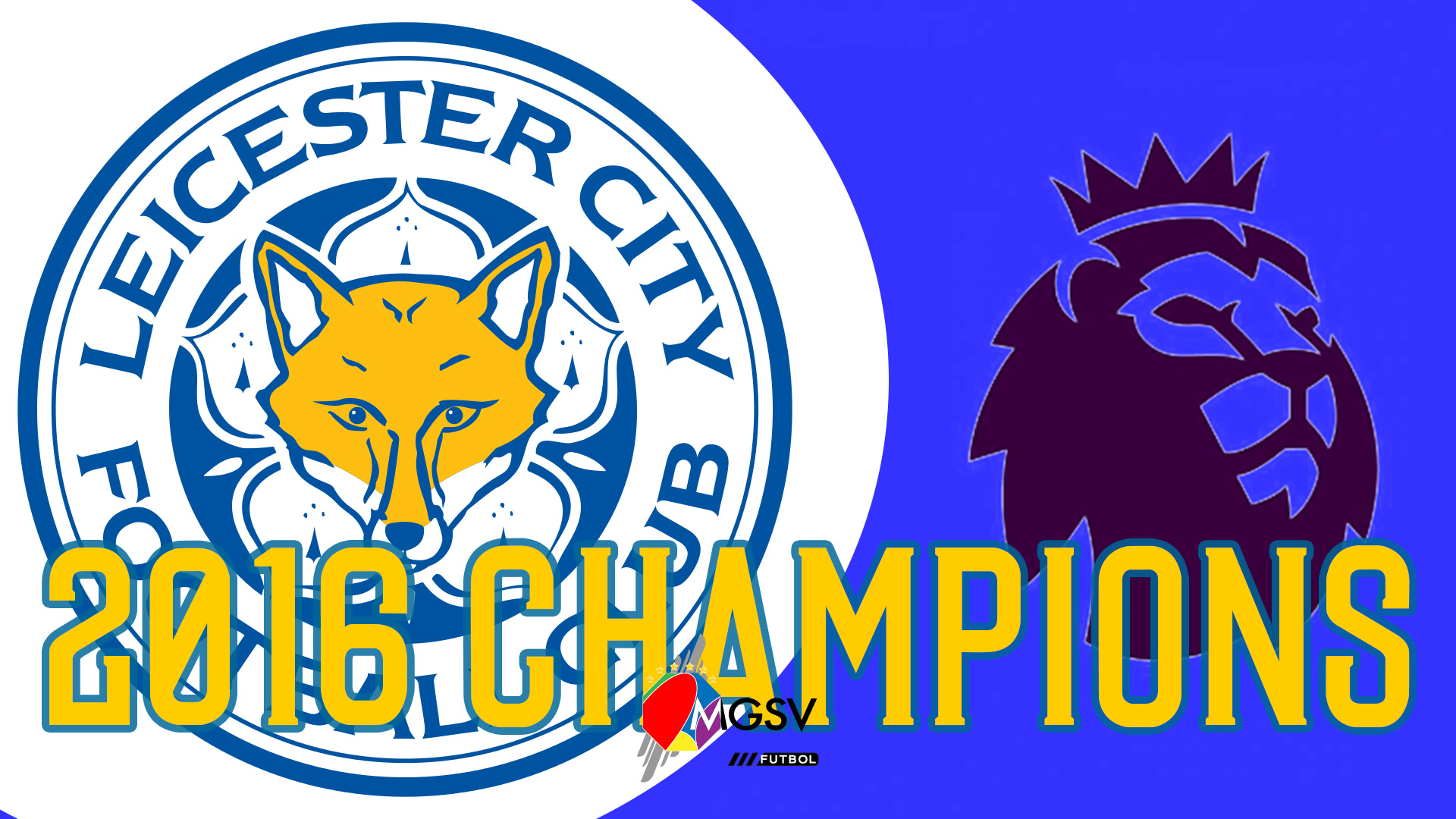 This is the season legends were made.
Another Schmeichel gets a premier league medal playing in goal. Kasper Schmeichel won his first title at the age of 29, just like his father Peter Schmeichel did.

From the manager to the players, no one expected winners medal for anyone on Leicester City’s team. Not a single player on the team would have been considered a world star player. These are relatively unknown men to the football world, and together they’ve written their name into football history.

Leicester City FC is the Barclays Premier League Champions for the first time in history. No one thought it was going to happen, but it did. With starting odds of 5000/1, this was a sure thing that the team from Leicester would be back to Championship by the end of the 2015/16 Premier League season.

From 2008 to present, Leicester City FC have written a story of a football team that went from League One to the Premier League, and won the title on every level. A very impressive achievement.

Just a season ago, Leicester City was finding it hard to adjust to the Premier League as a newly promoted team. They were looking directly at a quick return back into the Championship. They had gained promotion with Burnley and Queens Park Rangers, and it was looking like they were going back down together.

Nigel Pearson, the manager that brought the team into the Premier League had to find a way to successfully get his men to stay in the top flight of British football.

Pearson’s success in keeping the team in the Premier League made it a shock for the football world when he was replaced with Claudio Ranieri. You were not alone if you thought this was an obvious downgrade.

After 38 rounds of the Barclays Premier League season, Leicester City sat on top of the other 19 teams in contention with a (+32) goal difference (outshooting opponent 68-36), 23 Wins, 12 Draws, and 3 Losses. They had 81 points total, lowest amongst the top 5 domestic leagues in Europe.

They started their season very strong. For their first six matches of the league, they remained undefeated.

There were only 3 occasions that Leicester failed to come out of a match without a point. Their first lost in the season was a 5-2 home thrashing by Arsenal. That was the ‘I told you so” moment for many fans and pundits, who were predicting that Leicester will be back to their designated area on the league table when the plot thickens. Credit to Leicester, that home loss did not break the team morale. They bounced back and went on for a longer streak of undefeated matches (10). Then suffered an away loss to a Liverpool team that had been rejuvenated by Jurgen Klopp. After another 7 undefeated matches, they lost again to Arsenal, making Arsenal the only team to pull ‘a double’ over Leicester City in the 2015/16 season.

Their next five wins after their second defeat to Arsenal was by a 1-0 scoreline. They were efficient.

The Secret Formula
With 5000/1 odds of winning the league, Leicester City did not have the pressure of winning the league, but the pressure to stay in it. So finding themselves in a position to win the league title after the completion of half of the season, Leicester really had fulfilled their goal for the season. They were going against teams that were marked as favorites, and that must have relieved them of the pressure that ‘big teams’ deal with. The expectation to perform well in every match you play was not a burden for Leicester.

By January 20th, Leicester City was out of all Cup competitions. Hull City knocked them out of the Capital One Cup on October 27th, and Tottenham Hotspurs knocked them out of the FA Cup on January 20th. Only thing left on their plate was the Premier League
Can you win a league playing 4-4-2 in the modern era? Was is the formation or was it the players?
The big teams don’t use it, so it must not be effective in the modern game. Maybe this is what we all thought about the classic 4-4-2 formation.
Leicester City went through their campaign relying on a 4-4-2 formation. As we can see, it must have worked. Having the right players in the formation is more important than the formation. Leicester City had the right men for the job. They are had strength in all areas of the pitch. The team could play just as well with or without possession of the ball.

‘Strong’ and ‘Hardworking’ are two words would describe the Leicester City team.

The Month of February/ Stage Fright?
February 2016 was the season-defining month for Leicester City. They had three momentum killing matches lined up in February. It started off with Liverpool on February 2nd, then Manchester City four days after on February 6th and finishing a week later against Arsenal on February 14th.

Two of the three teams had won the first meeting, and the other team was a draw.
First meeting against Liverpool ended in a 1-0 loss. It was a goalless draw against Manchester City at home, and Arsenal gave Leicester their first loss of the season with a 5-2 home thrashing.

Like other situations during the season, Leicester took on February’s challenge. Their meeting with Liverpool ended in a 2-0 win. They got back the 3 points they’d giving away earlier in the season.

Leicester was still on top of the league table with 50 points when they traveled to Etihad to play one of the favorites, Manchester City. City was trailing 3 points behind at 47. A Manchester City win meant a new league leader, as Manchester City had a better goal difference. Playing Manchester City away and knowing what is at stake meant that Leicester would have to be on their best form to walk out of Manchester with a point.

And on their best form they were. Leicester City, inspired by Mahrez and their defensive four, pulled a 3-1 win from Etihad. That win place them 6 points clear on top of the league.

This team had no stage fright.
Then there was Arsenal. The team that handed them their biggest league defeat of the season and their only home defeat in the same match. Traveling to Emirates Stadium to play Arsenal was always thought of to be a difficult match for Leicester, but after beating Manchester City away, going to Arsenal was not seen as that much of a task. Automatically, Leicester City was almost seen as favorites at the Emirates.

The match started well for the away side, as Leicester went a goal up at the end of the first half, thanks to a goal from Jamie Vardy’s penalty kick.

Less than 10 minutes from the restart, Leicester’s Danny Simpson was sent off after receiving 2 yellow cards ten minutes apart.

Theo Walcott equalized for Arsenal 15 minutes after they gained their numerical advantage. Into the dying end of the game, Danny Welbeck scored a winner after Leicester’s Wasilewski gave away a free kick after a foul on Nacho Monreal. A perfect set-up for the Gunners.

Mesut Ozil delivery was placed perfectly for Danny Welbeck to pounce at it with his head. Arsenal had pulled ‘a double’ on Leicester. The only team to accomplish that record in the 2015/16 Premier League season

Despite being unable to win all three highly anticipated matches in February, the only match they lost went all the way to the dying minutes of the game, and the had to deal with the struggle of being numerically disadvantage.

Leicester City had passed another test.

The loss to Arsenal was the last loss Leicester City suffered on their journey to secure the Premier League trophy. In their final 12 matches, Leicester City won 8 and drew 4.

Towards the end of the season, Tottenham Hotspurs became their closest competition. On paper (and money), Tottenham looked like the stronger side. Tottenham waited for Leicester to make a mistake and slip up. Never happened. The team just didn’t have stage fright.

Next Season
As the new defending champions, Leicester City will be the first team to wear the league winner’s version of the new Premier League logo on their shirt.
They’ve added the Community Shield and the UEFA Champions League to their schedule.

From the odds they were given before the beginning of the season, no one has the right to make any predictions about Leicester City’s upcoming season. We will just sit back and watch the show.