Three of the top four teams played away and didn’t win. The three were the top three teams coming into the round.

The top picked up a point from a 1-1 draw in London; Tottenham away against Crystal Palace, while Liverpool against Fulham.
Chelsea were beating away at Everton.
Leicester won 3-0 at home.

Tottenham and Liverpool remained tied on points, while Leicester and Southampton got closer to them.

The Manchester Derby ended in a goalless draw at Old Trafford. Neither side did enough for any other outcome to be deserved.

Sheffield United will go into Round 13 without a win in the league.
Burnley used a win at the Emirates Stadium to move out of the relegation zone.
Despite holding Liverpool to a point, Fulham falls into the bottom three as Burnley’s replacement. 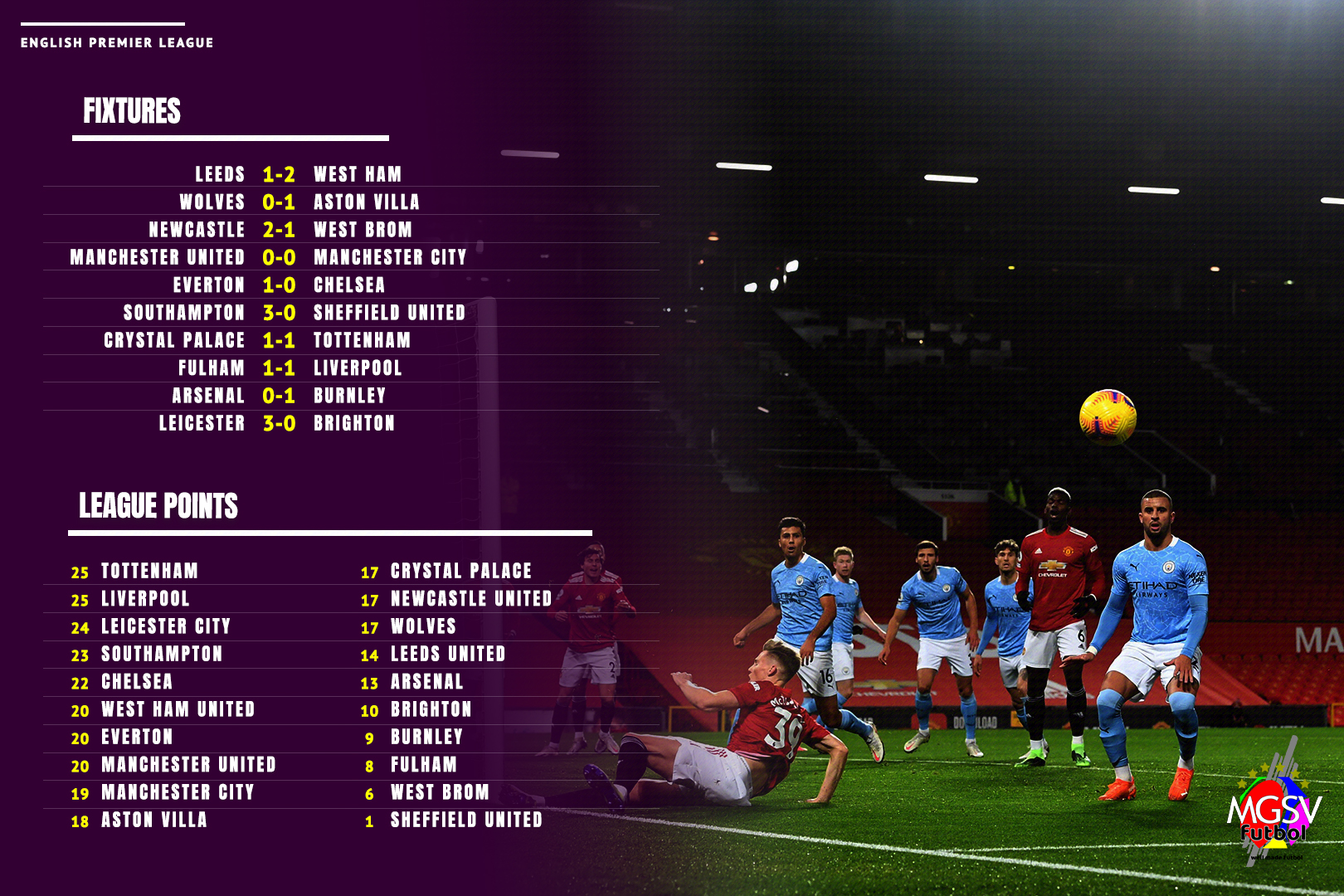 Early lead at home against West Ham didn’t stop Leeds from a consecutive league defeat. West Ham returned to their winning ways by bouncing from their defeat against Manchester United with a 2-1 win at Leeds.

After their match was postponed in the last round, both Aston Villa and Newcastle both returned to club football by securing a win.

A numerically disadvantaged Aston Villa side picked up an away win against Wolves; thanks to a late penalty that was converted into goal by Anwar El-Ghazi. Wolves also finished the game with a man sent off after Joao Moutinho picked up a second booking of the game.

Back to back wins for Newcastle in the league after Dwight Gayle’s 82nd-minute goal restored the lead Miguel Almiron had given the side inside the opening 30 seconds.

The Manchester Derby finished in a goalless draw.

Chelsea suffered a second league defeat after a 1-0 loss at Goodison Park. Gylfi Sigurdsson scored from the spot in the 22nd-minute to give Everton a lead that lasted all game. The defeat was the second defeat for Chelsea in all competitions.

Southampton bagged another three points with 3 goals against a Sheffield United side that remains winless since the start of the season. The result and other results from the round got Southampton into the ‘top four’.

Jeffrey Schlupp scored an 81st-minute equalizer for Crystal Palace to save a point at home against Tottenham.

Mohamed Salah converted from the penalty spot to save Liverpool from a defeat in London against Fulham.

Arsenal were reduced to 10-men and conceded a goal in the second-half to suffer their third successive league defeat; which marked a 4th straight home defeat in the league. Pierre-Emerick Aubameyang scored in the wrong goal to give Burnley their first win at the Emirates Stadium.

Three first half goals guided Leicester City to a win at home against Brighton. With the two teams at the top of the league dropping points, the win allowed Leicester to move a point from the top 2.