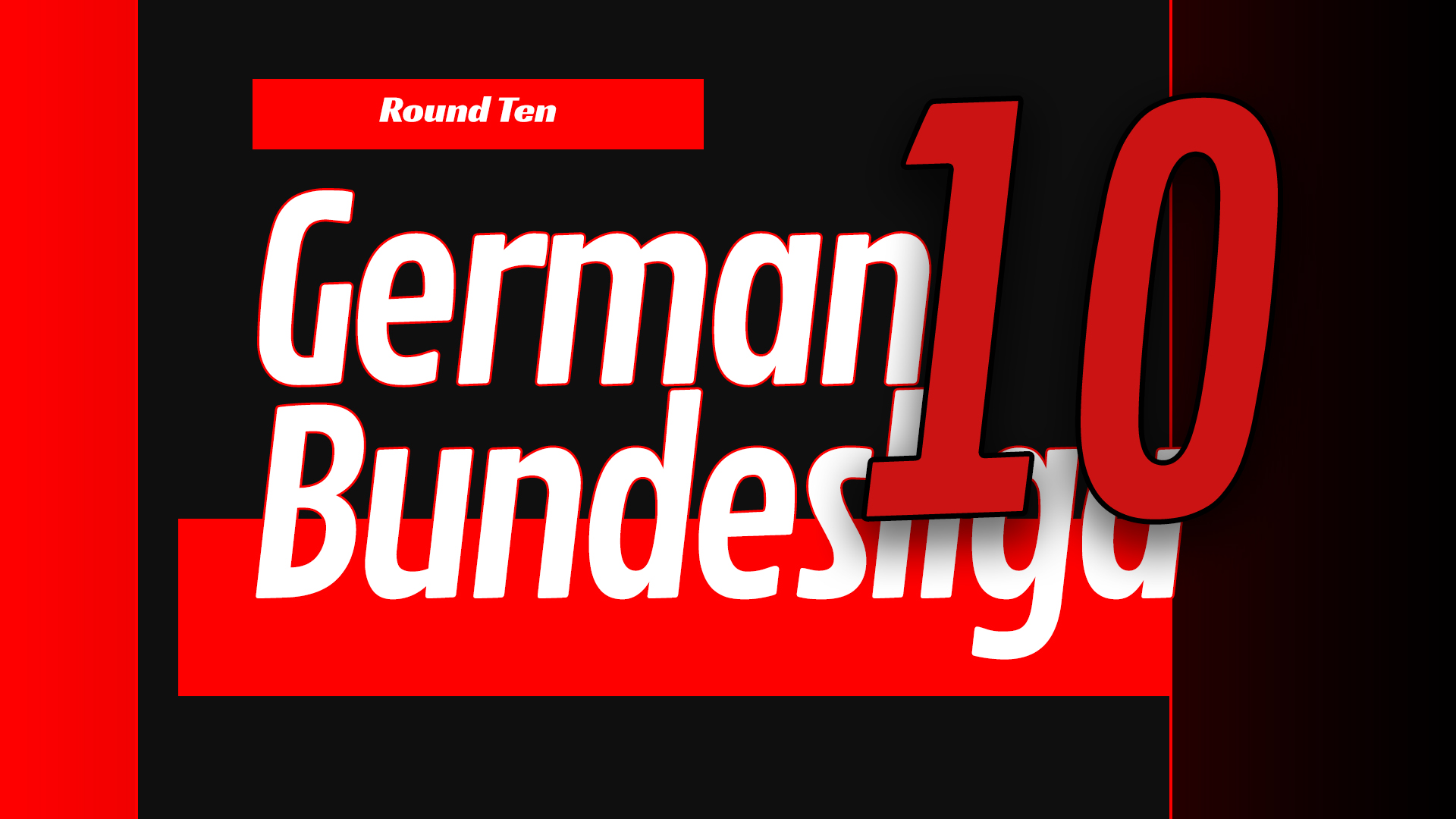 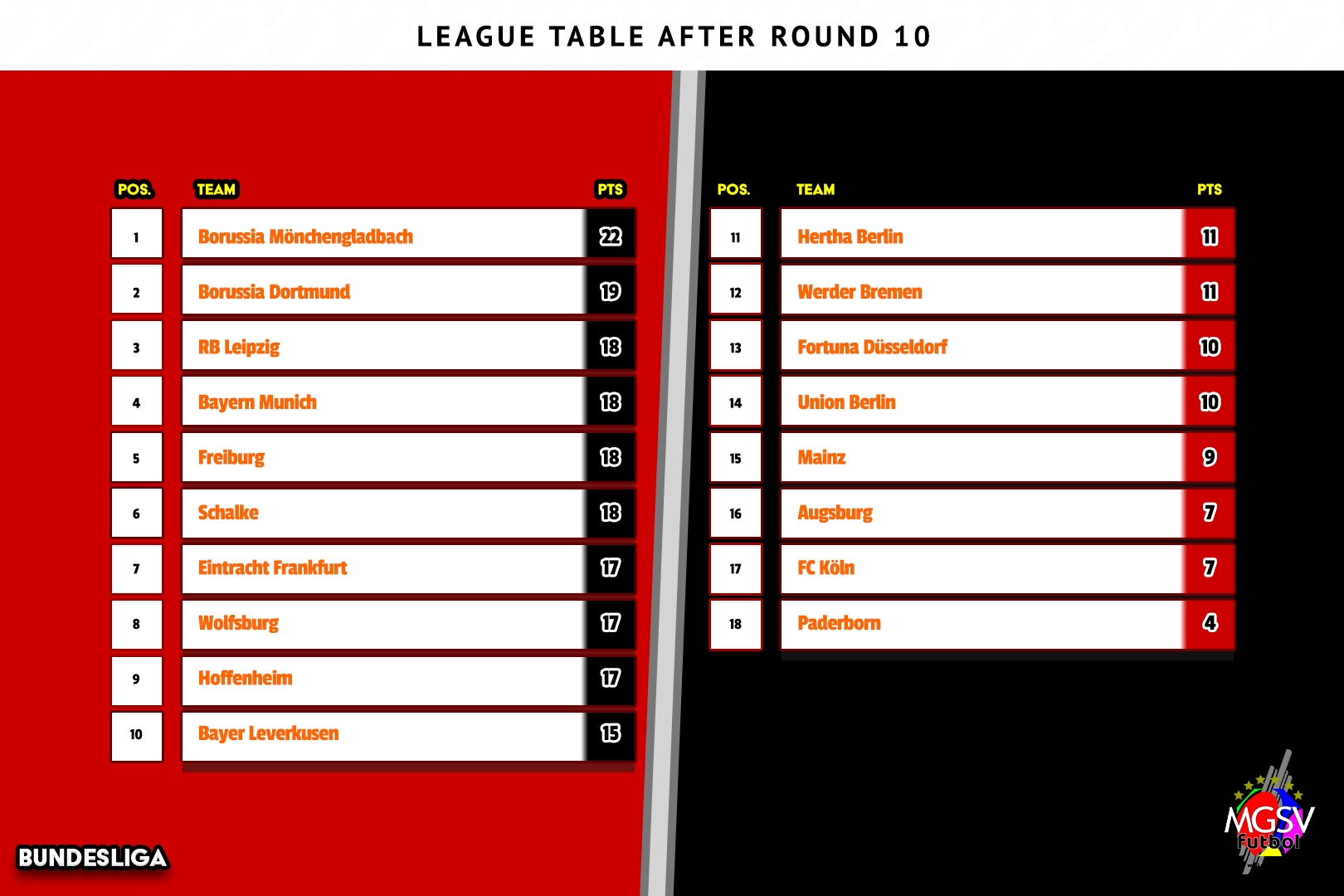 Borussia Monchengladbach is three points clear at the top of the Bundesliga with a congested race under them.

After 10 matches into the season,
Borussia Monchengladbach tops the group.
Bayern Munich is four points from the top.
Robert Lewandowski has scored in every round so far. – Top Scorer in the league with 14 goals.
Nico Kovac is fired from his post as Bayern Munich’s manager.
Bayern gets a beating from Eintracht Frankfurt.
RB Leipzig dismantled Mainz. 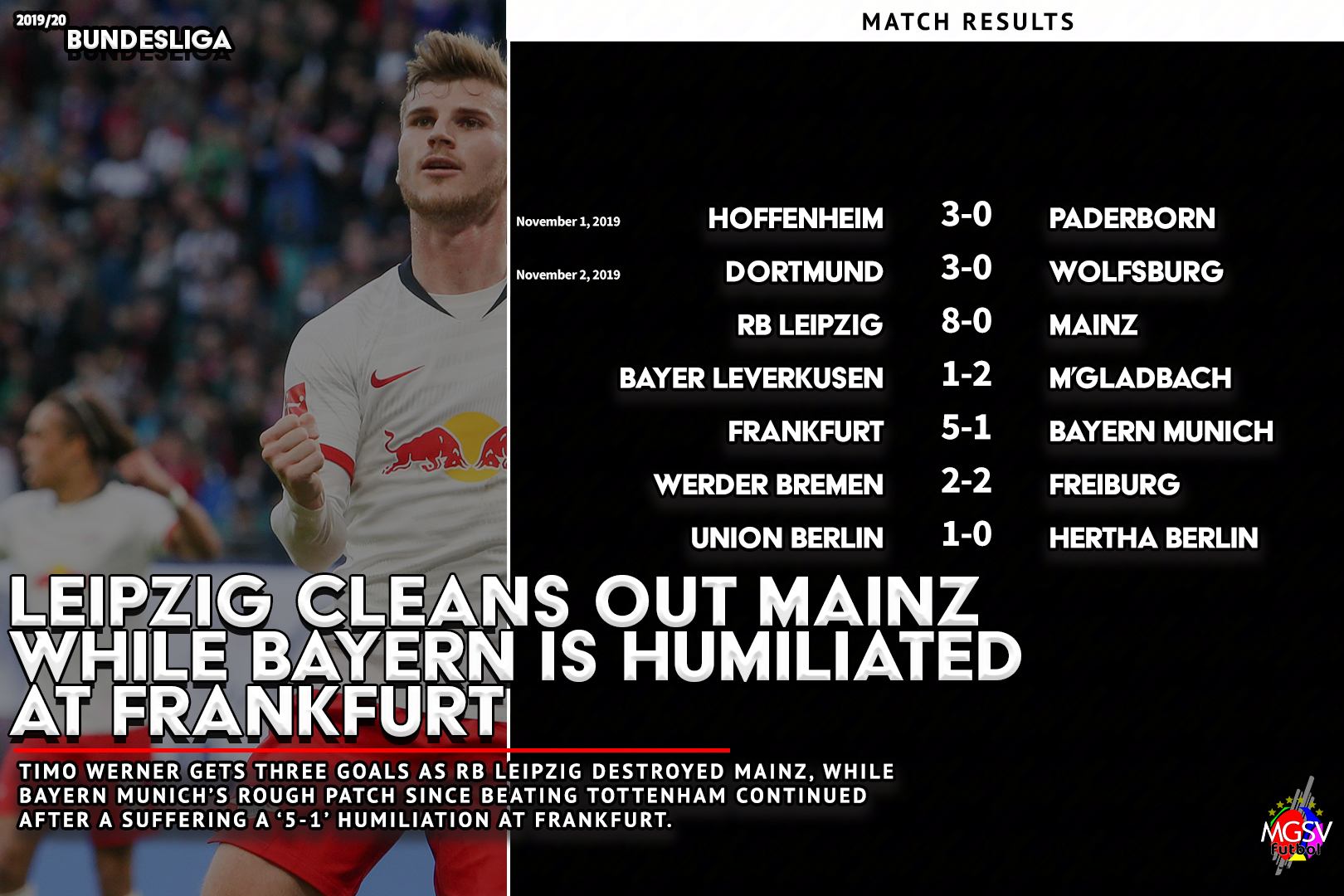 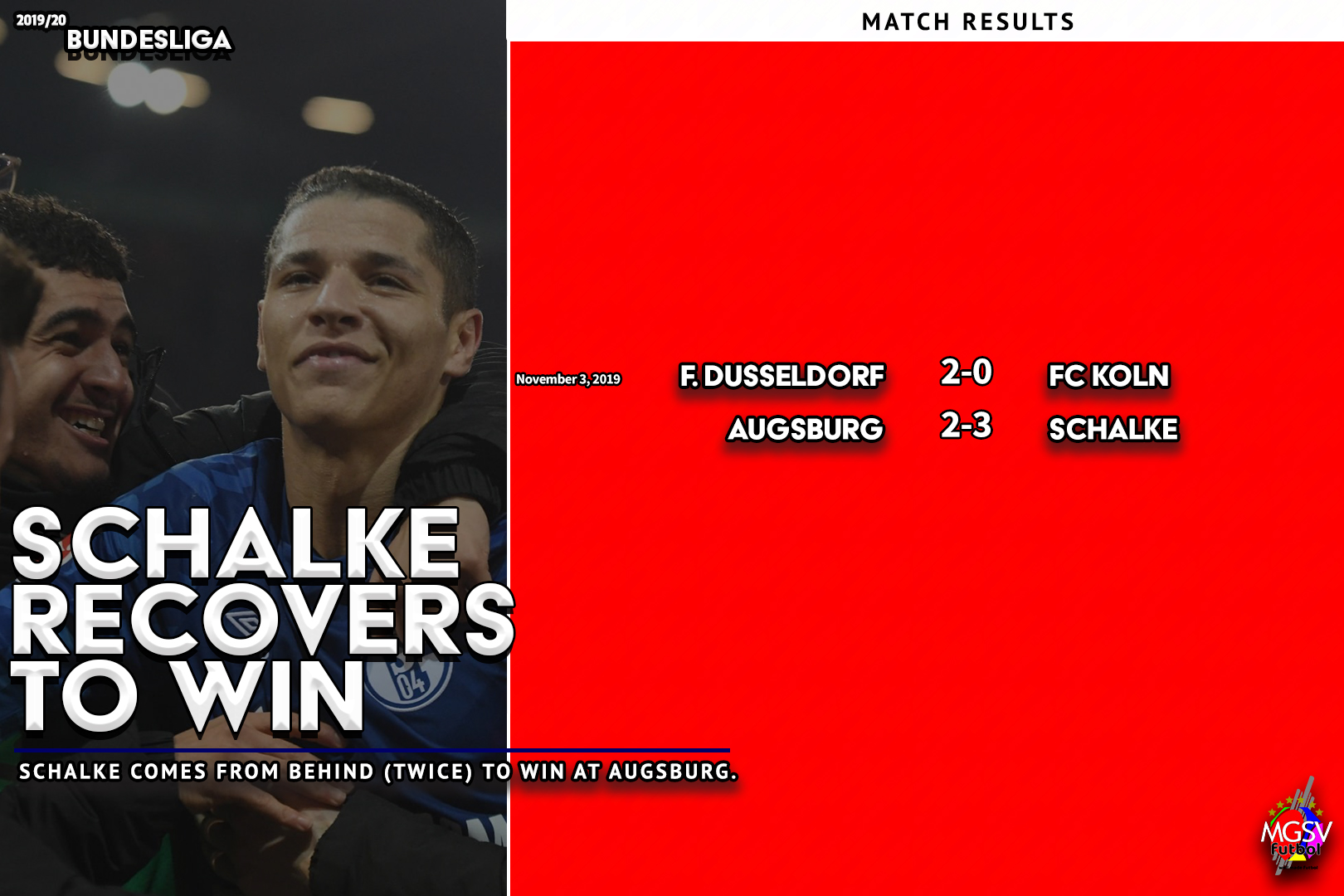 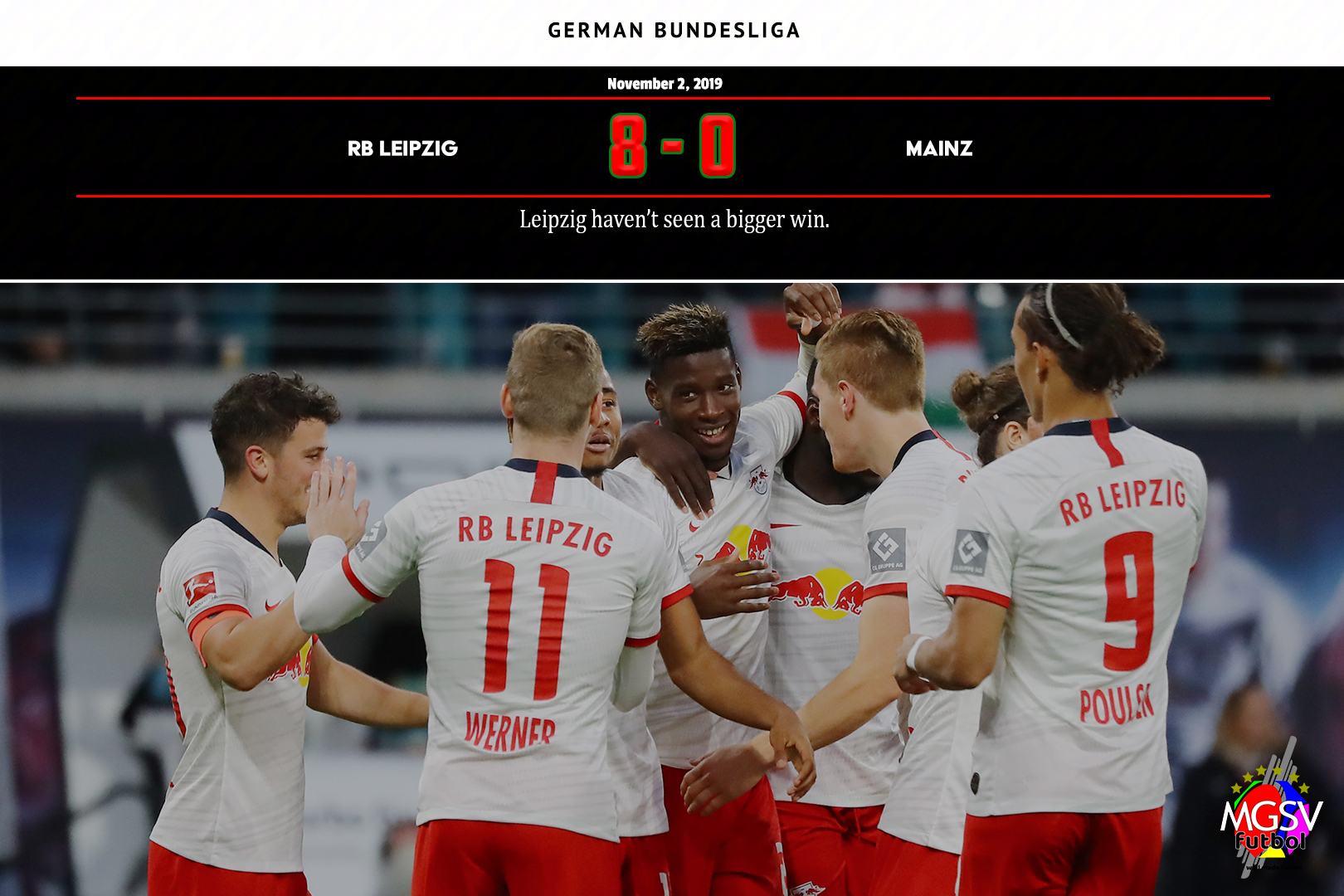 After getting their first league victory of the season in the last round, recently-promoted Paderborn returned to the losing ways after a ‘3-0’ defeat against Hoffenheim

After a goalless first-half, Dortmund rose up to second-place after knocking out Wolfsburg from the top four with three unanswered goals in the second-half.

Timo Werner scored 3 and assisted 3 as RB Leipzig got a historic ‘8-0’ win against Mainz.

Marcus Thuram finds scored the winning goal for Monchengladbach to remain at the top of the league table after getting an ‘2-1’ away victory against Bayer Leverkusen.

Bayern Munich humiliated in Frankfurt.
It’s not often that Bayern Munich comes apart and Eintracht Frankfurt took full advantage of it.
Bayern Munich went a man down after Jerome Boateng was shown a red card in the 9th minute.
For Bayern Munich, playing with a numerical disadvantage isn’t an excuse to be thrashed by any German side.
Bayern Munich is four points from the top of the league.”

Union Berlin win the derby.
Berlin is ‘Red’ after newly-promoted Union Berlin gets a late winner to beat Hertha Berlin.

Koln remains in the dropzone after a 2-0 defeat against Dusseldorf.

Schalke come from behind on two occasions to deny Augsburg a second win of the season.
Amine Harit scored the winner in the 82nd-minute to get the points that keep Schalke in the mist of the tight race.